Love in the time of COVID-19: ‘Not having sex is definitely frustrating’ 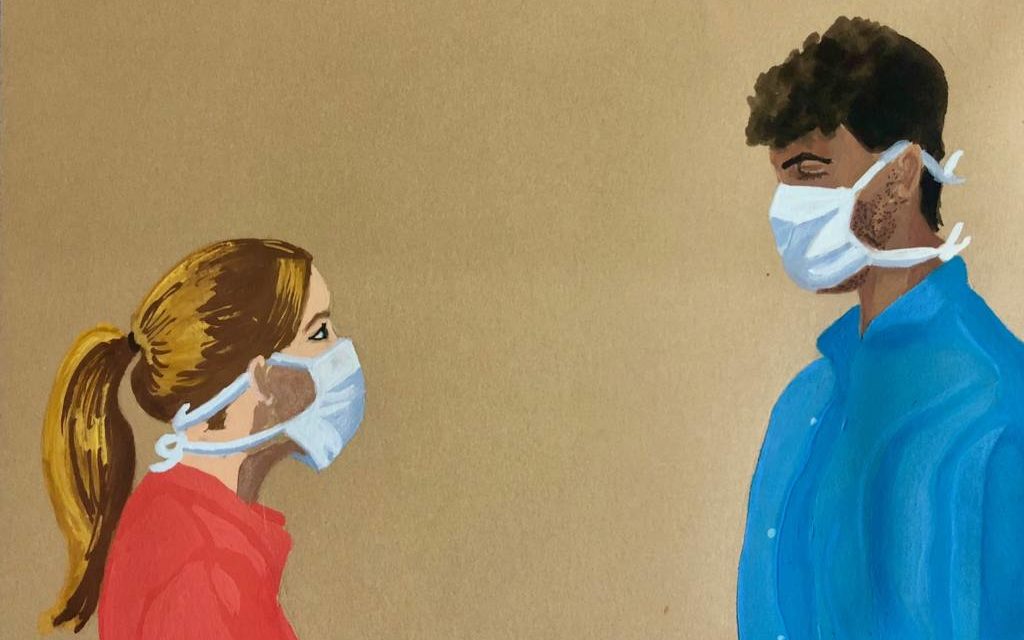 It was golden hour on Friday in Potrero Hill, and Joe and Katharine were sitting exactly six feet apart on the steps outside of her house. “She had intense red sunglasses on, a tan corduroy jacket, and a cocktail dress,” Joe recalled. She acknowledged the oddness of her outfit, but decided, why not?

The two have been dating for about five months. But that evening, they didn’t hug or kiss. “It’s considered too much of a contagion risk to let our two houses join together,” Joe said.

Indeed, Katharine lives in a house of four while Joe lives in a house of 10. House rules at Joe’s dictate that roommates don’t run between two houses. So his roommates have either gone to stay for the duration with their significant others, or had their significant others move in. But there’s a rub for Joe and Katharine: Their relationship has remained more or less clandestine, and completely moving into either house would be tricky.

So, for now, their trysts remain at a six-foot distance.

The COVID-19 virus has not only upended San Francisco’s economy — and perhaps our very notion of social stability — but also how people carry on their romantic lives. It has forced partners who live in separate households to make tough decisions: risk infecting two households, or go weeks, probably more, without the person (or people) who help us feel the least alone.

Some relationships, like Joe’s and Katharine’s, may remain at a distance. Others are breaking quarantine to be with their significant others. Yet others say the shelter-in-place order has forced them quickly to take the big step of moving in together and “define their relationship.”

A woman in her 30s who asked to go by “Liz” recently jumped into a relationship with a married couple. “We discussed it and kind of agonized over it last week — and decided to see each other yesterday for the first time,” she said on Friday.

One of her roommates was already inviting people over, so it was an “exception we were willing to make.”

Plus, “I feel like if you said, ‘No, let’s not see each other’ — that might be the end of the relationship. I think it’s worth taking that risk.”

Others said the stay-at-home orders have accelerated their relationships.

“If we were going to do it, we had to do it fast,” said Anna, a 27-year-old software engineer, whose boyfriend had plans to move in with her sometime this spring. When news broke of the distancing measure, those plans accelerated.

“Living together is a big step, a test of a relationship,” she said. “It’s going to solidify that it’s fine — or make it clear that’s not fine, quickly.”

Matt, one of Joe’s roommates, also went quickly from dating to sheltering in place with his girlfriend. They’ve even announced the relationship to their parents. “It was time for that anyway,” Matt said.

After the order was announced, a UC Berkeley student who asked to go by “Miguel” told his girlfriend of six months, “If the bridges get shut down, I’ll just go around the Bay Area to get to San Mateo.” The bridges haven’t shut down yet, and as of Friday, he was staying with her at her parents’ house in San Mateo. Skateboarding is for lovers. Now, they must decide whether to ride six feet apart.

Online daters find themselves in perhaps the biggest crunch.

A 27-year-old data analyst who asked to go by “Jeremy” said that, before the shelter-in-place order, he saw someone four to six times a week in some kind of “dating capacity.”

“In normal times there is either implicitly or explicitly more expectations around the frequency of when to see each other,” he said. “In a world in which you can’t see anyone, that expectation disappears.”

Before the lockdown, he was “actively seeing or hooking up with” 10 different people. Now, in the time of COVID-19, he said, “varying degrees of maintenance apply to these people.”

That means a lot of texting, he said, and a phone call here and there. A “COVID-19-safe hike” was not out of the cards. In the end, however, “not having sex is definitely frustrating.”

A 26-year-old woman who asked to go by “Bailey” currently has 12 active conversations on the dating app Hinge. “I feel like I’ve blown off a couple people because they’re still trying to meet up,” she said.

But she feels like she’s having meaningful conversations with the others. Often, she said, they talk about how they’re spending their days at home. She’s had a couple of video dates, and, not having to be face-to-face with people has actually taken some of the pressure away.

“There’s nothing to risk, because you’re not in front of them,” she said.

Erin, 34, split up with her boyfriend in early January. Just after she started using a dating app, the virus hit. “It definitely changed the dynamics,” she said, noting she currently has 10 people in her queue. “Most people are very chatty. Most people are at home and respond very quickly, which is not usually the case.”

Already, people have asked her on phone or video dates. One guy even asked her on “a walk with a six-foot distance.”

She said being exclusively online with no prospect of a first date is likely to cause her current conversations to “fizzle.” But she does have a phone call set up for sometime soon.

“I don’t think there’s a super great way to have a date this way,” she said, but “it sure can happen.”

Abigail, a 35-year-old career coach, met Michael in late January, when the coronavirus was ravaging China, but a more or less obscure headline here in San Francisco. They hit it off — big time. Now, after only six weeks, she’s completely moved in with him to shelter in place.

“The joke is: If we can shelter in place together, we can make it work — but if not, we can part ways with a funny story,” she said.

Asked if she’s found her soulmate, Abigail simply replied: “It feels we’re both in the right place at the right time.”