Several companies subpoenaed today by the San Francisco City Attorney for allegedly funneling money through Lefty O’Douls to fund a 2017 Public Works holiday party also did so for a Public Works party held only two months ago, according to an invoice obtained by Mission Local.

The invoice reveals that Webcor Builders, Pankow Builders, Clark Builders, and waste management company Recology — which all have contracts with the city — donated some $33,000 to LOD Ballpark Buffet LLC for food and other consumables for a 2019 Public Works party in December.

Contractors do not have the carte blanche right to donate money to the departments or entities granting them contracts. Such donations must be publicly disclosed and, if exceeding $10,000, require Board of Supervisors approval. The invoice would appear to record dubious financial donations, in writing.

The LLC is headed by restaurateur Nick Bovis, the owner of Lefty O’Douls, who, along with former Public Works Director Mohammed Nuru, was arrested by the FBI last month. Both men face lengthy prison sentences on fraud charges if convicted.

In a joint investigation with the city’s controller’s office, the San Francisco City Attorney today subpoenaed eight companies and nonprofits that it believes “were involved in funneling donations to fund City programs and events, including funding Public Works holiday parties.” 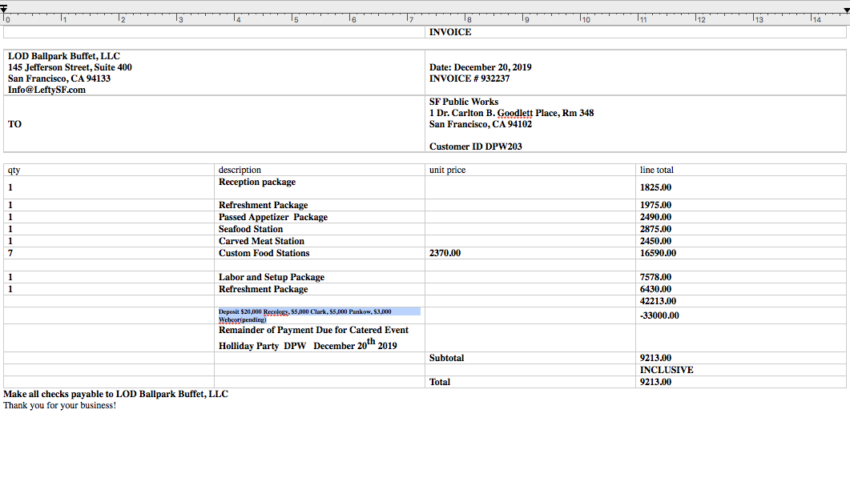 Those companies include Webcor, Pankow, Clark and Recology. Also subpoenaed were PG&E, the San Francisco Parks Alliance, the San Francisco Clean City Coalition — and Lefty O’Doul’s Foundation for Kids, a youth baseball charity that the San Francisco Examiner reported was the conduit for thousands in donations to fund a $30,000 Public Works holiday party in 2017.

The most recent invoice obtained by Mission Local is from 2019, however. And it shows that Lefty O’Doul’s Ballpark Buffet provided seafood, “carved meats,” and other appetizers and refreshments to Public Works employees to the tune of $42,213.

“Make all checks payable to LOD Ballpark Buffet LLC.” reads the invoice. “Thank you for your business!”

Bovis and Nuru were arrested by FBI agents on Jan. 27.  Within a 75-page complaint unsealed on Jan. 28, five “schemes” are alleged.

Nuru and Bovis are facing 20-year prison sentences for “the airport scheme,” in which they allegedly attempted to bribe an airport commissioner with an envelope stuffed with $5,000 to land a chicken shack at San Francisco International Airport. Nuru is facing five additional years of incarceration for allegedly lying to the FBI. He was initially arrested on Jan. 21, but released after purportedly promising to cooperate with the long-running investigation and keep quiet about its existence.

He is accused of doing the exact opposite of that, and then denying it to FBI agents.

Mission Local was unable to reach Pankow or Clark. A Recology spokesman said the company is internally investigating: “As Recology’s investigation is just beginning, we do not have any comment at this time.”

Webcor spokesman Sam Singer provided a thank-you note indicating that the company donated $3,000 only days prior to the Dec. 20 invoice to Bovis’ charity; Singer stated that the money may have been shifted to the Ballpark Buffet — and Public Works holiday party — without Webcor’s knowledge.

“Our belief was it was 100 percent to help kids,” Singer said. 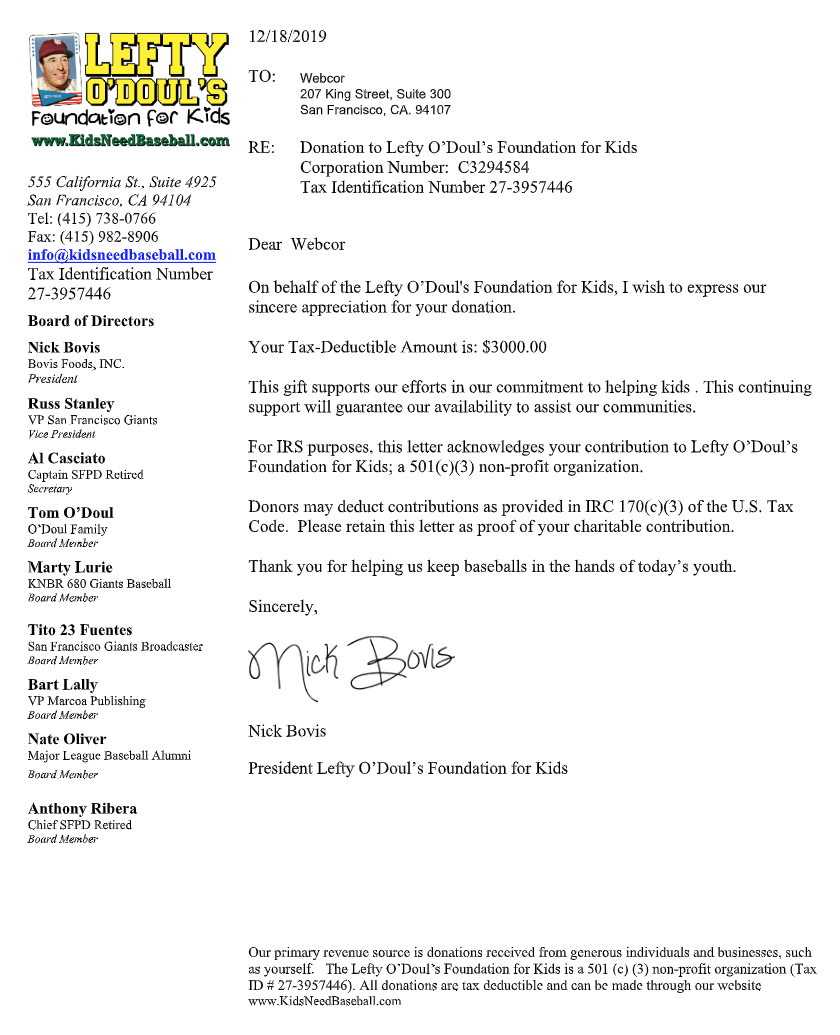