L’affaire Mohammed Nuru: Is San Francisco a dysfunctional government — or a functional cartel? Time to choose. 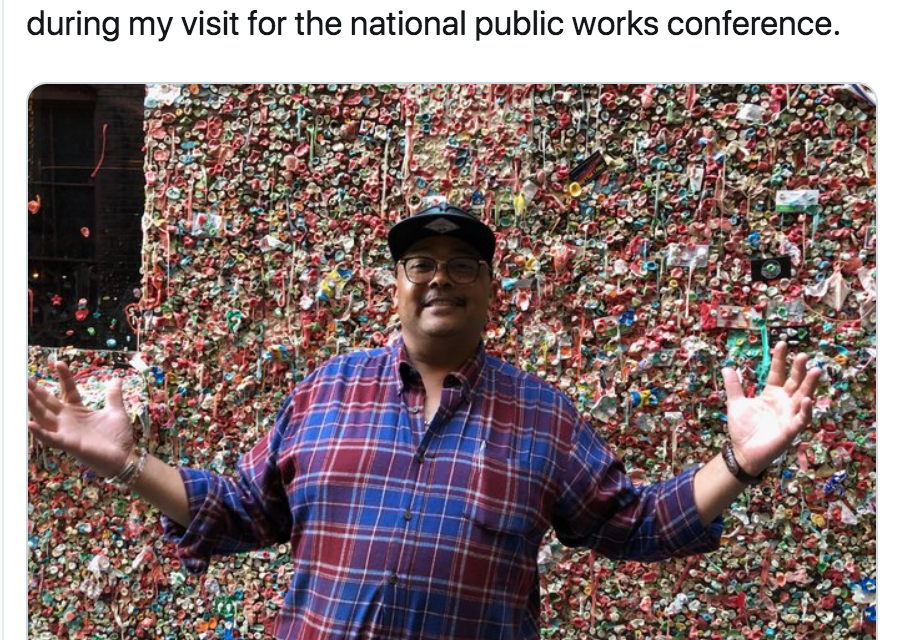 “See, the problem in San Francisco too, the politics are just crooked, you know what I mean? And they can go sideways. They even undermine the people in charge.” —Nick Bovis, allegedly, on a wire.

A few years ago, your humble narrator and Rose Pak came across a pile of detritus dumped on a Chinatown street corner. This would not do. She whipped out her cell phone, dialed Public Works Director Mohammed Nuru, and the mess was cleaned in short order.

That’s what Mohammed Nuru did — along with, per a 75-page federal complaint unsealed yesterday, many, many other less savory things: In summation, rampant public corruption.

Yesterday things went sideways — and undermined the people in charge. It was revealed that there was gambling going on in the casino — and nobody but nobody should’ve been shocked, shocked. When a 75-page federal complaint and joint U.S. Attorney-FBI press conference prompts newspapers to reprint Nuru’s lengthy C.V. of ethical breaches, readers and journalists alike can question how the hell he got this job.

But that’s missing the point. That C.V. got him this job. And his ability to field phone calls from the city’s power players and solve their problems expediently kept it for him.

This is the third time we’re reporting this, but it seems warranted: Multiple sources this month confirmed to Mission Local that Nuru’s Public Works cleaning crews showed up ahead of time to spots on the mayor’s daily itinerary, and power-washed them before she arrived.

Several outrage cycles ago, residents of the San Francisco side street Clinton Park placed boulders on the sidewalk — sans any permitting or municipal permission — to deter homeless campers or alleged dope-dealers. Incensed homeless advocates repeatedly rolled the boulders into the gutter. And Nuru’s Public Works crews saw fit to spend time and money repeatedly hoisting the outlaw emplacements back onto the curb. The real problem, in Nuru’s own words, was that “larger boulders” were required.

Mohammed Nuru was the larger boulder. He was hard and blunt and able to “solve” problems in a quick and unsophisticated manner. Or not solve them. Depends who called.

Those boulders served as a clumsy metaphor for life writ large in this city. And, now, so does Nuru. 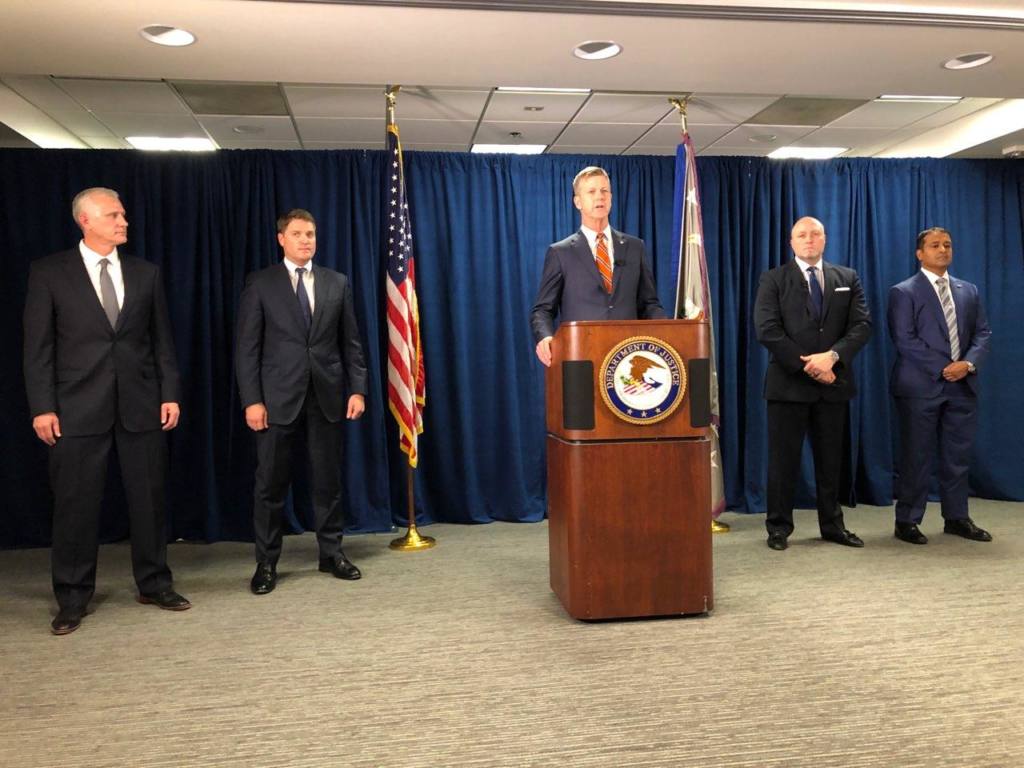 U.S. Attorney David Anderson addresses the media on Tuesday regarding charges filed against Mohammed Nuru and Nick Bovis. He is flanked by U.S. Attorneys to his right, and FBI agents to his left. To Anderson’s immediate left is FBI Special Agent In Charge Jack Bennett.

The FBI and the US Attorney’s office spent an awful lot of time and money busting up a conspiracy to bribe an airport commissioner $5,000 to open up a chicken shack at SFO.

A conspiracy that did not, it turns out, come to fruition.

San Francisco considers itself a sophisticated city, but this is what our highly compensated public officials get caught doing on federal wiretaps.

Per the complaint, Nuru was also bribed with a tractor.

And there is a lot of material in this federal complaint, even if the fraud charges that could put away Nuru and restaurateur Nick Bovis for 20 years are jarringly small-time: A chicken shack at the airport; bid-rigging an outhouse contract; having city-employed contractors working on your dacha (and gifting you a John Deere tractor).

But it’s not the plot. It’s the scenery. An atmosphere of casual corruption is revealed here, and as US Attorney David Anderson noted yesterday, the unnamed players — CONTRACTOR 1, DEVELOPER 1, even GIRLFRIEND 1 — will recognize themselves.

Anderson urged them to “run to the FBI offices and disclose what they know. Or we’ll do it the other way.” (Actually, Anderson said “walk, don’t run,” which may have been a misstatement or may have been an acknowledgement that it was rainy and slippery on Tuesday. Whatever).

Nuru, it seems, is up to his neck in a pile of the stuff that so delights FOX News. As revealed yesterday, he was first arrested on Jan. 21 — and promised to cooperate with the broad, long-running investigation and keep its existence secret.

But this did not happen. Per the feds, Nuru did the opposite and began informing people about the baited trap. The feds are angry, and one of the implicit rationales for yesterday’s press conference was to impart that message to CONTRACTOR 1 and DEVELOPER 1 and all the rest.

The feds hoped to use Nuru as a Trojan Horse to ensnare more and bigger players in one neat move. But it seems he ruined this plan, and now they have to make case after case. Not only is he facing 20 years for alleged fraud, but five more for purportedly lying to the FBI about spilling the beans — a preposterous thing to do, considering Nuru was so wired up the FBI probably knew how often he went to the john.

Nuru is a good soldier. But 25 years is a lot of leverage. It will be interesting to see how hard the feds want to pull this thread. Because if they pull hard enough, they’ll unravel the whole sweater. 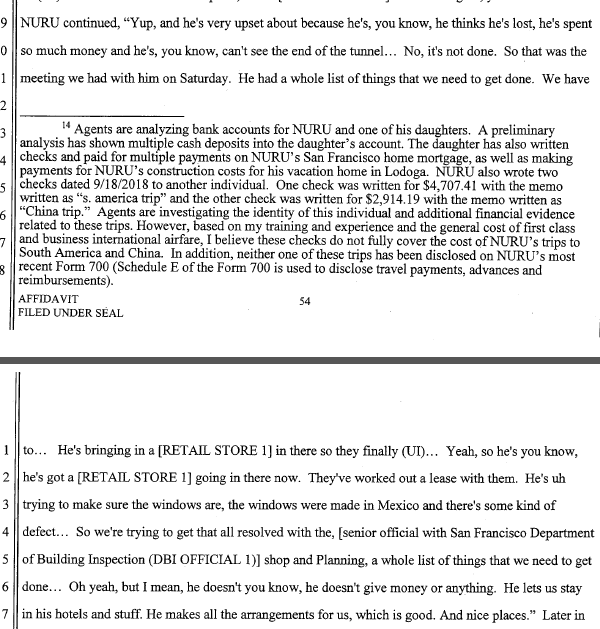 Some of you may recall those old Dianetics commercials, in which all of life’s problems were rattled off along with corresponding page numbers in which they were addressed (What causes negative thinking? Page 72).

The complaint against Nuru and Bovis is a bit like that. Who’s the Chinese billionaire who wined and dined Nuru and purportedly received behind-the-scenes help on a project in San Francisco? Page 55.

So, let’s take a look at Page 55, which is pasted above. What project might that be? And what did Nuru do to help the man who, per a wiretap of his call to “GIRLFRIEND 1” gifted him “some stone” (uncut stones? Perhaps the feds know) and thousands of dollars worth of booze.

A bit, it seems. Your humble narrator has learned from numerous sources that the project in question is at 555 Fulton St. That project is being undertaken by the Chinese-owned development outfit  Z&L Properties. Searching on city websites, it seems that there are no records for some of the work being described in the federal wiretap — and, importantly, that other work appears to have been done “over the counter” when far more extensive time and observation should have been required.

We are informed by numerous sources that the permitting for this project was handled by expediter Walter Wong. Connecting the dots, that would make Wong “CONTRACTOR 2.”

A call to Wong’s office rang about seven or eight times this morning before a woman picked up the phone. She said she had “nothing to say” about Wong’s alleged appearance in the complaint.

She also refused to confirm whether the FBI raided Wong’s office yesterday — as multiple sources have told us they did.

There is something akin to this to be discovered on nearly every page of the complaint.

If and when Nuru decides to belatedly assist the authorities — or if those named within run, walk, or otherwise perambulate to the FBI offices — the guessing games will cease. Over the past few decades, Rose Pak, Willie Brown, and others have successfully seeded the government with legions of people, targeting the departments where things can be either done or undone. This has proven a highly effective way for a coterie of people to remain influential.

Mayor London Breed — who, herself, comes from this political world — has been handed a golden opportunity to undo the status quo in this city. If that’s what she wants to do. Rather, minimizing change and containing damage may be the preferred outcome here.

Nuru has been placed on leave. Under Breed, former Health Department boss Barbara Garcia has resigned while under investigation for purportedly steering contracts to her wife, and erstwhile Muni head Ed Reiskin has stepped down after a litany of missteps including knowingly kneecapping the entire transit system and failing to tell the mayor’s office about it. Joanne Hayes-White also retired, after a lengthy tenure atop the fire department — and Public Defender Jeff Adachi died. Otherwise, however, the city’s cards have not been shuffled.

But the sheer mass of information disgorged by the feds yesterday indicates that there’s much more here — and ferreting out clandestine tractor gifts and chicken shack bribes isn’t the ultimate goal. Nailing the director of Public Works doesn’t appear to be the ultimate goal, either.

Nuru is, among other things, the living embodiment of business as usual in this town of ours. That may change, but that may not.

Because, in truth, things didn’t go sideways yesterday. They went sideways long ago. And everybody knew — everybody. And they did nothing.

They undermined each and every one of us.