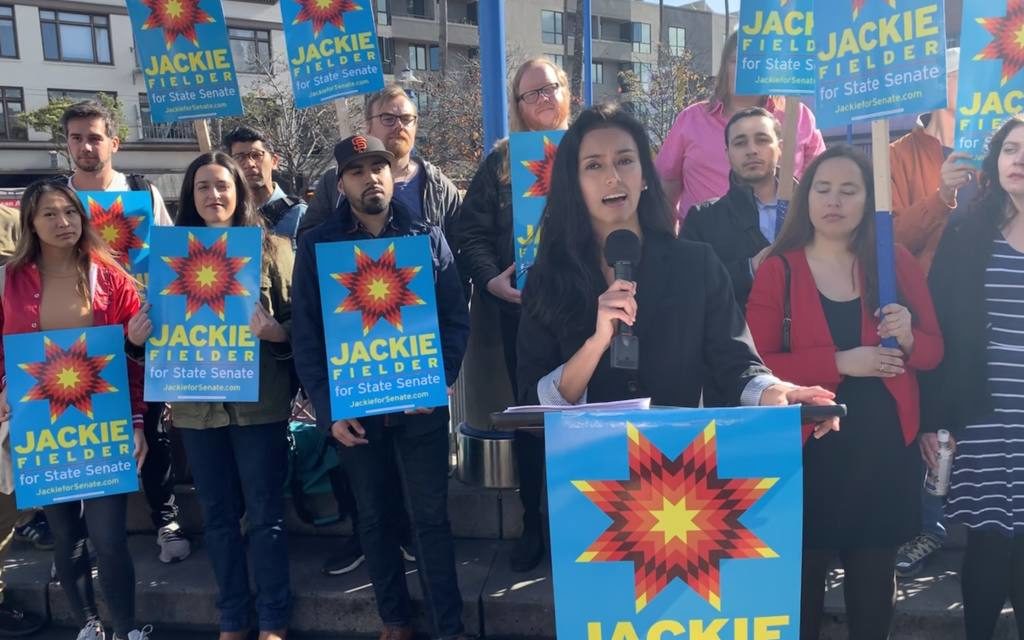 State senate candidate Jackie Fielder on Wednesday announced a housing plan that drew a sharp contrast to the policies of the incumbent she’s running to unseat. It focuses on the production and preservation of affordable housing, instead of the streamlined construction of dense, market-rate developments.

Sen. Scott Wiener “has stood by the conservative economic framework that we can simply build our way out of the housing crisis,” Fielder said, standing among some two dozen supporters at the 16th Street BART plaza at noon.

By contrast, the 25-year-old Fielder laid out a platform, called “California Homes For All,” which emphasized that “housing is a human right.” That notion, she charged, has been lost on city politicians who have “welcomed real estate development with open arms.”  She called Wiener the “most real estate-backed politician sitting in the California state legislature.”

Meanwhile, “thousands of working-class people and people of color are being evicted out onto the street without just cause,” she said. “And that’s why I’m running to replace him.”

Fielder entered the race in December, a spur-of-the-moment decision prompted by the fact that Wiener was running virtually unchallenged. She’s a Stanford graduate and a public banking activist; she now lives with roommates in the Mission but, previously, slept in her minivan or on friends’ couches.

Although Fielder’s noon announcement on the plaza remained sedate — with absolutely none of the plaza’s everyday crowd of homeless and low-income denizens moving to observe Fielder’s speech — Fielder has the weight of San Francisco’s progressive establishment behind her.

But the bill remains controversial. The progressive-led San Francisco Board of Supervisors in December passed a resolution by a 10-1 vote that opposes the legislation without significant amendments. As this is Wiener’s third attempt at passing the law, Fielder said SB 50 is on its “last legs.”

The bill must pass out of the senate by a full-floor vote by Jan. 31 or “the life of this particular bill is over,” said Catie Stewart, a spokeswoman in Wiener’s office.

Despite the do-or-die scenario, Wiener himself refuted the notion that SB 50 is on its “last legs.” He said the bill has “diverse support” in the legislature, having passed out of two committees on “almost unanimous bipartisan votes.” Wiener also cited a  surge of support from cities like Albany and Milpitas “coming in just last night.” “I’m cautiously optimistic about the bill’s future and happy about the support we’re gaining,” he said.

Fielder nonetheless believes her approach will be more effective.

“We need to build for need — not for profit,” Fielder said on 16th Street Plaza. “And with the fifth-largest economy in the world, with 157 billionaires worth more than $700 billion combined, California has all the resources we need to do more.”