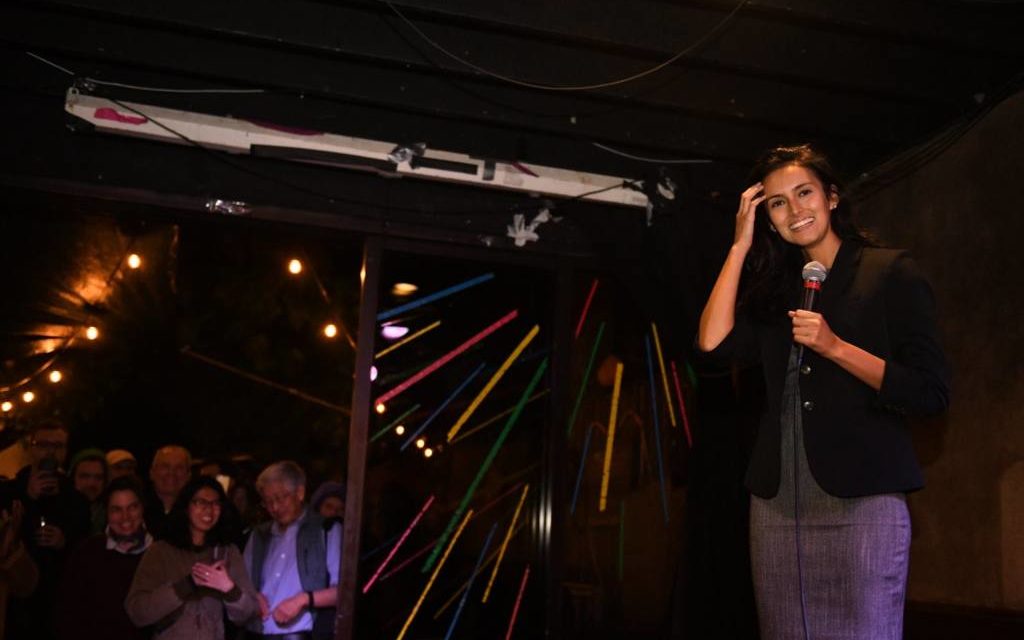 Standing beneath a tarp as rain poured down on the back patio of El Rio Friday night, state senate candidate Jackie Fielder introduced herself.

She’s 25 and of Mexican and indigenous (Lakota and Hidatsa) descent. She’s a lecturer at San Francisco State University’s ethnic studies department. To supplement her income, she’s served at restaurants and tended bar. When she’s not crashing on her friends’ couches, she’s sleeping in her 1994 Toyota Previa minivan. She’s also openly queer and a member of the Democratic Socialists of America.

And, as of two weeks ago, she’s the progressive challenger for state Sen. Scott Wiener.

“Literally, two weeks ago, I wasn’t planning to stand on any stage” as a candidate, Fielder told her audience of more than 100 huddled in the bar’s back room during a 15-minute speech. But “I looked at the fact that we have an incumbent who is not being challenged.”

The primary election is three and a half months from now, on March 3 — the same day Californians will flock to the polls to choose the Democratic presidential nominee. Fielder had no choice but to run, she said — despite the fact that she’ll be running as an underdog.

But Fielder’s character profile, her story, and the fact that she’s taking on Wiener, whose second term was a foregone conclusion before Fielder entered the race, has energized San Francisco progressives, with many drawing the comparison to Rep. Alexandra Ocasio-Cortez (D-NY), the millennial-aged Latinx Democratic Socialist who herself upset a powerful incumbent in 2018.

“I feel like Jackie is our AOC,” said Sam Lew, a policy director at the Coalition on Homelessness who managed the successful 2018 Prop. C campaign, a homeless funding measure and a major progressive victory.

“Both are young and taking on incumbents who have huge power,” Lew added. Both “have very progressive leftist agendas that young folks, communities of color, and marginalized communities want to see and need to see in order to survive.”

Hae Min Cho, the co-chair of the San Francisco Democratic Socialists of America electoral committee, first encountered Fielder a year ago when Fielder was making a presentation to the Rose Pak Democratic Club about public banking. “She really had such a fire in her … to create justice around finance,” Cho said. “It really struck me and I thought … this woman needs to run for office.”

Cho also compared Fielder to Ocasio-Cortez, often referred to as AOC, although “AOC had two years for organizations to knock all those doors,” Cho said, noting that Fielder has three months. But “I believe everyone’s going to get behind her candidacy — she’s just going to sweep it.”

Kaylah Williams, who managed District Attorney-elect Chesa Boudin’s upset victory and is herself seen as a rising star in progressive circles, also referred to Fielder as “our AOC.”

Williams said the time is right for Fielder. “What puts Jackie in a great position is that she is coming right after this huge win with Chesa and with Dean,” she said, referring to the victories of both Boudin and District 5 Supervisor-elect Dean Preston, who narrowly overcame Supervisor Vallie Brown in November.

Williams said that both Boudin and Preston had large networks of volunteers in San Francisco that mobilized for those candidates — and they were excited to see change.

“So I think it’s going to take her tapping into that and keeping those people excited,” Williams said, noting that fundraising was also key.

Sen. Scott Wiener will be a formidable opponent for Jackie Fielder. Photo by Abraham Rodriguez.

Fielder will need it. Scott Wiener served on the San Francisco Board of Supervisors for five years before being elected to the state senate in November 2016. He now chairs the state senate’s housing committee, and is a prolific legislator and tireless retail politician. He also has big money behind him: In his three years as a senator, he’s reaped around $2.8 million in donations — a lot coming from building, real estate, and law enforcement groups.

Jason McDaniel, a political science professor at San Francisco State University, agreed Fielder has many AOC-like characteristics: both are young, talented organizers with a good media presence and clear progressive agendas. “But there’s no reason to compare Wiener to Joe Crowley,” he said, referring to the 10-term U.S. representative whom Ocasio-Cortez upset in 2018.

Crowley “had been there 20 years and had not evolved with the district, both demographically and ideologically,” McDaniel said. “Wiener was just elected [three years ago] and faced a tough opponent” — Jane Kim — “and is not out of line with the district.”

Wiener is also, unlike Crowley, an energetic and active politician and legislator.

“There’s a path for Jackie Fielder — it’s just a very narrow one,” McDaniel said, noting that he has a lot of respect for Fielder. “Even if she runs a perfect campaign, Wiener is going to be very difficult to beat.”

Wiener, for his part, said he didn’t know Fielder well, but said, unlike Crowley, “I’m very much here and involved in many local and neighborhood issues. This is my city of 23 years and I love it like a family member.”

And he is happily accepting Fielder’s challenge. “This is a democracy and everyone is entitled to run, and no one is entitled to a free pass to re-election, myself included,” he said. “It’s on me to make a case to voters about why they should re-elect me.”

Wiener said, in his three years in the senate, he’s authored 36 pieces of legislation into law, including the state’s net neutrality law, a law that streamlines affordable housing production, and a law that protects sex workers from arrest if they report certain crimes. “I’m proud of that work,” he said. “I’m one of the most progressive members of the legislature.”

Still, the city’s progressive wing has, so far, not been impressed by some of Wiener’s other initiatives. There’s SB 40, a law passed in October that allows courts to compel certain mentally ill people into treatment. There’s also SB 50, a proposed law that would ease local restrictions regarding housing production near transit lines. It would greatly reduce the ability of communities to block those projects.

“The experience Scott Wiener has is how to establish larger forms of wealth distribution to the top and trickle-down economics to the bottom,” said former Supervisor John Avalos, one of Wiener’s political foils, when asked about Fielder’s lack of experience compared to Wiener, 49.

Fielder earned a B.A. in public policy and a master’s in sociology, both from Stanford University. She told Mission Local that she studied under the tutelage of professors at Stanford’s Hoover Institution, a conservative think tank: “However, I have my own take on economics and I don’t think the market will save us.”

That much is clear: Fielder’s crowning achievement, so far, has been her work around passing AB 857, which clears the way for cities to establish public banks — financial institutions that lend at low interest rates for affordable housing and infrastructure projects.

“I am also working with legislators to pass a bill that would make San Francisco first in line to establish our own public bank — the first in the country to do that,” she said.

Fielder raised $25,000 within the first 12 hours of launching her campaign Nov. 25 — all from individual donors, according to Julian LaRosa, Fielder’s campaign coordinator. He would not reveal how much Fielder has raised since then, and said the campaign will make that announcement at the filing deadline in January.

Preston, the supervisor-elect, said Fielder’s inexperience relative to Wiener’s, and the fact that she won’t take corporate donations, can be a strength.

“We need leaders who are free of those influences,” he added. “That’s exactly what Jackie represents.”

For her part, Fielder told SF Weekly, “I am definitely not the next [Ocasio-Cortez], I am me.”

But she wouldn’t mind a similar storyline. “We absolutely are riding a wave,” she told Mission Local. “And I intend to ride that and make sure that people know that we don’t have to compromise our values just because life is hard.”