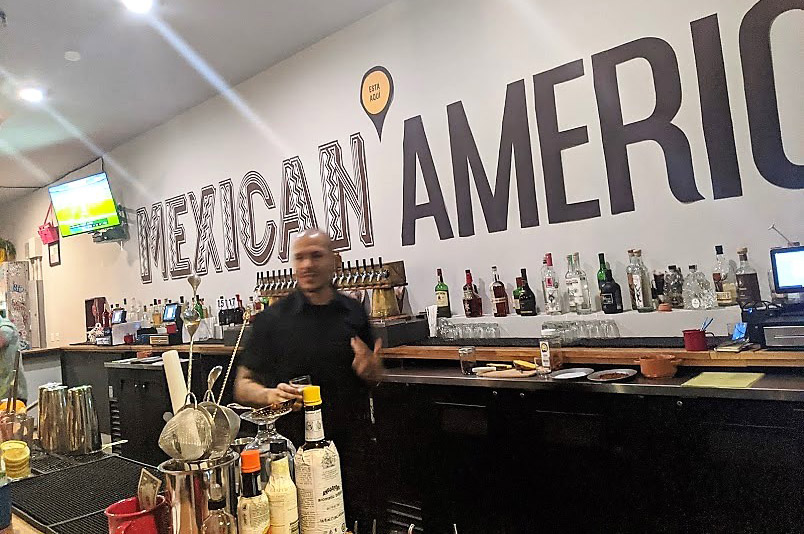 We’ve added yet another brewery to our neighborhood, this one with roots in Tijuana. Its co-owners, husband and wife Anthony La Via and Marisol Gonzalez, and brothers Oso and Pablo Campos (all four of whom own two other Tijuana-based popular bar/restaurants), opened Lupulandia to bring some Nuevo Mexican/American fusion cuisine to the states.

The food is contemporary and playful, and not what you’d expect from your standard taqueria — or from a brewpub, for that matter. Chef Oso takes inspiration from both sides of the border, as is typical with food you’d find in Tijuana. To wit: a sourdough bread bowl of tuna chowder, for instance. I’m not sure I’m ready to try that one, but there’s plenty more where that came from.  The fried chicken and churros, a South of the Border play on chicken and waffles, did intrigue, and we saved that for our second visit.

The Lupulandia space, formerly home of one of those ubiquitous Mission furniture stores, is cavernous. The focal points are a larger-than-life Xoloitzcuintle (a hairless Mexican chihuahua-like dog) looming over one of the bars on a slab of concrete wall, and the giant words “MEXICAN-AMERICAN” emblazoned over the main bar. There’s an outdoor patio for when our weather gets nice again, and even a kiddie area, so parents can booze it up without having to spring for a babysitter.

I started out with tacos – but not your everyday tacos: 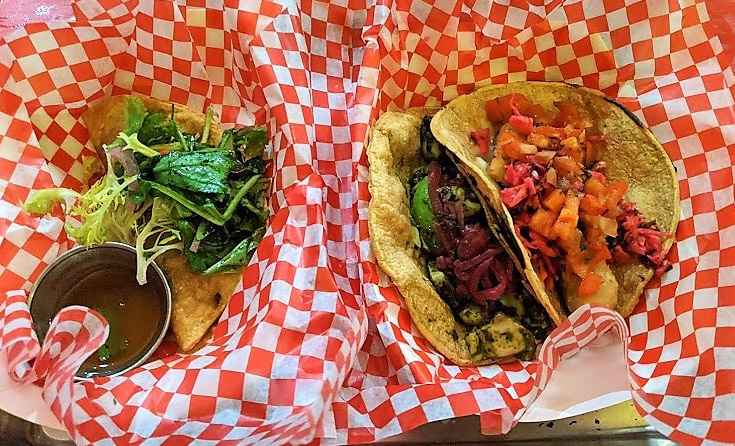 Tripe and potatoes, with a broth for dipping; chicharron de pargo (fried snapper); and the Kraken (a legendary sea monster), which contained braised and grilled octopus with avocado.  The tortillas really shine here; they’re extra corny and reminded me of drifting through El Centro in Mexico City, where the smell of tortillas frying in hot oil perfumes the streets.  All three were tasty; the octopus had a nice chew, and the tripe and potato was homey goodness. There’s a truly incendiary habanero sauce and a smoky chili oil to drizzle over.

BF got the burger (the roja, with chorizo bits), gilded by that viscous chili oil, and shoestring fries. 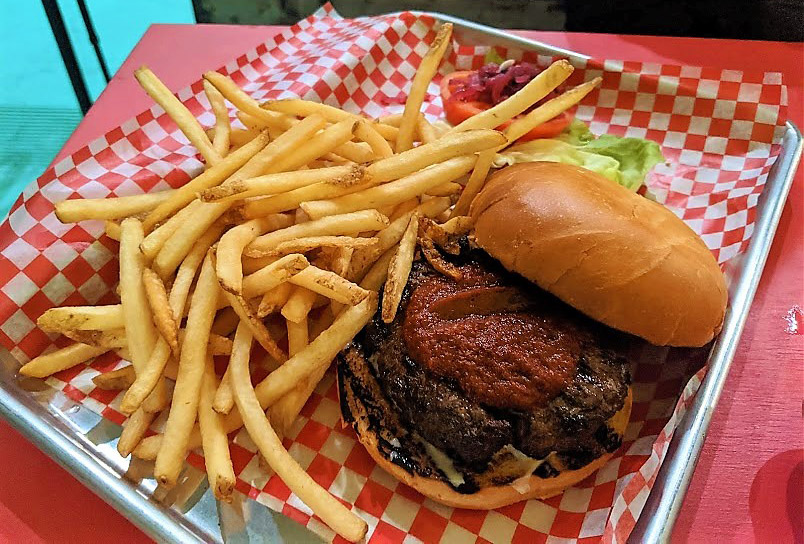 The burger had a great char to it, and the BF loved his fries. However, both our dinners arrived cold, with the exception of my fried fish.  Our order had taken a long time to arrive (order at the counter, table service), so apparently the food sat. I did mention this to the manager who served us (an engaging woman from Barcelona) and she immediately offered to send it back. But we’d already started eating and told her not to worry about it. They’d only been open a few weeks, and had what looked like a large holiday party going on while we were there, so we gave them the benefit of the doubt.

My brewed-in-house (as are all their draft beers) pale ale was floral but not too much so. This is, after all, a brewery – “Lupulandia” loosely translates to “Land of the Hops,” according to the manager, and La Via is co-owner of yet another Mission brewery:  Southern Pacific on Treat. However, the beer here is their own; there’s no crossover with Southern Pacific. I’m eager to try more of their offerings.  There is also an inventive, crafty cocktail list prominently featuring tropical fruit juices and mezcals. Wine is served as well.

On our second visit, we shared the ceviche verde. 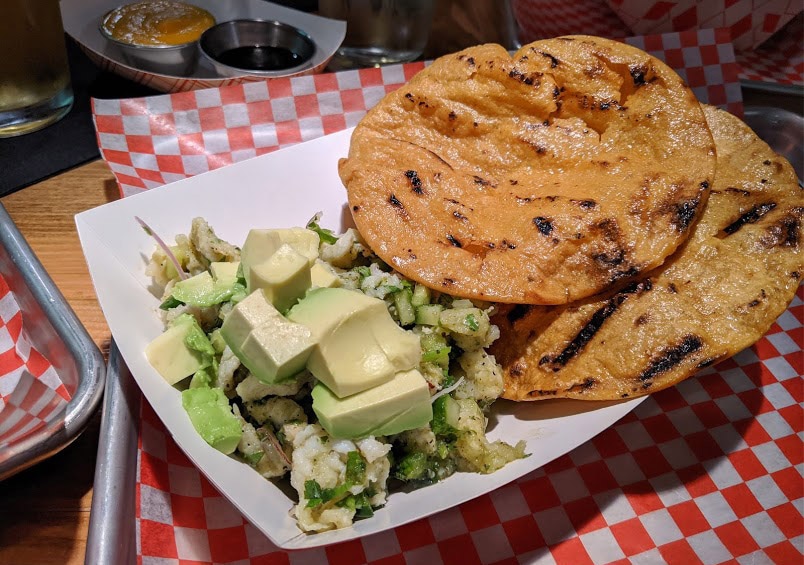 Made with basa, green chiles and cucumbers, the ceviche was accompanied by fried/charred tortillas. Fresh and zingy.

I had the buttermilk smoky fried chicken and churros for my main:. 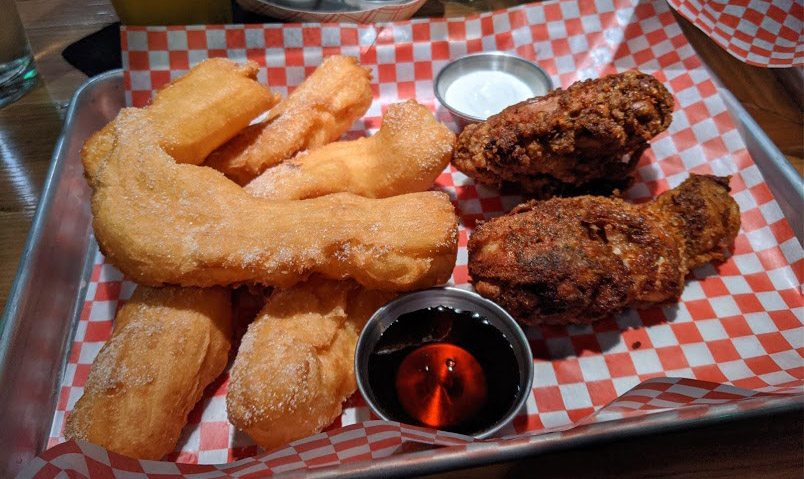 Served with warm maple syrup and a limey “ranch” crema, this was simply excellent. The chicken was uber-crispy, tender and juicy inside. But the standouts were the churros. They were the lightest, fluffiest I’ve ever had, more like ethereal buñuelos.

BF wasn’t as thrilled with his chilaquiles. 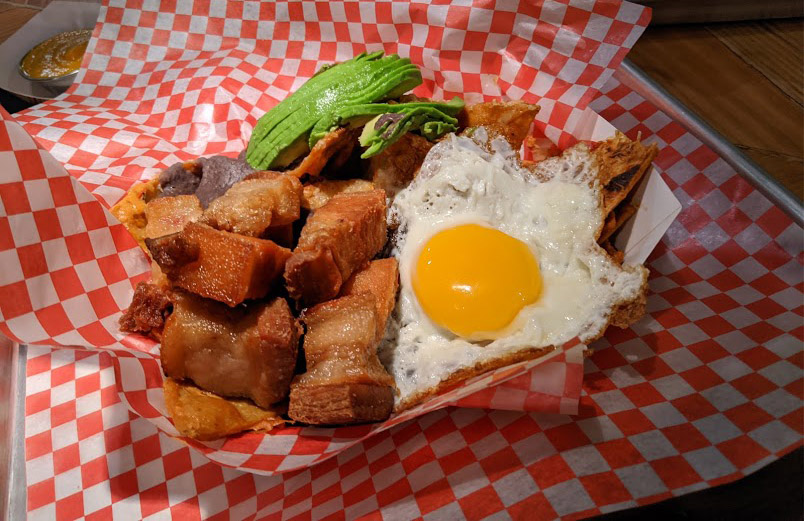 The optional pork belly chunks were plentiful and as porky as you’d want them. And look at that egg!  He felt the chips were overly soggy in their chipotle sauce, but that’s kind of the point of the dish, innit?

I tried a draft sour blonde ale, refreshing and tart, and the BF had a grapefruit lager, which I found very hoppy and quite bitter (two of my favorite things in a beer.)

There’s more to explore on this menu:  the milanesa BLT is calling to me, for one, as well as the enchilada-style shrimp and grits.  Lupulandia has recently introduced its own quesabirria – that lovely, cheesy, sopping taco, also brought to us via Tijuana, that is taking California by storm.  While some of the food borders on being a bit sloppy in execution, dishes like the chicken and churros show you exactly what the owners have in mind. The melding of the two culinary cultures is strong here, and seems rife with possibilities.