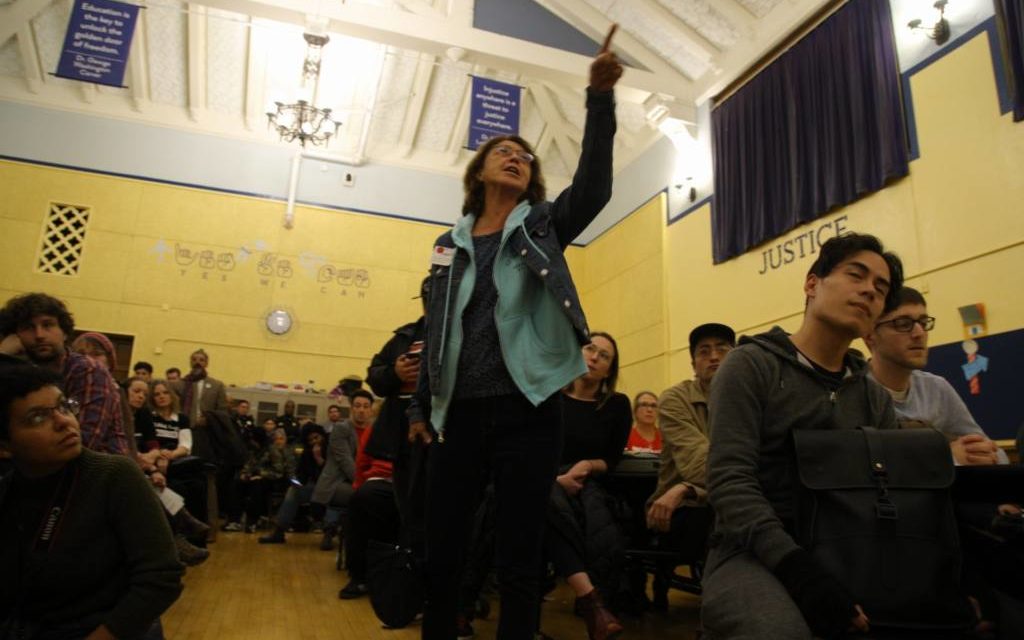 Gloria LaRiva lays into the SFPD at the Dec. 17 town hall meeting regarding the shooting of Jamaica Hampton. Photo by Abraham Rodriguez

In a taut and crowded “town hall” meeting Tuesday night at the packed gym of Cesar Chavez Elementary School, the San Francisco Police Department released video evidence and addressed the public regarding the Dec. 7 shooting of 24-year-old Jamaica Hampton.

Police flagged down the recently homeless man at 8:34 a.m. on a Saturday morning in the vicinity of 23rd and Capp after a call was made following a break-in at a nearby Capp Street apartment. The SFPD narrative given to the public shortly thereafter stated: “When they encountered the suspect, he assaulted an officer with a weapon. An officer-involved-shooting occurred.”

Footage observed by Mission Local last week, however, deviated from this timeline. In it, Hampton led officers on an extended foot chase on 23rd Street following the alleged assault before eluding an officer by sprinting across the street, cutting between two parked cars, and then being shot by a second officer he was running toward. And that’s the footage the crowd viewed tonight.

Beneath the gym walls painted with the words “justice,” “empathy,” “compassion” and “respect,” SFPD Chief Bill Scott opened the meeting by adding one more: “Transparency.”

This would be a transparent process, he assured the several hundred attendees. The evidence — video and otherwise — would be released, he assured, come what may. As would the names of the officers involved in the shooting: Sterling Hayes and Christopher Flores.

Hayes was the field training officer instructing Flores, a rookie. Hayes, incidentally, was involved in a June 2018 incident in which he and his partner were accused of severely beating a bicyclist, and his partner, Michael Marcic, has been accused of lying under oath. 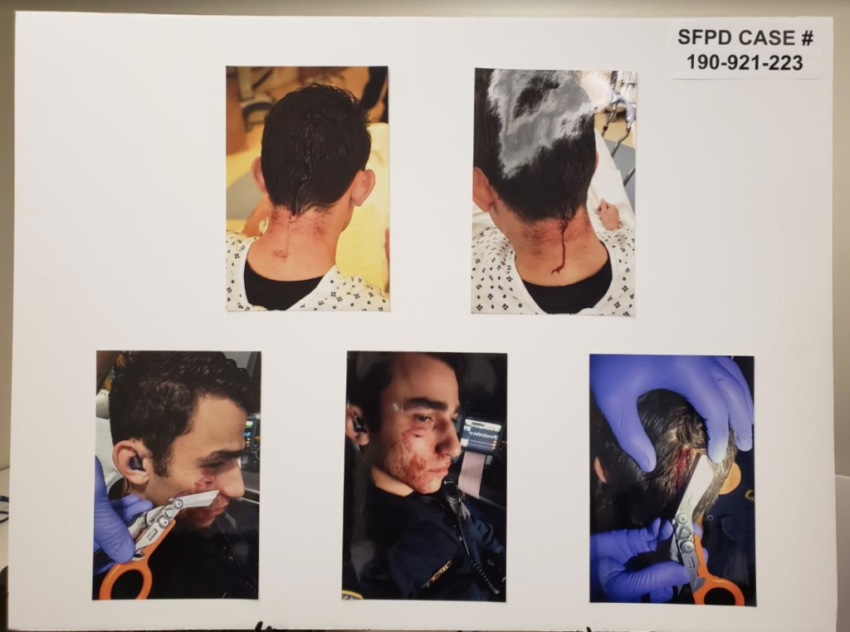 Officer Christopher Flores allegedly sustained these wounds after 24-year-old Jamaica Hampton hit him with a vodka bottle on Dec. 7. Hampton was subsequently shot by police, in the first police shooting of 2019. Photo courtesy SFPD.

As predicted, the audience was shown photos of an officer’s bloodied face, as well as what appeared to be a bottle of Grey Goose vodka — which, allegedly, Hampton used as a weapon.

The night’s audio/video element began with recordings of a 911 call from an apartment dweller on Capp Street reporting a man kicking in her door. This jives with what neighbors, awakened by the crash, told Mission Local last week. The police, we were told, subsequently spent hours combing that apartment for evidence. If there is an evidentiary tie between that man and Hampton, it was not presented tonight.

Audio of a second 911 call, from an unidentified woman, describes a man attempting to break into cars on 25th and Capp. Per the 911 caller, the man attempted to break the windows of multiple cars, even police cars. At one point, he purportedly exclaimed, “where are the cops?”

Body-worn camera footage from Officer Hayes was shown; Officer Flores’ camera was purportedly knocked off during the confrontation with Hampton, during which the officer was severely beaten.

The crowd was not charitably disposed to this footage, nor to footage from surveillance cameras. In it, we see Hampton attempting to elude the SFPD after exchanging blows with an officer. He is trailed by Hayes, and ignores multiple commands to get on the ground. He eludes Hayes, but the officer heads him off and subsequently shoots him when he cuts between two parked cars and runs in Hayes’ direction.

Hayes squeezes off six shots; Flores shoots at Hampton once, while he was on the ground.

“Poorly trained officers! That’s what you got out here,” shouted one audience member. “Back to school!” shouted another. And they were among the polite ones.

A litany of speakers tore into the SFPD brass on scene, with varying degrees of civility. “I do not feel like this could ever be justified,” said Richard Ott, who described himself as Hampton’s younger foster brother. “I’m disgusted.” 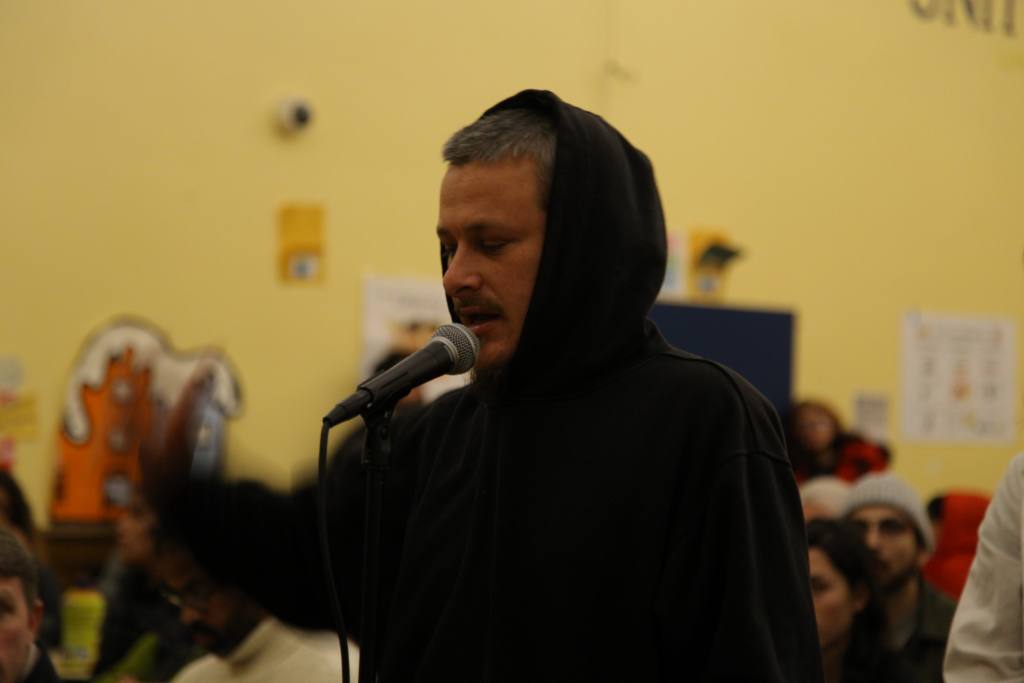 This is par for the course. And, moving forward, the legal response will be as well.

While Gov. Gavin Newsom this year signed AB 392 into law, that legislation doesn’t take effect until Jan. 1. And that date hasn’t happened yet.

That law will change the standards regarding police use of force: While, currently, officers are expected to react with a “reasonable” use of force, come Jan. 1, their use of force will have to be “necessary.”

And that’s a very big distinction. To wit, could it be argued that Hayes’ reaction — chasing down a suspect he witnessed strike his partner repeatedly with a bottle, shouting multiple commands of “get down!” at him, and eventually shooting him when the suspect ran in his direction while still purportedly clutching that bottle — was “reasonable”? Yes, that seems to be a reasonable definition of “reasonable.”

But was it “necessary”? That is not as easy an argument to make. 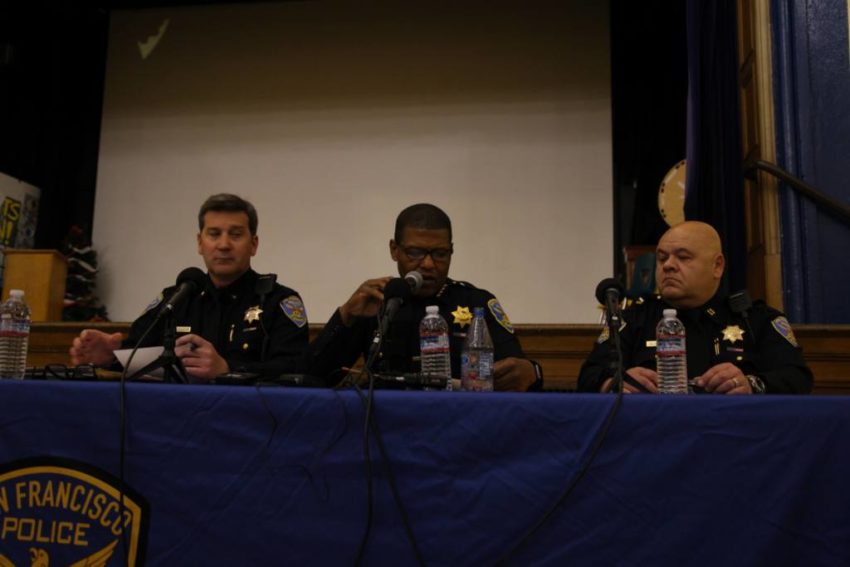 DA-elect Chesa Boudin campaigned in part on holding officers accountable for their actions. While electing Boudin DA was a jolt to the status quo, in this case Boudin will be forced to apply the status quo law.

“I will be fully briefed when I am in office, and I will make the decision on what happens next,” he told Mission Local last week. “My commitment is to release the result of the District Attorney’s office investigation as soon as possible. We want the decision to be transparent and expeditious and in the interest of justice.”

Speaker after speaker described Hampton, who is purportedly still hospitalized and has not been allowed to see his family, as a kind, thoughtful, and intellectual man. A man who overcame many obstacles, including addiction and a turbulent childhood of homelessness.

And that may be, but the footage showed what it showed, and the law is the law. The chants of “jail killer cops” were there tonight. But they were not loud or strong.

“We’ve been through this so many times,” bemoaned Father Richard Smith of St. John the Evangelist Episcopal Church. “We’re retraumatized here.”