The SFPD description of Jamaica Hampton’s shooting is misleading. And this was unwise and unnecessary. 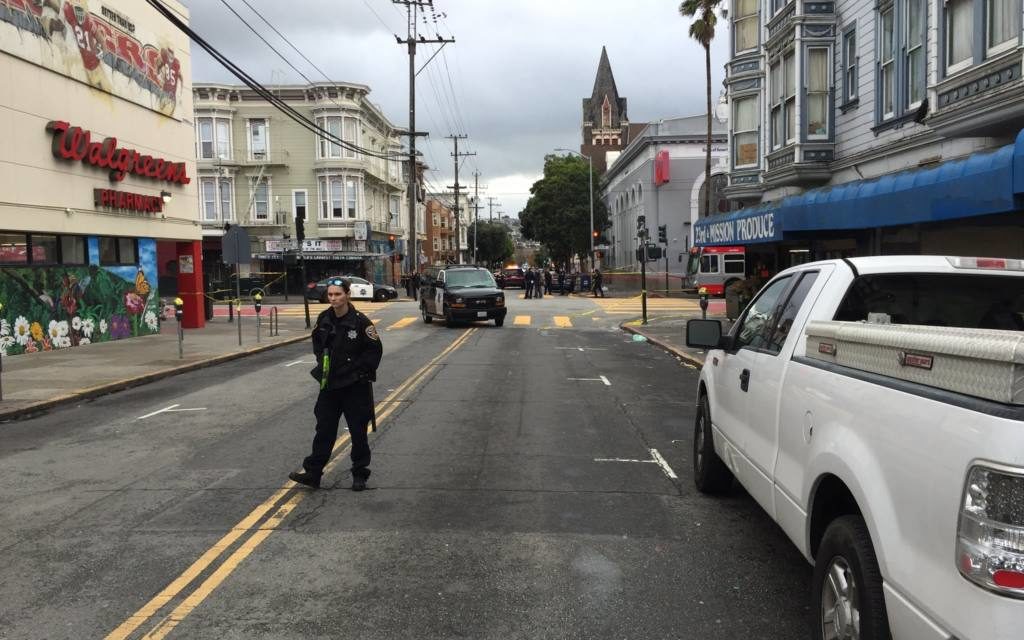 The scene on Dec. 7, shortly after police shot Jamaica Hampton on 23rd Street between Capp and Mission. Photo by Julian Mark

Police narrative of man’s shooting by officers does not match footage viewed by Mission Local — and, come Dec. 17, this footage may be made public

Residents of a large apartment building on Capp between 24th and 25th were awakened on the morning of Dec. 7 by the sound of a door being kicked in.

Then came the screaming.

After breaking in the door, we’re told, a young man confronted a terrified new mother, purportedly demanding to see someone who did not live in the apartment — and, apparently, never has. Following several minutes of insisting that this person lived there, and being rebuked and ordered out by the apartment’s actual resident, the intruder left.

His brazenness left neighbors wondering: Who was this man? A bounty hunter?

Police, a neighbor says, spent hours and hours on Dec. 7 scouring this apartment: “All day long. In and out.” And, as anyone who’s been the victim of a residential break-in can tell you, this is unusual. Cops have no shortage of things to do in this city, and spending large amounts of time gathering evidence — possibly dusting for prints or gathering any DNA samples to be found — is unusual in a situation in which nothing was apparently even stolen.

But this is not a normal situation. On Tuesday, Dec. 17, at 6 p.m., at Cesar Chavez Elementary, at 825 Shotwell St., the SFPD will host its town hall meeting regarding the shooting of 24-year-old Jamaica Hampton. It would seem the SFPD has made every effort to prove that the man who kicked in the door was Hampton — who, barely half an hour later, would be shot multiple times by police responding to the call, following a foot chase coming after he allegedly smashed a bottle into an officer’s face.

The alternative is that police approached the wrong man, a violent encounter ensued, and lethal force was applied.

This is something we may all find out on Tuesday. Along with, basically, just what the hell happened at 8:34 a.m. on Dec. 7, when police crossed paths with Hampton and, not long thereafter, both he and an officer were hospitalized.

And, frankly, the SFPD did itself no favors by describing the circumstances of Hampton’s shooting in a misleading manner.

Mission Local last week was able to track down and observe video of the moment Hampton was shot; attendees at Tuesday’s meeting may see it, too. And even residents willing to give the police the benefit of the doubt in situations like these may feel duped and disappointed because the footage does not match the description offered by police in the wake of the shooting.

To wit, here’s the police account of the shooting:

At 8:34 a.m. officers responded to a call of a hot prowl burglary in the area of 23rd and Capp Streets. They encountered a suspect who matched the description. When they encountered the suspect, he assaulted an officer with a weapon. An officer-involved-shooting occurred. One suspect and one officer were transported to a hospital and are in unknown medical condition.

Along similar lines, we could write: In the beginning God created the heavens and the earth. In 1701 Jethro Tull invented the seed drill.

We’ve left out some pertinent stuff, to put it mildly. So did the SFPD.

Barring unforeseen lunacy, Hampton assaulted that officer, as police claim. We’ll likely see video footage and photos of a bloody face and a bottle at Tuesday’s gathering. Perhaps they’ll even bring the bottle, as the knife brandished by police shooting victim Amilcar Perez-Lopez was subsequently displayed to the media. But while anyone reading the SFPD narrative could well conclude Hampton was shot while assaulting an officer, that’s not what happened.

Rather, in the video observed by Mission Local, he was shot around a minute or so later, following an extended foot chase. He ran all about the sidewalks and blacktop of 23rd Street in a serpentine manner — imagine Steph Curry’s peripatetic, off-the-ball movement — being pursued all the while by a pair of officers with guns drawn.

Hampton — who appeared to have an object, possibly that bottle, in his hand — stopped and started and ducked between parked cars. Finally, with a burst of speed, he runs off the south sidewalk, past a parked SUV and one officer, and onto the north sidewalk. He then runs west on the sidewalk before abruptly careening between two parked cars, into the street, and in the direction of a second officer — though, it appears, not directly at him.

This officer shot Hampton at least once; a gaggle of cops then converged on him and performed resuscitation efforts as he bled onto 23rd Street.

So, that’s not the same thing as the SFPD’s description: When they encountered the suspect, he assaulted an officer with a weapon. An officer-involved-shooting occurred.

That’s not at all the same thing; in a venue which lends itself to histrionics and recriminations, the SFPD has needlessly put itself on the back foot heading into Tuesday’s meeting by behaving in a manner which comes off as untrustworthy. This was both unwise and unnecessary. 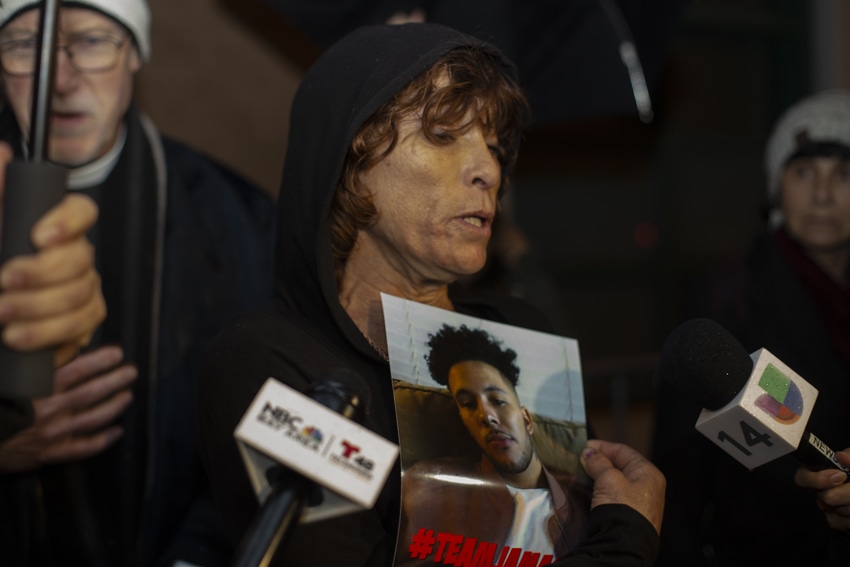 Tana Hampton holds a picture of her son Jamaica, who was shot on Dec. 7 near 23rd and Mission Streets. Photo by Abraham Rodriguez.

Was it “reasonable” for an officer to shoot a man he allegedly witnessed viciously attack a fellow cop moments before, and who is now running in his direction with what appears to be a bottle in his hand? An argument could be made that it was.

But was it “necessary?” That’s a harder argument.

And that gets to the crux of how the law has changed in California. AB 392, which was recently signed by Gov. Gavin Newsom, altered this standard. It is, per former District Attorney candidate Leif Dautch, “a critical change.”

And yet those most inclined to howl at the footage they’ll see on Tuesday will continue to howl thereafter — and, perhaps, at DA-elect Chesa Boudin. Or, more fairly, at the calendar. AB 392 does not take effect until Jan. 1, 2020, and this shooting, of course, occurred on Dec. 7, 2019. “It’s important to temper expectations with Mr. Boudin taking over,” Dautch says. “He’ll bring a different approach, but with respect to this, he’ll be applying the same law.”

Boudin won’t even be sworn in until Jan. 8, a week after AB 392 takes effect.

“I will be fully briefed when I am in office, and I will make the decision on what happens next,” he tells me. “My commitment is to release the result of the District Attorney’s office investigation as soon as possible. We want the decision to be transparent and expeditious and in the interest of justice.”

And then we’ll do this all again.