Do displaced tenants from deadly 22nd and Mission fire have a right to return? Firefighters douse the midnight fire at Mission and 22nd in this Jan. 2015 photo. Photo by Joe Rivano Barros.

More than three years after a lethal fire ripped through 2588 Mission Street, killing a man and displacing more than 50 tenants, no city department can definitively answer whether residents will ever be allowed back in their homes.

The blaze engulfed the building at the corner of 22nd and Mission in January 2015, killing 38-year-old Mauricio Orellana and burning out scores of residents and commercial tenants. For months the building sat and decayed, until it was razed in 2016.

Now, the property owner, Hawk Lou, is proposing a nine-story building with 127 rental apartments for the site. Whether some of the tenants of the former structure are entitled to reside in any new development there has been a lingering question since they were displaced from their homes. Seeing at least some of those tenants return is also a matter of principle for community advocates.

Some tenants signed away their so-called legal “right to return” through lawsuit settlements while others opted to wait and see whether they could return, according to a former tenant involved in legal proceedings against Lou. So it’s unclear just how many people would be eligible for spots in Lou’s new building if a determination is made in the displaced tenants’ favor.

Over the last three years, some have resided in temporary apartments on Treasure Island and Parkmerced. According to Amy Beinart, an aide to Supervisor Hillary Ronen, only one household is currently benefiting from subsidies secured by Ronen in 2017. Most, Beinart continued, have transitioned to permanent living situations. Yet she stressed: “That doesn’t eliminate their right to return.”

“Our position would be that anybody that qualifies, and wants to, has a right to return,” she added. “We would support them fighting to qualify.”

At present, the city agencies involved in making the decision — mainly the Planning Department, the Department of Building Inspection, and the San Francisco Rent Board — are playing hot potato with a determination.

San Francisco’s law governing rentals, section 12.19 of the Rules and Regulations, is very clear about what happens to tenants displaced by disaster: When a building is repaired after a fire, tenants have the right to return to their same unit at the same rent.

But things get fuzzier when a building is completely demolished and there’s nothing left to “repair.” In other words, some vestige of the building must remain for the tenants to exercise their right to return.

Lily Madjus Wu, a Department of Building Inspection spokeswoman, stated in October that a portion of the original structure exists.

“I’ve confirmed that per a site visit made by a Senior Building Inspector about a month ago the permit details are in line with the site condition,” Wu wrote in October. 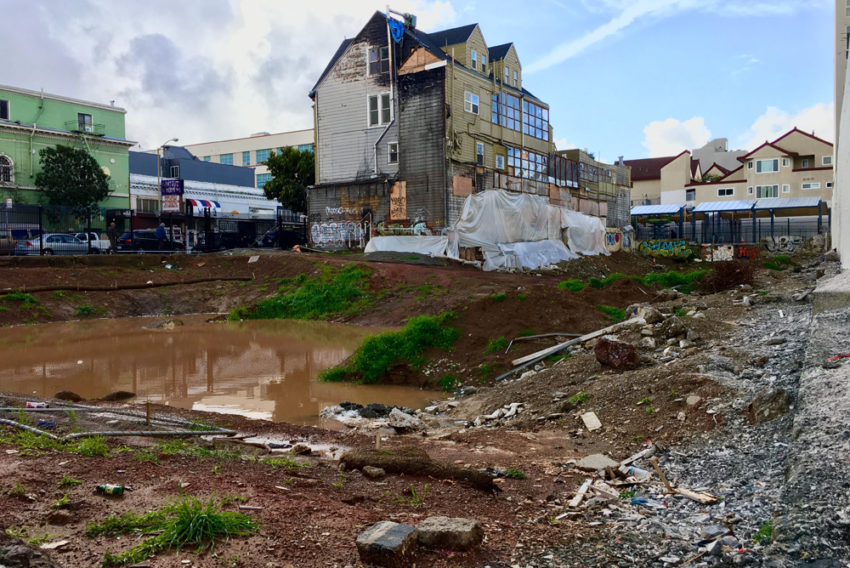 Mission and 22nd streets in January 2017. Photo by Daniel Mondragón

The “permit details” refer to a 2016 order that the building be torn down — but only to street level: The foundation and the basement were ordered to be left intact. A vestige of the old building, in other words, remains — even if not visible to the untrained eye.

But it’s never that simple.

The Planning Department, reviewing a preliminary proposal for the site, seems to be taking a hands-off approach. In its mid-December assessment letter, Planning wrote that the site is a “vacant” lot, but that the Department of Building Inspection (DBI) will decide if the proposal should get a permit for alteration — meaning a vestige of the building remains so eligible tenants can come back — or new construction, meaning no vestige remains and the tenants don’t have a right to return.

It is, the Planning Department letter stated, the Rent Board that will decide which, if any, parts of the rent ordinance apply.

Since that letter was written, however, the DBI has been silent. Multiple department spokespeople did not respond to our inquiries about whether a permit has been issued and when that permit might be issued — and, in short, whether tenants can claim their right to return or cannot.

And this is a determination nobody seems eager to make.

Rent Board Executive Director Robert Collins said, essentially, it’s up to DBI. And that determination, he said, would give eligible tenants potential legal ammunition to file suit for a unit in the building.

“This is a really messy case,” he said. “Most likely this will be determined in Superior Court’s jurisdiction.”

Ronen, meanwhile, is determined to stick up for the displaced tenants. In a statement, she said she’s asked Lou to sell the building to the city for affordable housing, “but he just won’t budge.”

Furthermore, she said: “If he does plan to go ahead with his own [project], he — or any future developer — needs to know that I expect them to play by the rules and honor the right of every former tenant who wants to return.”