In a span of 75 feet, you can find not one, not two, but three hair salons on 21st Street in the Mission District, each with a distinct customer base. That distinction was clear on a recent Saturday.

Chica Sexy at 3180 21st St. was by far the most packed. The lights were dimmed and hip hop blasted. Nine young men on their smartphones waited for one of the four styling chairs to free up. Two doors down at 3188 21st St., Fernanda’s is filled with soft Ranchera melodies. Three booths were empty and the only working clinician was hunched over a client counting down the seconds. “Three-two-Ayyyy!” she shouted as she pulled the wax strip from her customer’s left brow. Omar Aragon, a co-owner of Omar and Christian’s, can watch his competitors from across the street. Sitting in one of his booths is a woman who came in with curly hair but will be leaving with the blow dry look you see on the cover of magazines. Another customer is letting down her hair and explaining to her stylist in Spanglish, with a slight Argentinian accent, what look she’s going for. “We have our clients and they have theirs,” Aragon says. He’s right. The customers you see in one, you are unlikely to see at the other. No matter. For the past nine years, all three have survived by catering to a specific age, gender, and socioeconomic status. This is the way it’s been on the block for many years and it’s the way it’s going to stay, unless rent prices push them out.

Aragon is currently in the middle of renewing a four-year contract with his landlord of nine years. He did not feel comfortable discussing the dollar amount of his previous rent increase but he shared that prices for services will have to increase accordingly.

De Leon Rivas has already signed her yearly lease. For the past couple of years, her rent has increased by $100 at a time, a sum she considers manageable. Prices at her salon have only gone up once from $10 for a haircut to $15, which is good news for her young customers.

The club-like environment at Chica Sexy is a perfect match for Milagro de Leon Rivas’ clients. Contrary to what the name might suggest, there’s only teenage boys and 20-something men here. This isn’t how it was when she first opened the place. “When I opened the salon 15 years ago, I named it Chica Sexy because I wanted men to come in here to see the women working here,” de Leon Rivas said. “I added the barber shop signage a couple of years ago because I loooove working with barones,” using a word describing men in Central America.

Her clients love the music and so does she. Asked whether the volume is too high, de Leon Riva said that’s the way her clients like it. Mario Ruiz, 21, doesn’t have to shout a single word when he walks in every other week for his haircut. He’s been coming to Chica Sexy for five years.

“She knows what I want. I don’t have to repeat myself every time.” Ruiz said. “At other places I might feel a little shy [talking] about what I want. That’s how I got a really bad haircut one time.” The conversations that take place across the street at Aragon’s salon could never happen at Chica Sexy. His clients are mostly women. While a cut is fairly fast at Chica Sexy, Aragon’s clients can spend three hours getting a color job. It’s time that allows for a relationship.

“For my clients, I am their therapists, friend, and confidante,” Aragon said. “When they come in for a complete makeover, I know one of two things happened. Either they got in a fight with their boyfriend, or they started dating someone new. By the end, I know.”

His salon is the youngest of the three, it opened in 2007, right in the middle of the recession, but that did not affect business on the block or, as it turns out, in the country. According to the Professional Beauty Association, between the fourth quarters of 2008-2009, the national economy experienced a net decline of only 130 beauty and hair establishments, in other words, just 0.1 percent. Even in a recession, people still wanted to look good.

At Omar and Christian’s salon that often means getting their specialty — cut and color. The price for a cut ranges from $17 for men and $25 for women, the block’s average. But it’s when color is involved that the prices differ drastically from Fernanda’s. Depending on length, a customer can pay anywhere between $95 to $160.

At Fernanda’s, their most expensive color job costs $80. Vanessa Amaro, a stylist, calls this “the affordable range.” She says they get a good mix of ages but for the most part, she says affectionately, their clients are cadaveres — yes, so old they could be dead.

“At the end of the day, it’s the same job we all do,” Amaro said. “Sometimes,” she stops and looks in the direction of Chica Sexy, “it’s more a show than a job.”

While all three salons have remained put, the owners have seen their fair share of fellow Latino neighbors pack up and leave the area.

Aragon blames this on deportations and rent increases. “All the Mission District started to change,” he said. “It started becoming more American. And prices increased by a lot.” But his customers, much like de Leon Rivas’ and Amaros, return to get their hair done.

“I’m that kinda person that is loyal,” Juan Polanco said.

He jumps on his scooter for the 25 minute ride from the Marina every other week to get to Chica Sexy. 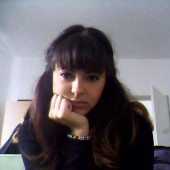