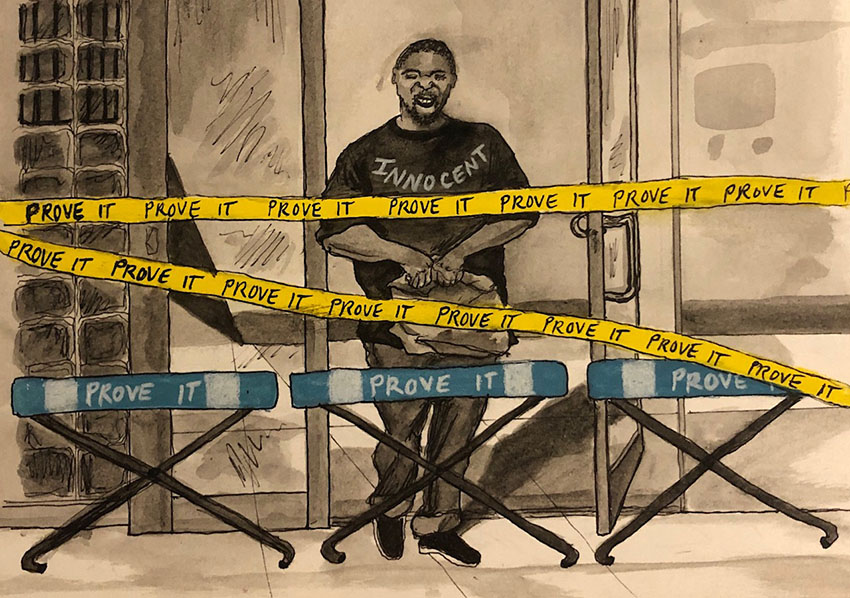 Maurice Caldwell, a man who was wrongfully convicted of murder and is suing a retired San Francisco Police Department commander for his alleged role in putting Caldwell behind bars for two decades, will be allowed to see his day in court.

On Thursday, U.S. Magistrate Judge Donna M. Ryu made it absolutely clear that Caldwell’s case against retired Commander Kitt Crenshaw for allegedly fabricating evidence will go to trial on March 15, 2021. That date can only be changed for pandemic concerns or if the case settles.

“The case is going forward,” Ryu said, denying the City Attorney’s June motion to dismiss it.

The big issue that may or may not be addressed during a potential trial is whether policies and practices by the SFPD, its leadership, and the Office of Citizen Complaints contributed to Crenshaw’s alleged fabrication of evidence against Caldwell.

Caldwell’s lawyers argue that a jury should decide that question, and the city says he does not have enough evidence to argue the claim in front of a jury. The parties will reconvene Nov. 18 to make further arguments on this portion of the case.

Caldwell’s road to freedom and his quest for compensation from the City of San Francisco has been long and bumpy.

In 1991, Caldwell was convicted of killing a man named Judy Acosta and wounding Acosta’s friend, Domingo Bobila, during a botched drug buy in the Alemany Projects.

Read: Maurice Caldwell had his conviction overturned a decade ago. The City Attorney says he’s still a killer.

A decade later, however, lawyers with the Northern California Innocence Project successfully helped Caldwell overturn that conviction, bringing forward a cavalcade of witnesses that supported Caldwell’s innocence — and successfully proving that Caldwell’s defense was ineffective during his 1991 murder trial. Lacking the proper evidence to recharge Caldwell, the District Attorney was unable to re-prosecute him, and he walked free in 2011.

Caldwell subsequently sued the San Francisco Police Department, the lead detectives who investigated him, and Crenshaw. Since then, the case has been active and playing out for the better part of a decade.

Although a federal judge, in March, 2016, granted the city’s request that the case not proceed to trial, in May, 2018, the Ninth Circuit Court of Appeals remanded the case back to the lower court to address only Crenshaw’s alleged actions and, potentially, the city’s role in allowing them to happen.

In arguing the latter point, Caldwell’s lawyers allege that the police chief at the time, Willis Casey, did not care that Crenshaw improperly “injected” himself into the murder investigation against Caldwell and also failed to discipline Crenshaw despite his threats to “kill” Caldwell.

Caldwell’s lawyers also argue that the Office of Citizen Complaints, a body that investigated complaints against police officers and has since become the Department of Police Accountability, failed to properly investigate more than 60 complaints that Crenshaw had accrued before the alleged doctoring of evidence. That failure, they said, allowed Crenshaw’s alleged bad behavior to continue and eventually taint the Caldwell investigation.

The City Attorney, in turn, argued on Thursday that Caldwell does not have sufficient evidence to support any of these allegations in front of a jury and thus it should not be argued at trial.

But the case against Crenshaw as a sole actor is unequivocally moving forward.

It will focus on several instances in which Crenshaw allegedly falsified evidence. In the weeks following Acosta’s murder, Crenshaw, who was then a sergeant, allegedly took Caldwell into custody and showed up at the door of Mary Cobbs, who became one of the prosecution’s main witnesses, as another inspector was interviewing her.

“This is Maurice Caldwell … the guy I’ve been telling you about,” Crenshaw allegedly said to another inspector as he interviewed Cobbs. “I need the keys to put him in the patrol car.”

Although Cobbs did not identify Caldwell that day — she said she did not know who the shooters were — Cobbs ended up selecting Caldwell out of a photo lineup two weeks later during an interview with the detectives.

Caldwell’s lawyers argue that Crenshaw’s showing up with Caldwell during the initial interview was suggestive and influenced Cobbs into identifying Caldwell as one of the shooters.

Moreover, Caldwell’s suit alleges that Crenshaw falsified a report that said Caldwell admitted to being with the actual killers before the shooting, selling drugs, and that he rejoined them afterward. By contrast, Caldwell said he told Crenshaw he knew nothing about the Acosta murder.

Underpinning Crenshaw’s alleged fabrication of evidence is the allegation that the police officer was retaliating against Caldwell for filing a complaint against him only months before the shooting took place. Caldwell alleged in his complaint that Crenshaw choked him and later threatened to kill him and “get the drop” on him.

The City Attorney’s office has previously said that all of Caldwell’s claims have no merit.

But Terry Gross, Caldwell’s lawyer, is confident. “The city should be worried,” he said. As Ryu said, “the case is going forward.”