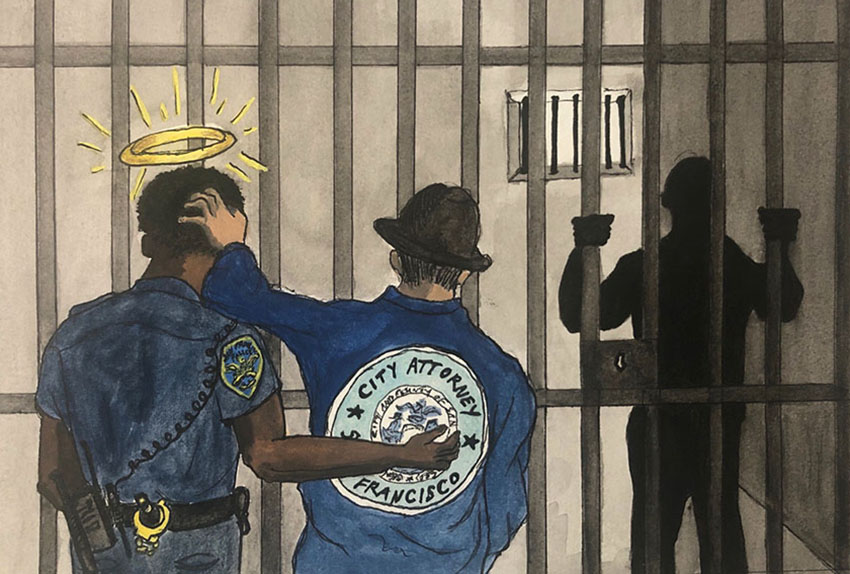 If Maurice Caldwell’s eight-year-old lawsuit ever goes to trial, his lawyers argue that the City Attorney’s ongoing contention — that the exoneree is guilty of murder — will improperly divert the case into a “mini-trial” on whether Caldwell is guilty or innocent.

The civil lawsuit, they say, should instead focus on how Caldwell allegedly became the SFPD’s primary target, and on whether an SFPD officer fabricated evidence out of malice for Caldwell.

Caldwell was convicted of murder in March, 1991, and incarcerated for more than 20 years. His conviction was overturned in 2010 and he was freed a year later, after the District Attorney dropped the charges against him. He was never re-tried.

A pre-trial hearing in Caldwell’s case against the city is scheduled for Aug. 27; a trial could commence on March 15, 2021.

Alleging that Caldwell is guilty, his lawyers argue, is highly improper because Caldwell is presumed innocent under the law — even in a civil case. In 2017 the U.S. Supreme Court, ruling in Nelson v. Colorado, rejected the argument that the “presumption of innocence applies only at criminal trials.”

Nevertheless, the City Attorney presses on with its charge that Caldwell remains guilty. As noted in yesterday’s story, John Coté, a spokesman, summed up the City Attorney’s belief that “Caldwell was not exonerated.”

Civil rights attorneys say that posture is not surprising.

Rarely, if ever, does a municipality have the “incentive to concede innocence” of an exoneree, said Caitlin Weisberg, a partner at Kaye, McLane, Bednarski & Litt, LLP, a criminal defense and civil rights law firm in Pasadena.

“The best I’ve seen is not pushing too hard on guilt,” Weisberg said, who has litigated multiple wrongful conviction cases.

And she said these attempts to plaster a wrongfully convicted citizen again with a murder charge can be “extremely frustrating for the exoneree,” who has already had “to climb a huge mountain” to get a conviction reversed.

“Then, as soon as you start the civil case, you have this position taken either implicitly or explicitly that you’re guilty” despite the absence of any valid conviction, Weisberg said.

Although never quite as explicitly as in Caldwell’s case, the city has maintained the guilt of other men who were wrongfully convicted of crimes in San Francisco and who sued the city. In doing so, however, the city was never wholly successful: Each of the men won millions of dollars in payouts.

The San Francisco City Attorney pushed on the guilt of Jamal Trulove during his April 2018 civil trial against the SFPD, even though his murder conviction was overturned on appeal and a jury subsequently acquitting Trulove, noted Kate Chatfield, who represented Trulove.

The City Attorney “never looked at this objectively at all,” Chatfield said. “They felt the police could do no wrong and did no wrong.”

“They never conceded [the police] framed an innocent man,” she added. “They never had any sense of gravity and how a jury would assess these facts.”

The City Attorney also maintained the guilt of John Tennison and Antoine Goff, according to their lawyers, Elliot Peters and Randolph Daar.

Tennison and Goff were convicted as teenagers in October 1990 in the killing of Roderick Shannon — implicated by two children with unreliable testimony. In 2003, their murder convictions were both overturned with findings of innocence. They sued the city shortly after their release.

“The City continued to maintain that Tennison and Goff were guilty, notwithstanding that their convictions were overturned and that there was a mountain of evidence, including a long-hidden tape-recorded confession from another person (Lovinsky Ricard), showing that they were innocent,” Peters, a partner at the law firm Keker, Van Nest & Peters, wrote in an email. “It was just a litigation position to defend the case and try to settle it for less, with no regard for the truth.”

Daar agreed that that city maintained the guilt of Tennison and Goff with total “anger and vigor.”

“Litigators litigate. That’s the problem,” he said. “At that level you have a warrior mindset — our job is to win.”

Six months before the 1990 shooting at the Alemany Projects that led to Maurice Caldwell’s 21-year incarceration, Caldwell and then-Sgt. Kitt Crenshaw encountered each other in a well-documented case investigated at the time by the Office of Citizens Complaints.

On January 24, 1990, Caldwell was running from Crenshaw and other officers as they investigated a “shots fired” report in the Alemany Projects. The officers ended up finding no gun on Caldwell.

But Caldwell’s interaction with Crenshaw was so unsettling that, two days after the encounter, he filed his complaint with the review board.

As Crenshaw apprehended him, Caldwell said in his complaint, the officer placed a knee on his neck, repeatedly threw him against a wall and choked him for seven minutes.

Crenshaw then took Caldwell to a police station, according to a subsequent 1991 Office of Citizen Complaints summary of the incident.

“One day I’m going to be sitting up there and you’re going to be blown away,” Crenshaw told Caldwell at the station, statements the sergeant admitted to saying when he was interviewed by the Office of Citizen Complaints, according to its report. “Something’s going to happen to you, because sooner or later I’m going to catch you with a gun and you and I are going to have it out.”

“I’m going to kill you,” Crenshaw continued, according to the report. “Next time we’re going to get the drop on you.”

Six months later, Acosta was shot and killed in the projects.

Initially, Detective Authur Gerrans was on the Acosta case, but two weeks into it, he brought in Crenshaw for assistance. As Gerrans questioned witness Mary Cobbs, Crenshaw allegedly took Caldwell into custody and brought him to Cobbs’ apartment in handcuffs.

Crenshaw introduced Caldwell to Gerrans “as the guy I’ve been telling you about.” He then took Caldwell to a patrol car, where the two of them spoke.

Although Caldwell has insisted from the beginning that he told Crenshaw in the car he had nothing to do with the homicide, Crenshaw nonetheless wrote in a police report that Caldwell said he was present at the shooting and was with the shooters beforehand, dealing drugs.

Meanwhile, Cobbs told Gerrans in her apartment that she did not recognize the shooters.

“Despite the fact that Ms. Cobbs had not identified Mr. Caldwell when a uniformed officer brought him to her front door and instead said the shooters were not from the area and she did not know their names or nicknames, [the detectives] and Crenshaw continued to focus their investigation on Mr. Caldwell,” Caldwell’s lawsuit says.

Crenshaw and Gerrans continued to contact Cobbs. Two weeks later, she participated in a photo line-up, in which she identified Caldwell. And, after the detectives asked a number of leading questions, she implicated Caldwell as the shotgun shooter.

Cobbs changed her story and identified Caldwell, the lawsuit alleges, because the officers offered her a chance to move out of the projects if she could identify a killer.

Cobbs was the only person to identify Caldwell as the shooter during the subsequent trial in which Caldwell was convicted.

“During those 20 long years, Mr. Caldwell suffered the unimaginable horrors of life in maximum-security prisons,” Caldwell lawsuit says. “He was unable to pursue a profession or create a family.”

Crenshaw was eventually promoted all the way to commander before retiring from the San Francisco Police Department in 2011.

Paige Kaneb, the Northern California Innocence Project attorney who helped Caldwell overturn his conviction, said that Crenshaw was not only able to choke and threaten to “kill” Caldwell with impunity, but also allegedly falsified evidence leading to Caldwell losing 20 years of freedom.

And, despite all the evidence that Caldwell did not commit the crime, “the state gets behind it the whole time and continues to stay behind it and then continues publicly to say that Maurice is guilty of this crime,” Kanab said. “It’s the kind of government action that I never wanted to believe would happen here.”

Coté, the City Attorney spokesman, said all Caldwell’s claims in the lawsuit are without merit. “The vast majority of his case has already been thrown out,” he said. “All that remains is a constitutional claim against a single officer, which is also without merit.”

But much has not been thrown out: The 9th Circuit Court of Appeals ruled in May 2018 that the allegations against Crenshaw – the heart of Caldwell’s lawsuit – should be left for a jury to decide. A jury may also decide on whether the SFPD’s alleged culture of aggressive policing and harassment of poor Black men in the 1990s enabled Crenshaw’s alleged actions.

Again, Coté reiterated the point of the City Attorney’s chief trial attorney, Meredith Osborn, that the presumption of innocence does not apply in a civil case. “Caldwell filed the case,” Cote said. “He has the burden of showing that his constitutional rights were violated.”

Terry Gross, Caldwell’s attorney, disagrees. He said that Caldwell is absolutely entitled to his presumption of innocence in his civil case. And Caldwell, he said, “deserves substantial compensation for the injustice the City and the SFPD have provided him, and the City should admit that its prosecution of him was wrongful; or at least the City should clearly recognize that it cannot say that he is guilty, since they can’t prove that beyond a reasonable doubt.”

For his part, Caldwell said he remains consumed by his case — still lacking the proper vindication for an ordeal that has now spanned some three decades. And looking at the state of American law enforcement between the time he first met Crenshaw and now, Caldwell sees not a change, but a mirror image.

Watching television with his 6-year-old son in late May, the video of Minneapolis police officer Derek Chauvin kneeling on the neck of George Floyd popped up on the news. “My son said, ‘daddy look,’” Caldwell recalled.

And as the video drew on, and on, and on — though it pained him — Caldwell continued to tell his son: “That’s nothing new.”