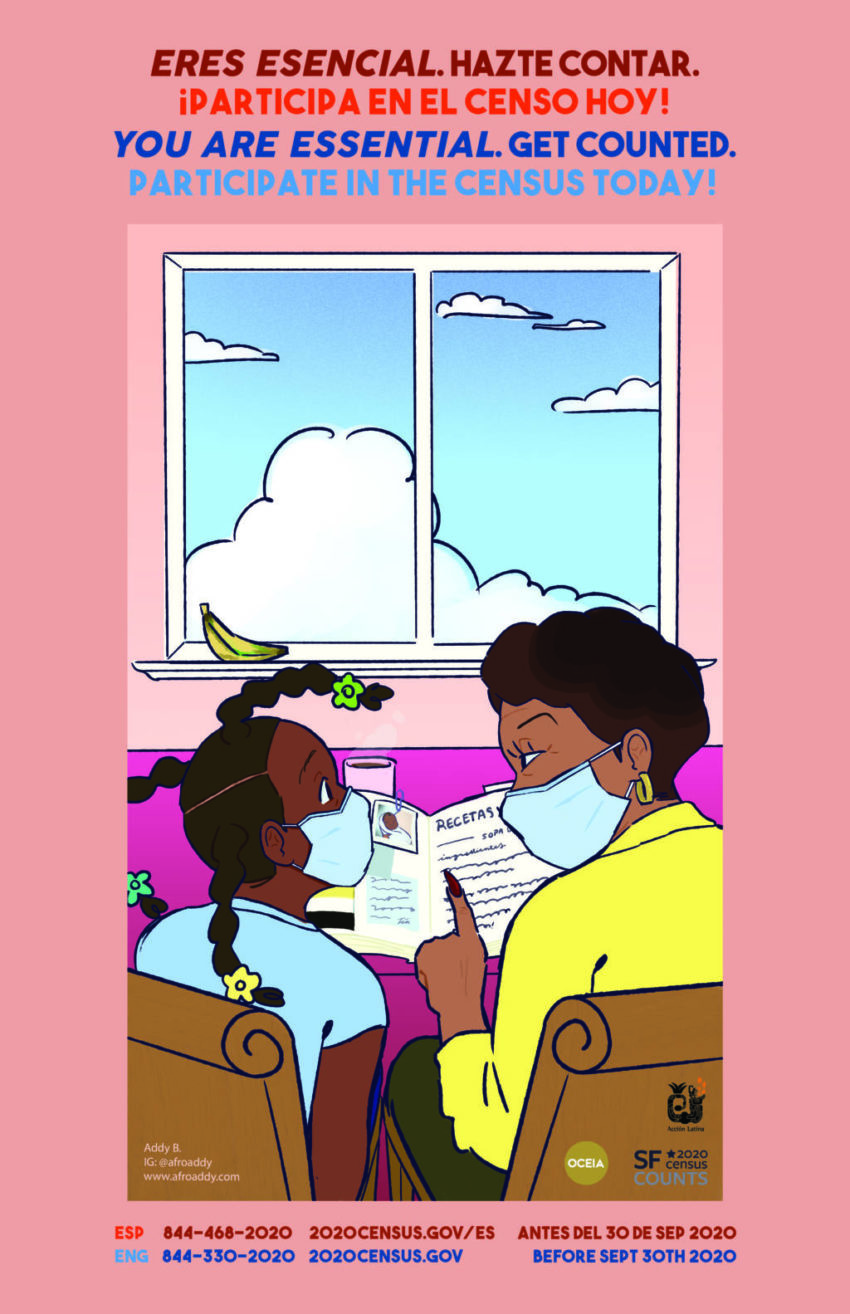 A Census poster created by Addy B., aka @afroaddy on Instagram. Courtesy of Acción Latina, a community organization that was enlisted to help do San Francisco Census outreach.

A pandemic, litigation, fear regarding citizenship questions, and a shortened deadline are just some of the unforeseen challenges besieging the 2020 Census.

The Census is a Constitutionally mandated survey that counts each person in the U.S. every 10 years, and its data affects how much political representation and federal money a Congressional or state legislative district receives. Thus, undercounting could mean a lack of resources and political power.

With the deadline approaching in two weeks on Sept. 30, there’s still work left to do in San Francisco.

Mission Local spoke with Robert Clinton, the 2020 Census Project Manager in San Francisco, who also works for the city’s Office of Civic Engagement and Immigrant Affairs.

1. There are about two weeks left until the Sept. 30 deadline. How many San Franciscans have filled out the Census?

The city’s overall self-response rate is 65 percent. [In 2010, the U.S. had a 74 percent participation rate; San Francisco County had 72 percent.] That doesn’t mean only 65 percent of households are counted; the number of self-response doesn’t reflect the Census Bureau when they go door-to-door [which is still happening]. Our goal is obviously every single household. We’re not sure what we’ll get, we’re going to try our hardest.

2. What’s the self-response rate in the Mission District, then?

The Mission response rate as of one week ago was 62.81 percent of the households, so the Mission is keeping up with the response rate. Some others are lower-responding, like Treasure Island is like 43 percent. They are not the lowest rate.

3. What areas in San Francisco typically tend to be undercounted?

In San Francisco, there are certain areas that are hard to count: the Bayview, Civic Center, Tenderloin, the Excelsior and Visitacion Valley.

When we talk about the difference between housing, some people live in single family homes, and in other areas you have people in apartment buildings and [living with] other people, so they are afraid of listing all the people who live there.

In lower-responding areas, we have people who don’t speak English well. The midst of the pandemic and everything going on, this isn’t high on people’s priority lists, and the Census started right as Covid hit San Francisco. People have other priorities and don’t see it as important.

4. Which demographics tend to be undercounted generally, and why?

Children under the age of 5 are the most undercounted groups, people who don’t speak English well, people with insecure housing. People don’t realize kids count in the household.

5. How do you plan on counting the homeless in San Francisco?

We’re working closely with the Census Bureau and the Department of Homelessness and Supportive Housing. The Census workers have a specific count for people who are homeless that takes place this month, where they go to navigation centers, soup kitchens, tents, RVs, in a specific three-day period. We can increase outreach in public housing as well.

6. For those who haven’t already, why should they fill out the Census?

Let me get on my soap box for a few minutes: So the Census — is really important. It provides money, power and political representation. It not only gives us the number of representatives in the state and House, but it also helps us have representation in the Electoral College. It provides data that is used to do redistricting like the Congressional districts, which are redrawn. The lines are also redrawn in the districts San Francisco, so people have equal representation in City Hall.

7. I heard this repeated figure that approximately $20,000 is brought in per person over the course of 10 years that fills out the Census. Is that true?

I think it’s an oversimplification, but there’s truth to that, for sure. The Census is used in formulas to determine the amount of funding for a specific list of services for state and city: Head Start, Section 8 housing, the National School Lunch Program, Calfresh, and also for larger wrap-around services, Muni funding partially, funding for hospitals and things like that. There’s not a linear one-to-one relationship, but more of an aggregate number.

8. How can Census stragglers fill it out?

You can do it online or by phone primarily. The website is My2020census.gov in 13 different languages, and the phone in [14] languages. [Or, call a city help center here.]

The news you need to know. Support Mission Local.