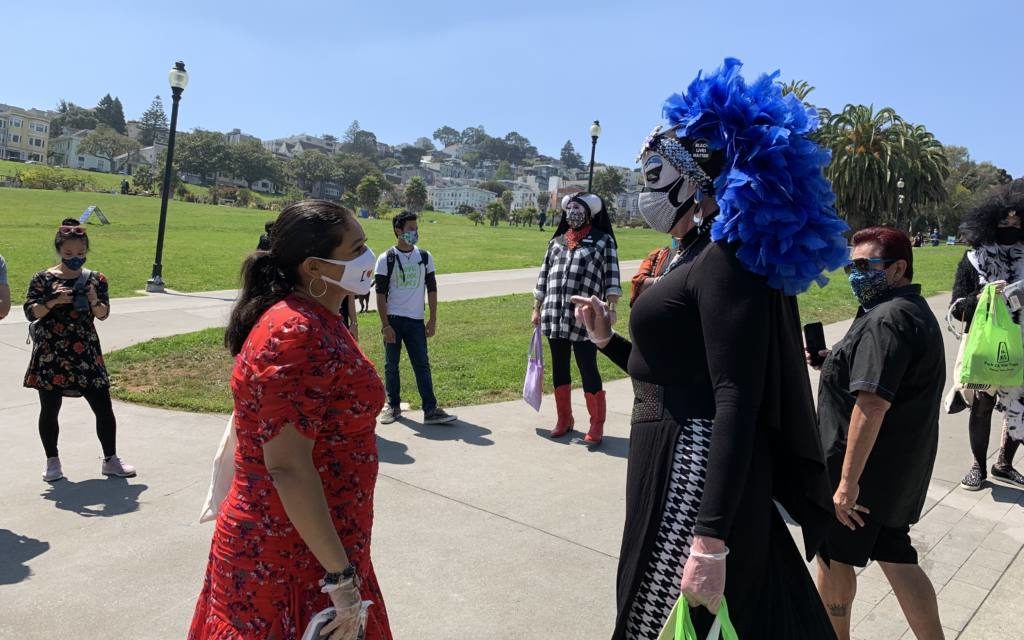 “Let’s be honest. We know most people come here to pick somebody up,” Breed told reporters, who were packed like cattle on the corner of 20th and Church. “We know it’s lonely during covid — we’re trying to find a man or woman or anybody else that’s willin’ to hang out with us in our little circles that we create.”

“This has become that place,” Breed added, referring to the park where only a few denizens had gathered on Friday afternoon, but would be likely to swell by the evening and through the Labor Day weekend and potentially transform into dance parties and dating circles (read: coronavirus breeding grounds — although city officials have yet to officially link any cases to Dolores Park).

As has been her mantra over the last six months, the mayor stressed the notion of “sacrifice,” the importance of mask-wearing and social distancing among park visitors — and all San Franciscans and their guests during a long, sunny weekend — despite the inconvenience. She said that, by hanging out with friends and family outside your household, “you’re part of the problem.”

She warned that spikes in cases have typically occurred following weekends with high turnouts in the city’s parks. At present, San Francisco’s covid-19 reproductive rate hovers around 0.94, which means transmission is not dangerously high — but that could change quickly.

Assisting Breed in her friendly lecture were Supervisor Rafael Mandelman and the Sisters of Perpetual Indulgence. Mandelman said that the Sisters were instrumental in spreading the message about safe sex during San Francisco’s AIDS epidemic in the 1980s, “not in a finger-wagging, shaming kind of way — but in a way that made people understand that we’re all connected, and the decisions that I make impact you.”

“We know that we’ve all been pent up — we want to get out,” said Sister Roma, who wore a bejeweled and sparkling face mask. “We know that we’re going to see people come out.”

“So the Sisters would like to gently remind you that masks are fabulous and we encourage you to protect yourself and others,” Sister Roma said.

After a brief press conference, Sister Roma, Mayor Breed — dressed in a bright red dress and shoes — and Madelman walked through the park to hand out masks and provide photo ops to the scattered groups of denizens at the sparsely populated park.

As Sister Roma put on gloves to pass out masks in the park, she placed a massive blue-gemmed ring over the glove, satisfied she could make both work out. She noted: “Never sacrifice glamour for masks and gloves.”