Health Order anticipated for week of Sept. 14 “to allow for limited indoor use of gyms and fitness centers”

“The same health and safety concerns that have compelled me to temporarily close indoor gyms … apply to the operation of indoor City gyms.”

Aragón cited “recent reports” which “suggest that some City departments continue to allow indoor gyms or fitness centers to operate.”

Mission Local broke this story on Sept. 2 (see below).

Writing on behalf of the San Francisco Independent Fitness Studio Coalition, Dave Karraker stated “This isn’t a win for anyone in San Francisco. The City has demonstrated that indoor fitness is safe based on the data derived from safely running six months of indoor gym operations. Dr. Aragón closing them now further demonstrates the Department of Public Health’s inability to use the data they have on hand, in addition to what they have from the State and CDC, to reopen fitness indoors safely.”

Aragón stated that he anticipated issuing an order in the week of Sept. 14 “to allow for limited indoor use of gyms and fitness centers.”

Gyms serving San Francisco city workers in police stations and other government buildings have remained open throughout the months-long shelter-in-place health order, even while private gyms have been shuttered and their proprietors teeter on the brink of fiscal ruin.

Written records provided to Mission Local by the San Francisco Police Department reveal that the workout facility in the Public Safety building at 1245 Third St. serviced 468 gym-users in the month of May alone (as few as two individuals used the gym on some days, and as many as 29 on others; the tally of 468 all but certainly includes repeat users).

Gyms are also open in the Hall of Justice and Medical Examiner’s office — as well as smaller, more informal gyms or weight rooms at police stations and firehouses throughout the city.

A gym at the Public Works corporation yard was closed — but, Mission Local is told, this was not so much due to COVID-19 concerns as the fact it was repurposed into a storage facility.

Update: Gym in San Francisco’s Hall of Justice is definitely in operation and appears to be open to more than just police working in the building.

Up to *15 people at a time* are permitted to work out here. https://t.co/9o6kvFjegS pic.twitter.com/Rjk5MZEHUr

“Sworn SFPD personnel, as a condition of their employment, are required to maintain their physical fitness. This physical fitness requirement is also a mandate of the State of California for all Peace Officers,” reads a statement from the department.

The names of off-duty workers using the Third Street police gym were redacted from our public records request. It is not yet clear if names belonging to gym-using city employees working for departments other than the SFPD must also be redacted.

“The Department requires sworn members perform and pass a physical fitness exam every six months (twice annually),” continues the SFPD statement. “Because of these requirements and the periodic testing, the SFPD has private gym facilities at all locations throughout the city of San Francisco and they continue to operate in consultation with our Health partners.” 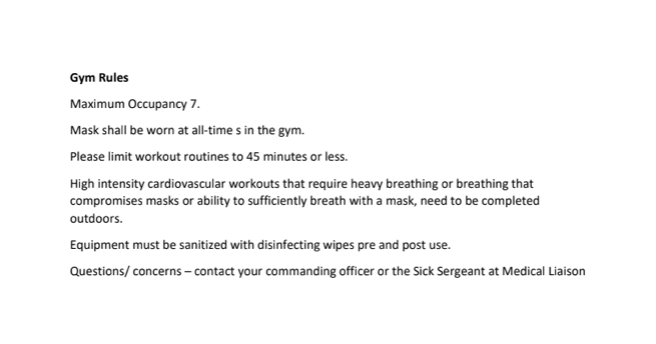 Rules for use of San Francisco Police Department gyms during pandemic times.

At a press conference last Friday, however, Health Department Director Dr. Grant Colfax did not seem aware of city workers’ ongoing gym use.

“There are allowances in the Health Order for government services to deem what is essential, so there is at least a theoretical possibility that gyms could be open,” he said regarding a question about gyms for city workers continuing to operate in city facilities. “Certainly, this goes against public health advice. I certainly wouldn’t recommend people working out inside, at least in close quarters, at this time.”

At the Third Street police gym, no more than seven people are allowed in the room at one time, masks are mandatory at all times, and individuals are required to wipe down the machines both before and after use. Workouts of more than 45 minutes are discouraged, and heavy cardiovascular activity is recommended to be done outdoors.

Dave Karraker is the co-owner of MX3 Fitness in the Castro Neighborhood. He’s also a representative of the nascent San Francisco Independent Fitness Studio Coalition, a consortium of around 70 such studios, representing almost 700 employees.

He did not question the health and cleanliness standards police are using in their gym, but he did question why private gym owners aren’t permitted to do the same. Even when private gyms are, on Sept. 9, tentatively allowed to open out-of-doors, Karraker says they’ll be held to tighter standards than what the police are doing now, indoors.

“If the city has established that there is a way for residents of San Francisco to be able to work out indoors safely, no matter who they are, that standard should be allowed for every person in the city,” Karraker says. “This is just an incredible double-standard.”

Karraker added that the city has not seemed to grasp that gyms are not monolithic, with not all of them being run on the 24-Hour Fitness model. Far from being a vast, unsupervised warehouse where people wander about and touch things at their whim, he says many smaller outfits, such as his own, could make ends meet by seeing one to three clients an hour in a tightly controlled setting.

He did not understand why small, even individually focused gyms remain a restricted business while physical therapists are not. During an Aug. 10 meeting of the city’s Small Business Commission, Dr. Tomás Aragón, the city’s health officer, seemed to agree.

“I am not an expert in all the various ways people run businesses. I just wanna know ventilation, physical distancing, face-masking, the core principles people can apply across businesses,” said Aragón. “I can’t give you a rational reason why a physical therapist can do this and somebody who does personal services who I know can mitigate risk can’t.”

While the concept of “essential businesses” made sense during a total shutdown, Aragón said it led to the city “picking winners and losers” during re-opening. He hoped to move toward assessing “risk, behavior, setting, and activity” rather than “picking one industry over another. It is hard to defend and ended up being harmful.”

Like salon owners, gym owners say that the city’s offer to let them operate out-of-doors — in smoky air and on the cusp of the rainy season — is a hollow gesture. Karraker says the number of city gyms with a sizable parking lot with an established fence that could be converted into an outdoor workout area could be counted on one hand — or even one finger.

As their plight grows more dire, the city’s small-business owners have grown more agitated and resentful regarding restrictions they deem as arbitrary. Notably, footage of Rep. Nancy Pelosi receiving a haircut at a closed San Francisco salon was broadcast far and wide this week, leading to full-throated cries of hypocrisy. The Speaker of the House, for her part, has claimed she was misinformed, and did not know she was violating the city’s health order.

For his part, Karraker says he feels the cops’ ongoing indoor gym usage has, inadvertently, made his case for him.

“If these SFPD fitness centers have been open the entire time, then they are the perfect case studies to prove that indoor fitness is safe,” he says. “If none of them closed because of a covid outbreak, that suggests that other gyms could operate indoors with the exact same protocols and be safe.”