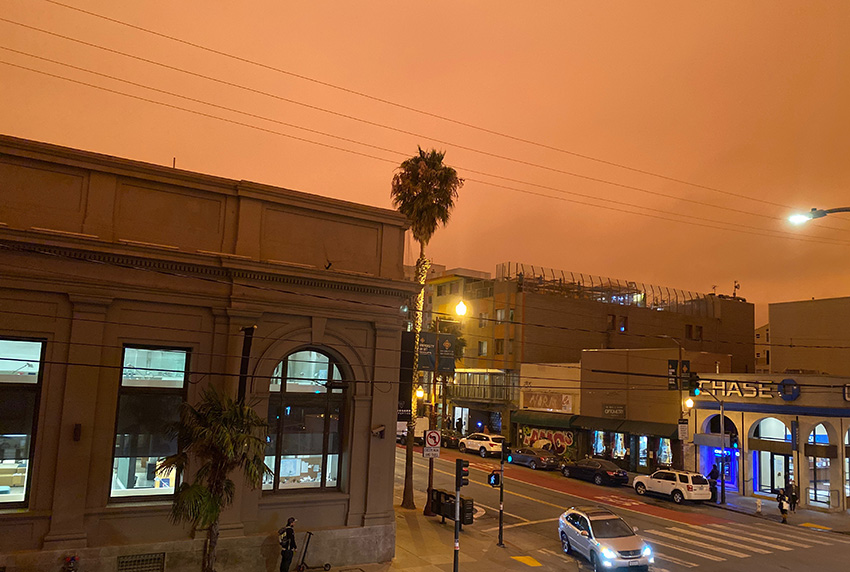 Dystopian enough for you this morning? Maybe you thought “darkness at noon” was a metaphor.

Relax. A good time for some local jazz. And for those of you wondering what ever happened to Amuse Bouche street cart, you’re in luck.

Also good news, DPH is reporting an improvement in contact tracing. OK, the numbers for contacting positive cases and their contacts still hover around 80 percent, generally where they’ve been since DPH began its reports. We still don’t have any idea of how large the tracing team is now, how many attempts were made and the kind of responses, but hey, on a day like this, we’ll take what we can get .

Scroll down for more numbers.

Thirty-six cases were added overnight to the Mission’s total which now stands at 1360. The highest daily number in over a month. Must be those new fast tests we’ve been hearing about. Or clearing up the backlog.

DPH reports the seven-day average number of daily cases for the week ending September 2 is 69. We’ve been between 69 and 75 since August 21.

56 percent of the positive cases are heterosexual. Gay and Lesbian make up 3.7 percent, while Bisexuals just .7 percent. In case you’re wondering about the rest, they are either other, unknown, unsure or declined to state.

It may look grim outside, but an ensemble of R number models agree transmission rates continue their downward trajectory in SF (.91) and California (.87).

The ICU patient count remained flat as of Monday and the the seven-day average of percentage of Acute Care and ICU beds availble remained positive: 30 percent for Acute Care, 36 percent for ICU.

The seven-day rolling average of positive cases for the week ending September 2 was 2.11 percent. Same as yesterday.

Given the new way DPH now reports deaths, it’s hard to know anything about the new death (demographically speaking) or if the death actually occurred. The “more reliable” death numbers go back to September 2, when the total was 86.