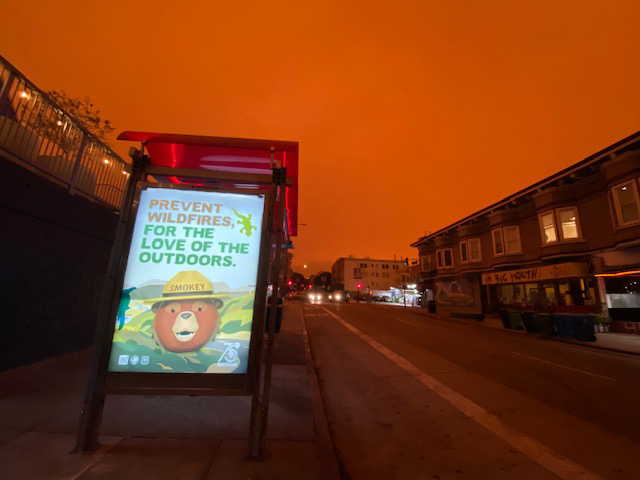 Let’s give some credit where (some) credit is due. Though coronavirus testing in San Francisco has been overstated at times, compared to other cities and regions in the country, it still stands out as a “model” for other cities to emulate. Or so says Atul Gawande in a recent New Yorker piece entitled “We can solve the coronavirus-test mess now — if we want to.”

What sets SF apart from others is a network of free drive-through and walk-in sites, open to anyone who lives or works in the city.

Yes, we may look good when compared with other places, but as we’ve learned, much more targetted testing is sorely needed.

Stuck inside again and bored with burritos? Check out the flame-grilled chicken and meats from recently arrived Il Pollaio.  And they’ve got steak fries!

Scroll down for today’s numbers which don’t smell as bad as the air.

As of September 9, DPH reports a total of 1386 cases in the Mission.

A week ago, when numbers were “more reliable” the seven-day average number of daily cases for the week the average was 69, on the high plateau where it’s been since August 21.

The seven-day rolling average of positive cases also remains low. It was 2.05 percent for the week ending September 5 . In California, the 14 day average is 4.0 percent, a notable improvement from a couple weeks earlier then the positivity rate was above 6 percent.

The number of Covid patients in SF hospitals shows a modest rise. However, the rate of weekly change in Covid positive patients, which had been recently dropping, shot up 9 percent. The DPH goal is to keep the increase below 10 percent. Availability of ICU and Acute Care beds remains sufficient to handle a potential surge.

It has been obvious for a long time that the virus won’t be contained in San Francisco until the City makes a substantial committment and effort to test, trace and quarantine the Latinx population. And pay the volunteers who have spearheaded the effort so far.

Covid deaths continue to rise. Though the Case Fatality Rate remains below 1 percent, deaths have increased over 44 percent over the past two months.