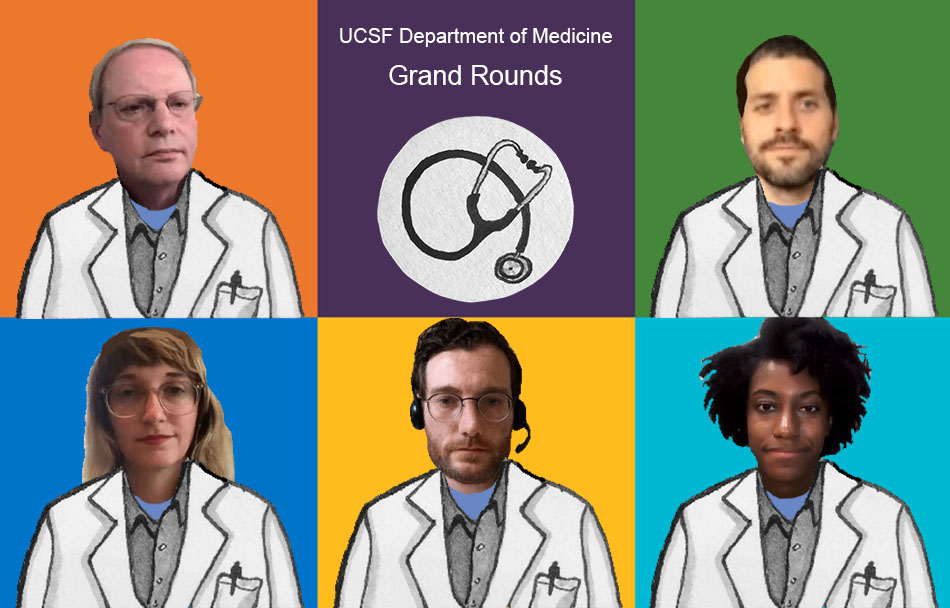 At UCSF Grand Rounds on Thursday, moderator Bob Wachter introduced three topics: rapid testing, herd immunity and the role of narrative in the pandemic. It was time, he said, for “out of the box” thinking.

The “eye-opening and maybe a little controversial” areas demonstrate the importance of attacking the pandemic in creative ways, Wachter said.

Dr. Michael Mina, assistant professor of epidemiology at the Harvard T. H. Chan School of Public Health, began with a debate familiar to Grand Rounds regulars: the importance of sensitive covid-19 tests versus the time it takes to get tested and obtain results.

Much like Dr. Chaz Langelier, who gave an overview of different covid tests on July 30, Mina believes that implementing large-scale rapid testing with lower sensitivity and faster results (10 to 15 minutes) could be critical in stopping transmission.

While sensitivity has been “first and foremost” in a lot of testing discussions, Mina said, cost and result turnaround time are two important factors — the latter of which has been “abysmal” in the United States.

Different tests can detect different levels of the virus, which is constantly replicating itself in the body in early days of infection. A low sensitivity test may not detect a positive result as early as more sensitive tests. However, because the viral load grows so quickly, a lower sensitivity test, given to a covid carrier just a few hours or day later, will show a positive result. Having rapid testing and results would allow more people to be tested, and those who are sick would isolate, thus reducing the spread.

If one’s goal is to reduce transmission, “by far the most important piece of the testing regimen that we need to get right, here, is not the exact metrics on the test,” Mina said, “but it’s the frequency that the test is being used.”

Referring to one modeling study, Mina said that if individuals are tested every day or every three days and results are returned before 48 hours, you could stop all transmission at the population level.

About 800,000 or 900,000 covid tests are administered in the country daily, said Mina, and many more are needed. He advises the United States to prioritize cost and frequency over sensitivity and encourages the development of tests that don’t require laboratories.

Currently, the Food and Drug Administration requires 90 percent sensitivity for tests, a level Mina said is based on prioritizing diagnostic medicine over a public health framework. While he said “we absolutely need the most sensitive, specific test you can get,” when one is seeing a doctor for a suspected covid case, he also envisions Americans testing themselves daily with a saliva or nasal swab test that would cost $1 or less per use.

While this would require $330 million a day, the cost for one year is “just a small fraction of one of the stimulus bills put forth” Mina said – reasonable cost when one considers the outcome. Mina hopes the FDA will authorize this kind of test as a public health tool to control population spread, and use tests such as the PCR test as diagnostic tools.

Dr. Trevor Bedford, affiliate associate professor of epidemiology at the University of Washington posted what Wachter called a “fascinating hypothesis” to his 260,000 Twitter followers about the dynamics of herd immunity.

Herd immunity occurs when a certain percentage of a population becomes immune to a disease, reducing spread among the entire population. Though many believe that herd immunity can be achieved for the coronavirus when 60 percent of the population is immune, Bedford posited that reducing “social connectivity” could drop this number to as low as 20 percent. To measure social connectivity, he considered dining reservations through the app Open Table and data from Google Mobility, such as the number of people looking up directions to go to retail stores and recreation sites.

To demonstrate his point, Bedford discussed changing Rt estimates. That estimate is a “realtime” estimate of the R-naught number, which tells us the number of people a covid-positive person will go on to infect. He looked at numbers for New York, Florida and Arizona. 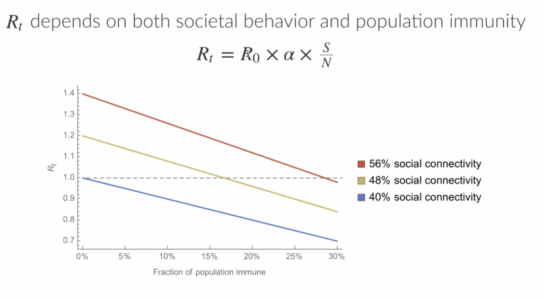 Alpha represents social connectivity and S/N represents the percentage of the population that is immune.

Alpha represents social connectivity and S/N represents the percentage of the population that is immune.

Bedford suggested that 15 to 20 percent of Florida’s population has already been infected, and that the decline in cases in Florida and its lower Rt value can be attributed to that 15 to 20 percent immunity combined with societal measures such limiting capacity in restaurants or encouraging mask use and physical distancing to reduce covid’s spread. So even while Floridians are dining out, these other factors are keeping the spread down. 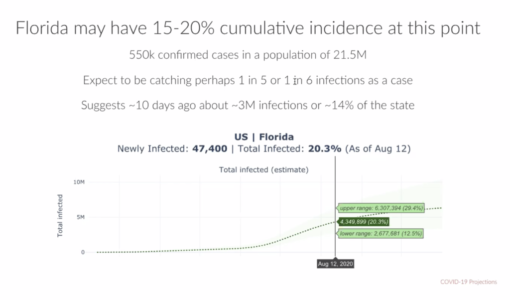 If the country returned to the life we knew back in January, we would need 60 percent of the population to reach herd immunity, Bedford said. But if we reduce social connectivity by staying home and doing other preventative measures, a smaller proportion of the population will need to be immune to control the pandemic.

However, Bedford said he is not advocating for herd immunity as a solution to the pandemic, as covid’s infection fatality rate is close to .5 percent, a “massive health cost,” he said.

“I’m just trying to explain why we’ve seen these epidemics wax and wane,” he said.

He believes it is important to understand and convey what public health experts think is happening as Rt values drop, that it is “not just magic we’ve had epidemics subside in these places.”

Though some fear that promoting this idea will make people take preventative measures less seriously, “being as scientifically open with people is the right way to be behaving” in the midst of a pandemic, Bedford said.

Storytelling in a pandemic

Wachter highlighted the importance of a field in responding to covid that hasn’t received a lot of attention on Grand Rounds: narrative.

“Humanities, and particularly the use of narrative, has a unique role in laying out these issues and helping us contextualize all of the data, which can be dangerously bloodless,” Wachter said. Two UCSF doctors have been working together throughout the pandemic to share stories from healthcare workers.

Though they have hosted live storytelling events in the past, right now the organization is collecting audio diaries from healthcare workers to create podcast episodes that are released every Tuesday.

“Each audio clip itself isn’t necessarily a full story. There are these moments, these slices of life, and when you leave them together into a tapestry, this larger story starts to emerge of ‘what is it to be a health care worker during COVID-19?’” Silverman said.

Discussing the disproportionate impact of covid-19 in U.S. communities of color particularly the African-American community, McMullen said the podcast is about “empathy across differences. And stories are just one avenue to do that.”

These podcasts are “highlighting not just the pains and difficulties that come with being black in our society, but also the joys and the strains and and the triumphs, and also just the complex humanity that really connects us across different zones and specifically as people who work in health care and are working during this unique time,” McMullen said.

The doctors played two clips from different podcasts, complete with authentic, hopeful testimony from two doctors along with the background noise of hospital life. Though the Nocturnists was initially created for healthcare workers, anyone can listen to full episodes or see their other work here.

Grand Rounds will return next week, August 20, with a non-covid episode before going on a break until September 10. Following its return, covid-related topics will only be discussed every other week.