UCSF Grand Rounds: Vaccine and testing and treatments, oh my! 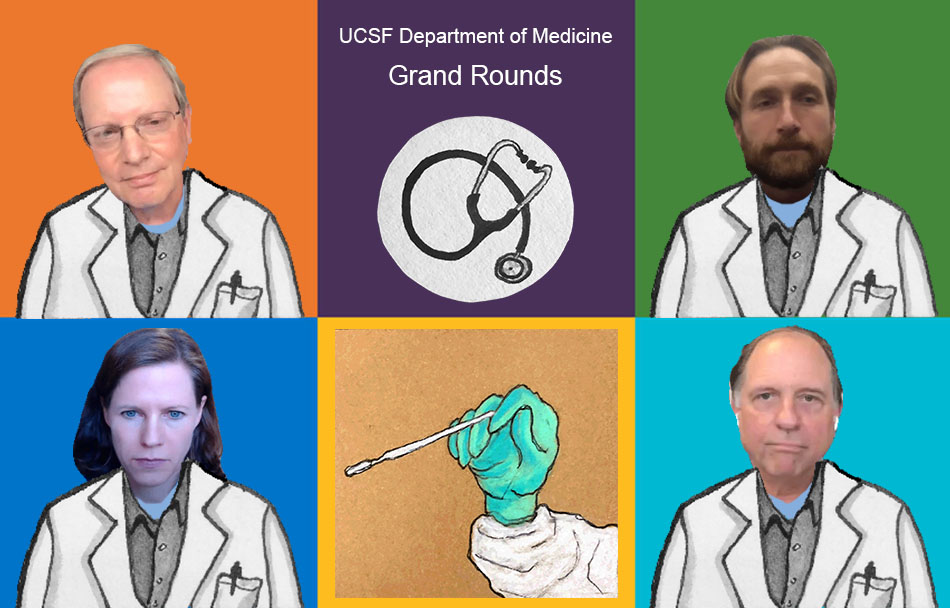 We’re certainly not in Kansas anymore — and if you’re wondering when you can click your heels together three times and return to pre-COVID-19 normalcy, prepare yourself for a year-long stay in Oz. Grand Rounds moderator Dr. Bob Wachter waited until the end of this week’s session to ask the question everyone was waiting for: when will life return to normal, and what will be the mechanism that helps us reach it?

The most optimistic answer? June 2021. There wasn’t consensus as to whether frequent testing, drug treatments or a vaccine would be the fastest solution, but three panelists gave succinct updates on each.

Dr. Chaz Langelier, assistant professor of medicine in UCSF’s Division on Infectious Diseases, started his presentation commending California’s high volume of testing, using a map to show how different states compare in terms of the number of tests administered. It should be noted that the number of tests is different from the testing rate, which may give a more accurate picture of how California measures up against other states as it takes population size into account. 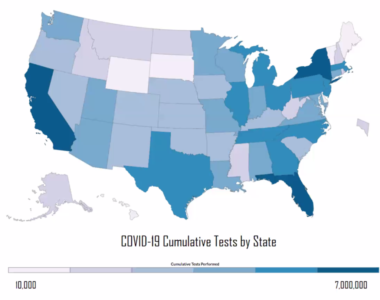 Though he said California was “amongst the highest of tests done,” the New York Times reports that California is currently meeting only 53 percent of its testing target.

Some 193 COVID-19 tests have been approved by the FDA for testing, each with different sensitivity levels and mechanisms to detect the virus. The “gold standard” is – hold onto your hats –  the reverse transcriptase polymerase chain reaction (PCR) test. Although cursed with a complicated name, Langelier said it is the most sensitive, which means it is the most reliable. It takes 45 minutes to three hours to process and return results.

Other types of testing, such as antigen testing and nucleic acid amplification testing, can take as little as 15 minutes to return results, but are less sensitive than PCR testing. These laminar flow tests “are really fast. They can be done anywhere. They don’t require complicated instruments,” Langelier said.

The sensitivity of PCR tests, however, decreases over time as viral load decreases.

Studies suggest two things: a person can be more infectious before exhibiting symptoms and infectiousness drops off.

All of these studies raise the question: do we need a really sensitive test if people with low viral loads aren’t infectious?

“A growing contingency argues we don’t need tests that are that sensitive; what is important is detecting people who are infectious,” Langelier said. “Maybe cheaper, faster tests are needed to control the pandemic.”

A second important factor of testing is the turnaround time for results. Langelier showed a modeling study that looked at the R0 value (R “naught,” the number of people a sick person will infect) compared to sensitivity and time. 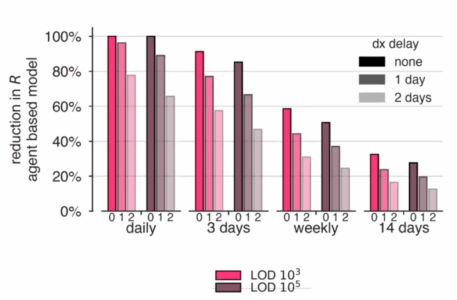 Pink bars represent more sensitive tests, and grey less. The graph indicates that “having to wait for the results of the test provides a significant opportunity to transmit to others,” Langelier concluded. If you returned the results in 15 minutes, you would reduce the ability of infecting others by 32 percent, he said.

Regarding Langelier’s prediction for returning to normalcy, he said “it’s going to require a multifactorial approach, like most things in life. But I think testing really could play a key role in reducing transmission. And, you know, really, it’s going to require a centralized effort from above, instead of piecemeal efforts throughout our country.”

Starting with the first agent approved for COVID treatment, remdesivir, Luetkemeyer said that the drug shortens the course of illness for hospitalized patients. There’s a shortage, so hospitals nationally and in the Bay Area are struggling to decide how to allocate this limited resource.

A New England Journal of Medicine study looking at the effects of remdesivir on recovery in patients for a 29-day period. The study found that those receiving oxygen, but who were not on ventilators or high-flow oxygen, had a statistically significant benefit. However, Luetkemeyer cautioned against taking the results completely at face value, as 29 days may have been too short of a period to assess recovery for those who are critically ill.

Another drug of choice is dexamethasone. A New England Journal of Medicine report found that ICU patients on dexamethasone had a 29 percent death rate, versus “a whopping 41percent mortality, which is really quite something,” Luetkemeyer said.

She finished her presentation talking about “the next frontier” — outpatient treatment. While most studies to date have focused on hospitalized patients, Luetkemeyer sees a need for therapies that can be taken or administered at home. She discussed four “areas of interest:” an inhaled form of remdesivir, and two oral drugs called favipiravir and EIDD 2801. She said a large NIH trial will test several outpatient therapies.

However, when asked about reopening baseball games and movie theaters, Luetkemeyer said, “I don’t think we’re going to treat our way out of this and I don’t think the vaccine timeline is going to get us there in time.” She wants a vaccine but believes lots of testing and masks could “really go in an enormously long way.”

“Annie has given us some therapies that we know work but are not game changers yet,” Wachter said to the final speaker. “So we’re counting on you to tell us that there’s going to be an effective vaccine that will bail us out.”

ZSFG’s chief of the Division of Experimental Medicine, Dr. Joel Ernst, believed that a vaccine would be the key to returning to normalcy by next July.

He discussed six COVID-19 vaccines in varying stages of clinical trials with humans, noting that three of them have published results on Phase I, reporting that measurable amounts of neutralizing antibodies were generated among patients. “Since there’s a reasonably widely held belief that neutralizing antibodies can provide protection, and also some evidence of that, this seems to be good news,” Ernst said. 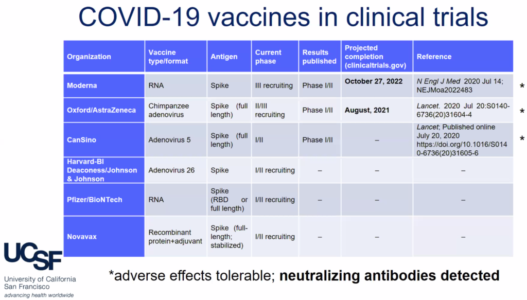 He also addressed concerns brought up by two papers that came out regarding a loss of immunity against the virus after infection. “I absolutely would not use this data as a source of pessimism with respect to the value of vaccines,” Ernst said. He added that it is “absolutely normal” after getting infected for there to be a decrease in one’s antibodies to a disease, explaining that memory B cells (which produce antibodies) can be recalled upon re-exposure, creating an “even more robust” immune response.

Two groups (Moderna and Oxford University) have received $1 billion each for large, randomized trials in vaccine development. Moderna is expecting final results in October 2022, while Oxford will have its results in August 2021. This is why some are considering controlled human infections, Ernst said, where smaller numbers of participants are exposed to the virus to study the efficacy of vaccines. This method is less costly and produces knowledge faster with more predictive determinants of protection, but is risky, as there is no COVID-19 cure.

Another ethical consideration that scientists are running into is: who will get vaccines first? Currently, the Centers for Disease Control and Prevention says that the highest-risk medical, national security and essential workers should be prioritized. Ernst went into greater detail, adding those at disproportionate risk of infection or poor outcomes, communities of color, older adults, hospital cleaning staff, teachers, and others should receive the vaccine earlier than others.

The elephant in the room is the strong anti-vaccine faction. Ernst cited a recent estimate that 50 percent of the public is considering declining a vaccine and that there are some predictions that the earliest vaccines might only be 50 percent effective. This equates to only 25 percent protection. New approaches to public outreach are needed, he said.

Though all three presenters had encouraging news to share, all the solutions will require time. So strap on those glittery red heels, or maybe opt for some comfortable sneakers. We have a long way to go.