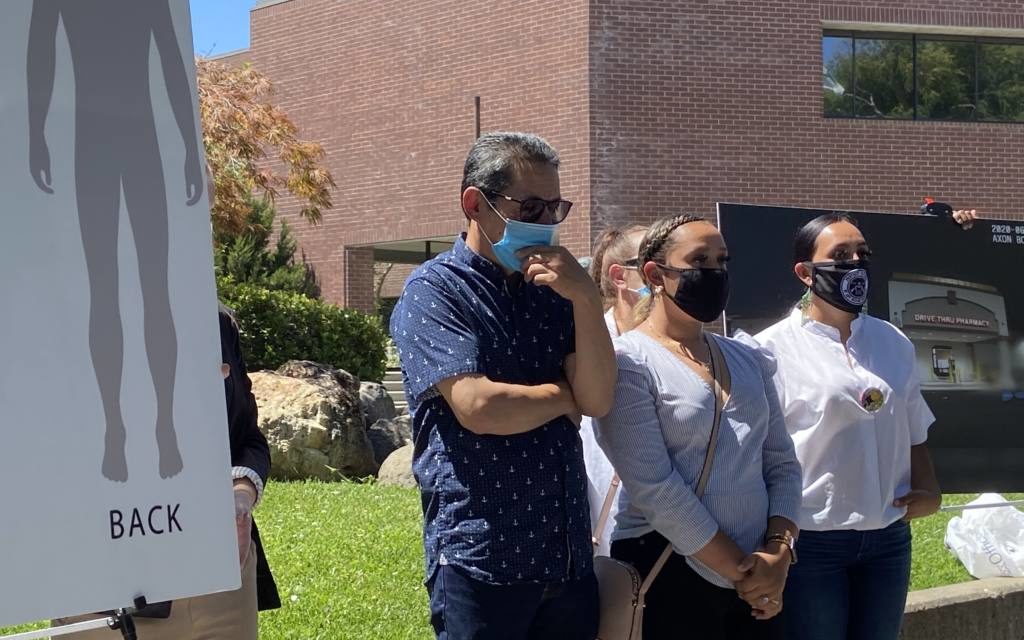 The Monterossa family stands in front of a crowd at Vallejo City Hall to announce a civil lawsuit prompted by the death of their son and brother, Sean. Father Neftali Monterrosa (left), sister Ashley Monterrosa (middle), sister Michelle Monterrosa (right) and mother Nora Monterrosa (back). Photo by Annika Hom.

The family of Sean Monterrosa, the 22-year-old who was fatally shot by Vallejo police on June 2, filed a civil lawsuit today against the City of Vallejo, the Vallejo Police Department, and Vallejo Police Officer Jarrett Tonn, who allegedly shot Monterrosa.

In the lawsuit filed in federal court, the family seeks “damages for violation of civil rights and wrongful death,” as well as a jury trial.

“There is no comfort for Mr. MONTERROSA, for his parents, and for his two sisters,” the lawsuit states. “They have not been through this before and will never be alright again, because Defendant TONN was trigger-happy, could not see accurately through the unmarked police car windshield, and murdered their son and brother, who was only 22 years old.”

Monterrosa’s parents, Neftali and Nora Monterrosa, and his sisters Michelle and Ashley, stood with their attorney, John Burris, and tens of others in front of the Vallejo City Hall to publicly announce the suit.

“We just want justice for everyone,” Neftali Monterrosa said. 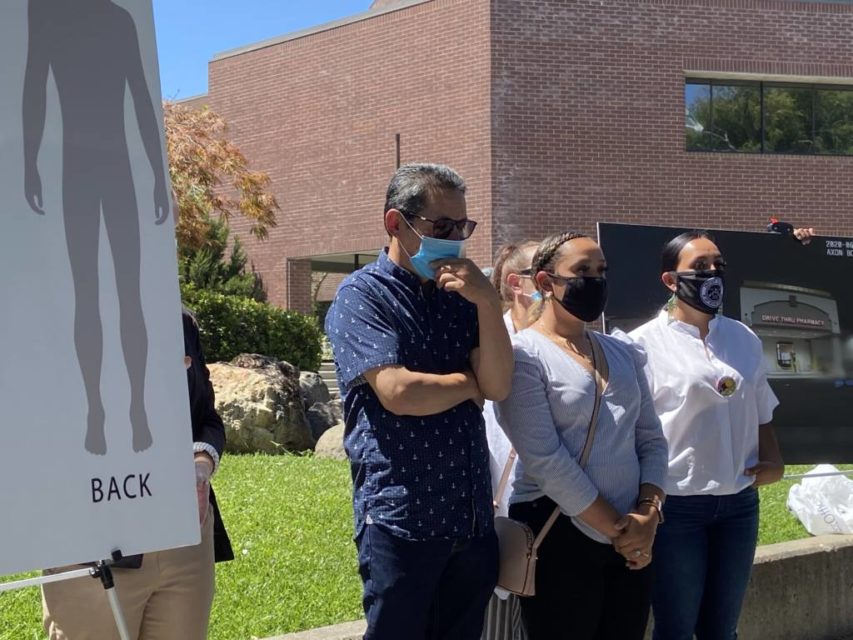 The Monterrosa family stands in front of a crowd at Vallejo City Hall to announce a civil lawsuit prompted by the death of their son and brother, Sean. Father Neftali Monterrosa (left), sister Ashley Monterrosa (middle), sister Michelle Monterrosa (right) and mother Nora Monterrosa (back). Photo by Annika Hom.

Tonn shot five rounds at Monterrosa through the windshield of an unmarked pickup truck after he and other officers mistook a hammer in Monterrosa’s pocket for a gun, Vallejo Police Chief Shawny Williams said in a video released by the department July 8.

In the video, Williams said Monterrosa appeared to be crouching in preparation to shoot. The lawsuit acknowledges how Williams’ initial statements about the incident describes Monterrosa as kneeling with his hands up.

Although two other officers were in the unmarked truck, the family sued Vallejo police officer Tonn because multiple outlets named him as the officer who shot Monterrosa through the windshield. Tonn, two other detectives and one captain responded to reports of looting at a Walgreens that night.

At the press conference, the lawyers said that Tonn had a history of shooting that should have prohibited him from even being on the scene. The lawsuit specifically said that Tonn had committed three prior shootings and was “never disciplined and never subject to re-training or remediation.”

“Is this a moment or a movement?” Burris said to the crowd in front of Vallejo City Hall. “This is an opportunity to evaluate the practices that have taken place in the city. Let’s hold officers accountable.”

The lawsuit also faults the city, which is in charge of the police department, for allowing a police department employee to get rid of key evidence. The windshield Tonn shot through was destroyed, and the pickup truck was put back into service despite the ongoing investigation.

California Attorney General Xavier Becerra said he will investigate the destruction of evidence, though he had declined to look into Monterrosa’s case after Solano County District Attorney Krishna Abrams’ asked Becerra to take over. Abrams recused her office from the case early on, citing the community’s lack of trust in her office. Becerra responded, stating that without a conflict of interest, this personal investigation was not in the state’s jurisdiction.

Nora Monterrosa told the crowd at Vallejo City Hall that she wanted Becerra to investigate her son’s case.

“Stand up, Xavier Becerra!” She said in Spanish. 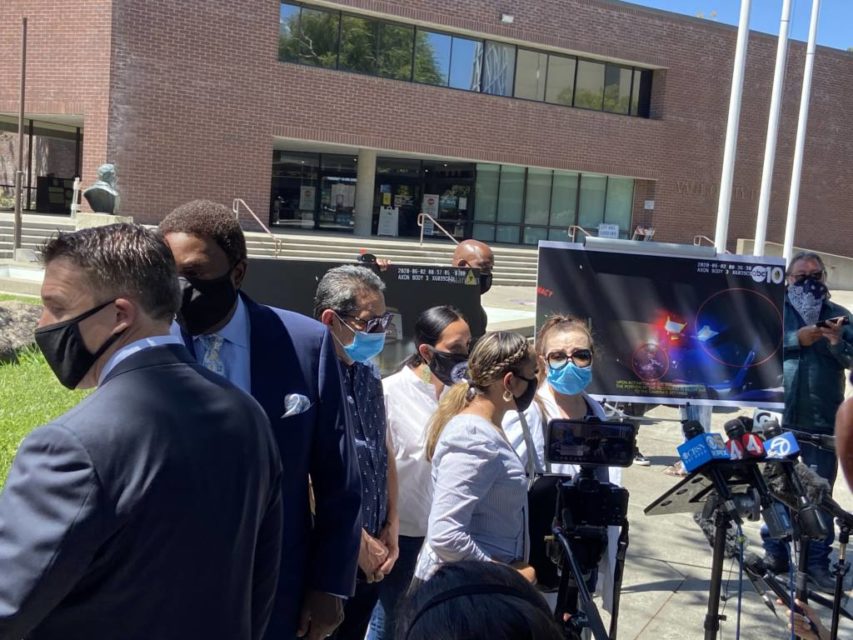 The Monterrosas at the press conference for their lawsuit. Nora Monterrosa had her message to the press translated by her daughter. Photo by Annika Hom.

Tens of people came to the press conference in support of the Monterrosa family and listened eagerly as Burris explained the lawsuit’s implications. He used a blown-up image from one of the officer’s body cameras as a visual. Some supporters donned shirts with an image of a toucan, a reverent nickname for Sean.

Erick Gutierrez, an El Sobrante resident, said he came after learning about the event online.

“Other families who have been in this position have not gotten the justice for their loved ones,” Gutierrez said. “Vallejo has been particularly bad.” 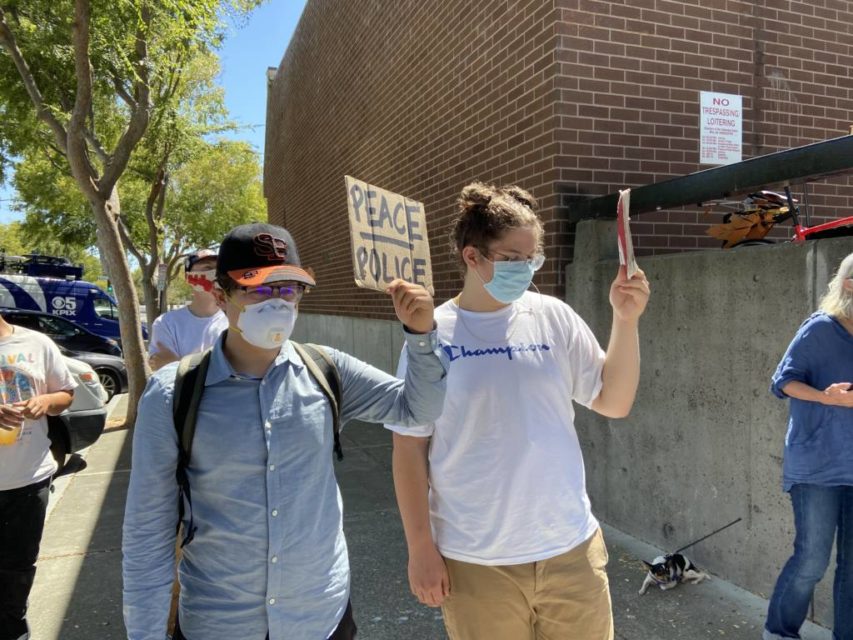 Erick Gutierrez, left, holds up a sign while listening to the press conference at Vallejo City Hall. Photo by Annika Hom.

Additionally, earlier this morning, Michelle and Ashley Monterrosa voiced support for a reinvigorated California Assembly bill that seeks to compensate victims of police violence and their families, and that will be heard at a Senate committee tomorrow.

At the assembly bill’s online press conference, which was joined by several people, including San Francisco District Attorney Chesea Boudin and California Assemblyman David Chiu, Michelle Monterrosa tearfully recounted her and her sister’s taxing experiences advocating for their brother’s justice for two months.

“No one should have to fight for justice and carry on the pain with no resources and support,” Michelle said at the bill’s press conference. ”No matter what the police report says, there were five victims when my brother was murdered.”

Despite the tragedy of the event, Ashley said at Vallejo City Hall that she believed this could act as a moment to draw attention to other injustices related to police brutality.

“He brought such a light,” Ashley said of her brother. “He died a martyr and died for a greater cause.”

Then, she addressed a message to Vallejo officers accused of exhibiting and promoting excessive use-of-force.

“Your time is up. Your downfall is coming.” 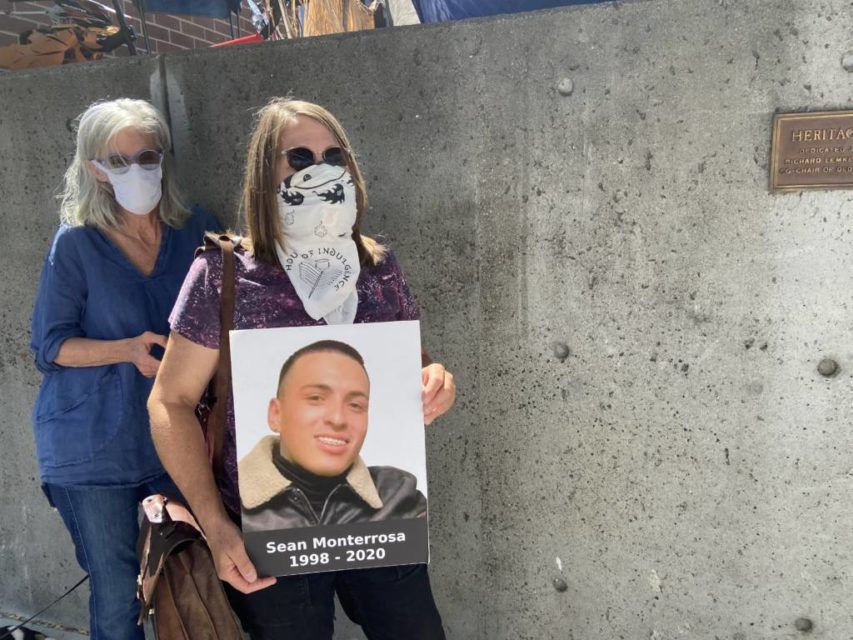 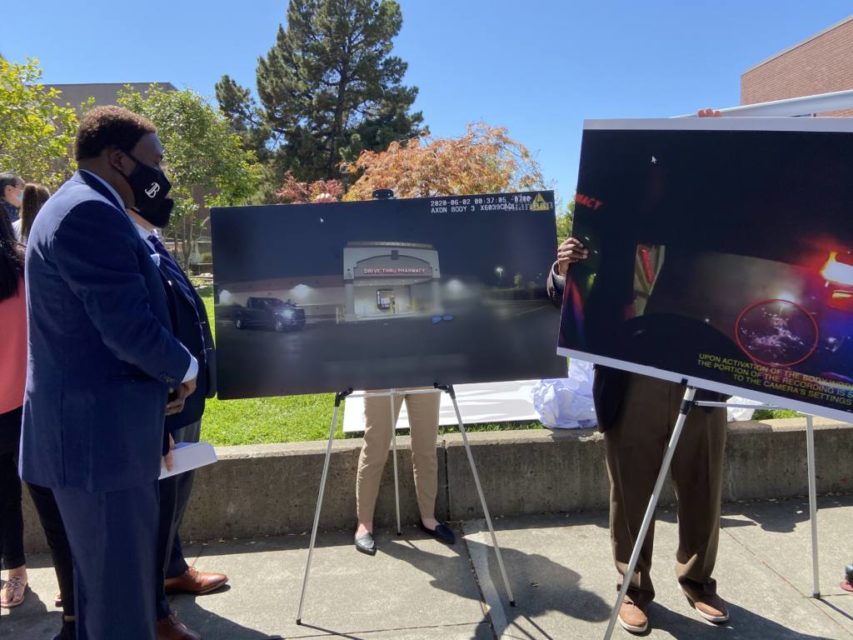 The family’s attorney, John Burris, goes over evidence to the crowd. Photo by Annika Hom. 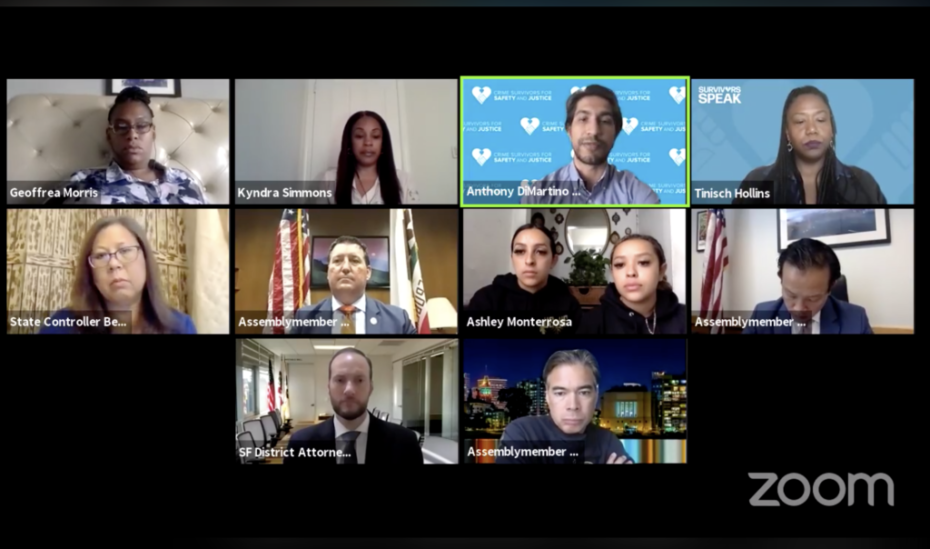 The Monterrosa sisters joined a press conference for a California assembly bill that would allow compensation for victims of police violence and their family.

Our team is working hard and enduring Bay Area traffic to be on-the-ground for these stories. Support our work directly here.