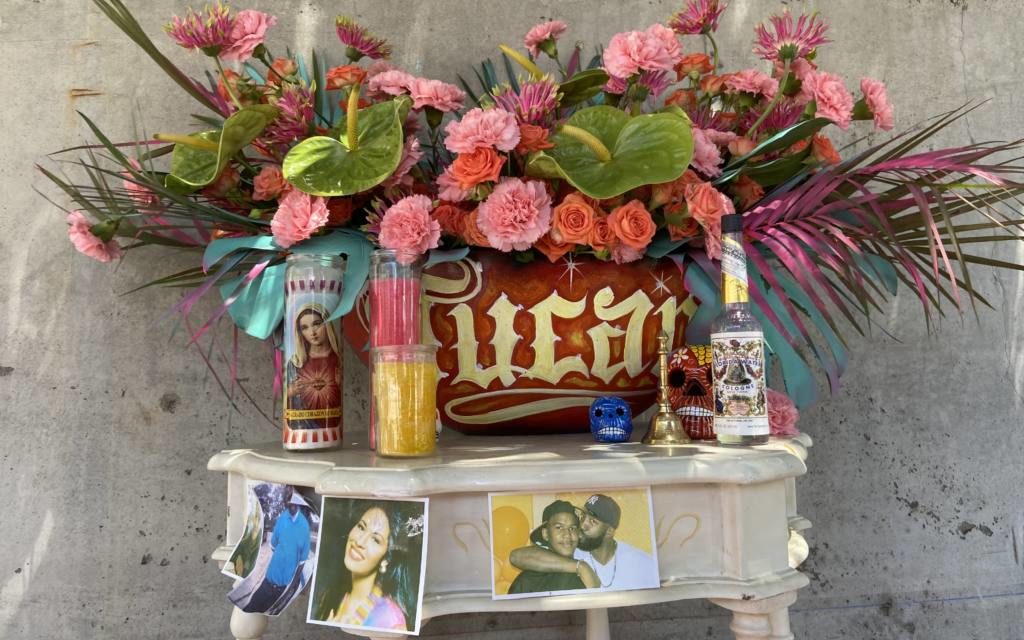 Napaquetzalli was asked by members of Horizon Unlimited to create this altar for Sean. The base says “Tucan” in graffiti to honor his love of art. Multiple people passed by and prayed and added their own images to the altar.

Much like his native Mission District, Sean Monterrosa was all about art.

As a kid, he constantly doodled the colorful Froot Loops cartoon Toucan Sam, which led a childhood friend to dub him “Tucan.” The nickname, spelled the Spanish way, stuck.

So when Monterrosa’s loved ones found out the 22-year-old was fatally shot on June 2 by Vallejo police, they decided to honor him with a day of his own — Tucan’s Day — which kicked off for the first time with a block party on the street where he grew up. Artists handed out free made-to-order tee shirts with spray-painted toucans and displayed paintings with his grinning face.

The memorial celebrations have continued: last week, his sisters Michelle, 24, and Ashley, 20, grinned in front of a new mural of him. That same weekend, Precita Eyes encouraged Sean Monterrosa-themed graffiti for its 24th annual Urban Youth festival.

“More than anything, artists in the city are doing what they can to keep his name alive,” Michelle said. 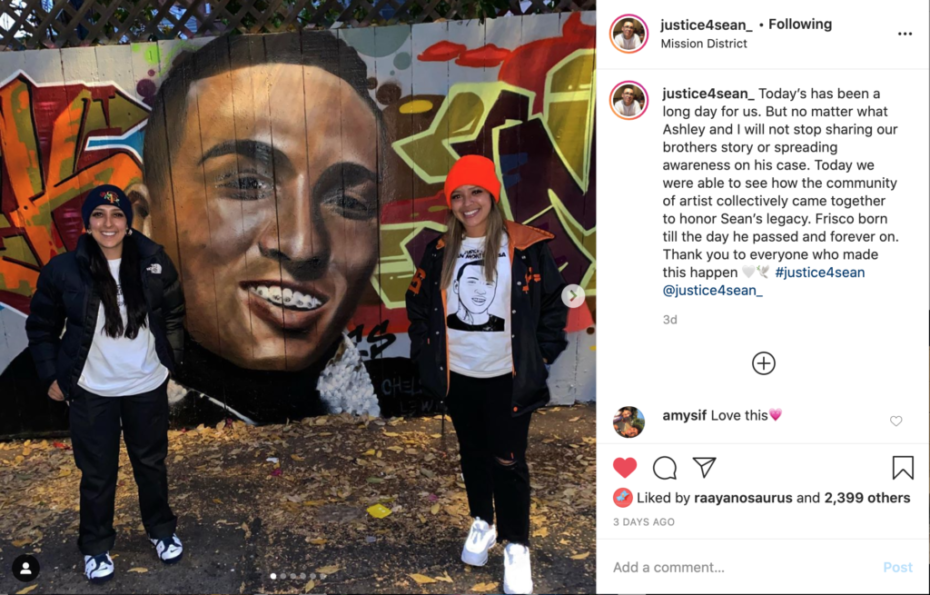 See “Photos from Tucan’s Day: a block party in remembrance of Sean Monterrosa.”

Monterrosa was born on April 24, 1998, to two Argentine immigrant parents, Neftali and Laura Monterrosa. Neftali, a Beatles fanatic, named Sean after John Lennon and Yoko Ono’s son of the same name. (Michelle was named after the band’s song, according to their father.)

The three siblings felt like triplets, the sisters said, sharing one room in the small apartment where they have lived since elementary school. As for many Latino families, quality family time was important.

“We were Mission babies,” Michelle said. “We loved being born and raised here.”

As a child, Monterrosa was shy but confident, and showed an early love of reading and art.

Monterrosa’s father treated him to superhero comics from a now-nonexistent store in the Castro. Neftali remembered how the quiet boy would intently read the newspaper on Muni bus rides or at the table. The pair would shoot hoops at Holly Park and grab cake at Dianda’s bakery on Mission Street for special occasions.

“He was kind of shy, but he says what he thinks,” Neftali said.

As a teen, Monterrosa had a vision of creating generational wealth to pass on to his family. His sisters said at age 14, he sold hot dogs outside dance clubs in the Mission before he could get a real job.

“He always had a big drive and hustled and tried to make a name for himself,” Ashley said. “To this day, he’s the most hardworking person I know.”

He went to the Academy of Arts and Sciences, Leadership High School and graduated from Independence High School in 2016. An old classmate, Angelica Castro, said she and Monterrosa would joke in Spanish class, and if they got in trouble, he would always take the fall.

Monterrosa volunteered at the Boys and Girls Club in the Excelsior and participated in Horizons Unlimited, a local Latino youth empowerment nonprofit.

From late 2014 to 2017, Monterrosa was a participant and later youth leader of Horizons Unlimited according to the organization’s program director Nancy Abdul-Shakur, who co-organized Tucan’s Day. His open and kind energy always kept him surrounded by his peers — many of whom were young ladies enamored with his good looks.

During Horizons discussions, it was clear his reading shaped his perspective. A few of his favorites were Malcom X’s autobiography, and The 48 Laws of Power.

“He was very focused on the knowledge of self,” Abdul-Shakur said. “He felt like that was what he needed to give himself more power.”

Sometimes, the three siblings would launch into ideological Socratic debates at dinner that were related to his readings.

“His mind was so powerful,” Michelle said.

Qing Qi, a Horizons mentor to Monterrosa and a locally based artist, remembered that Monterrosa came in like many of the Horizon youth — frustrated with discrimination and violence. She rapped and sang at Tucan’s Day.

He brought flowers to the family of his friend Vanessa Guillory, who was shot in 2018, Vanessa’s brother Sean Guillory Jr. recalled at Tucan’s Day.

“He was just elevating,” Qing Qi said, adding that he had a warrior spirit and was passionate about poetry.

It was important to Monterrosa to preserve his heritage — and the Mission’s — especially as gentrification seeped into the neighborhood, his sisters said.

As a young man, Monterrosa bought a 1970 Dodge Dart, which he wanted to fix up as a nod to the low-riders that cruised the blocks and he loved his tattoos. One showcased the city’s skyline and a clown girl, a common Chicano symbol his sister said.

“He always wanted to put other people’s art on his body,” Michelle said. “He was more than proud to show he was a San Francisco native.”

His tattoos and skin color sometimes led people to racially profile Monterrosa or mistake him as unfriendly, his sisters said. But any time a new neighbor moved in, he always knocked on their door and welcomed them.

After he graduated from Independence, Monterrosa moved in with his longtime girlfriend and took an 11-week carpentry pre-apprenticeship program with JobTrain that led to a construction job.

As coronavirus sent many people back home, Monterrosa returned home, too.

He got to celebrate his 22nd birthday this year surrounded by family and with his favorite dishes: Argentine style parilla barbeque and a dessert of brownies and ice cream. He also spent this past Mother’s Day with his mom, waiting an hour outside Dianda’s to pick up a cake.

At the end of May, George Floyd protests overtook the city, and Monterrosa decided to join. His last text message to his sisters asked them to sign a petition demanding justice for George Floyd.

On June 2, Monterrosa was near a Walgreens in Vallejo that was being looted. When officers drove into the parking lot, they shot multiple times through the windshield after claiming to have seen a gun in Monterrosa’s pocket, which turned out to be a hammer. Vallejo Police Chief Shawny Williams had claimed that Monterrosa was on his knees with his hands up when a bullet shot by an officer fatally struck him in the neck, but later said Monterrosa was in a crouched half-kneeling position that appeared like he was ready to shoot. It is unknown why Monterrosa was in Vallejo that night.

The family continues to demand justice for Monterrosa. Last week, Vallejo Police admitted that they had destroyed the windshield officers shot through, the Chronicle reported. Attorney General Xavier Becerra agreed to investigate the case after he heard the evidence had been destroyed. He originally declined to investigate even after the Vallejo District Attorney, Krishna Abrams, recused herself. Protests in the Mission and in Vallejo continue to be led by Ashley and Michelle.

The Monterrosas said that despite the deep pain caused by the tragedy, the community’s solidarity continues to be a bright spot.

On a random afternoon, Michelle and Ashley said they were driving down Valencia Street with their father, Neftali, when he discovered a poster gracing his son’s face with the word “Viva!” under it. 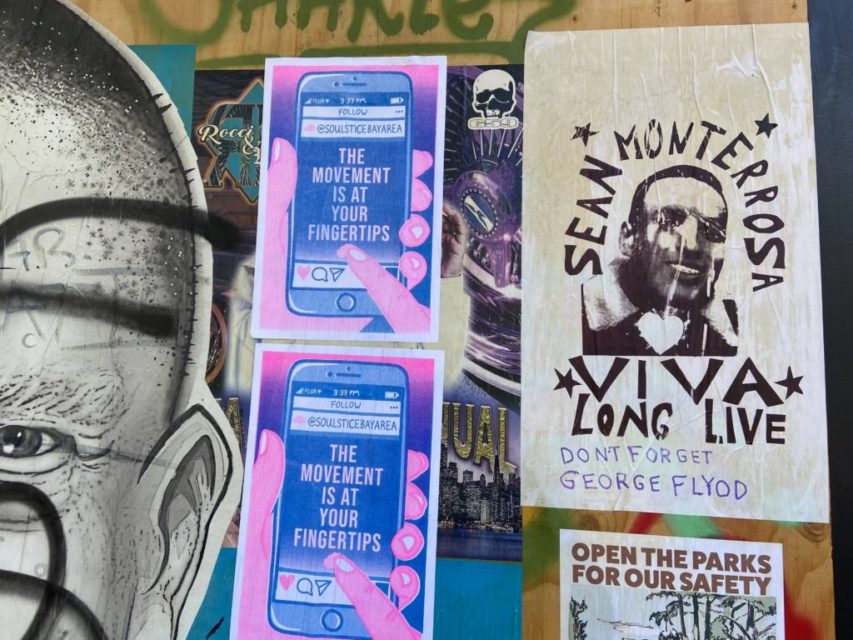 A poster commemorating Sean Monterrosa pasted to a board on Valencia Street. Photo by Annika Hom.