Will ‘San Francisco that Works for Everyone’ work for anyone? 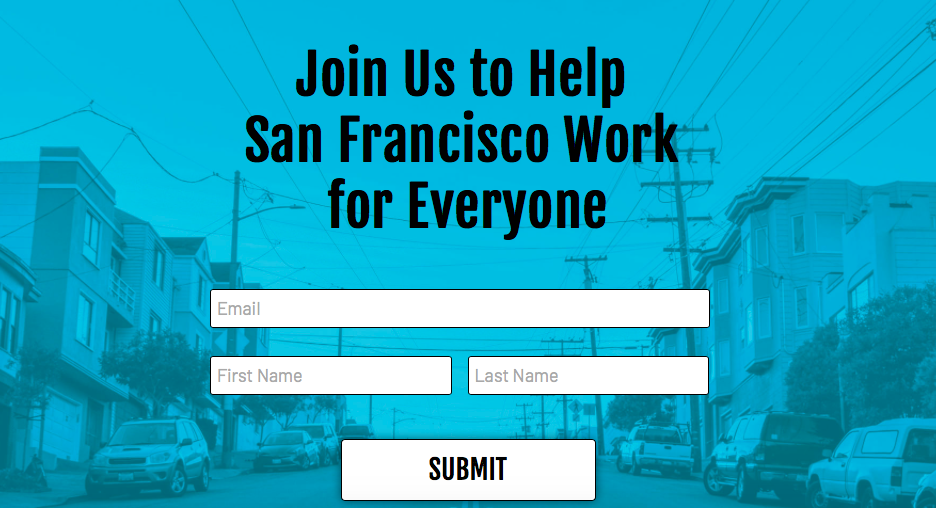 If you’re a San Franciscan of long enough standing, it’s déjà vu all over again.

“Everything comes back. What was hip and cool in 2002?” asks Jim Ross. Then he answers. “I remember the big album. I was just looking at it here. It was Avril Lavigne’s Sk8er Boi.”

But Ross didn’t have much time to listen to Sk8er Boi in ’02. He was occupied running Supervisor Gavin Newsom’s Care Not Cash ballot campaign which, magically, springboarded into Newsom’s subsequent mayoral campaign.

There is, in this town, always a beachhead established with a campaign questioning how much compassion toward the homeless is prudent — followed by the invasion of an individual campaign for higher office.

All this happened, more or less.

San Francisco is an ephemeral city, but it’s also a jarringly cyclical one. You just have to stick around long enough to notice this. Or read. Reading is always good.

As such, in 2002, a handful of San Francisco business barons and veteran politicos founded SFSOS (née Citizens for a Great San Francisco), with the stated mission of addressing this city’s rampant homelessness and filth — and the less-stated goals of redirecting that filth at city progressives who, inconveniently, kept winning district elections.

And this was a jarring statement. San Francisco is a city awash in tents and tent encampments — but not in Golden Gate Park. Is this a belated reaction to the encampments established in 1906? Or is it a proactive attack against currently nonexistent proposed future safe sleeping sites? 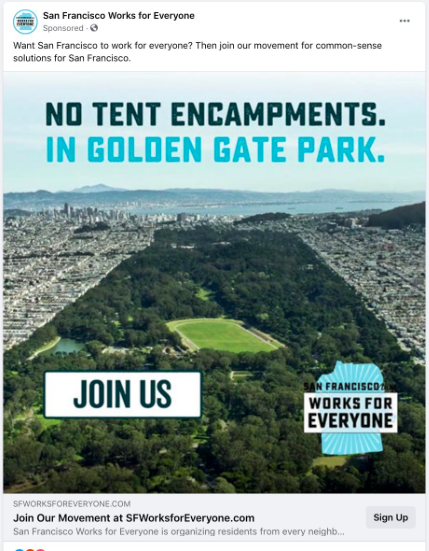 Ads of this sort caught people’s attention. And made some people angry.

These ads were the opening gambit of “San Francisco that Works for Everyone,” a 501(c)(4) nonprofit launched by wealthy philanthropist Daniel Lurie.

And that, too, was jarring. Lurie, you may recall, is the erstwhile CEO of Tipping Point, which raised some $260 million to combat homelessness. He has a solid reputation — and Tipping Point’s Chronic Homelessness Initiative is still very much unfinished business — so it was not intuitive for him to now disseminate lurid ads featuring sidewalk tents.

Tipping Point, which provides large grants and management assistance to nonprofits, picked up a reputation for effectiveness in part because it harnesses an evidence-based theory of change — it can tell you what solutions work, and why, and exactly what your money will be doing.

That’s not happening with “San Francisco that Works for Everyone.” Sources knowledgeable with Tipping Point and Lurie’s M.O. who perused this new website at your humble narrator’s behest were shocked Lurie would be soliciting funds for such an opaque and inchoate cause.

Lurie’s site, as it stands, is not brimming with solutions. Instead we get slogans and anodyne statements (“We believe in caring for the homeless without turning our streets and parks over to homeless encampments.”) and political messages of the sort that appeal to people riled up by images of tents and filth (“We embrace proven solutions like requiring those who are a danger to themselves and others to get treatment instead of indulging in ill-conceived polices [sic] like providing free drugs and alcohol.”).

“It reads like a political campaign,” sums up Ross. “Because it is one. You know, the question is: We don’t know what it’s a campaign for.”

Lurie did not respond to our requests for an interview. So that’s not a question we could ask him or his major donor Brandon Shorenstein.

Both Lurie and Shorenstein are scions of wealthy and politically powerful San Francisco families. And the names of the people we do know involved with this nascent effort also have deep and consequential ties to the city’s extant power structure — the people who piloted San Francisco into the place it is. Those would be, so far: political consultants Eric Jaye and Jack Davis; civil rights leader and erstwhile supervisor the Rev. Amos Brown, and spokesman Nathan Ballard, who used to do that job for Mayor Newsom.

Ballard tells me some 4,000 people joined the group just last week, — and that it’s wrong to think of this effort in a short-term manner based on whatever’s on the ballot come November.

“This is not a flash-in-the-pan IE [independent expenditure] for one ballot measure,” he says. “It is a 501(c)(4) designed to passionately and forcefully unite the city in advocating for the top issues most San Franciscans care about.”

He denies it’s exploitative to feature ads with homeless people’s tents. “Tents are emblematic of our failures as a city and a society to protect these most vulnerable people … it’s a mistake to confuse the reality of people suffering on the streets with division.”

The overall goal here, Ballard stresses, is “to be additive.”

The organization’s incorporation papers are not yet up on the Secretary of State’s website. But, we’re told, they’re a one-page affair carrying the signature of the very same lawyer some of the aforementioned consultants tasked with creating “Mission For All.” That was an ersatz grassroots organization heavily funded by the developer Maximus to promote the construction of its 1979 Mission Street project — the so-called “Monster in the Mission.”

That project, you’ll likely have noticed, remains decidedly unbuilt. City Hall observers emphasized that — and also emphasized these connections. San Francisco that Works for Everyone “is just Mission For All on steroids,” said one, dismissively.

We’ll have to wait and see how true or false that is.

This city, meanwhile, has generated no shortage of data regarding effective (or ineffective) solutions to homelessness since the days of SFSOS. None of that is on display on San Francisco that Works for Everyone. We are assured that such scholarship is coming, though. That’s welcome news. Again, we’ll just have to wait and see.

Speaking of waiting and seeing, is Daniel Lurie gonna run for office? This subject has come up before —  And, as in the past, his spokesman, Ballard, says Lurie has no plans to do so.

But plans change. And even if Lurie’s current effort is indeed a far-reaching attempt to build a movement — that doesn’t preclude shorter-term byproducts.

Perhaps as soon as November.

Mission For All t-shirt at City Hall rally, 2018. Photo by Julian Mark.

“Tax increases may be necessary in the future, but not before we’ve taken a hard look at current spending,” reads San Francisco that Works for Everyone’s website, “starting with the requirement that every city department be audited regularly.”

That’s kinda funny, because one of the more lasting legacies of SFSOS, Prop. C of 2003, established the city services auditor in the controller’s office — and mandated a set-aside for it that, this year, will come out to some $27 million.

San Francisco’s budget is maniacally large and there is, no doubt, some degree of sloth and nefariousness going on. But the claim that we simply don’t know where the money is going is overblown; it’s a cynical and tried-and-true method to confuse and enrage rubes about taxes — taxes that, by and large, are aimed at the very wealthiest among us.

San Francisco, after all, is an ephemeral city, but it’s also a jarringly cyclical one.

As such, we do have several tax measures on the ballot this year. They include: a consensus gross receipts tax;  a tax on companies with high-earning CEOs; and a beefed-up real-estate transfer tax on properties of at least $10 million.

You probably would not pay any of these taxes. But people in the strata of the Luries and Shorensteins and their peers and donors very well could. And, since San Francisco that Works for Everyone is a 501(c)(4), donors need not be revealed if they don’t wish to be.

All of these tax measures are facing only the most token of opposition — at the present. So, it wouldn’t be surprising for real-estate interests, say, to surreptitiously fund San Francisco that Works for Everyone if it helps to gird voters against annoying left-leaning candidates and/or foster an anti-tax mindset in November. (Just as it wouldn’t be surprising for proponents of the transfer tax to note that 555 California St., once a Shorenstein property and now co-owned by the Trump Organization, is on the block — meaning city voters could literally stick it to Donald John President.)

And yet, are the complaints San Francisco that Works for Everyone makes about this city’s status quo out of place? Not at all: All of these concerns, while surface-level at the moment, have some degree of validity.

The problem is, until proven otherwise, cyclical efforts like this one are part of the city’s status quo as well.

Update, Sept. 8: Daniel Lurie on Monday at 5:49 p.m. sent out a terse e-mail announcing he had cut ties with San Francisco that Works for Everyone, the organization he announced the formation of only last month. His email is printed in its entirety below.

As close friends and trusted colleagues who have supported my efforts over the past few weeks, I wanted to share that today I am stepping down from my role leading the newly formed organization San Francisco That Works For Everyone.

I have worked diligently over the past few months to launch an effort that activates San Franciscans to demand transparency in city government and force city leaders to generate proven solutions to homelessness, improve access to health care, educate our kids and keep our neighborhoods safe for all.

While I remain committed to that vision and continue to support its mission, in my experience leadership by committee does not allow for bold decisions to be made in real time. I believe in decisive action to address the severe challenges facing our City and wish the organization ongoing success in its efforts.

Thank you all for your commitment to building a San Francisco we can be proud to call home, I look forward to our continued work together.

We are told that this is the crucial portion: “…in my experience leadership by committee does not allow for bold decisions to be made in real time. I believe in decisive action to address the severe challenges facing our City …”

In essence, we are told, this equates to Lurie being unable to unilaterally push the organization regarding strategy and content — and departing. Specifically, Mission Local is told that Lurie was pushing to remove from the site this video from the Manhattan Institute’s City Journal, which he worried is racist. He was rebuffed.

“We heard his concerns, and we showed the video to The Rev. Amos Brown, who is the head of the NAACP in San Francisco,” said Eric Jaye, a consultant for San Francisco that Works for Everyone who also helped to organize the group. “And Rev. Brown said he thought the video was a fair and powerful description of the situation now in San Francisco and should not be removed.”

Mission Local was unable to reach Lurie, and his spokesman Nathan Ballard — who has also decamped from San Francisco that Works for Everyone — referred us back to Lurie’s Monday letter when asked for details.

Brown is now the chairman of the organization, which is still looking to fill out its board. Some 5,000 members have now joined.

When asked his goals, Brown replied “We will bring strength, sanity, and substance to San Francisco, in an enlightened, engaging, encouraging, engaging, excellent way.”