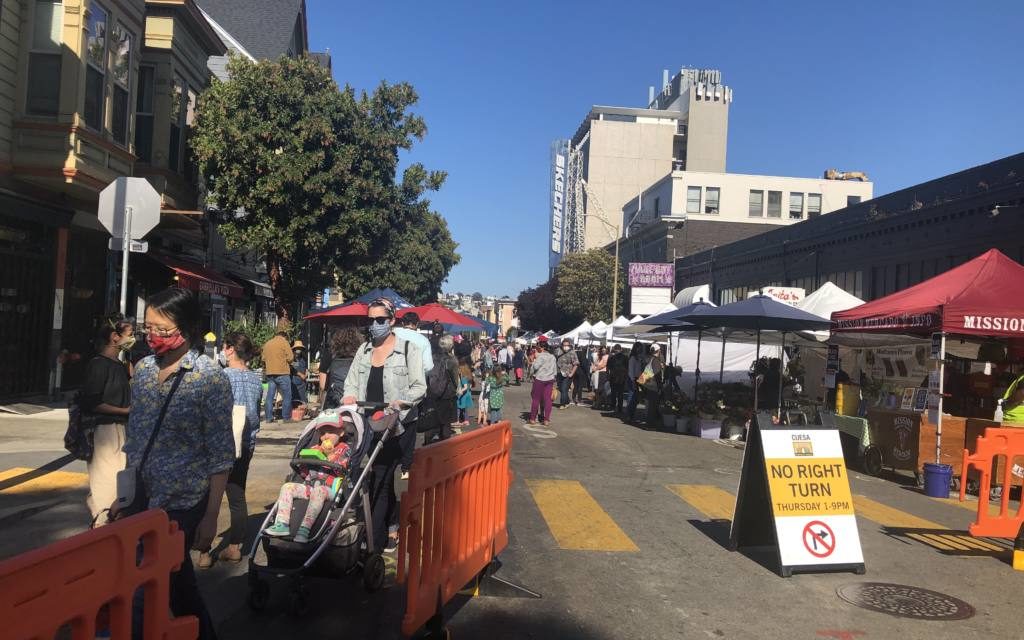 More than a decade ago, while working for the San Francisco Planning Department on the Mission Streetscape Plan to create more public spaces for pedestrians, Mission District resident and urban designer Ilaria Salvadori decided that the stretch of Bartlett Street between 22nd and 21st streets was a perfect place for a farmers’ market.

Community members liked the idea, and Salvadori organized 20 to 30 representatives of community stakeholders, such as La Cocina, and small businesses such as Escape from New York Pizza and Loló, to create the Mission Community Market.

The newly formed coalition of community members initially raised money through a block party to launch the Mission Community Market in 2010, later securing fiscal sponsorship from the nonprofit San Francisco Parks Alliance. This week it celebrates its 10-year anniversary, having grown from the 10 to 15 original vendors to around 30, and spilling onto 22nd Street with some 300 people who visit on Thursdays from 3 to 7 p.m.

At first, the Mission Community Market was a bit of a ragtag operation, relying entirely on volunteers to provide youth activities, health programs, and performances by students from local schools.

“For the first three years, the market was surviving,” said Apolinar “Poli” Yerena, one of the original farm vendors, Yerena Farms.

The big difference for him and the other vendors, he said, was when they expanded onto 22nd Street in 2014, allowing for more space. Then, in 2018, the nonprofit Center for Urban Education about Sustainable Agriculture (CUESA), which runs a lot of the city’s markets, took it over.

Mission Community Market hit its 10th anniversary last month, and is celebrating the occasion this Thursday, which coincides with National Farmers’ Market Week. Kicking it at the market! June 2011 on Bartlett Street

For Salvadori, who has an 11-year-old son, the market feels like her “second child,” and the anniversary is like watching that child grow up.

Under normal circumstances, they would be doing something a bit more festive, said market manager Andrea Akers. But with COVID-19, they’ll most likely just put up streamers, hand out party hats for anyone that might want them, and do a couple of giveaways.

We want to “celebrate not only the market being here, but the sellers who’ve been here from day one as well,” said Akers, who’s worked at CUESA for over a decade now and just started managing the Mission Community Market this year.

“It’s more community-bound,” she said, because they mainly get customers who actually live in the neighborhood, unlike other markets that attract tourists, like the Ferry Building.

Pre-COVID, the market had a special tent for kids to sit and color while their parents shopped, a food stand where they handed out free samples, and live music. “We wanted it to be more open, welcoming, not just in-and-out,” she said. But that was before the pandemic. Now, folks don’t linger.

Fresh Smoked Wild Salmon vendor Dennis Wang has been with the Mission Community Market almost since the beginning, he said. Wang works in other markets in San Francisco, such as Fort Mason and the Fillmore, as well as throughout the Bay Area.

But the Mission market is special to him. “People are very nice, very friendly,” he said. “I love this market.” He makes more money at others, but this one makes him happy, he said.

The love is mutual. Wang knows his regulars so well, they often text him their orders so he knows what to set aside for them. One such customer is Jesse Wolff, who’s been picking up orders of Wang’s lemon pepper smoked salmon for years.

He gets three packages now that his family is eating more at home, right nearby on Capp Street, he said. It’s the only product he consistently gets each week.

“My son and wife love it,” said Wolff. Pre-COVID, Wolff would bring his son with him to the market, and Wang would always offer him a free sample. “He misses it,” Wolff said. “He’s like, ‘Why can’t I come?’”

Wang likes seeing regulars’ kids, like Wolff’s son, grow up over the years. Even with masks, he recognizes everyone.

The relationships between the vendors are also really important to him. They look out for each other, he said.

A newcomer to the Mission Community Market, Rafia Yusif of Delightful Foods Bakery, especially values that camaraderie. Yusif sells pastries and baked goods, like pecan and berry pies, with her daughter, and just joined the market towards the end of the season last year, in October.

She liked how the organizers of the Mission market ran things. “They care for people,” she said.

Yusif has grown to feel like her customers and fellow vendors are a second family. She loves trading goods with the other vendors, like olives from the Italian kiosk across the street, or mint from one of the farm stands.

“Right now if I fall down, my family is not here to pick me up.” Besides her children and her husband, Yusif’s entire family lives in Ghana.

“The farmers, the pasta man, everyone is here,” she said about the bustling market around her. “They are the ones who are going to pick me up.”