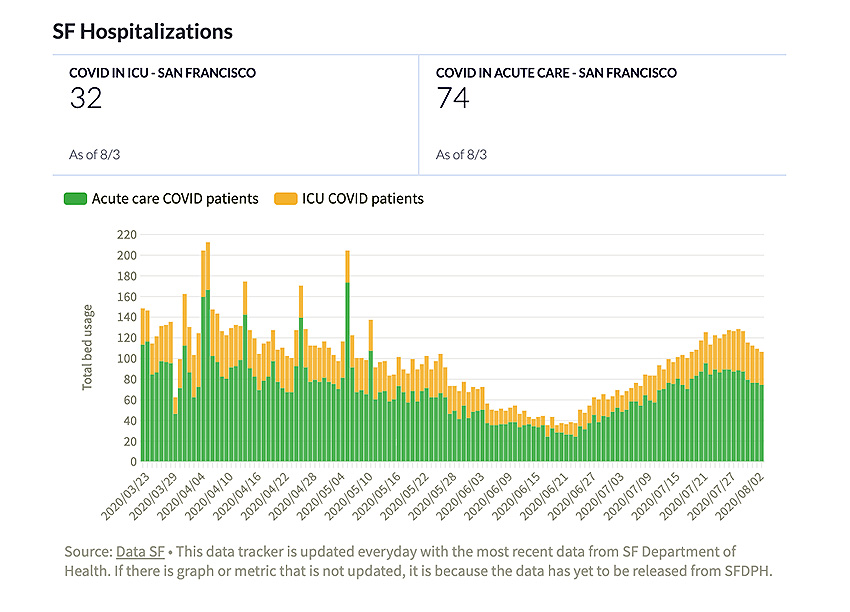 In uncertain times, numbers can often provide the sense of fact, and for some, even truth. They don’t appear as ambiguous and fluid as words.  California has, at least for the time being, shattered that illusion. Has the curve flattened in California? Is the virus receding? The answer is . . . Maybe.

Unlike numbers, people make a difference.  As Lydia reports, collective action by locals involved in their communities, with the support of professionals and officials, has been, and will be, one of the most concrete ways to slow transmission throughout the city. Hats off to the folks in Sunnydale and the Latino Task Force. They deserve our support.

Fourteen cases were added to Mission for an overall total of  994.

If you haven’t read Joe’s article on the California numbers, you should be aware that these numbers, including our Bay Area numbers, especially the “new case” figures are probably low. How low? Who knows? BTW, San Francisco does not use the state reporting system so we don’t have that problem.

Again, the delays involved with obtaining test results oblige us to backtrack a week to get a reliable figure. The seven day average for tests coming back positive on July 29was 3.85 percent. The positivity rate has been holding steady, just below 4 percent for the past few days. The average, since March, has been 3 percent.

Availability data is still not available. Today’s report shows 32 COVID confirmed and suspected patients in ICU and 74 in Acute Care. Both represent modest drops. The good news, if true,  the rate of weekly change in Covid positive patients, for the week ending 8/3 has decreased by 9 percent. The DPH goal is an increase of no more than 10 percent.

The R number has remained steady; a reliable indicator that, despite claims by Dark Ages Donald, the virus will not be disappearing any time soon.

Of the 62 deaths, 56 had one or more underlying health conditions, and 4 were unknown.

The Chron has an interesting, and inconclusive, article on the low case numbers in Chinatown, which has the second-lowest numbers in the City after Seacliff. There have been no articles explaining Seacliff’s success.