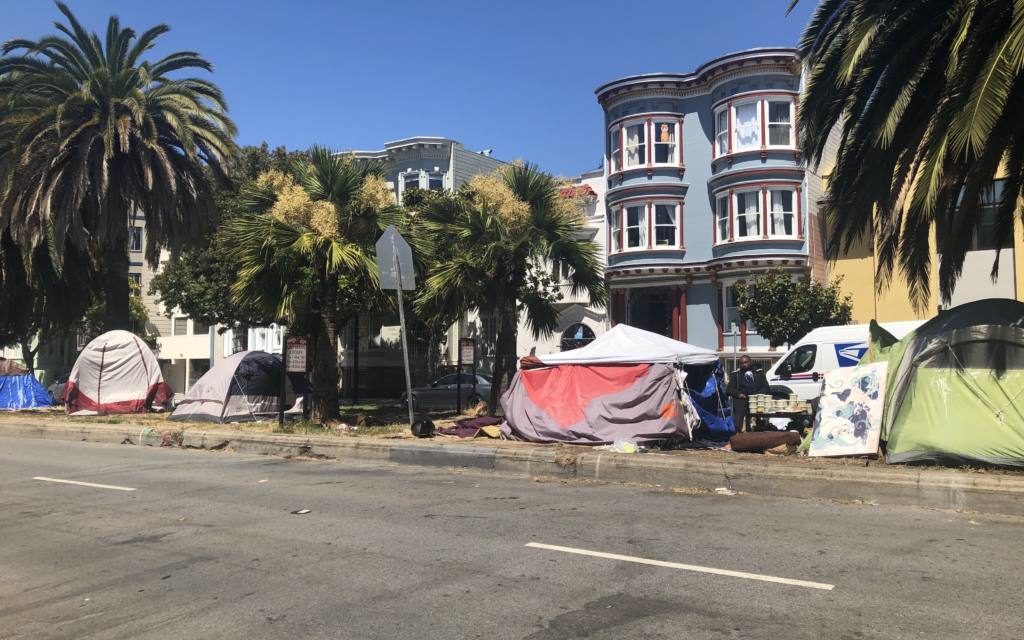 Tent encampment set up along a median at 16th Street and Dolores.

Only a little more than a month after opening, the “Safe Sleeping Village” in the Everett Middle School parking lot is preparing to close.

The site opened May 29 and will close July 14, as San Francisco Unified School District staff prepare for the fall semester. Run by Dolores Street Community Services, it was meant to be a temporary solution to provide safer sleeping options to unsheltered residents who otherwise were sleeping in overcrowded unofficial tent sites and on sidewalks in the Mission.

The site’s location and size were convenient, but the temporary nature of the site made it a challenge, and nearby encampments never disappeared. In some cases, they grew.

At its highest occupancy, 36 of the 40 available tent spaces in the parking lot were filled, said a San Francisco Department of Emergency Management spokesperson over email.

The site was never full, the spokesman said, because homeless residents living nearby in tents knew it would be temporary, the spokesperson added. Outreach for the site was restricted only to unhoused residents of the Mission District and the Castro at the request of the SFUSD.

Chelsea Crumpler, an outreach coordinator for the Coalition on Homelessness, attempted to place an unhoused Mission resident there recently, “And they were like, we’re not going to take any more people because we’re going to close in two weeks,” she said.

Even the city opted to place residents in longer-term shelter options whenever possible.

There doesn’t appear to be an alternative opening up. “In the Tenderloin, there’s talk of Eddy and Turk, the empty parking lot there, but not in the Mission District,” said Crumpler.

“They should have thought long-term,” she said “It’s really just unconscionable to think that a bunch of people could be just thrown back out onto the street.”

District 8 Supervisor Rafael Mandelman feels the results of the Everett site have been mixed. “On the one hand, outreach workers and police were able to convince a number of people who had been camping in the neighborhood to come onto the lot,” Mandelman said in a statement over email. “Many of these folks were extremely medically vulnerable.”

Mandelman said that the city staff and their nonprofit partners have been working with the campers on the lot to connect them with services and transition them to other locations prior to the site’s closure.

During this process, some of the encampments in the neighborhood have been thinned or reduced, he said.

But it wasn’t enough, he acknowledged. “Some of the most intractable and disruptive encampments remain and, in some cases, have grown over the last two months.”

Through the time it has been open, tent encampments nearby on Dolores, 16th Street and even on the same block as Everett, remained.

Crumpler’s received phone calls from housed people, complaining about those growing encampments. She thinks perhaps they’ve grown because of the movements in the Tenderloin. People who didn’t get into or don’t want to get into hotels or safe sleeping sites in that neighborhood, “are leaving to go set tents up out there.”

Mandelman added that many of Everett’s neighbors feel, fairly, that the Safe Sleeping Village has not lived up to what they were promised.

“For myself, the effort raises serious concerns about the City’s lack of a sustainable, scalable and effective strategy around encampments citywide,” Mandelman said.

According to the Department of Emergency Management spokesperson, current site occupants will be offered alternative shelter options through Homelessness and Supportive Housing Homeless Outreach Teams.

Demobilization and breakdown of the village will happen after July 14.