It is the only site of its kind operating in the district and aims to house 50 people, according to Max Barnes, communications manager at San Francisco Mayor’s Office of Housing and Community Development.

The site, which consisted of about 22 tents on Tuesday morning, is equipped with five bathrooms and showers as well as hygiene stations, which are cleaned regularly by two full-time janitorial staff on site. Privacy shields have been attached to chain-link fences on the existing parking lot walls.

The village is meant to ensure access to food, water, and regular health and sanitation services, according to the legislation. The Salvation Army provides three meals a day. Each person who enters the site has their temperature taken daily, and residents are provided with personal protective equipment.

The Everett location was chosen “because of the significant number of people who are already camping on and immediately around campus, and have been there for quite a while,” Tom Temprano, legislative aide for Supervisor Rafael Mandelman, said. He mentioned numerous encampments around the middle school, some of which existed pre-COVID-19 but which have now swelled in size.

“The Safe Sleeping Village is a temporary emergency measure, and as this pandemic evolves we will continue to adjust our response in order to find ways to help people out of homelessness and into care and shelter,” Barnes wrote in an email.

This is the third official safe sleeping site to open in San Francisco after the Board of Supervisors unanimously passed a resolution on April 28, sponsored by Supervisor Mandelman, to establish safe sleeping sites for unsheltered people to “encourage social distancing, improve sanitation, and slow the spread of COVID-19.”

The same day, the San Francisco Board of Education passed a companion resolution by board President Mark Sanchez committing to partner with the city and make SF Unified School District property available for these sites.

Since then, two other sites have opened, the first on Fulton Street between Hyde and Larkin, which began accepting people in mid-May. The second encampment, located at a former McDonald’s at Haight and Stanyan streets, initially faced a lawsuit from residents, merchants and property owners. However, the lawsuit has been dropped, and the site began accepting clients on May 29. 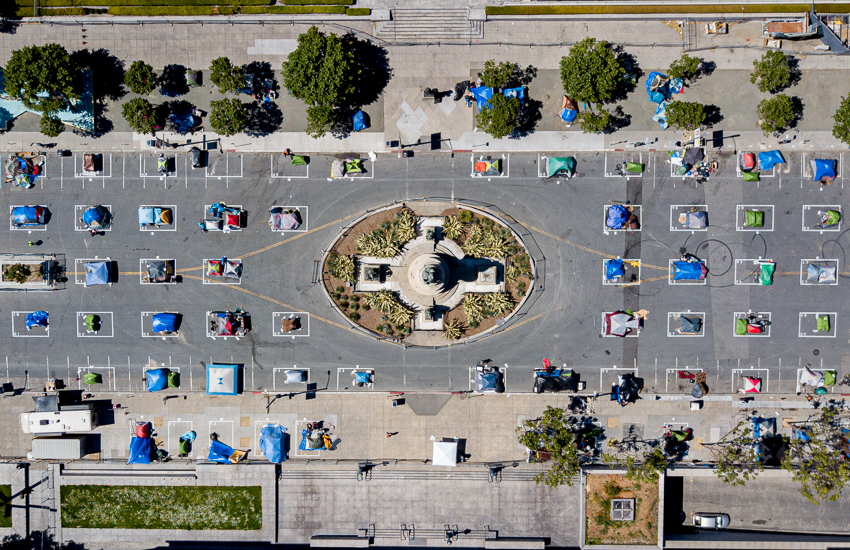 Bird’s eye view of tent camp at Fulton Street between Hyde and Larkin.

With teachers and other Everett Middle School staff returning mid-July to begin planning for the fall, the site will be temporary.

Temprano said that Jeff Kositsky, manager of the Healthy Streets Operations Center, plans to make sure that “no one is exited from this site back onto the street using the typical tools” for helping homeless people find housing. These tools include Adult Coordinated Entry assessments through the city’s Homelessness Response System, the Homeward Bound Program, and potential relocation to shelters as they reopen.

In the meantime, District 1 Supervisor Sandra Lee Fewer called on the city’s Recreation and Parks Department as well as the Real Estate Division to come up with lists of potential locations for future Safe Sleeping Villages. A combined total of 42 locations were submitted; 26 suggestions were part of SFUSD grounds, and another 12 were parking lots.

The push for these sites comes in the wake of the COVID-19 pandemic that has left public health officials scrambling to figure out how to safely house homeless people while shelters and other living spaces try to maintain CDC safety measures. Mayor London Breed tweeted that shelter capacity has been reduced by 76 percent to enforce physical distancing and that shelters have stopped taking in new people.

Mandelman has been vocal about the creation of safe sleeping sites for people who are housing insecure, including when he tweeted on April 27 about the death of an unhoused woman who was found on the Everett steps. In a guest opinion piece for the Bay Area Reporter, he wrote about the desperate need for housing, particularly in the Castro, in the current situation. However, with limited resources and few other solutions, Safe Sleeping Villages will have to do for now.

“It may seem paradoxical to argue that the solution to the proliferation of street encampments is to sanction, regulate, and manage them, but I believe it is, at least for now,” Mandelman wrote.