Even Philz Coffee got in the mood. Photo by Courtney Quirin.

When a former shift lead at the Mission location of Philz Coffee, Robert Thumas, saw an image that said “What’s your favorite iced coffee drink, because ours is, ‘Arrest the cops that killed Breonna Taylor,’” he saw no issue with posting it to the store’s Instagram story, which he managed.

He added his own comment: “No more police discounts, please” *barf emoji*, referring to the 20 percent discount Philz Coffee gives law enforcement and other groups. A few weeks after that post, Thumas met with his boss and Human Resources on a Zoom call to discuss the incident. Thumas acknowledged that he stepped over a line and offered to resign from managing the store’s social media account. Nevertheless, he was fired.

The image that Robert Thumas posted on the Mission Philz store’s Instagram that allegedly led to his termination.

The firing was one of four terminations Mission Local uncovered that transpired over differences with Philz management on the company’s policies toward the police. But even those who remain with the company said there is widespread discontent with how Philz has treated issues around race and law enforcement.

Indeed, the company acknowledged as much this summer, when it began several companywide forums on race and the police. The conflict between employee and corporate values is one that many companies are struggling with in the post George Floyd era.

“I was assuming that I was reflecting the beliefs and culture of our store,” Thumas said. “It was a given we were going to support Black Lives Matter and be against police brutality.”

He pointed to examples like a tweet from CEO Jacob Jaber on May 31, “We at @PhilzCoffee stand with those who are speaking out against racism and demanding justice for George Floyd.”

1/ We at @PhilzCoffee stand with those who are speaking out against racism and demanding justice for George Floyd.

George Floyd’s senseless murder is yet another disturbing and painful reminder of systemic oppression and racial injustice.

But while Jaber’s tweet may have aligned with staff like Thumas, it contrasted against a longstanding culture at Philz that has embraced the police.

Like many other coffee shops, Philz hosts “Coffee with a Cop,” events where community members can casually fraternize with police officers in hopes to foster better relationships with them, a practice some police reform advocates approve of.

But there were other policies that seemed to go beyond encouraging engagement: coffee blends designed with San Francisco’s police and fire departments in mind. Code 33, the blend for police, was discontinued years ago to consolidate the menu, though Greater Alarm remains for SFFD. 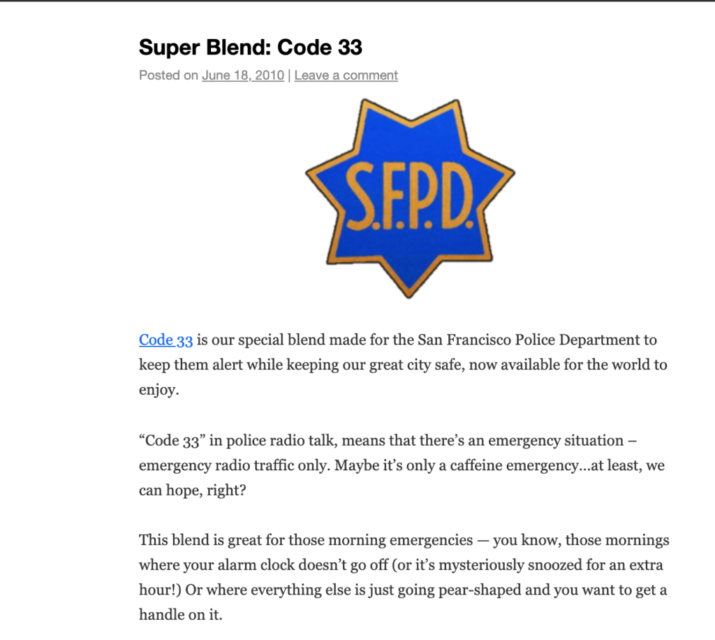 A screenshot of a 2010 post on an old Philz blog explaining the inspiration behind Code 33.

For years, pinning law-enforcement badge patches on store bulletin boards was also common practice, as well as a company-wide 20 percent discount for police officers and firefighters. Unofficially, management later extended the discount to other groups like teachers, EMTs, and Facebook and Palantir employees, depending on the store.

So when Jaber tweeted out his support for Black Lives Matter, some baristas saw the company’s support as “performative.”

They argued that the store’s police-inclusive policies directly opposed key values within the Black Lives Matter movement, which champions defunding and decreasing reliance on police departments.

A Philz representative said that as a company centered around “inclusiveness,” they support both the Black community and police officers and discrimination against either group was unacceptable. Yet some employees said that when they actually question current policies that favor police, it has come with consequences.

Jaber told employees during a June 23 regional employee forum for Southern California that each store could decide whether to display police patches, but management’s actions went against that, according to employees.

Lauren Hartz, a former Philz barista in Santa Monica, told Mission Local she had to “pull teeth” to initiate conversations with her boss about removing police patches at her store.

“By displaying these badges in the store, you’re clearly showing where your allegiance lies,” Hartz said.

Her boss ultimately removed all the store’s patches touting other cities’ police departments, except for Santa Monica’s. On July 1, though, Hartz said her boss called her into the office and said she had a “negative attitude” after she questioned the patches. Moreover, he said, this was exacerbated by raising questions about the store’s lack of social distancing. He told her to reconsider if she wanted to work at Philz, and she quit that day.

Three baristas in Costa Mesa also clashed over the patches. The baristas, all women of color, took down police patches pinned to the community board, cut them up, and threw them away the week of June 25. They were fired shortly after for “destruction of store property.”

A Philz representative denied the Costa Mesa incident occurred. Philz said the company would never fire someone who expressed support for movements like Black Lives Matter.

Later, on July 13, the company sent an email to active employees that noted police officers had been a part of the company’s diverse customer-base and that displaying law enforcement badges has been an enduring store-led decision. The email underscored any store’s right to address the issue of patches.

“The most important thing is how we treat one another,” the email stated.

Discounts and other incidents

Along with the patches, the discounts mentioned in Thumas instagram message have also been a problem for employees.

Maiya McQueen, a former barista at the Philz at Folsom and Beale Streets in San Francisco who was laid off last week, butted heads with Jaber in a series of emails asking him to do away with the police discount, and do more for Black employees like herself.

“When a Black person tells you that you are being performative or racist, it’s not a moment for you to debate that,” McQueen said.

Philz told Mission Local it would start the process of eliminating discounts for all non-employees in August.

Besides the police, workers alleged other racist encounters at stores.

McQueen said she was told by a shift lead that her stance was “unapproachable” and she should “not present that way” again. She reported it to her manager, who handled it “beautifully.”

Rowan Allen, another laid-off barista who worked at Ocean Avenue in San Francisco, said Black employees at Philz were confronted with microaggressions in their experience.

At Allen’s former location on Front Street, the barista recalled that when two Black coworkers approached the store, the shift lead said, “‘Hey, look at those thugs.’” Allen claimed to have reported the incident, but “nothing came of it.”

Several former workers chimed in on social media, attesting to this attitude.

To better address some of the criticisms, Philz highlighted its launch of a Diversity, Equity and Inclusion resource center, an anonymous hotline reporting tool, training, diverse hiring and a donation initiative, in the July 13 email to active employees.

These changes, however, were too late for Thumas and the other employees who quit or were fired in the last few months.

“I know a lot of people love Philz, and I do, too,” Thumas said. “But I think people should understand what’s going on.”