Indoor restaurants and outdoor bars will not reopen next week 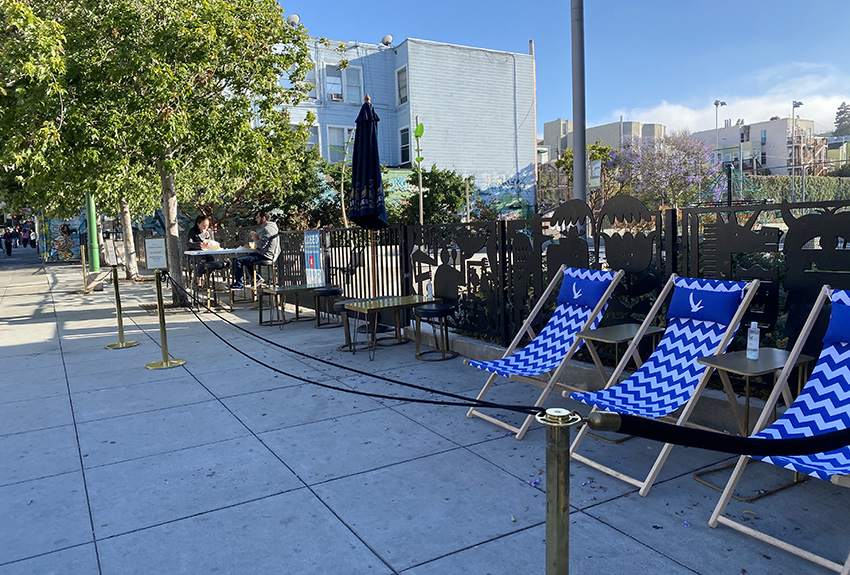 It’s actually the dining area for the BeeHive. Photo by Lydia Chávez

Indoor restaurants and outdoor bars will not be returning to San Francisco next week as originally planned. Other businesses in the city’s reopening schedule, including nail salons and museums, remain paused indefinitely as COVID-19 cases continue to rise, officials said Tuesday.

The reopening pause was first announced last week, and Eater San Francisco reported yesterday that the previously-announced July 13 date for indoor dining was now off the table as well.

“If we see the numbers stabilize or decline in any way, we will reevaluate that information and begin the process of determining what businesses can open,” Mayor London Breed said, but emphasized that for now the city could not allow reopening to continue.

“Indoor dining is an activity where people typically gather with those outside of their households, take down their face masks, and spend time in close proximity,” said Dr. Grant Colfax, director of the San Francisco Department of Public Health.

That would essentially be a recipe for increased spread for the virus.

“Restaurants are a vital part of our city’s culture and economy,” Colfax said. “I know from experience what it means to wait tables and live by the service tips that are provided.”

More than 153,000 people had filed for unemployment in San Francisco during the pandemic, Breed said. According to recent census figures, that’s 20 percent of residents over the age of 18 in the city.

Colfax said the city did everything it could leading into the holiday weekend to encourage people to celebrate as safely as possible but, “unfortunately, there were still dozens of gatherings throughout the city, and many people were not wearing face coverings or masks.” The effects of those gatherings on COVID-19 cases won’t be known for another two or three weeks. In the meantime, restaurants’ and other business’ services will remain limited.

Colfax also said the reproductive rate of the virus (R0) is climbing above 1.0 — which means that for each person who contracts COVID-19, they are, on average, infecting more than one additional person.

“The virus is increasing in our community,” Colfax said. “At this rate, it could potentially overwhelm our health care system and cause many deaths if we don’t get a handle on this right away.”

According to Lee Worden and other researchers at UCSF, the R number has been above one for some time. The R number for all six Bay Area counties is also above one — meaning, in short, that the problem is getting worse.

Several of the key public health indicators tracked by the Health Department to determine how well the city is doing, which are scored by color-coded indicators, are now in the red and yellow zone. The number of new cases per 100,000 people is currently at 6.1, well above the target of only 1.8. Anything above 6.0 is a red alert.

“The virus does not respect county lines,” he said. “If any county in the Bay Area is in such trouble, we are all in trouble.”

Colfax said the Health Department is continuing to evaluate the data and will have an update by the end of the week regarding the reopening of indoor museums, zoos, aquariums, outdoor swimming pools, real estate open houses, and personal services.

“We have time. There is a window now for course correction,” he said. “But if we don’t do it — and we don’t do it quickly — we could be looking in a surge of illness that goes well beyond what we are prepared to handle.”