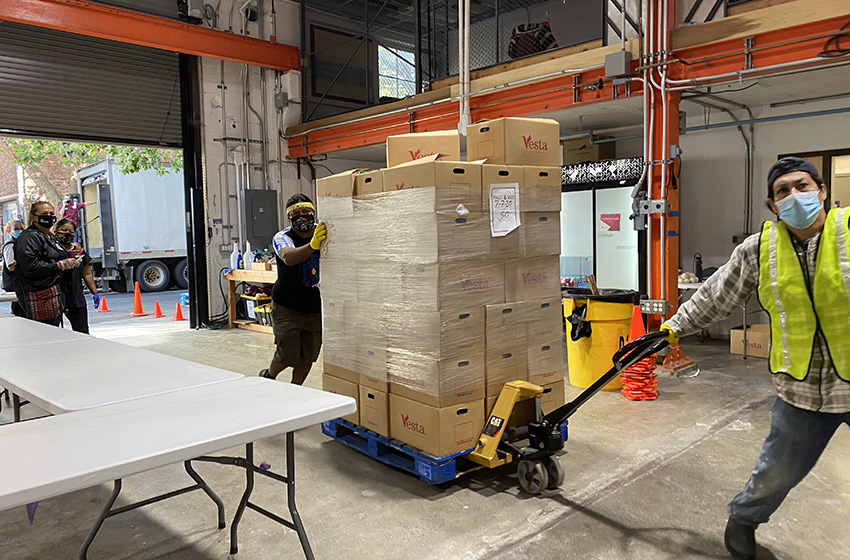 Workers at the Food Hub at 710 Alabama. Photo by Lydia Chávez

Positive Test Results.  It’s the biggest jump in months – 174 new cases have been added over the past few days, bringing the total to 4,316 as of July 7. The average number of cases reported per 100,000 residents is at 7.4, well into the Department of Public Health’s “high alert” red zone. The DPH goal is 1.8. The seven-day average of new positives is 66 (a change from earlier today). Remember these numbers are not “hard” figures. There are lag times, delays and changes in reporting. One of the downsides of decentralized testing and analyzing.

As concerning as this figure is, the City and local residents are making a concerted effort to increase the number of tests.

Also, despite much more testing since June 1,  the proportion of positive results reported daily remains close to 3 percent, the historic average.

Deaths. The good news is no new deaths. SF hasn’t had a new death since June 18.

Hospitalizations. Four new patients were taken into the intensive care and one was released. Hospitalizations over the past week rose 22 percent, also in the red zone. The goal is a 10 percent increase.

San Francisco hospitals continue to report 100 percent capacity. Yesterday I wrote, “The capacity for a potential surge remains at 100 percent.” A reader wrote in asking what that meant. One thing it means is poor writing. To clarify,  when DPH reports 100 percent capacity, it means they have room for a surge of patients.

Personal Protective Equipment. DPH reports only 89 percent of the personal protective equipment needed in hospitals is on hand (low alert, yellow). This number has been stagnant for weeks, which once again raises the specter of incompetence on a national level, as the Trump Maladministration refuses to take simple and reasonable steps to ramp up production to assure needed PPE for all health workers.

And a shout-out to the Latino Task Force. We can do more to beat back the virus than keep our distance from others and wear a mask.