The Burger War goes to The World of Noodles 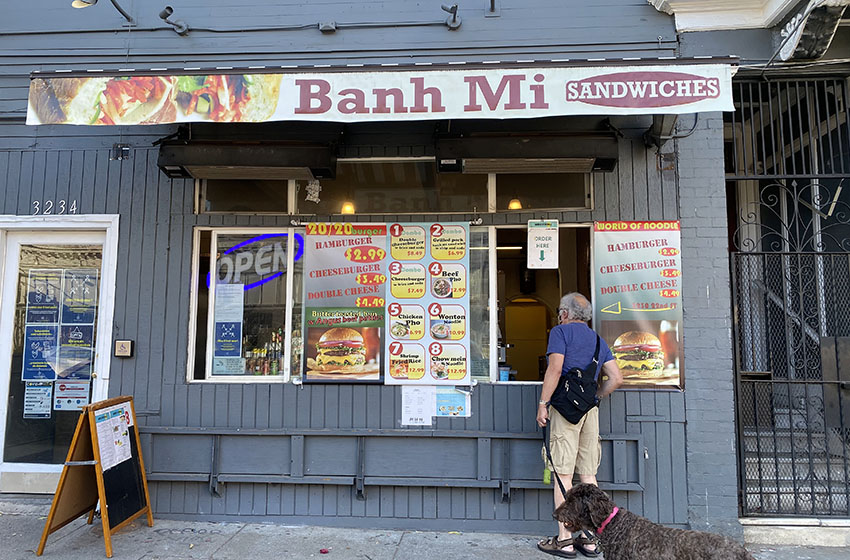 We were just at the dawn of our burger showdown when I passed by one of my absolute favorite noodle spots in Mission — World of Noodles on 22nd Street — and noticed something different.

A double cheeseburger for less than five dollars? At a noodle spot, no less? Who wouldn’t try that?

In the deepest reaches of my soul (hell, as an Asian-American whose father once flipped burgers for a living), I wanted this burger to be good — as good at World of Noodles’ chicken banh mi or its wonton noddles soup or its ramen.

One needn’t start a Zagat review for a burger less than one-third the price of a bougie “grass-fed” special at Son’s Addition and only fifty cents more than a Big Mac. I was looking for pure simple goodness here, a Holy Grail akin to the product of another banh mi shop in town, Saigon Sandwich, which sells its sandwiches for $4 and knocks it out of the park every single time.

Sadly, the double cheeseburger meal at World of Noodles was not the nugget of gold I had hoped for. The fries smelled like McDonald’s fries, but turned out to be soggy, even under-cooked. And the burger itself had potent notes of “middle school cafeteria,” with its semi-hardened American cheese, overwhelming raw onions, and beef with no discernible flavor other than the walls of a microwave. (I’m not sure how the establishment cooks the patties, but they tasted microwaved.)

“It has one of those patties that you don’t want to look at too closely,” pointed out my housemate, E, a fellow burger expert, noting the odd crater-like “steam circles” that only form on burgers one may find at a water park, the zoo, and — yes — a cafeteria.

My recommendation for patrons of World of Noodles: Stick with the noodles.

Julian, I understand your disappointment with the burger at World of Noodles.

You are a young, aspiring burgerphile who strives to turn deconstructing a sandwich into a worthwhile artistic endeavor.

So, you must remember: There’s more to a burger than meat, bread, and price.

I ordered a double cheeseburger and fries for a grand total of $7.49.

The fries, as you say, appeared, smelled and tasted like McDonald’s fries. Though greasier. They definitely seemed like russet potatoes, machine cut to the same size and shape, with just the “right amount” of salt.  Forty years ago, I used to eat McDonald’s fries while working at my desk. One of the few pleasures the Financial District had to offer.

The burger (double cheese) came wrapped in foil. It consisted of two smallish patties pushed together in a nondescript bun, which may have been toasted, covered on two sides with what I assumed to be melted cheese.

First, the beef. Finally, I got a medium burger. I had ordered medium at our previous stops, but was inevitably served well-done burgers. This time I could actually see some pink.

The patties were advertised as “Angus,” which used to be code for a better cut of meat. These seemed to be sadly common, like they had recently come from the freezer at Costco. Which is not meant as a put-down. My mother-in-law, an enthusiastic and discriminating carnivore, always put in a good word for Costco meats.

You say the cheese was American. Do you have documentation for that?  To me, it tasted like Cheez Whiz.  And, yes, there was a time when I craved burgers with Cheez Whiz.

But, like the food court behind bleachers, before the Giants won the World Series in 2010, grease was this burger’s highest calling: meat, cheese, bun, fries, hands, pants, cellphone, dripping in grease.

I did not have to worry that my wife would ask for a bite.

Overall, I give the World of Noodles an A in imagination and a C- in microwaving a memorable gastronomic experience. With a side of pros and cons.

On the pro side, I felt I was eating a time machine.

On the con side, two hours later, it felt more like a time bomb.

Next up: Double Decker.