Hundreds march through Mission in latest action against police brutality 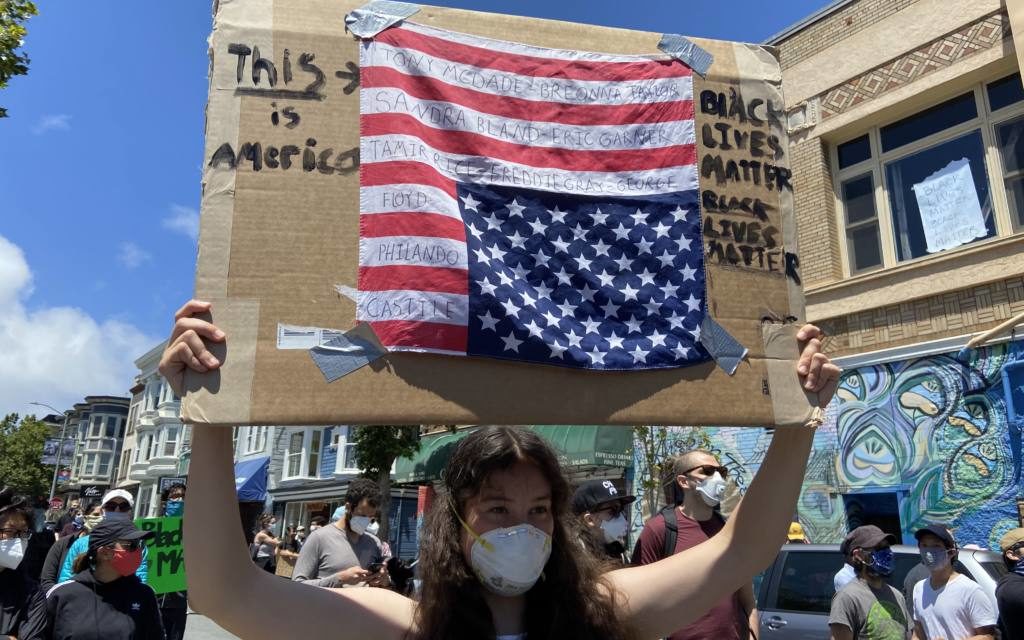 Hundreds of protesters in San Francisco came out to the Mission today in support of a series of coordinated nationwide rallies, with thousands more also blocking the Golden Gate Bridge.

The action called for the end of what organizers said are fascist strategies upheld by a series of American administrations; specifically, protesters condemned the murders of black people across the country and President Trump’s proposed use of military force to quell protests.

“It’s long overdue, for me,” said Channa Waala, 23, who drove up from San Jose to participate. “Enough is enough.”

He said that although recent actions by this administration highlights “a police state,” the United States has a history of fascism and militarization.

The San Francisco rally began in front of the 24th Street Mission BART station at around noon today. As the crowd swelled to about 100 people and spilled off the sidewalks, police and traffic officials blocked off entrances to Mission Street and Capp Street at 25th Street. 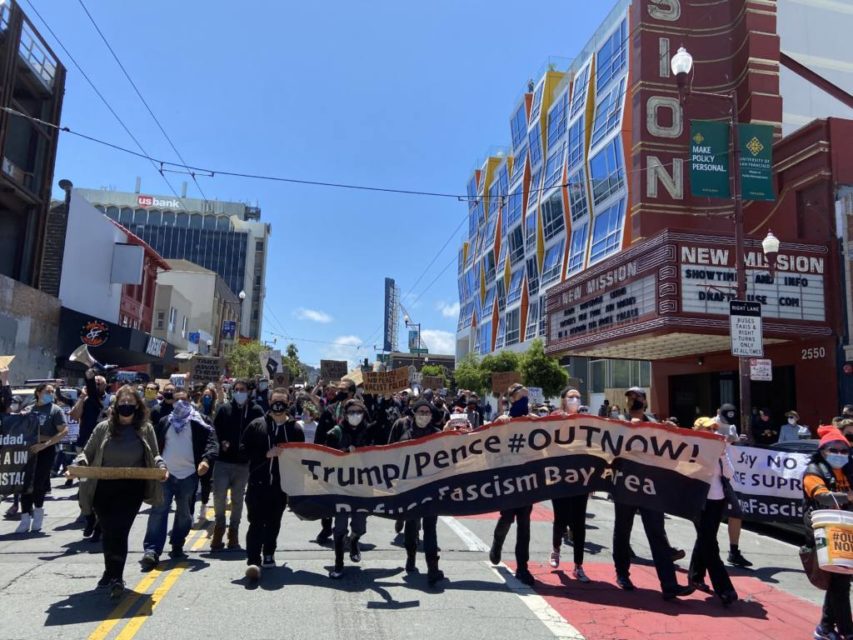 The protesters, from the Mission, Oakland, and the South Bay,  gathered at the BART station and marched toward the Mission Police Station at about 12:45 p.m, brandishing signs proclaiming  “Black Lives Matter,” “Trump and Pence Out Now,” and “George Floyd.”

Richard Gabri, a Diamond Heights resident, literally had his 7-year-old son Gabriel in tow as he wheeled him in a wagon during the march.

Gabri, who is white, said that he felt it was important to demand better treatment of blacks. His wife, Denise Bedrosian, is black, and their two biracial kids protested today.

“As a biracial couple, we feel like we want our voices to be heard in this community because there’s so few black people that are left,” Gabri said. 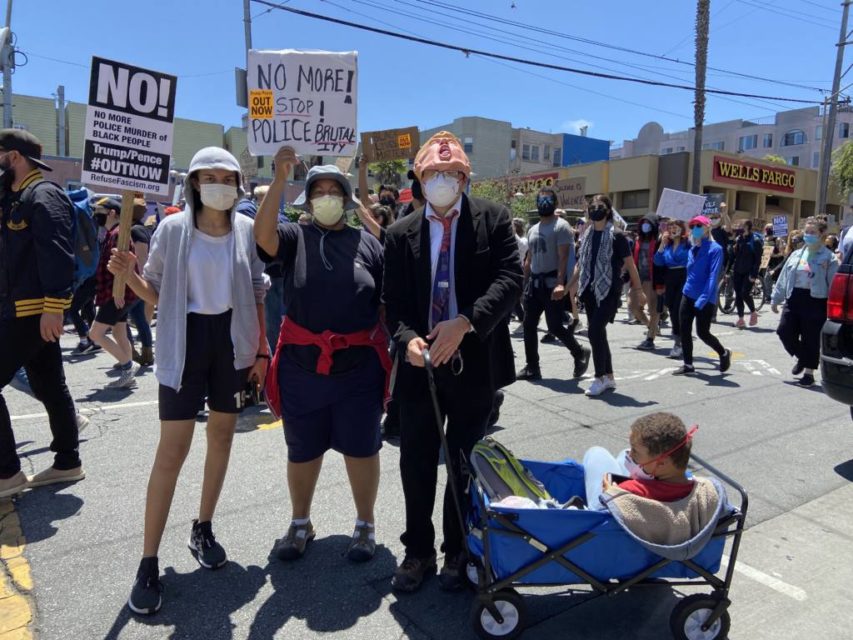 He said he worries that his kids could face police brutality in the future if police departments fail to change.

“The city needs to look at itself. Although there’s thousands of liberal voices, there’s a lot of lip service,” Gabri said. “They’re not taking any real steps to change.”

Mayor London Breed and Supervisor Shamann Walton announced Thursday that they would take a portion of the police department’s budget and redirect it to the city’s African American community. No dollar amount or further details were forthcoming.

Walton told Mission Local that he’d like to see at least $25 million “if we are really trying to change some of the systemic issues oppressing black people here in San Francisco.”

As sister protests also organized by the group Refuse Fascism unfolded in Atlanta, Los Angeles, Houston, and Washington D.C. , participants at the San Francisco rally made sure to underscore local community issues.

Several times activist leaders initiated chants for Sean Monterrosa, the 22-year-old Bernal Heights resident who was shot dead earlier this week by Vallejo police as he knelt with his hands up.

Leaders of the protest asked people to kneel with arms to the sky in honor of #justiceforseanmonterrosa and the rest of black and brown San Franciscans who have died at the hands of police. pic.twitter.com/mxFK1kKJvp

Once the march reached the Mission Police Station, the crowd of protesters knelt and raised their arms in his honor.

Yesterday, a crowd of more than 100 people held a rally in his honor at 24th Mission BART station as well.

“Stop the murders!” A tearful protester yelled in Spanish to the crowd by megaphone. “Imagine the pain black and Latina mothers face. Stop it. Enough already!”

Various protesters shook their signs at the police officers posted in front of the police station and the crowd led chants that said “F*** the police.” No altercations occurred.

Xochitil Johnson, one of the main leaders of the action, took the megaphone to commend the diversity of the crowd. She thanked Asian, Latino, and white protesters for demonstrating their solidarity.

The march made its way back to the 24th Street BART station which was still blocked off at 1:45 p.m. People marched while walking their bikes and dogs, and a few protesters held up their skateboards decorated with the letters “BLM.” They received cheers and cowbell rings from Mission residents who looked on from their windows and balconies.

When the march reached the station, Johnson invited any person to come to the front and share why they joined the rally.

Yanela Mendez, a 27-year-old nurse who lives in San Francisco, was one of them.

“As a nurse you don’t get the choice of who you get to treat,” Yanez said. “Why are we letting cops choose who they are going to arrest?”

Some people stepped up and spoke about the black transgender community and systemic racism. Others voiced ideas of political revolution; a few said that disinformation and police brutality were examples of fascism and that these needed to be stopped.

At one point, Johnson led the crowd to a kneel and a one-minute countdown to pay respect to George Floyd, the black man who died on May 25 after a Minneapolis police officer knelt on his neck for more than eight minutes.

Hundreds of protestors are marching down to the Mission Police Station chanting “Say His Name George Floyd!” pic.twitter.com/5sl9ug1jnk