Reform/defund/abolish the San Francisco Police Department: What we can do, what we can’t — and what we won’t 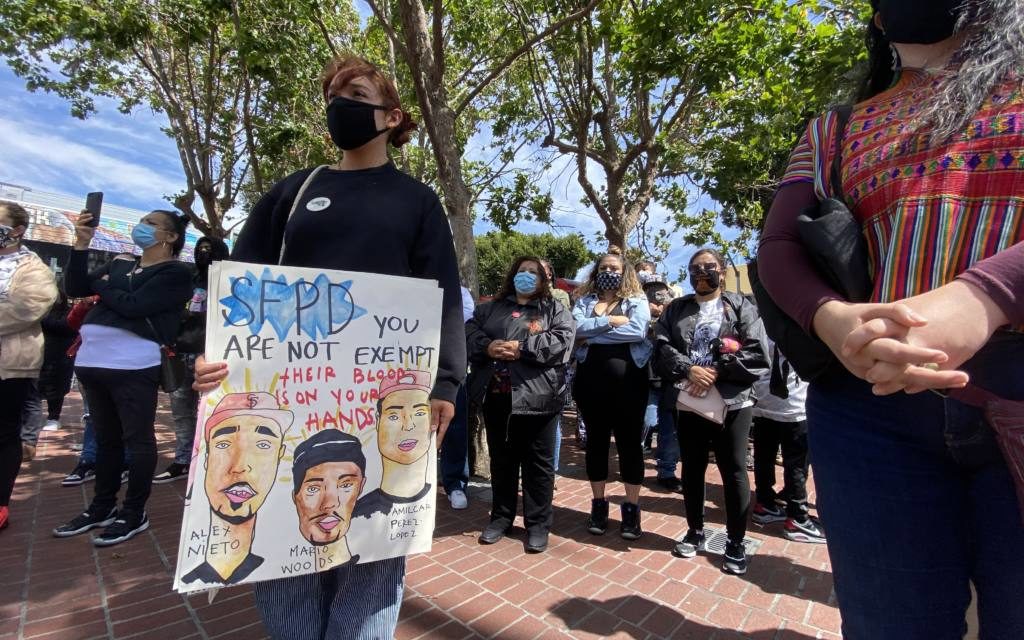 On May 24, the notion of diverting millions of dollars from the police department to the Black community would’ve been seen as earth-shattering and radical.

If it seems like a good idea now, it was certainly a good idea then. But no mainstream politician was suggesting it then. Well, they are now: On May 25, Minneapolis police killed George Floyd and the earth shattered in a different manner altogether.

And, now, anything short of a truly massive sum reallocated from the cops to the Black community will come off not as earth-shattering and radical but parsimonious and reactionary — and hardly satiate the throngs in the street  (and swamping the phone lines for Police Commission meetings) calling for the department to be “defunded.”

One day after Mayor Eric Garcetti of Los Angeles said he’d cut the police department budget and divert funds to Black communities, San Francisco Mayor London Breed reached out to Supervisor Shamann Walton to do that here, too. Breed has offered no dollar totals whatsoever, but Walton last week told Mission Local he hoped for “at least $25 million.”

Now, that’s a lot of money, especially if placed in two piles. But, in the context of the San Francisco Police Department’s hefty budget — and the nation’s political mood — $25 million comes off as a gesture.

Nobody’s in the mood for gestures right now. Last week, after doing the math, Walton noted that the 10 to 15 percent citywide cuts the mayor has called for could amount to more than $100 million lopped off the nearly $700 million police budget. “So, for us to redirect resources to the Black community, we are looking at OVER $100 million of resources,” he wrote.

When your humble narrator asked Walton if $25 million is no longer a sufficient number, he replied “no number is sufficient.”

And the earth keeps shattering: When Breed in April tapped hard-nosed prosecutor Nancy Tung and former Deputy City Attorney Geoffrey Gordon-Creed for the Police Commission, they seemed like conventional and potentially acceptable picks. But by last week they were radioactive — Gordon-Creed dropped out when it was clear he no longer had the votes and Tung was shot down by a jarring 10-1 Board of Supervisors vote.

One would think some introspection and strategic reassessment was due after 10 of 11 supervisors rejected the mayor’s nominee. Instead, Breed told KQED that the Board’s spurning of any candidate she deigned to nominate was a personal insult to her lived experience as a Black San Franciscan.

We’ll see who she nominates next.

Finally, on Thursday, Breed announced a bevy of police reforms that seemed groundbreaking — which they were back when the SFPD, in fact, embarked on a number of them long ago.

“What we have is a statement — more promises — completely devoid of context that we’ve already been through this,” former ACLU attorney John Crew told Mission Local’s Julian Mark.  “And that’s extremely discouraging.”

Hey Muni, lose our number next time you need officers for fare evasion enforcement or removing problem passengers from your buses and trains. Shouldn’t be a @SFPD officer’s job anyway. @SFPDChief should stop using us for this. https://t.co/ykOpzo4O4Y

Take it easy, Champ. Why don’t you stop talking for a while?”

Maybe sit the next couple plays out, you know what I mean?

That’s an exchange from the film Anchorman. But, for all the world, it could’ve been used as an intervention with Police Officers Association President Tony Montoya last week as he reacted with online indignation regarding requests to “defund” the San Francisco Police Department.

“Policing is not the tool for all of our problems, yet our elected leaders send us in to solve every social problem the world throws at us. …” Montoya wrote in a POA-wide email.

But that’s … kind of the idea, right? You don’t need to have a gun and a badge and be an armed representative of sovereign state power to do jobs we should be hiring social workers for. Nurses at San Francisco General often encounter belligerent people, too — and rarely, if ever, shoot them.

“The more the POA keeps talking,” says Walton, “the more beneficial it is for us.”

But the union wasn’t ready to take it easy. When Muni announced it would no longer transport police en masse to anti-police brutality rallies, the POA petulantly tweeted at the transit agency “lose our number” regarding fare enforcement or handling misbehaving passengers. “Shouldn’t be a @SFPD officer’s job anyway. @SFPDChief should stop using us for this.”

Again, that’s … kind of the idea, right? Muni reports that it pays the SFPD some $6 million a year for these tasks. If the cops don’t want the gig, someone else — someone more appropriate — could do it and get all or part of this money. That’s one definition of what “defunding the police” means.

“Defunding” is a malleable term, and when George Lakoff tells you your messaging stinks, it probably does. But, clearly, the pressure is being felt: On the heels of last week’s performance, the San Francisco Police Officers Association and other police unions announced backing for a reform plan to weed out racist officers.

We’ll see where that goes. But, before that, Tony Montoya and the POA did a bang-up job of explaining why defunding the police could be a mainstream and desirable idea.

But what about going further than defunding?

A veto-proof majority of Minneapolis legislators this month vowed to disband that city’s police force — and The Mill City’s elfin mayor was booed out of a protest and made to skulk home when he declined to commit to abolishing the police.

No elected official is yet suggesting we take these steps in San Francisco. But, your humble narrator has learned, they are asking structural questions about it, behind closed doors.

So, as you’d imagine, a wholesale transformation of the police department would very likely require a vote, if not multiple votes. As would “disbanding” or “abolishing” the department outright, a la Minneapolis.

In this city, the mandated existence of a police department is right there in the City Charter. And the Charter — for now — additionally mandates the city employ 1,971 sworn police officers.

So that’s what we can’t do in short order.

But Breed’s Thursday announcement indicated that we can do plenty. The catch is, will we? After all, we were already trying to do a lot of this stuff — and failing. 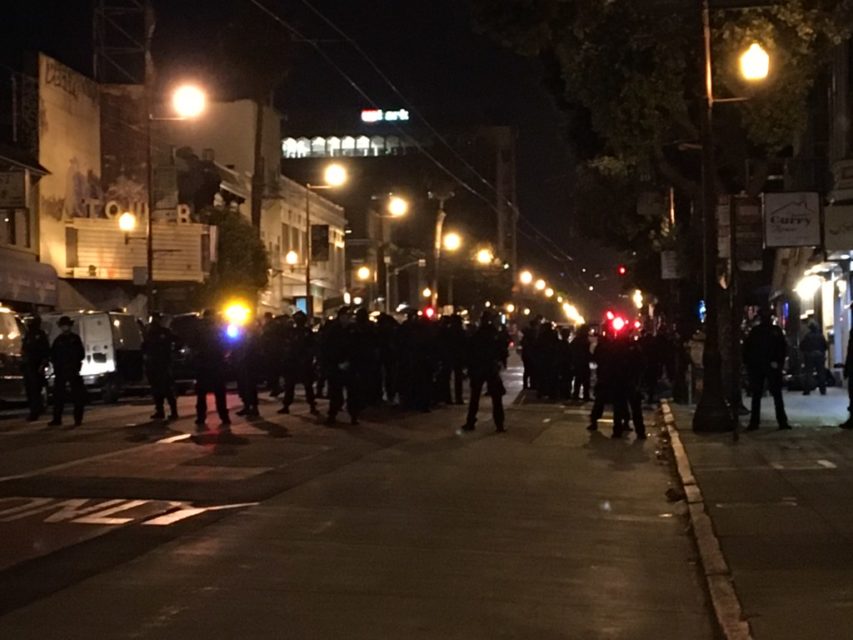 Montoya’s reaction to Breed’s Thursday rollout of police reforms was downright civil. And that was heartening — until you considered that this may be because she was asking the cops to do things they were already doing.

It’s great that the mayor has moved to ban militarized weapons like tear gas, tanks, and bayonets more befitting a World War I battlefield than a major American city. But we had already done that. Thank God.

But, to be fair, there’s quite a lot the department has already done — and it deserves some credit.

But police use of force still falls, heavily and disproportionately, on people of color. And the same goes for police shootings. Addressing violence and shootings was good and necessary — but it wasn’t enough. Bias is the next frontier for this department. Everybody knows this. Redirecting money and responsibilities away from police won’t be enough if officers still use force disproportionately and with little recourse.

What we have to do isn’t a mystery. It’s how.

In the meantime, SFPD brass likely figures it can ride out the latest round of protests, and protesters from put-upon communities likely figure it’s folly to hope the SFPD can ever really change.

These are mutually reinforcing positions. The result is stagnation and  perpetuation of the status quo.

It will take dedicated leadership to break the status quo. Whether we have that leadership in any vestige of city government remains an open question.

Real change requires more than just a few high-profile firings or splashy announcements, but buy-in and concerted effort and accountability for the results from myriad parties — and the enactment of clear and workable systems and policies. And, in the end, you the voter may be called upon to ratify much of it.

It’s a lot to ask. But, then, nothing less will do.