Deal is purportedly rejected by Mayor Breed — and, so are her nominees for police oversight body

By a 10-1 vote, the Board of Supervisors on Tuesday afternoon rejected Mayor London Breed’s nominee for the Police Commission, Nancy Tung. Fellow nominee Geoffrey Gordon-Creed withdrew his candidacy today when it became apparent he, too, did not have six votes.

This comes a week after a fraught, seven-hour meeting on June 1, when the Rules Committee recommended the full board reject both nominees.

Tung, who last year ran for District Attorney as the field’s “law and order” candidate, was facing a difficult road to confirmation even before Minneapolis police on May 25 killed George Floyd.

Following that tragedy, and weeks of worldwide protests, the notion of placing conventional candidates on the Police Commission — who have not spent their careers working with minority communities and fighting for police reform — very rapidly became untenable.

One by one, the supes politely praised Tung’s gumption and accomplishments — before rejecting her in words that often pushed into severe condemnation.

“This is not a time for people who are not in favor of systemic change,” said Supervisor Shamann Walton. “It’s not about the race or ethnicity of the candidate but the person who is needed at this time. I think it would be disrespectful to our community, the black community, if you do support this appointment. That comes from my heart as a black man.”

Board President Norman Yee said that the Chinese community “should not settle for the nomination based upon the [candidate’s] race alone” before rejecting the Chinese American Tung.

Peskin expressed annoyance that the board had to vote on this appointment at all.

“All of this has been obvious for many days now,” he said. “Why has this candidate not withdrawn? That would be the proper thing to do.”

Only Supervisor Catherine Stefani voted in favor of the mayor’s appointee.

Tung in the last election cycle took a donation from the reactionary Police Officers Association and was the only DA hopeful who unequivocally said she’d welcome the POA’s endorsement. She supported Proposition H — which the POA put on the ballot in hopes of eluding the Police Commission and writing its own Taser policy — and opposed moves to shutter Juvenile Hall. 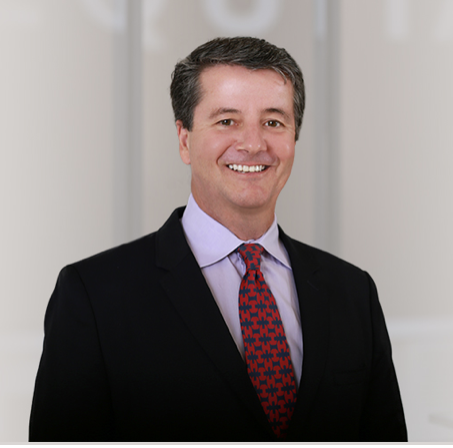 But, during the June 1 hearing, Gordon-Creed did not seem fully prepared, showing unfamiliarity with the landmark AB 392, which in 2019 lowered the nigh-impossible standard required to charge police for unnecessary force. Gordon-Creed also professed to not have sufficient knowledge of recent lethal San Francisco police encounters to answer questions about whether officers should’ve been charged or even lose their jobs.

Still, some members of the board viewed him as potentially “as good a mayoral appointee as we’re going to get.” But the loose coalition of left-leaning supes potentially in favor of voting for Gordon-Creed appears to have ruptured shortly before today’s meeting.

Mission Local is told by multiple sources that Mayor London Breed was not receptive to an offer emanating from the Board of Supervisors to have Tung bow out in exchange for preserving Gordon-Creed’s tenuous path to six votes.

This purported deal didn’t go anywhere — and news of its existence was greeted with surprise and disapproval by multiple members of the Board’s progressive wing. Regardless, Tung was voted down today with gusto and Gordon-Creed submitted his letter of withdrawal, bluntly stating “It does not appear I have sufficient support from the Board of Supervisors …” 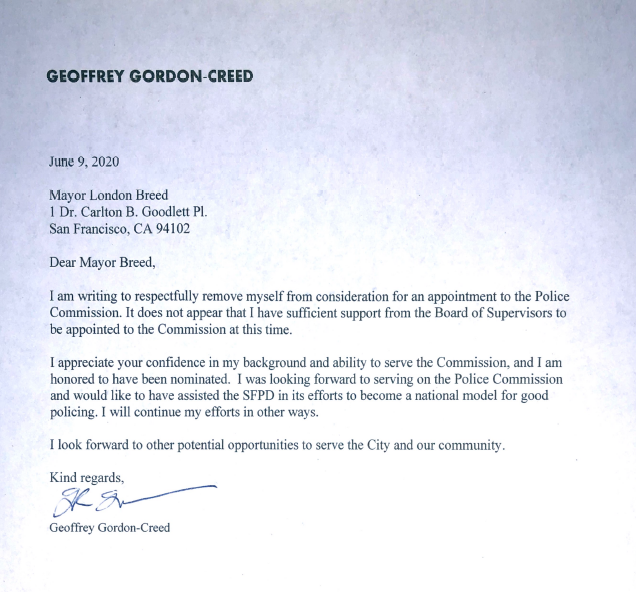 Tung days ago told Mission Local she would stick out this process to the bitter end, even though the votes weren’t there. We’re told she was, in fact, in queue for the virtual meeting early today, well before her agenda item came up.

Following today’s vote, she released a lengthy statement on the outcome and process.

“Let’s be clear, this is about the Supervisors playing politics with important City commissions,” said mayoral spokesman Andy Lynch after 10 supervisors voted against Breed’s nominee.

“The Mayor has spent her career leading on the issue of police reform and she just announced that she will be leading the effort to redirect funding from the San Francisco Police Department to support the Black community. This is the type of action this moment calls for, and the Board needs to stop holding critical commission seats vacant when we have real, important work to do.”

But a number of supervisors last week told Mission Local that these Police Commission candidates, in addition to several other recent mayoral appointees, were not vetted with the board at all. Putting forward candidates who do not have the requisite six votes doesn’t make much sense to our legislators — especially when, as demonstrated today, they do not pay much heed to the pressures of identity politics.

Politically, especially in the George Floyd era, the supervisors may pay no political price at all — or even be rewarded — by voting down a moderate candidate for the Police Commission, regardless of her ethnicity.

Today, a process that was grueling and unpleasant for everyone involved, not least the candidates Tung and Gordon-Creed, came to a close.