Some 10,000 protesters march through San Francisco in George Floyd demonstration 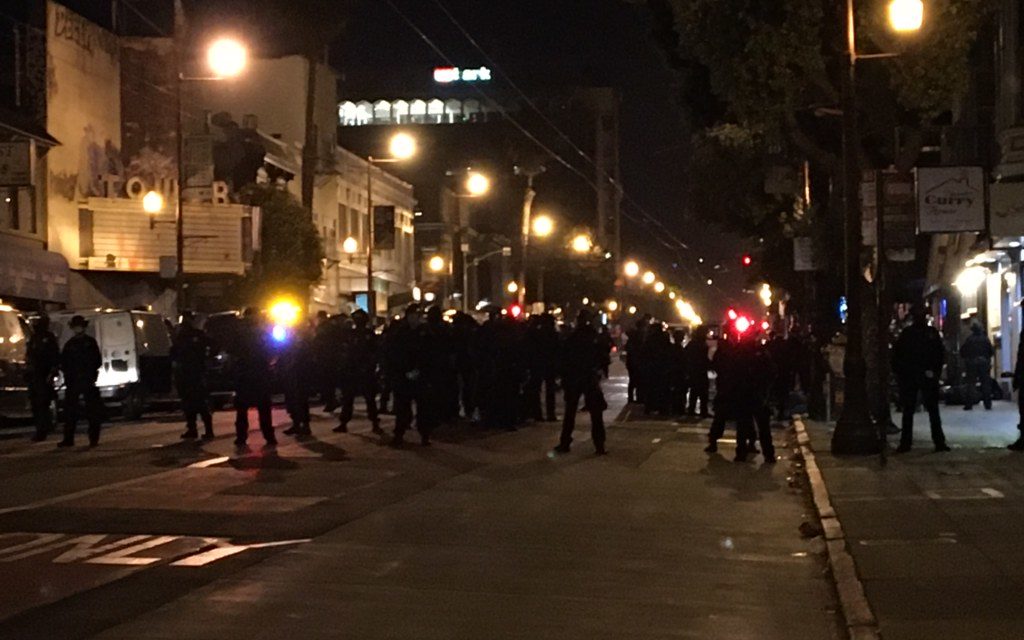 11:46 p.m. Julian Mark is out. It appears that police arrested 20 or so protesters — including, it seems, a 14-year-old boy — and they are on their way to be processed at parts unknown (Tuesday night’s arrestees were processed at Pier 50). In the meantime, two ambulances have arrived at the scene. One person is being wheeled around in a chair, according to Laura Wenus from SF Public Press, but it is unclear what happened to that protester. Another person is sitting in the door of the second ambulance, but again, it is unclear if they are hurt or how badly. Otherwise, the scene has turned quiet. 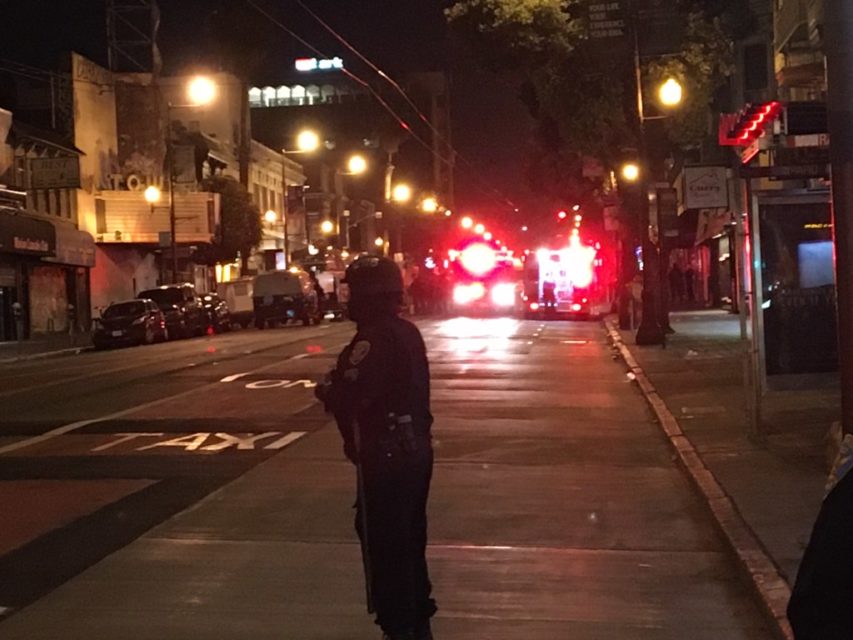 11:35 p.m. Julian Mark was taking a video of the scene on Mission Street near 21st when officers surrounded a group of protesters. One officer, he said, pushed him in with the group — even after he produced his SFPD-issued press credential and tried to get out of the way. All of the other protesters have been loaded into a paddy wagon. Unclear why Julian remains surrounded and detained.

Lying on the ground here with a dozen protesters. Completely surrounded on mission st pic.twitter.com/Lv5zZuiFsW

9:28 p.m. Julian Mark at the Hall of Justice reports that the crowd has thinned to some 200 and is moving downtown; Laura Wenus with SF Public Press says the crowd is diminishing there as well — and at the Mission Station, the numbers are below 50.

There was an interesting exchange at the Mission Station between Maurice Hicks Jr., who lives in the Bayview, and a lieutenant at the station. Hicks had been vocal at the barricade and the officer walked over and began to engage with him. They talked about respect, and Hicks said he wanted an apology from another officer who had somehow disrespected him.

He never got that apology, but smart move by the lieutenant to talk to Hicks. After the exchange, Hicks took off and so did others. A good example of de-escalation. I could not catch the officer’s name, but Hicks said it was Lt. Do.

All in all — at least for right now — it appears to have been a successful day of peaceful protesting. 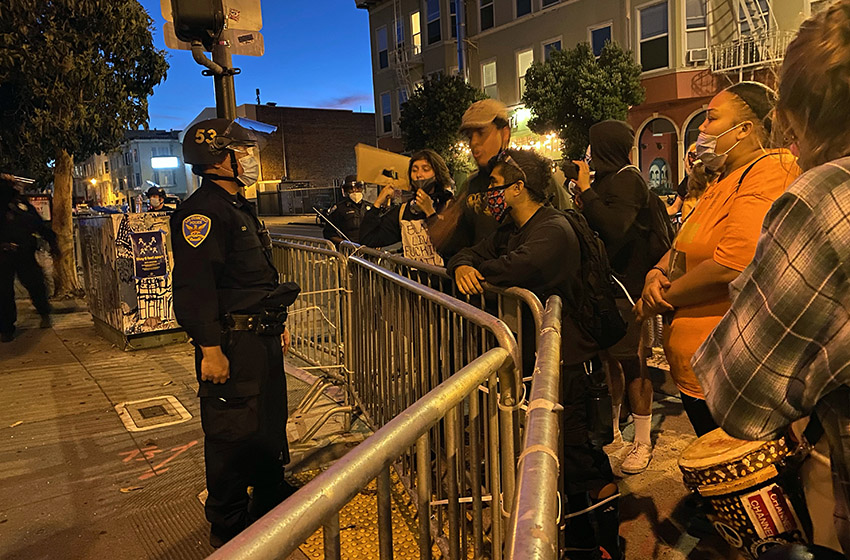 The lieutenant talking to Maurice Hicks, Jr., the man without a mask. Photo by Lydia Chávez. 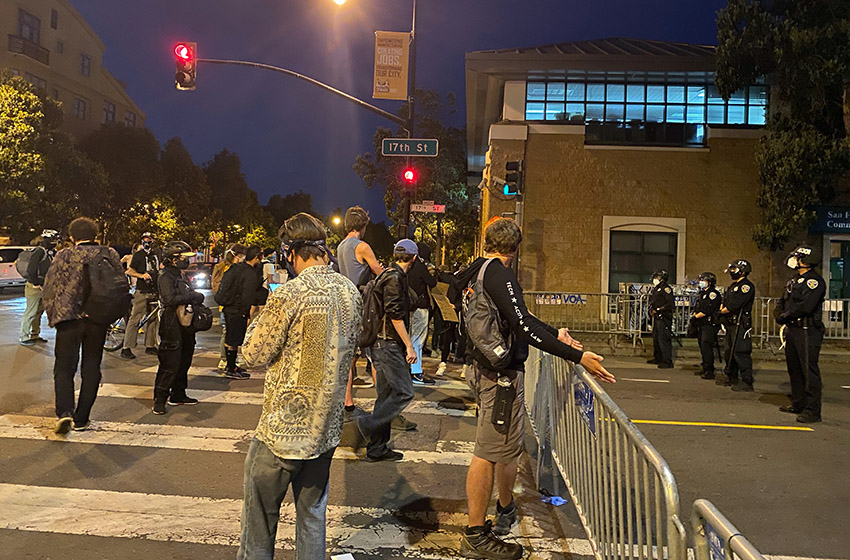 Outside Mission Station around 9 p.m. Photo by Lydia Chávez.

8:25 p.m. Some 200 or so protesters stayed behind at Mission Station and something of a standoff has ensued, with police on one side of the barricades at 17th Street at Valencia and protesters on the other side.

“All you need is one person to come out here and say something that makes sense,” said one of the protesters. It’s well past curfew. Heading back out to see if arrests begin. Julian Mark says that nothing much is happening at the Hall of Justice. 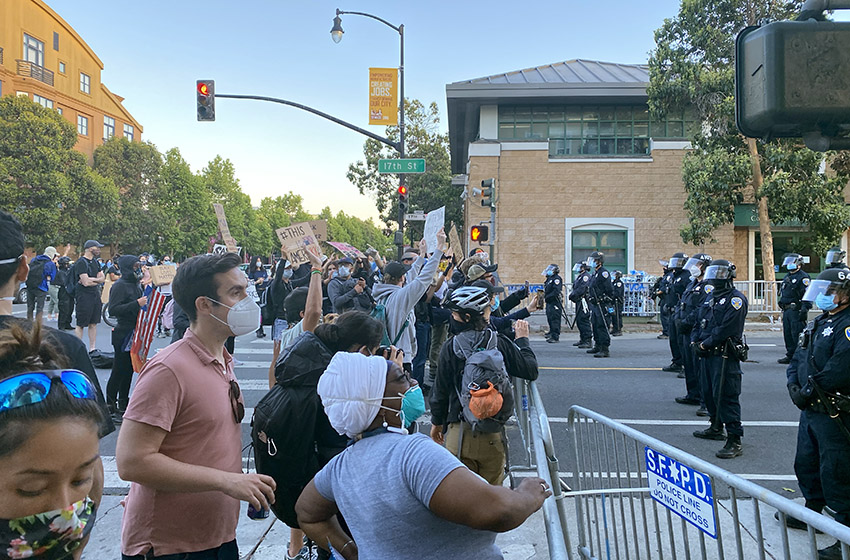 If you read us regularly and haven’t yet,  please support us. We’re out here so you can be inside.

Back in the Mission, several hundred protesters marched north on Valencia.

Some 1000 or more headed from mission station to civic center. @SFPublicPress pic.twitter.com/mRHaGxKFWY 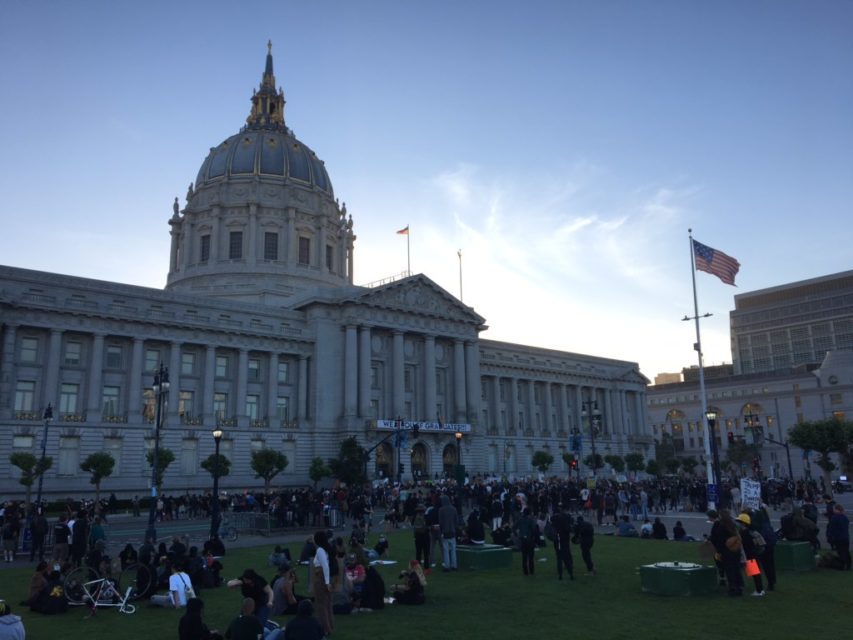 The Mission protesters on Valencia were headed toward City Hall where Laura Wenus from SF Public Press, said some 200 protesters had gathered.

Protesters set a flag on fire at the Hall of Justice. They seem ready to get gassed, wrote Julian Mark. “I’m not seeing many officers,” he said.

“If they use tear gas, hold your breath — don’t rub your eyes,” someone advises; apparently solution is being handed around. Protesters are telling white people to get out front.

7:19 pm. A big contingent is now at the Hall of Justice at 850 Bryant St. Julian Mark reports, but many in the march headed down 7th Street, presumably to City Hall. At the Hall of Justice, a woman with a bullhorn is shouting, “In case they get violent, do not panic.  Stay together.”

Now a woman is reading instructions about what to do if police start using tear gas. 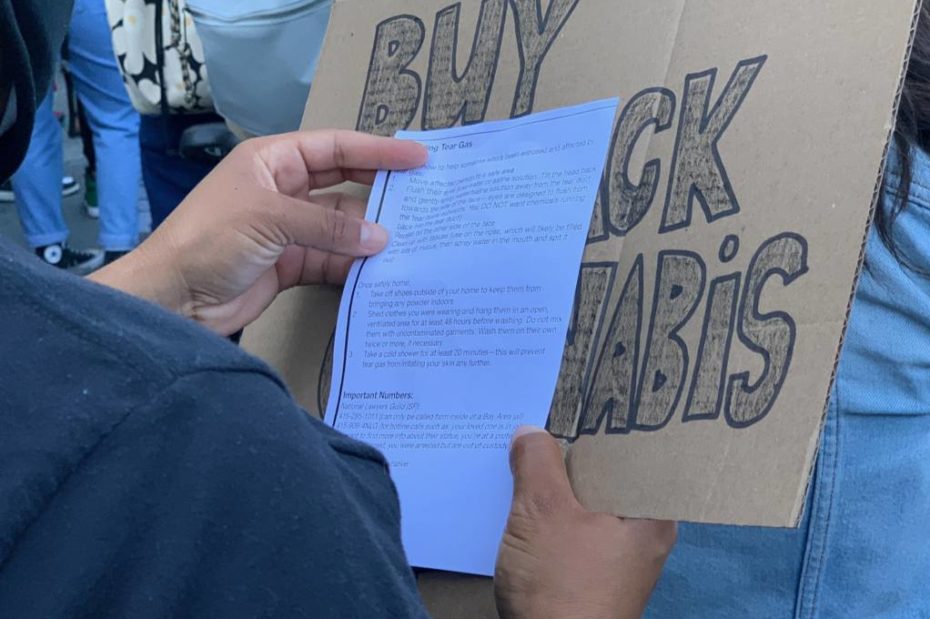 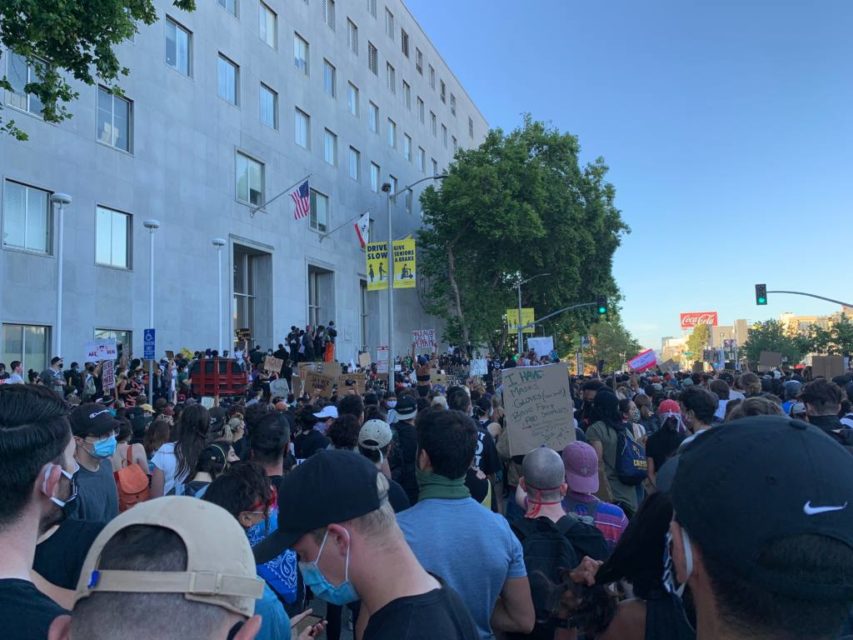 7 p.m.  Julian Mark reports that they are now on Bryant Street headed to 850 Bryant. Thousands, he said, have stayed with the march.

6:40 p.m: From Julian Mark, The procession is never-ending as protesters chant: George Floyd.  Watching from Albion Street near 16th, marchers walked by for at least a full 45 minutes.

Here’s a video from 16th and Mission Streets. I’ve spoken to quite a few marchers here on 16th heading east. No one knows where we’re going! “The police station, maybe?” was the most common reply.

6:00 p.m.: The march appears to be heading eastbound down 16th Street. The word from protesters is the march is heading toward the San Francisco Hall of Justice at 850 Bryant. There are currently thousands on 16th Street chanting, “Say his name — George Floyd.” But the protests, of course, are not just about George Floyd. Want to know why people are angry in San Francisco? Read more here.

5:50 p.m.: We’re seeing a very minimal police presence right now — just a few motorcycle cops and a California Highway Patrol helicopter overhead — as some protesters move westbound up 18th Street into Noe Valley. The march appears to be heading northbound on Castro and back down into the Mission via 16th Street. “Black lives matter!” the protesters chant. 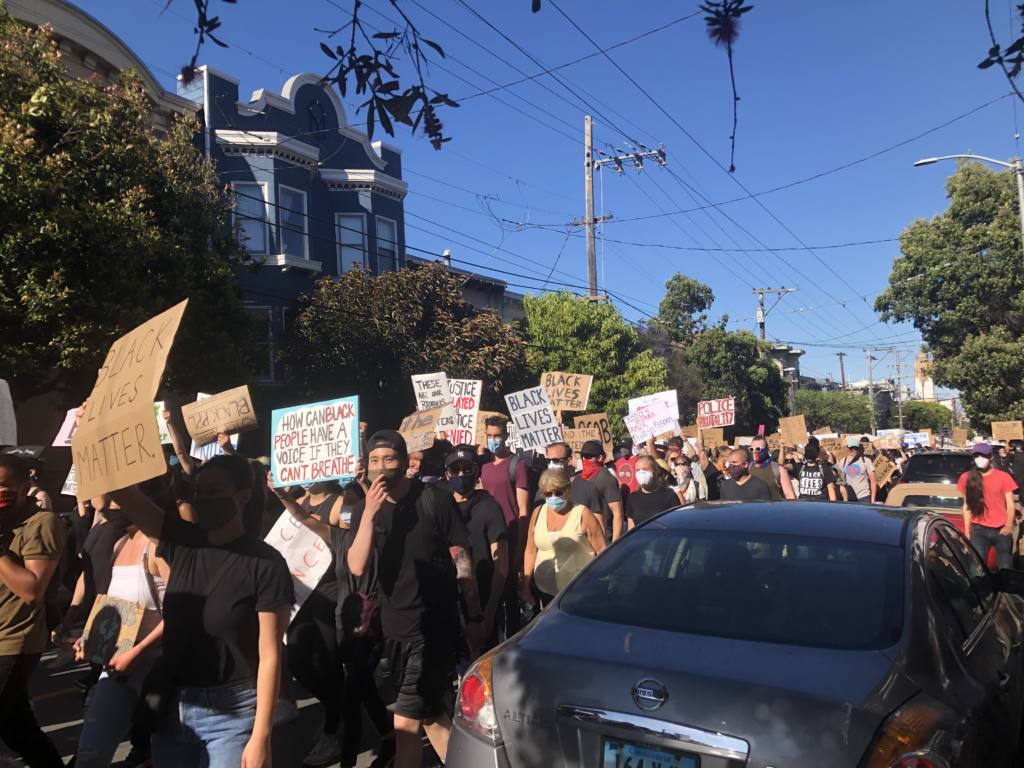 5:27 p.m.: Mission Local’s Michael Toren reports that people are chanting “Fuck the curfew” — just as the city’s “emergency alert” popped up on people’s cell phones reminding them of an 8 p.m. curfew. “If there is tear gas — do not freak out!” a woman says through a bullhorn. Toren says the crowd has mobilized and is moving “very very very slowly” up 18th Street

Most people that Mission Local has spoken to, however, want the protests to remain peaceful. Ruth Bond of West Portal brought her two teenage children. “What I’m hoping for is what’s happening,” she said. “A very peaceful and diverse group of people coming together.”

5:20 p.m.: Dolores Park and the surrounding streets are completely swarmed with people supporting calls for better, fairer, and less brutal policing in America. Mission Local’s Natalia Gurevich reports that the crowd has mobilized. 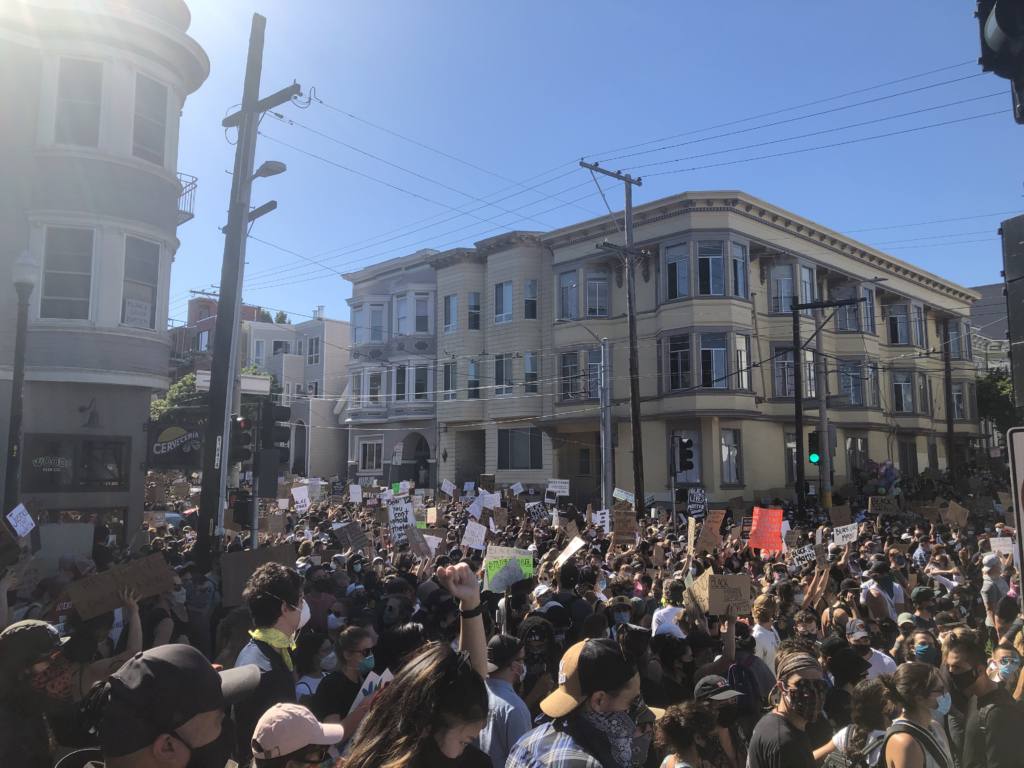 4:47 p.m.: Eighteenth street is completely flooded with people. Some Mission Local reporters estimate some 10,000 people have turned out. It certainly looks that way.

Dr. Seema Gandhi, a UCSF physician, is attending with her 13-year-old son, who is climbing a tree to get a better view of the hoards of people. “Just here for support,” Gandhi said. “Lots of people didn’t want to come because of what happened with other protests — but you can’t live in fear.” 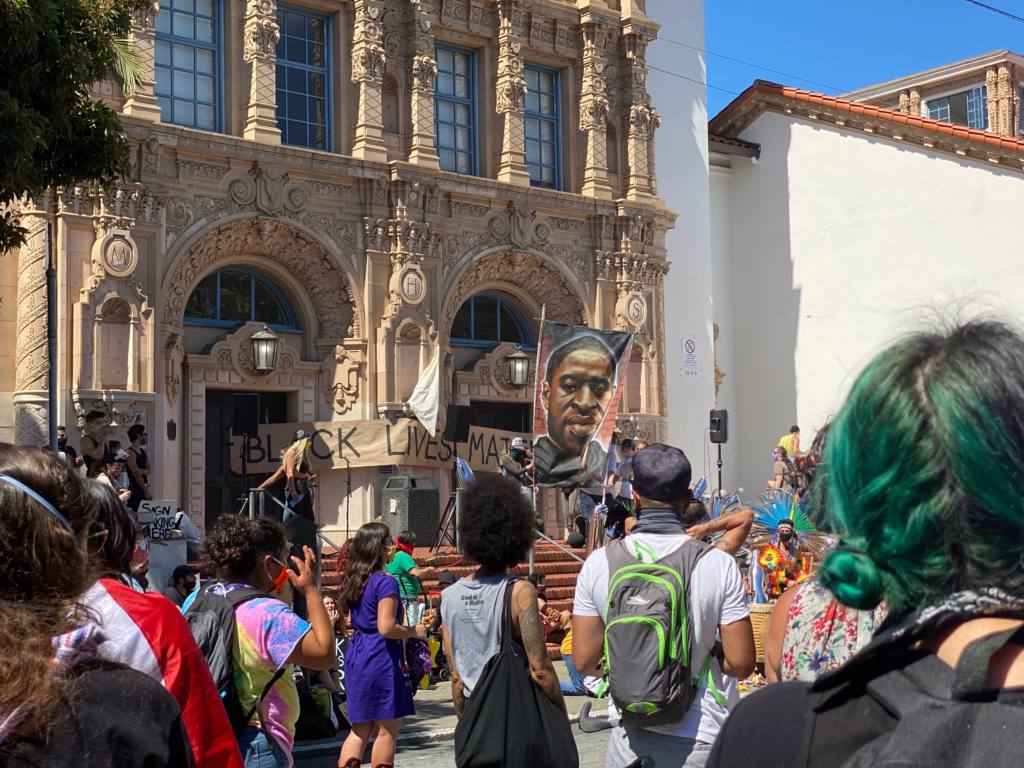 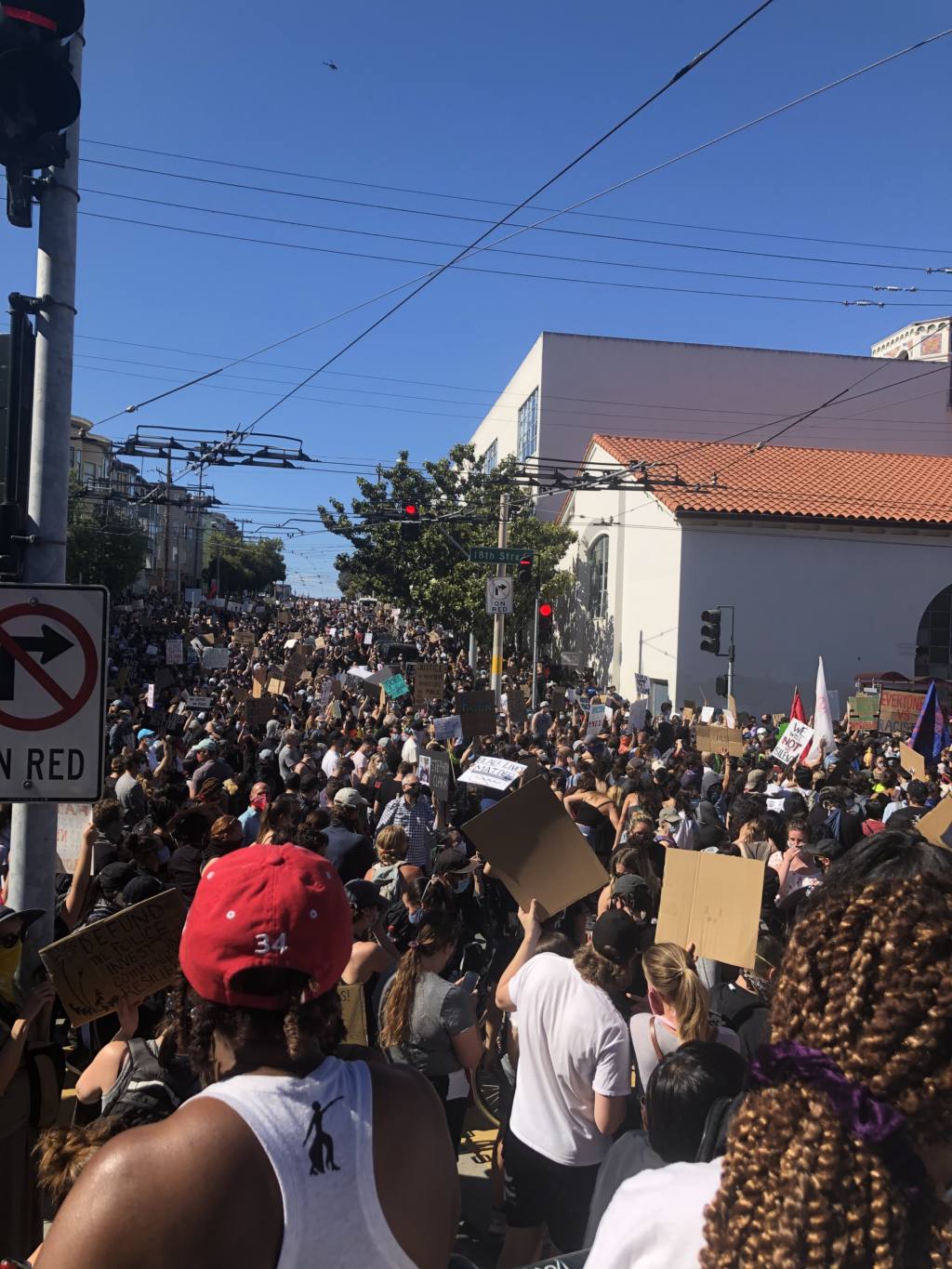 4:38 p.m.: The crowd continues to build. Mission Local reporters describe thousands waiting to march. Attendee Haley Wolf says she traveled from Redwood City to offer support wherever she can — “to use my privilege in any way that I can, to put my body in front of anyone who needs it,” says Wolf (who identifies as white).

3:52 p.m.: Mission Local’s Michael Toren describes a “street party atmosphere,” with organizers handing out bottled water and supplies. Demonstrator Hana Bixler says she brought water, Gatorade, fruit snacks, and granola bars, as well as face masks and lists of hotlines to call if a protester is arrested. “They went fast,” she said, noting that all 50 are now gone.

Despite a lack of distancing, Toren reports, everyone is wearing face coverings. It appears some are going to join while riding in their cars. Police are not allowing traffic east on 17th and Guerrero. 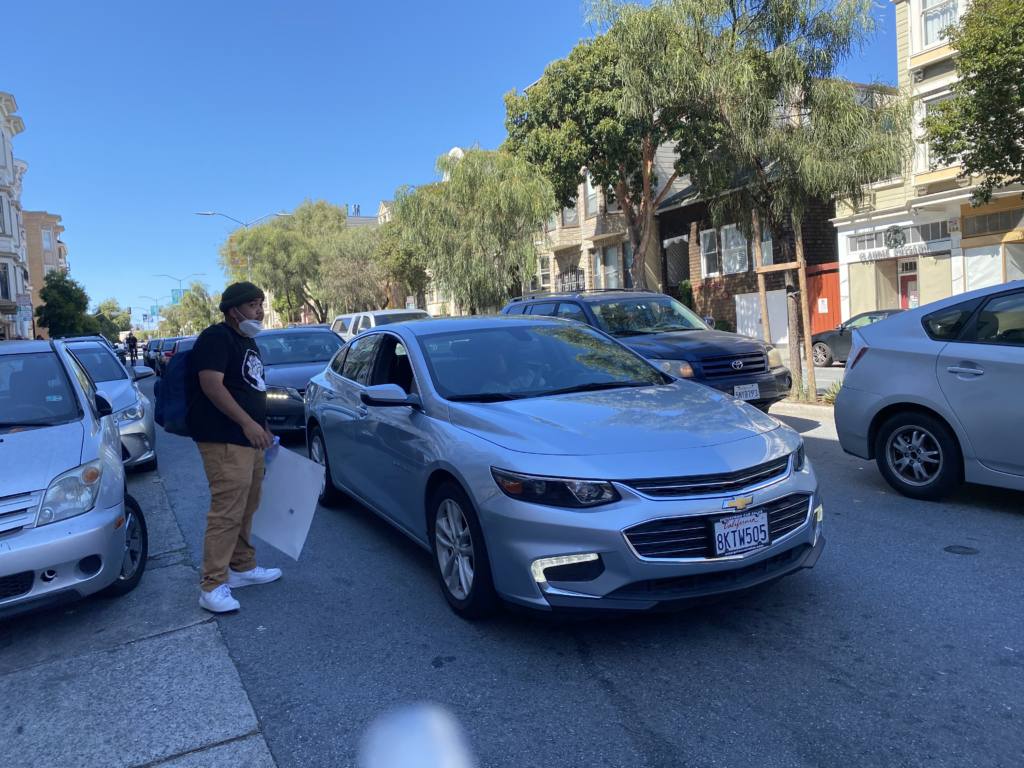 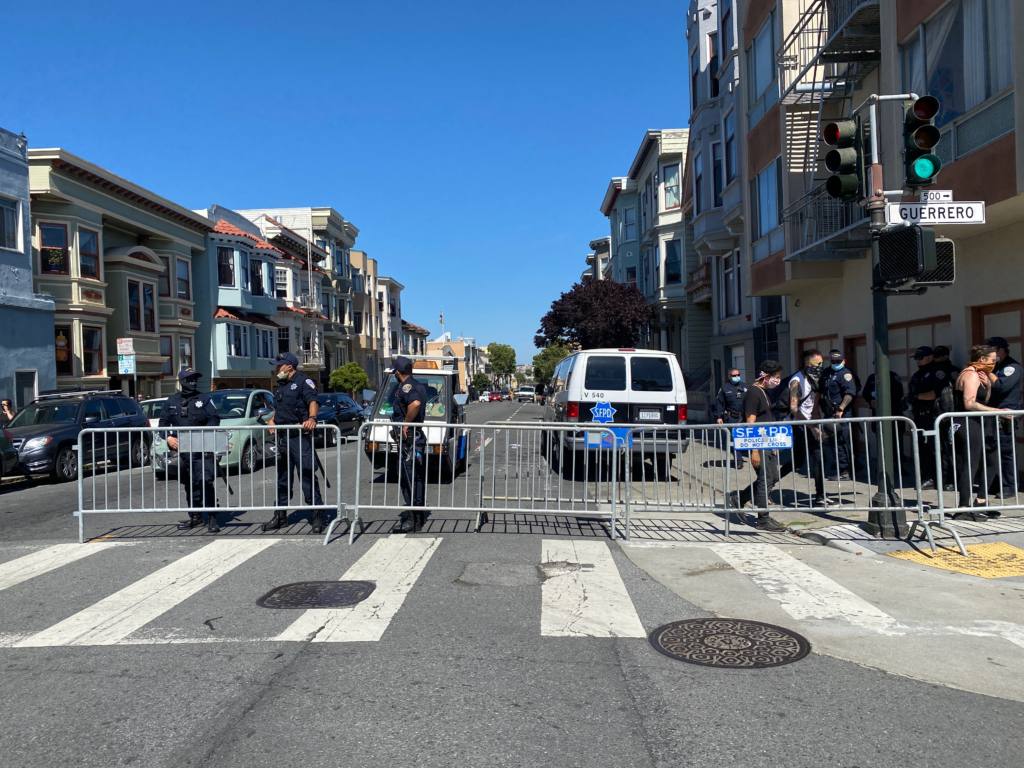 Officers block off traffic east on 17th and Guerrero. Photo by Lydia Chavez.

3:30 p.m.: About 30 minutes before a protest of the killing of George Floyd is set to begin, more than 1,000 people have already turned out to the area in front of Mission High at 18th and Dolores. The death of Floyd, which took place after a Minneapolis police officer kneeled on his neck for eight minutes, has sparked protests nationwide and throughout the Bay Area, with Americans of all stripes calling for the end of police brutality writ large.

In front of Mission High, demonstrators appear to be physically distancing, and as the sun beats down on protesters, organizers pass out water. Eighteenth street, between Dolores and Church, is currently blocked off to traffic. 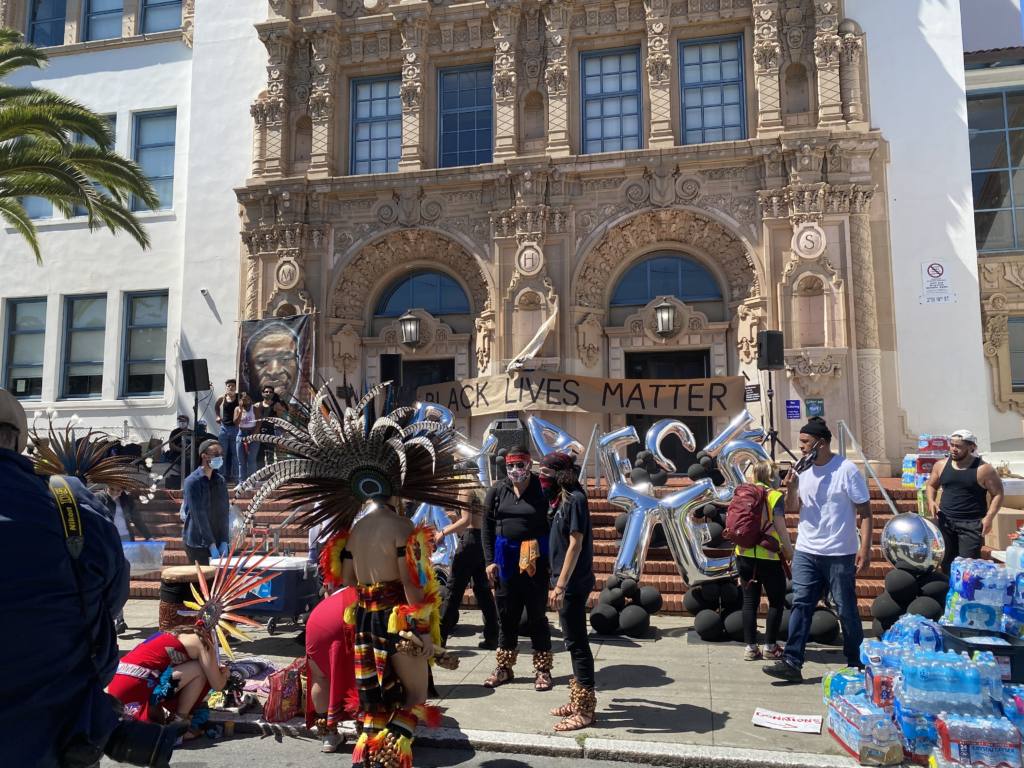 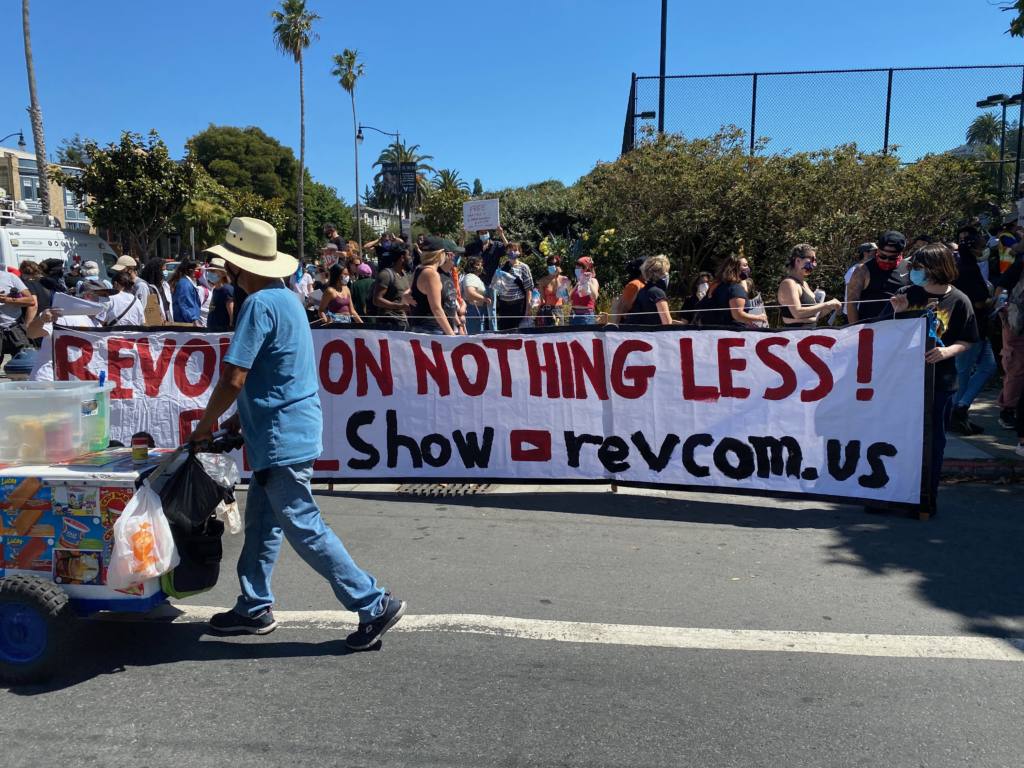 We will update this post regularly as the demonstration progresses.