A line of police blocks Powell Street to the public, February 2018.

The reduction included only the across-department cuts that the mayor has requested in response to the city’s worsening financial situation, and not her recent proposal to take funding from the police to redistribute to the black community.

But even this proposal failed to impress the commissioners, who were none too pleased with its lack of detail.

“We asked for last time, when the budget was on, for you to give us a breakdown of what these salaries consist of,” she added.

“It’s hard from this to understand the big picture,” Commissioner John Hamasaki said.

The commissioners even questioned the short, bullet-pointed list of “budget priorities” cited in the proposal.

“When you talk about ‘investing in collaborative reform,’ what does that mean?” Elias asked. “We keep hearing people say all these great things, but when it comes to making it happen or walking the walk, it doesn’t.”

“It feels like it’s last-minute; it feels like it’s not complete for me to really make decisions on what we’re doing,” said Commissioner Petra DeJesus. “I’m not comfortable, I got to tell you, moving forward or passing this budget. I don’t feel like I have enough information and I certainly couldn’t gather that from the presentation we were given.”

Catherine McGuire, executive director of the San Francisco Police Department’s Strategic Management Bureau, said the timeline she was currently working under was extremely compressed. Normally the entire budget process would take six or eight months, but they’re trying to get it done in just three or four.

But this explanation only went so far. 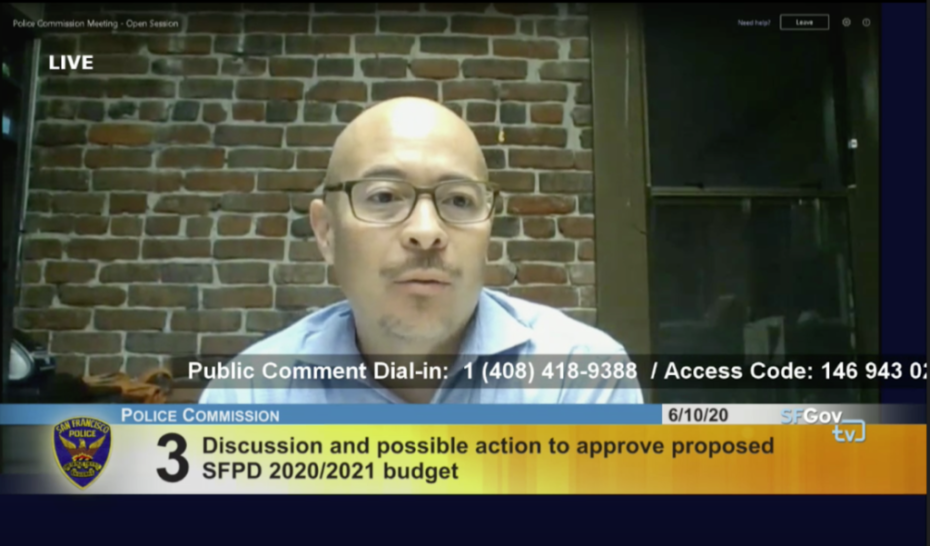 Commissioner John Hamasaki. While the graphic says June 10, the meeting lasted until 3 a.m. on June 11.

“I try to be accommodating, I try to be fair — but we ask for the same thing every time we do a budget,” Commission Vice President Damali Taylor said. “Every time we ask for more detail. I get that it’s always a rush job, but you’ve got to start listening.”

Ultimately, all commissioners voted down the proposal.

“All departments are being asked to cut. We are among them,” said McGuire. The $23 million on the table Wednesday night was a figure the mayor’s office asked for, she said.

The cuts primarily would have come from removing 173 currently vacant positions. Patrick Leung, the department’s chief financial officer, told the commission that roughly 90 percent of the police department’s budget emanating from the city’s general fund goes to personnel costs.

The mayor’s office also asked the department to identify an additional $11 million that could be cut in a “contingency.” But the proposal, as submitted, identified only $1.4 million of where that full contingency amount would come from.

“We’re not quite there,” McGuire said. “We are proposing that we go ahead and submit what we know we have available to cut, and then continue from there should the mayor decide she would like to take more.”

These proposed cuts were, again, unrelated to funds that Mayor London Breed and Supervisor Shamann Walton said they plan to redirect from the SFPD to black community causes. Details of those fund diversions, which Walton described to Mission Local as hopefully being “at least $25 million,” have yet to be nailed down.

“We don’t know what it looks like yet,” Police Chief William Scott told the commissioners. “Everything is still fluid right now.”

“So, there could be cuts on top of this that you’ll be coming back to us for?” Taylor asked.

“There could be,” Scott answered. “There are a lot of details we just don’t have right now.”

Even if the budget proposal had been passed by the commission, it wouldn’t have been immediately set in stone. The next steps would have been to submit it to the mayor’s office as part of the budget process — but the mayor herself has authority to change a submitted budget, McGuire said.

“She balances the budget, then submits it to the Board of Supervisors — and then they can tinker with it, too,” McGuire told the commission.

The vote came after more than five hours of public comment.  Hundreds of callers dialed in to the remote meeting to decry the police department and call for it to be defunded and abolished.

Several callers were rich with satire. One identified him or herself as Lucifer, living in Hell beneath Pacific Heights, and asked for the department’s budget to be increased by several billion dollars. Another simply played an audio clip of the infamous “Shame!” scene from Game of Thrones.

“Just so the public is clear, this commission does not have the authority to defund the police department,” Taylor said. “For anyone that has researched defunding, you’ll know that this is not something that happens [instantaneously].”

“I do think that defunding the police is a goal that we can all work towards together,” Hamasaki said, but he added that it can’t happen overnight.

A number of callers referenced a Mission Local story that broke during the meeting, revealing that the Police Commission in 2019 agreed to a recommendation from the Department of Police Accountability to terminate the officer who shot and killed Jessica Williams in May 2016.*

Sgt. Justin Erb was, instead, suspended for 45 days.

Taylor attempted to explain that vote, saying that a settlement had been worked out with the SFPD and Department of Police Accountability.

Elias said that she and DeJesus did not support the settlement.

DeJesus said that would give her just a couple of hours of rest, before she needed to get up at 5:30 a.m. to go to work.

Correction, June 15, 2020: An earlier version of this article included a paragraph that incorrectly stated that Commissioners Damali Taylor and Dion-Jay Brookter voted in favor of a reducing the disciplinary sentence for Sgt. Erb. In fact, they merely voted in favor of the settlement agreement formulated with the Department of Police Accountability.

We sit through nine-hour meetings so that you don’t have to. If you haven’t yet, please support local media.