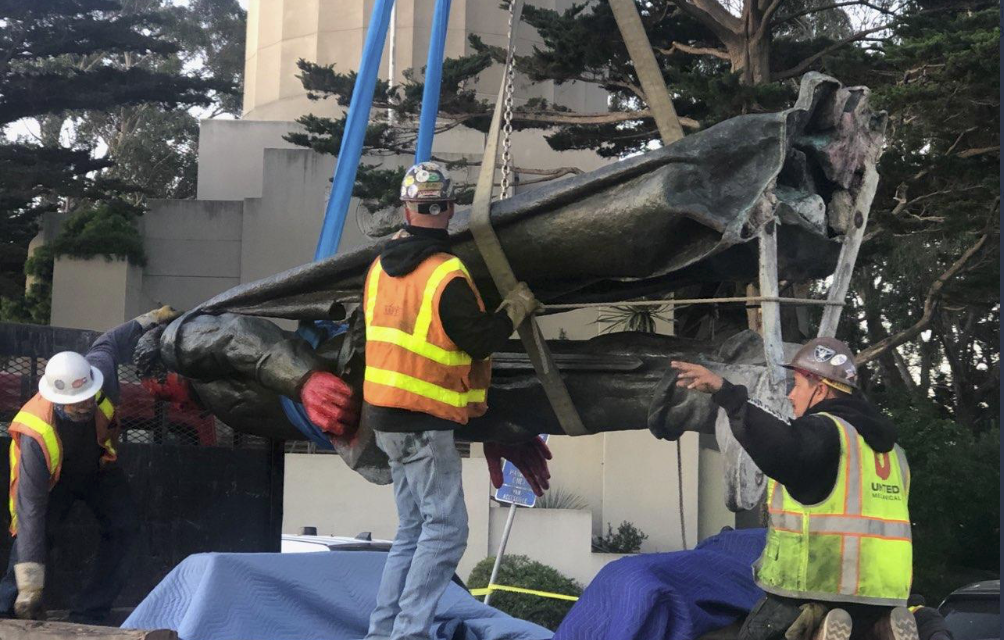 Caught, red-handed: The Coit Tower sculpture of Christopher Columbus — oft-defaced and subject to a protest on Friday — was removed this morning by city crews.

Christopher Columbus never knew where he was going, so perhaps it’s fitting that, this morning, his likeness at Coit Tower was pulled down by a crane, loaded onto a flatbed, and hauled off to parts unknown.

Perhaps that warehouse can be claimed in the name of Spain.

The man who created this monument, Vittorio de Colbertaldo, was the official sculptor for Mussolini and a member of his ceremonial “Black Musketeer” bodyguard. So today’s action is doubly fitting: This is not the first time a major element of Colbertaldo’s life has been forcibly taken down and hauled through the streets in chains.

The removal of this sculpture, like Ernest Hemingway’s extremely versatile description of bankruptcy, came gradually, then suddenly. Years of complaints about venerating a man who was renowned, in his own time, for his cruelty, spiked in post-George Floyd America — and culminated a day before a planned protest in which the statue was ostensibly to be toppled, dragged to Pier 31, and tossed into the Bay.

Your humble narrator earlier this month half-jokingly tweeted that nobody knows what Columbus looked like, so this sculpture could simply be renamed after someone who actually deserves a public monument.

But, clearly, in the real world, this manner of legerdemain would not do. The sculpture needed to come down because honoring Christopher Columbus in 2020 is repugnant — but, also, because Pier 31 is a hell of a long way from Coit Tower, that statue is very heavy, and, on top of everything else, we don’t need anyone being squashed by a falling monument as took place in Virginia last week.

All art in The City is under jurisdiction of the SF Arts Commission, which will decide what comes next.

The following statement is from Supervisor @AaronPeskin, who represents the area: pic.twitter.com/QDNcf8XpGN

The process of selecting what manner of public art should replace this monument promises to be heated — the Native American Italian woman that would satisfy all sides doesn’t seem to exist, and, unlike the city’s extant sculpture collection, there isn’t yet a rich patron underwriting it.

These promise to be bitter discussions, but there’s no reason they can’t be honest ones. This city has other, more pressing problems, but a city can do two — even three or maybe four — things at once.

And why stop here? The flatbed that motored Columbus off to purgatory may well have taken Columbus Avenue. Coit Tower did not hold a public monopoly on racist monuments, and the life stories of many of the men — and they are, invariably, men — memorialized in street names are often jarring discordant with the professed values of this city (or any 21st-century locale averse to keeping slaves or murdering people).

Christopher Columbus is the Aunt Jemima of public monuments or street names. The documentable racism many people grew inured to over the years simply couldn’t be explained away anymore.

But he’s not alone. And if the painful discussions we’re due really are to be honest, there need to be more of them. 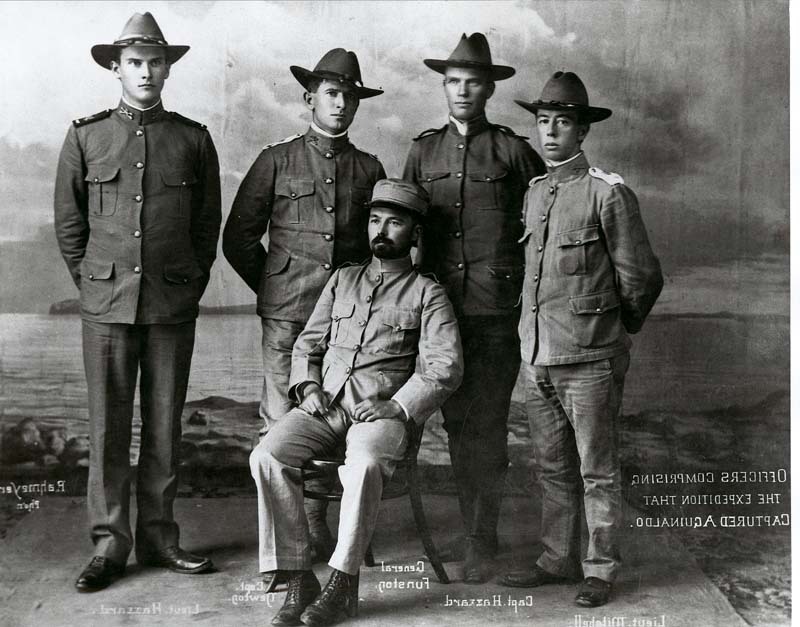 Gen. Frederick Funston, seated, boasted about hanging dozens of Filipinos without trial, and praised the efficacy of lynchings.

Naming streets isn’t something this city used to take all that seriously, it seems.

In 1855, Charles Gough was tabbed to the committee in charge of naming the streets in the Western Addition.

Gough may have picked a few deserving winners. But he, ostentatiously, picked himself, too — that’s why, 165 years later, every San Franciscan can tell you that this milkman’s name rhymed with “cough.”

He also named a street for his sister, Octavia, and his buddy and fellow milkman, Leopold Steiner. Well, plus ça change. In present-day San Francisco we strive to show inclusivity and demographic openness and hold countless public meetings — and, in the end, the job still goes to the work buddy of the guy who’s on the deciding committee.

This city could do well to reassess the rationale behind memorializing people via street names (or not memorializing them; cities in other parts of the world actually list the birth and death years and professions on streets named for actual people. A similar practice is undertaken in The Presidio.).

Somehow, San Francisco has not yet named even an alleyway after Harvey Milk. But there is no shortage of streets named after men whose relevance in today’s world was simply owning lots of land and having lots of money in 19th-century California — Henry Newhall, Peter Donahue, and others.

More objectionable, however, are men tainted by slavery, colonialism, murder, or genocide. You may not know about that, but you’ve all but surely walked these streets. To wit:

You can navigate from one end of this city to the other on streets named for the colonialists who — actively and passively — enslaved and killed off the state’s native inhabitants. The streets named for members of Juan Bautista De Anza‘s exploratory party alone include Acevedo, Arballo, Cambón, Font, Gonzalez, Grijalva, Higuera, Moraga, Pacheco, Pinto, Serrano, Tapia, Taraval, Vicente, Vidal, Yorba — and, of course, Anza.

And don’t forget the sculptures. You can still find monuments to Funston, anti-Asian mayor and Senator James D. Phelan (“Keep California White”), anti-Asian unionist Andrew Furuseth, and slave-holder and National Anthem scribe Francis Scott Key — who, as a District Attorney, attempted to have a man hanged on charges of merely possessing abolitionist literature.

“The problem is, these are all statues based on the choice of rich people who gave money to the city,” summed up a frustrated longtime city official. “It’s not like anybody thinks Phelan is worthy of a statue.” Rather, he continued, “Nobody is writing a check for Maya Angelou.” 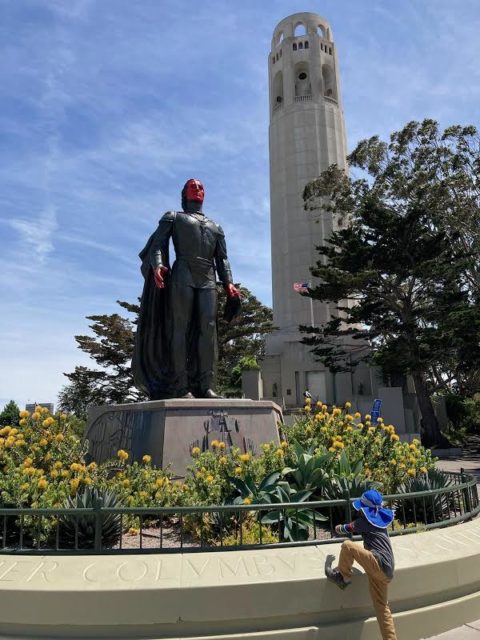 The Christopher Columbus statue on Monday, June 15. Its days were rather numbered.

Long before the flatbed rolled up to Coit Tower this morning, San Francisco was reconsidering the wisdom of some of its public art and place names.

The city in 2018 removed the “Early Days” sculpture, depicting a supine Native American at the feet of white men, from Civic Center Plaza (the space is now serving as a fenced-off COVID-19 homeless encampment). In that same year, the city moved to strip the name of former Rep. Julius Kahn, the driving force behind the 1902 extension of the Chinese Exclusion Act, from a playground.

Also in 2018, Phelan Avenue, near City College, was renamed Frida Kahlo Way (the street, incidentally, was not named after the racist politician James Phelan but his father … James Phelan. Nobody seemed too conflicted about this.).

One year prior, the city removed Justin Herman’s name from Embarcadero Plaza, giving the former redevelopment boss the same treatment he gave so many African American families in the Fillmore.

Former Polish president Lech Walesa is the rare man who outlived his street. In 1986, the Solidarity leader thanked the San Francisco officials who named a City Hall-adjacent street after him (it was quite a party; Joan Baez was there). In 2014, after Walesa proved to be a vitriolic homophobe, the Board of Supervisors approved an ordinance to strip his name from the street in favor of Gay Games founder Dr. Tom Waddell.

It may only be symbolic, but it’s a start. We become inured to the meaning behind our monuments and place names, and now is a good time to question their value and relevance.

We should not forget our troubling past. Quite the opposite. But we shouldn’t name a street after it, either.

We could use a donation from you. Please support us now.