Zen and Art of Campaigning from Your Room: A chat with state senate hopeful Jackie Fielder 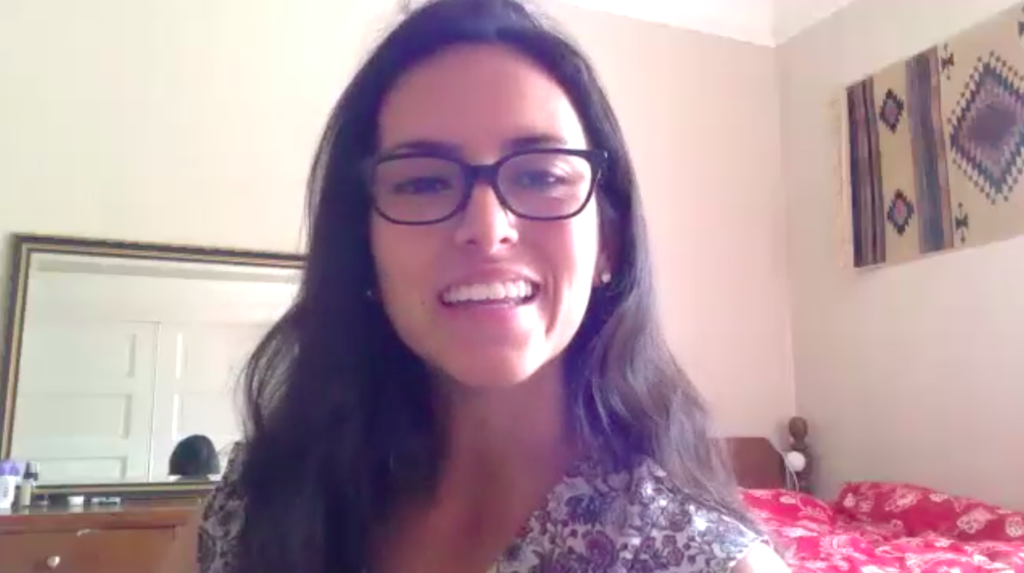 Jackie Fielder speaks to Mission Local from her home.

On a computer screen, if you squint just enough, Jackie Fielder’s comforter looks like it’s covered in the white roses that have come to represent the Democratic Socialists of America.

Fielder is, indeed, a 25-year-old Democratic Socialist running for state senate in the November election. But she informs me that, no, the blanket is just a blanket — not a political statement.

In fact, few things in Fielder’s room, at least those easily viewed on a computer screen through a Zoom chat on a recent Monday, are overtly political. A pile of unfolded clothes sitting on top of a hamper. A meditation cushion in front of the window. A Zapotec rug on her wall “that I honestly got from Craigslist.”

Fielder exceeded her own expectations in the March 3, 2020, open primary, where she took 33 percent of the vote in her bid for the District 11 state senate seat. Standing in a room full of volunteers at a bar on Mission Street on Election Night, she acknowledged her campaign is “a giant effort and a long shot.” But her mind still remained on one goal: “Absolutely, to win in November.”

Supervisor Dean Preston, who was also at Fielder’s packed election party, said the numbers showed Fielder had consolidated her progressive base — but more work remained to swing the extra 20 percent she needs. That 20 percent, he said, would be gained by pounding the pavement and introducing herself to voters who did not know her. At that election night party in early March, Preston believed Fielder could do it.

“She’s just getting started,” he said.

Two weeks later, San Francisco entered into a shutdown. Businesses closed. People withdrew indoors. The traditional “boots on the ground” electoral playbook of knocking on doors and posting up at bus stops was rendered impossible. Fielder, like almost everyone who can manage to be, is stuck in her room.

“We’ve done no canvassing since the primary,” she said.

But life is still okay.

After a breakfast of fried eggs and zucchini — and maybe a cardio workout — her campaigning from home begins. Emails, of course. And then Zoom meetings with her team on strategy and policy. Perhaps a training to add bodies to her 800-strong army of volunteers, which includes quite a few college students “who now have a lot of time.” Fielder says she has not met any of them in person.

“We have what feels like a secret campaign now, because it’s all virtual,” she said. “But we’re ramping up phone banking.”

“Most people are fine,” she says of the residents she talks to. “It’s just there’s perhaps an uncertainty about the future — or general boredom.”

Many, she says, “agreed they don’t see much from Sacramento that is affecting their lives in any dramatic sense.”

And, more important, the state has not been able to assuage their economic anxiety. “I especially talk to seniors on fixed incomes and the rising cost of housing,” Fielder said. “They are uncertain about the future.”

Fielder believes she can help them. The outbreak, says campaign director Roísín Isner, gives Fielder’s message an “intense urgency,” as “the issues that we had been campaigning on prior to the outbreak became much more significant.”

Housing was the first that came to Fielder’s mind: “I’m looking at a wave — a tsunami, if you will — of evictions and foreclosures.” To soften the blow, she said, the state should require banks to forgive mortgages of mom-and-pop landlords proportional to what their tenants have not been able to pay during the shelter-in-place period — similar to legislation that has been proposed in the state of New York.

Right now, there’s simply a moratorium on evictions — until some future time, when evictions can commence once more. That’s not good enough, Fielder said.

There are other looming issues. “Single-payer healthcare — that’s big, obviously,” she said. “The coronavirus has exposed that we cannot go back to a society where healthcare is dependent on someone’s employment.”

Add to that the inequities of federal assistance: “As we saw with the distribution of [Payroll Protection Program] loans, it’s really the most wealthy and clearly, like, English-speaking, well-resourced businesses that are able to benefit from it.”

Public banking, a system that would, ideally, provide low-interest loans to ordinary people during a time of crisis — and one of Fielder’s signature issues — would be a remedy.

Sen. Scott Wiener will be a formidable opponent for Jackie Fielder. Photo by Abraham Rodriguez.

Fielder believes these are the kinds of solutions Californians need. The ones Wiener is championing, she said, are not “bold” enough.

Wiener responds in disbelief when we speak by phone: “I’ve been accused of many things, but not being bold? That’s not one of the criticisms that people level,” he said. “If you were to go to my colleagues in Sacramento and say, ‘Scott’s opponent says he’s not bold,’ they’d spit their coffee out.”

Wiener says he’s spent most of his time since the lockdown commenced “working with constituents who were in crisis” to renegotiate leases and access to government assistance.

“I was working hand-in-glove with my staff,” he said. “There were just an absolutely huge number of constituent needs in some of the areas you would expect.”

Since the legislature reconvened two weeks ago, Wiener has been pushing for two bills to protect tenants: one that will allow commercial renters to break from a lease if they’re under financial stress, and a rent-reduction bill he’s co-authoring with Assemblyman Phil Ting, for which they are receiving a lot of “pushback from the landlords.”

“We could introduce a bill canceling all rent, and that bill would not make it out of a single committee,” Wiener said. “We could feel really good about that — but I’d rather introduce legislation that has a shot at passing and that actually helps people and makes people’s lives better.”

That Wiener, an incumbent and preternaturally prolific legislator, has the ability to be even more active during the pandemic may be an unfortunate snag for Fielder’s campaign. But asked whether the pandemic gave her opponent an advantage, Fielder said: “I don’t know if that’s true.”

“We just called 4,000 voters last week,” she said, speculating that Wiener’s campaign may not be doing the same.

She appears to be right. “My campaign has not been a big focus for me in terms of physically what I’m doing,” Wiener said. He’s been too busy responding to the pandemic and doing the work of a state senator, he said.

Fielder wishes she could do similar work. “If anything, it’s frustrating that I’m not in a position of power to help their material circumstances, or at least try to,” she said of the low-income people she distributes hand sanitizer and masks to once a week at housing projects in Sunnydale and the Western Addition.

Being stuck in a bedroom for most of the day does not ease her frustration. At times, she said, “things have been just so boring and it’s hard to stay fresh and motivated.”

To help, she’s drinking more coffee and has taken to meditating. In fact, the day we spoke was the first day Fielder followed through on a promise to herself to try meditation. “It was good,” she said. “It was really good.”

“You know, meditation doesn’t solve your problems, but I think it extends your ability to deal with them,” she continued.

She is equally zen about her campaign. “The campaign is always there, and we do what we can,” she said. “But I’m not one to fret about events that are not under my control.”

What’s in her control, she said, “is bringing attention to these bigger, bolder changes that we’ve been needing — and we need even more now.”