UCSF Medical Grand Rounds: The doctor is ready to send children back to school — with care 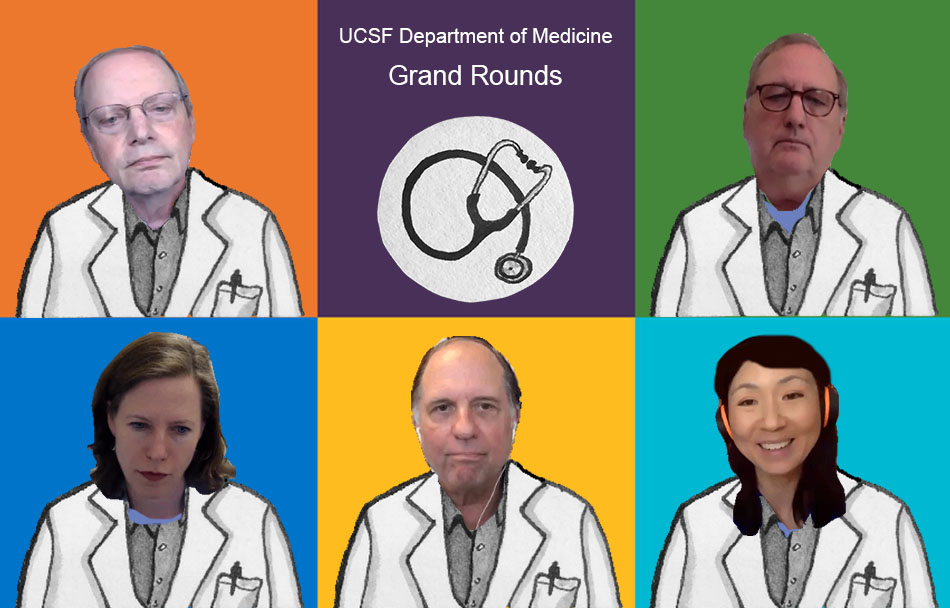 The roller coaster of the scientific community’s COVID-19 pandemic response was on full display during UCSF’s 90-minute Grand Rounds Thursday afternoon, as scientists provided the latest on treatments, vaccines, and how the schools may look when they reopen — very likely in the fall semester.

“Fasten your seatbelts,” said Dr. Bob Wachter, the chair of UCSF’s Department of Medicine and the forum’s moderator.

“Keep your hands and arms inside the ride at all times,” agreed Dr. George Rutherford, a UCSF professor of epidemiology, as he explained that California has seen around 86,000 COVID-19 cases and roughly 3,500 deaths — and the state continues to add 1,800 cases and upwards of 75 deaths per day.

But his presentation mainly focused on the spread among children, and he made it clear that children suffer from the disease far less than adults. Only 2.1 percent of American COVID-19 patients are under 18 years old, according to the Centers for Disease Control, and a review of 1,065 Chinese patients 17 and under found that most presented mild symptoms. One died.

In Iceland, a study showed that none of 848 randomly selected children under 10 years old tested positive for the illness. “Are we just missing them?” Rutherford said he’s been wondering. “But this would really suggest that there’s very little transmission from child to child.” He described transmission as more of a “one-way street” from adults to children.

Wachter brought the discussion back home: “How do you think about school reopening policies, given what we know about transmission?”

School should reopen, Rutherford said. “We should do it carefully.”

Schools should “cohort” groups of children in classes, he said, perhaps with smaller groups in the morning and afternoon. That will be easier with young children.

“High schools are going to have to really use their imagination about how … to separate different classes,” he said. “So if you have to take out half of the desks in a classroom, you’re going to have to do twice as many classes to get the same number of kids educated.”

When asked, Rutherford was less concerned about the Kawasaki-like disease manifesting in children, as “this is still a very rare complication.”

Next up was Dr. Annie Luetkemeyer, Professor of infectious disease at Zuckerberg San Francisco General Hospital, who talked about the Food and Drug Administration giving the emergency green-light for the use of remdesivir, an antiviral, as a COVID-19 treatment.

But not all is rosy, Luetkemeyer explained. There are limited quantities of the drug — enough for 85,000 to 150,000 patients currently in the hands of the federal government, with enough for 1,500 to 2,900 patients allocated to California.

Given that she found the state’s 1,800 cases per day to be “pretty scary,” she said, “it’s clear that we’re going to need more remdesivir than what was just provided to the United States government, although that’s a good start.”

“Remdesivir is not easy to make,” she added.

Otherwise, convalescent plasma, which takes antibodies from patients who have recovered from COVID-19, “looked quite safe” based on the data. “But, really, the million-dollar question is, does it work?” she said. “And we need randomized control trials to evaluate this.”

“There really isn’t that much to say,” she continued, mentioning the oft-cited “cardiac safety concerns” and a dearth of data to say either way if the drug does anything at all.

Wachter, ever more comfortable in his role as intrepid journalist, asked: “If it weren’t for ‘Patient-One’ believing in hydroxychloroquine based on the data as it exists today, would this drug be forgotten and we’d have moved on to other things? Is that what’s keeping it in the news?”

Luetkemeyer declined to get political, and said we should wait for the results of ongoing studies before putting the drug’s future use “to bed.”

Treatments are considered a necessity as the world looks for a successful COVID-19 vaccine. And the latter is a long way off, explained Dr. Joel Ernst, chief of the division of experimental medicine at ZSFG.

But there is hope. Ernst discussed a recent trial that gave 45 patients varying doses of a new vaccine by Moderna, which uses RNA to trigger an immune response. The eight people who received the lowest doses developed so-called “neutralizing antibodies,” which have been effective in neutralizing past viruses, but which scientists are not yet certain are effective in preventing COVID-19. “We don’t have proof yet,” Ernst said.

Next, the vaccine will be tried on 600 people, including subjects older than 55 — a group most vulnerable to the virus. “The track record that we have, particularly with influenza vaccine, is that older adults don’t respond as well to standard vaccines,” Ernst said. “And so the question will be: is this vaccine sufficiently efficacious in people at high risk because of their age?”

That would take a longer time than the other option: a so-called “human challenge” trial. In order words, vaccinating people, infecting them with the virus, and seeing what happens. “That is actually a controversial issue in a disease like COVID-19, because we don’t have a treatment for COVID-19,” Ernst said, adding that predicting a severe outcome of infection is still difficult. “So that makes it hazardous to take that approach.”

However, Ernst said, a challenge trial has its advantages: “It’s much more rapid. It’s much less expensive.”

And the pros and cons of the Moderna vaccine, specifically? “RNA vaccines can be produced in large quantities fairly quickly,” Ernst said. The downside is, “there is no RNA vaccine approved for human use in any country in the world,” and “there’s not a long track record of injecting RNA vaccines into humans and knowing what the long-term complications, however rare they are, might be.”

Dr. Susan Kim, an associate professor in the division of pediatric rheumatology at UCSF, touched on an ongoing scare for a COVID-19-related symptom in children: “Multisystem Inflammatory Syndrome in Children,” or MIS-C.

The symptoms are fever, swelling and redness in the extremities, and others. It first appeared in Italy in April in 10 children, and soon after 40 cases in the United Kingdom — but instances remain rare.

Remarkable about the disease, according to Kim, is that instances of Kawasaki, a syndrome MIS-C mimics, is highly prevalent in Asia, particularly Japan.

But the new, possibly COVID-related MIS-C has not shown up in Asian countries. “So it’s very, very striking that they have not seen this,” Kim said. “I communicated with the teams there and they just are not seeing it. It’s amazing.”

Kim also noted that the syndrome usually shows up in children two to four weeks past the peak of infection, which initially presents as “mild or asymptomatic.” In fact, said Kim, children did not test positive for COVID-19 with a basic diagnostic test, and required antibody tests to confirm they had been infected with the virus.

“This disease keeps surprising and shocking,” Wachter said. “The more we know, the more we learn every week.”

If you enjoyed this wrap-up, support Mission Local’s work.