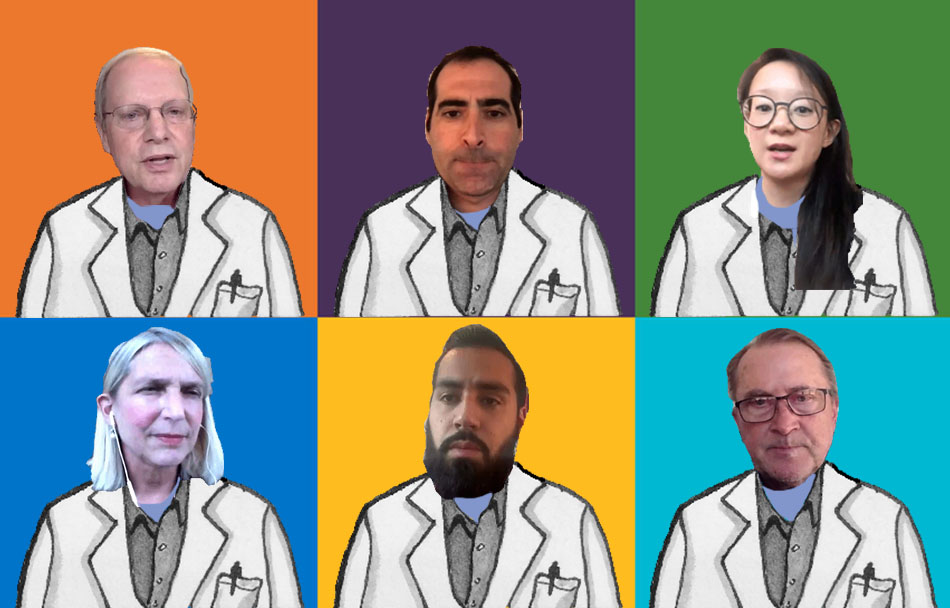 UCSF doctors who provided support to New York City’s hospitals gave a candid briefing of their experience during Thursday afternoon’s Medical Grand Rounds: At times, they had no idea what they were doing.

“You’re literally struggling to stay above water,” said Dr. Michael Peters, an assistant professor of medicine at UCSF, who has worked at NewYork-Presbyterian in Queens for the last month to help with the surge of patients.

Peters, an experienced physician, acknowledged that he and other doctors were relative novices in treating COVID-19. With staff and supplies stretched thin, he described an intensive care unit packed with 100 patients, all lined up and separated by only curtains, with “drips, drugs, everything scattered all over the place.” For every 14 patients, he recalled, there were two nurses.

“I had never been in this hospital before,” he said. “They were all the sickest patients I’ve ever taken care of.”

Amid the chaos, he and other doctors had to make fast and tough decisions. “And I’m not entirely sure all of them are right,” he said. “I’m pretty sure that many of them were wrong, actually, but they were the best, you know, that we were making at the time.”

Dr. Michelle Yu, a UCSF professor of medicine, worked at the Cornell Medical Center in Manhattan. She was humbled by the experience. “There’s only so much the medical profession can do because there are limitations — resource limitations, personnel limitations — that we don’t have a lot of control over,” she said.

She said there was a struggle for resources, even between sister hospitals. Some patients had only fentanyl patches for pain reduction because the hospital had run out of sedation drips, she said.

“Why couldn’t the hospital send drips over to their sister hospitals in the boroughs?” she asked, as if the question still bothered her. “Why couldn’t we accept more patients?”

“This may be true or not, but I think that centers like Cornell were accepting patients who were the most saveable in some ways. So not necessarily the sickest, but maybe the most stable for transfer,” she continued. “And I know that a lot of patients that were out in the boroughs never got the chance to come for higher-level care.”

The somber briefing kicked off the 90-minute Grand Rounds. Dr. Bob Wachter, the chair of the Department of Medicine at UCSF who moderates the weekly forum with doctors, said the account was both “inspiring” and sobering.”

“Those of us who were back here are just admiring what you did and what you’ve learned,” he said. “And you will teach us some of the lessons that you learned there, including both the inspiration and humility.”

Dr. Diane Havlir, an infectious disease professor at UCSF, and Jon Jacobo, a member of the Latino Task Force for COVID-19, spoke further about the study that tested 4,160 Mission District residents and workers last month.

As Mission Local has reported last month, 2 percent of those tested were positive for the virus and more than half were asymptomatic. However, the results were disproportionate: 95 percent of positive cases were Latino and 90 percent reported not being able to work from home.

Jon Jacobo said he knew of disparities going into the tests — with a disproportionate number of Latinos testing positive citywide. “But I will be honest, I was shocked myself when it was 95 percent,” he said. At present, Latinos comprise 43 percent of the nearly 2000 confirmed cases in San Francisco, while making up 15 percent of the population.

Havlir agreed. “When we all saw these results, I think most people were really a bit spellbound,” she said. “And it was shocking. It was sobering.”

Havlir said that of the 74 people who tested positive, 41 did not have a primary care doctor, and UCSF was working with them until they receive their first appointments. Some 53 percent were asymptomatic. Only one patient went on to be hospitalized, and UCSF is following up to see how many others later experienced symptoms.

The study was also an experiment in a “test to care” model, she said, emphasizing that a strong relationship with policy-makers, scientists, and community is “the most effective and efficient way to combat an epidemic.”

In contrast to the Mission study, a similar April study conducted in Bolinas, a rural-suburban community in Marin, found that none of the 1,847 residents tested were positive, said Dr. Bryan Greenhouse, an associated professor of medicine at UCSF.

How effective are antibody tests?

Next up was a discussion of the efficacy and accuracy of antibody, or “serology,” tests — tests that detect the presence of certain antibodies in the blood and determine whether a person has already had COVID-19.

These tests are getting a lot of attention because the FDA hastened the approval of a slew of tests. Antibodies could confer immunity, and plasma from carriers could treat patients.

Dr. Alex Marson, the director of the Gladstone-UCSF Institute of Genomic Immunology, talked about his study testing 10 rapid antibody tests (so-called “lateral flow assays”) and one lab-based test. “It does seem that some tests appeared more reliable than others in giving true positives and true negatives,” he said.

In other words, the jury is out on how effective some of the tests are.

“Did the FDA make a bad decision by being so liberal in approving all of these tests to come and look at the test characteristics?” Wachter asked.

It was a tough question. “I think I’m not going to comment on FDA decisions,” Marson said. “The broader context is that there is an urgency to come up with tests.”

Finally, Wachter asked Dr. Michael Busch, director of the Vitalant Research Institute, a question he has put to several doctors over the past few weeks: “What’s your gut tell you, in terms of the level of immunity that a patient who’s recovered from COVID has, and how long it will last?”

Busch said a “large majority” who have experienced the illness — and perhaps even a large proportion of people who were asymptomatic or had mild symptoms — “will be protected from reinfection from one to two years.”

But “that immunity will wane,” he said. And without a vaccine and the long-shot prospect of herd immunity, “we’re a long way off from being protected from this virus.”

If you enjoyed this wrap-up, support Mission Local’s work.