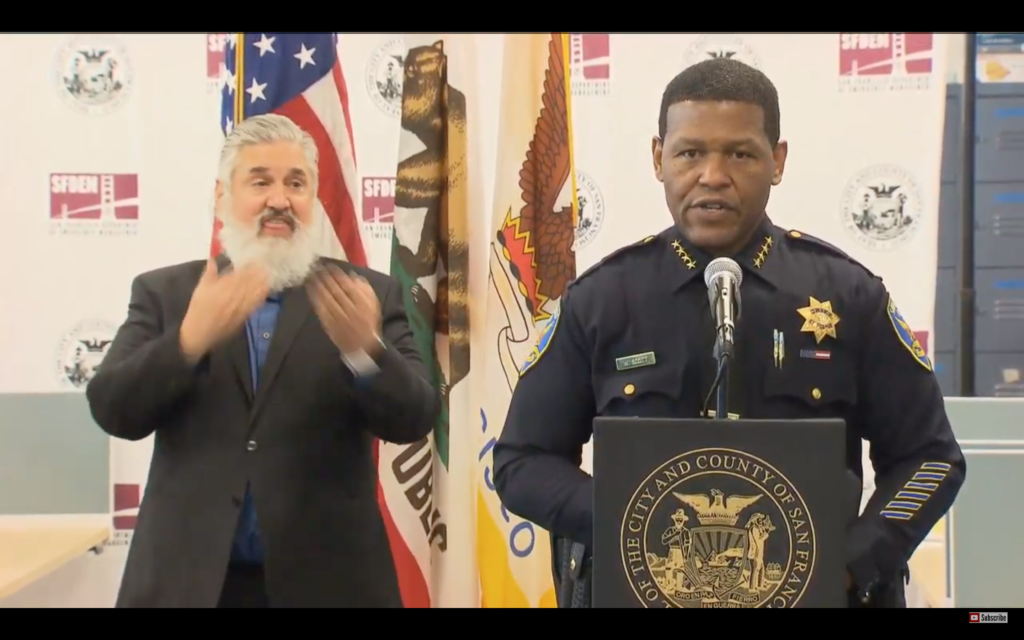 San Francisco Police Chief Bill Scott urged San Franciscans to abide by an indefinite curfew that will go into effect at 8 p.m. Sunday night, noting most San Franciscans could be cited — or even arrested — if they’re out past the cutoff time.

“Stay at home,” Scott repeated over and over again during a Sunday morning press conference.

The announcement first came around 11 p.m. last night as the city’s peaceful protests of the police killing of George Floyd in Minneapolis devolved into looting, fires, and attacks on police and civilians. Similar chaos is taking place throughout the Bay Area and the country.

Following the press conference, the mayor sent out a list of specific exemptions to the curfew:

“Until we see that the situation is under control,” Breed said, “we will allow the curfew to remain.”

Breed and Scott both said they will allow peaceful protests to continue during the day. They recognized the importance of people’s pain and their right to “express” themselves peacefully. As African Americans, the mayor and police chief said the video of George Floyd touched them personally.

“The thing that was the most disturbing is when he called out for his mother,” Breed said of the video an officer pinning Floyd under his knee as Floyd said, “I can’t breathe.”

“That is what we know is at the heart of the protests,” Breed said.

Officials said that protests in San Francisco on Saturday remained peaceful during the day, but as night fell, “things began to heat up,” Scott said. He reported that there were attacks on police officers, firebombs thrown into businesses, and businesses destroyed and looted. Despite the pandemonium, he reported no injuries.

Much of the looting and destruction appeared to take place downtown and along Market Street. A CVS at Market and 2nd was looted, as well as portions of the Westfield mall.

Protests that passed through the Mission during the day remained peaceful, despite tense standoffs with police at a 13th Street freeway onramp.

Scott said police made 10 felony arrests, and detained many others.  “Last night our primary object was to save lives,” he said.

San Francisco Fire Department Chief Jeanine Nicholson said that the firefighters had to extinguish “dozens and dozens” of fires to businesses, cars, and on the street throughout the city on Saturday night.

“We responded to 250 medical calls,” she said. “Many of those were a result of the violence.”