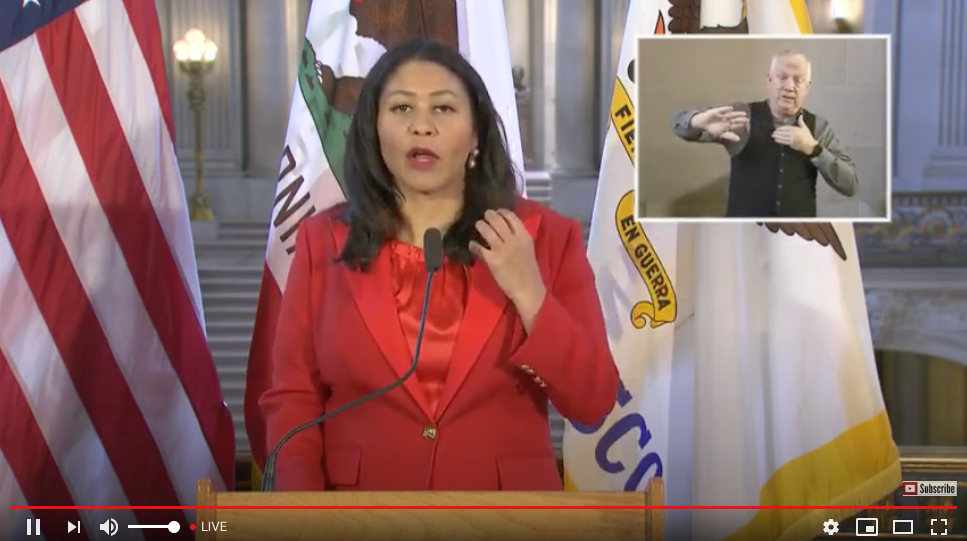 Mayor London Breed on May 28 announced a San Francisco-specific re-opening timeline. She also said masks will now be required when within 30 feet of another person.

Wearing masks now required when within 30 feet of others

Following days of grumbling among Bay Area county health officials regarding the vague and flimsy proclamations made by Gov. Gavin Newsom, Mayor London Breed moments ago announced a series of San Francisco-specific timelines to, basically, fill in the blanks.

This timeline, notably, is city-specific; it does not pertain to the other Bay Area counties under a regional shelter-in-place order, and was crafted without their input.

Come June 1, Breed said, “child care [centers] that are not able to open will be open.” So will “botanical gardens and places that are outdoors.”

On June 15, “Phase 2B,” the city plans to re-open “most indoor retail.” By then, the mayor said “you’ll have the opportunity to allow people to come in stores.” We can also look forward to “outdoor dining,” “religious services and ceremonies,” and “pro sporting events with no spectators and approved health plans.” Also scheduled for mid-June is “private household indoor services,” such as housekeeping or nannies.

“Phase 2C,” on July 13, could see the return of indoor barbershops and salons and real-estate open houses. And, possibly in mid-August, Phase 3 will usher in the return of schools “with modifications,” nail salons, tattoo parlors, bars, playgrounds, swimming pools, and indoor museums. Finally, Phase 4, coming at an indefinite point in the future, will feature concerts, festivals, sporting events, and hotels.

These timelines are dependent upon the city’s COVID-19 statistics moving on a low trajectory.

To ensure that, “we’re required to get a little more strict with the face-coverings,” Breed said. “We’re asking when you’re outside and, say, enjoying the park, if you’re within 30 feet of someone, wear a face covering.”

Breed urged San Franciscans not to act like the “mask police” when coming across a person not covering his or her face. But she also emphasized that city businesses are entitled to refuse service or entry to people not wearing masks.

Today’s press conference comes amid mounting confusion regarding varying dictums issued by the state, and a multiplicity of responses from California’s 58 counties.

San Francisco officials described this announcement as “an attempt to provide more guidance” — a term reiterated by Breed and fellow city officials often during today’s press conference. But, again, while San Francisco is under a regional shelter-in-place order also covering Marin, Santa Clara, Alameda and Contra Costa counties — San Mateo has dropped out — today’s guidelines were locally crafted and pertain to San Francisco only. 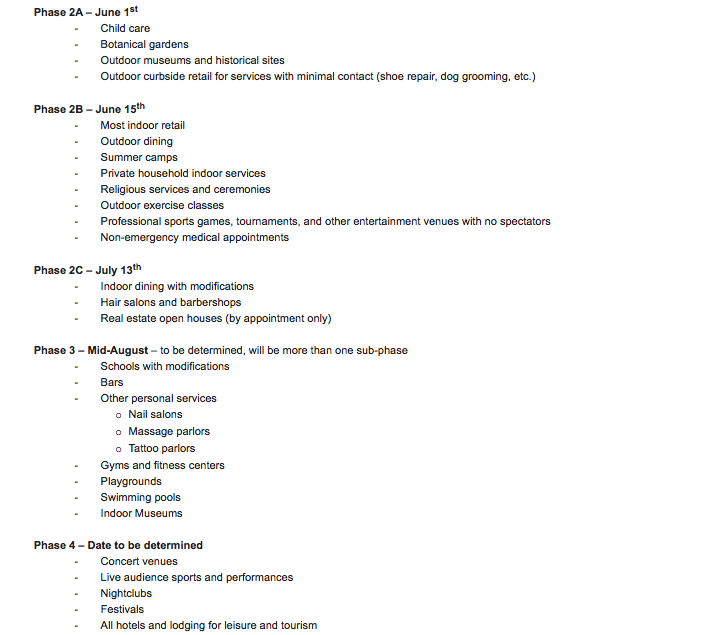 Breed and Health Department director Dr. Grant Colfax defended San Francisco going its own way as the proper thing to do with regard to our specific city with its specific needs.

And that resonated for some out-of-county officials.

“We’re going to vary on the specifics between counties for good reasons as we move forward,” Dr. Matt Willis, the health officer of Marin County, told Mission Local. “The city is moving more cautiously, partly because it’s also the most densely populated. Risk of rapid spread is higher.”

San Francisco officials told Mission Local that “other counties are appreciative” of the work San Francisco has done and “may use it as a model for what they do.” Officials in three other counties we contacted, however, had not heard about today’s timeline announcement prior to the mayor’s press release and were not privy ahead of time to its details.

San Francisco officials told Mission Local that this county has not dropped out of the five-county group.

Officials in other counties, meanwhile, expressed consternation about any broad moves from San Francisco — or any county — considering retail curbside pickup and other loosenings of earlier restrictions were only allowed on or about May 18. The incubation period for COVID-19 can stretch into two weeks or more, so there has not yet been time to reflect on the data.

“We are still very aligned in our goals and in recognizing that we need to follow a cadence of reopening that’s based on the virus and incubation periods,” he said. Decisions need to be “metered in at least two-week intervals, based on indicators we’ve agreed to.”

What hospitals and caseloads across the Bay Area will look like two weeks from Memorial Day weekend, meanwhile, remains to be seen.

“Our county is rising in cases and hospitalizations, so we’re not moving forward soon,” noted a government official from across the Bay.

Another government official noted that Breed’s task is a difficult one: “How do you give people relief without making too many promises if our numbers start skyrocketing?” he asked.

“We shut everything down with a dozen cases, and now we’re reopening with thousands.”