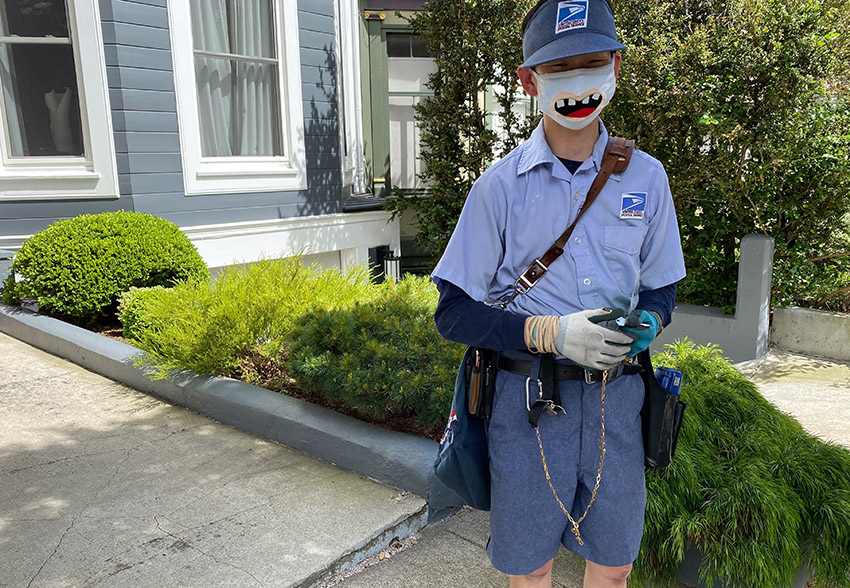 ‘If anyone is fixated on 30 feet, they are missing the point.’

There’s just no shortage of things to be furious about these days.

We’re in the midst of a pandemic and cursed with inept, reactionary leadership; bands of armed yahoos have taken over statehouses with impunity; police in Minnesota casually snuffed out the life of George Floyd, accused of the grand crime of buying a pack of smokes with a bogus $20 bill, leaning on his neck as he screamed for his mother and family and pleaded for his life before dying in the gutter — and, now, nationwide protests have devolved into fiery and destructive melees, with police often escalating the violence and even targeting members of the media.

Over the weekend, witnesses described organized looters targeting businesses in San Francisco. And, boom, we have an 8 p.m. curfew.

So there is, again, no shortage of things to be furious about.

Being mandated to wear or carry a mask out-of-doors during a plague shouldn’t be one of them. 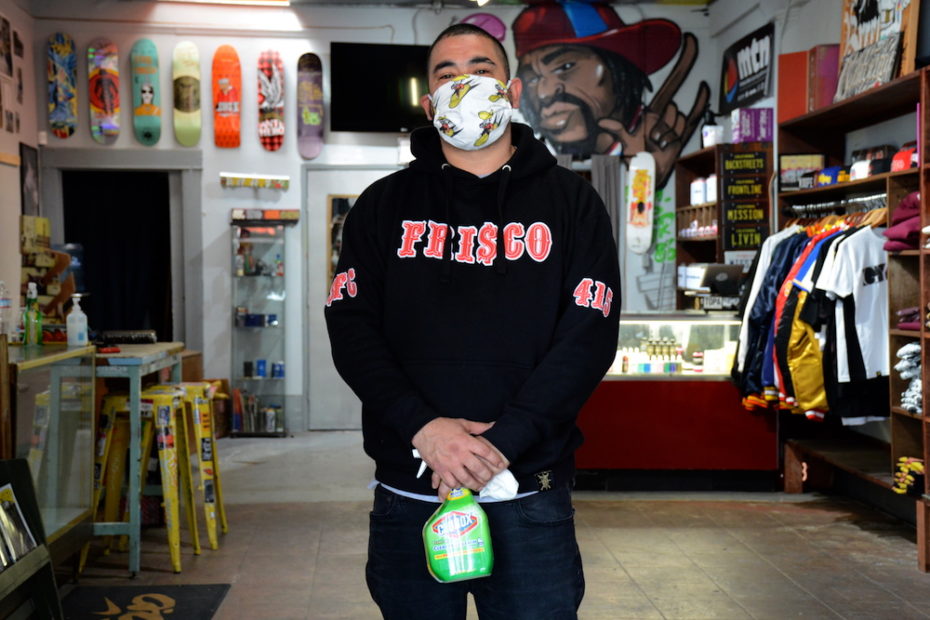 It feels like a lifetime ago, but it was Thursday. Mayor London Breed announced a new, San Francisco-exclusive timeline for re-opening the city. The ongoing rupturing of the five-county (formerly six-county; bye, San Mateo) consortium of health officers is no small deal. But that’s not what got the attention — or the opprobrium. No, it was the jarring announcement that San Franciscans are now required to put on a mask when walking, biking, or running within 30 feet of one-another that seemed to draw all eyes.

How the real world will react to this measure remains to be seen. But the level of indignation and this-is-the-last-straw! sentiment online was notable.

And that’s understandable, if not particularly smart. We’ve all altered our personal habits a great deal over the past several months; if you’re not among the (disproportionately black and Latino) people with no choice but to head into work every day and get sick — and die — this seems to be one more indignity impeding our way of life.

Everyone in the city is sporting a haircut from a 1970s baseball card — and now this? It’s a global pandemic and 100,000 Americans are dead — but how can I be made to put on a mask while jogging if someone passes two car-lengths away? This is the last straw! 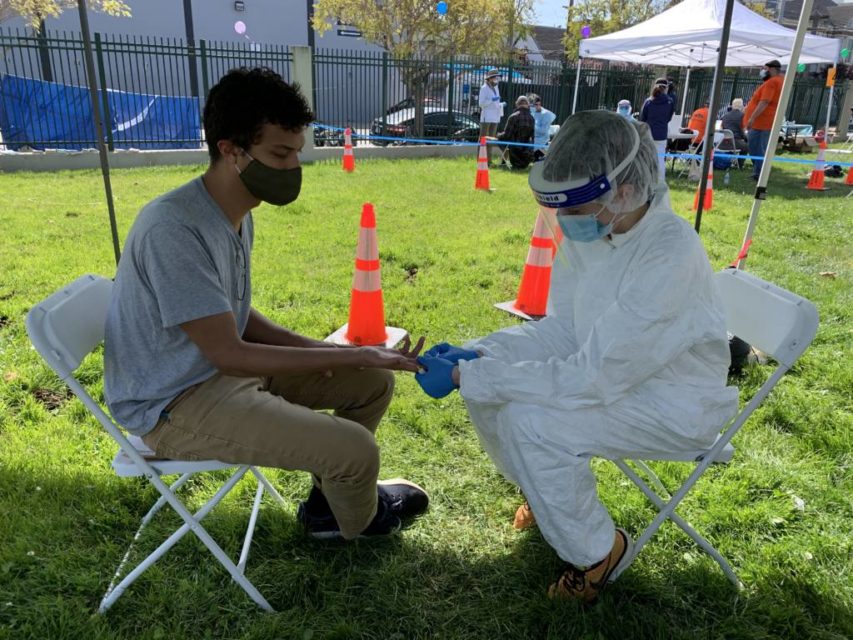 If you’re wondering what the science is behind 30 feet, relax — there isn’t any.

“If anyone is fixated on 30 feet,” Scott continues, “they are missing the point. The point is: If you’re within six feet of people, you will have a significantly lower risk of infecting other people or infecting yourself if you have a mask on. Is that risk eliminated at seven feet? No.”

Where does six feet even come from? Scott’s UC Berkeley counterpart, Dr. John Swartzberg, notes that any viral particle 10 microns or greater is heavier than air, and will likely fall to the ground within six feet. Smaller particles — and there are many — will float in the air. “There’s a whole range. You can draw a bell-shaped curve.”

So that’s where six feet comes from. In Europe and the Spanish-speaking world, people are recommended to stay two meters apart, which is about six-foot-six or one Draymond Green’s-length. It’s not as if there’s a difference in the airspeed velocity of an unladen coronavirus particle on this continent or that — it’s all just probabilities and estimations and communicating to people in the terms they know.

San Franciscans who watched cop shows with crime labs featuring three-dimensional holograms were disappointed to learn our actual crime lab was a rickety warehouse with a feral cat infestation. The situation isn’t as dire with regard to the data we use to craft COVID-19 proclamations, but there’s a lot fewer three-dimensional holograms than you’d hope for. (Blessedly, there are no cats).

“We are improvising based upon some principles of virus transmission. It’s mostly based on historical data — which is imperfect,” says Scott. “People’s expectations are too high. People expect us to give them the best recommendations based on the best science and the scientific evidence. But we haven’t had time to nail down all the science. We haven’t had time to establish that data.”

But the science we do have, Scott continues, informs us that near-universal mask-wearing saves lives. And, in the midst of a pandemic, it’s just not so counterintuitive — or such an imposition — to be asked to wear a mask out-of-doors. 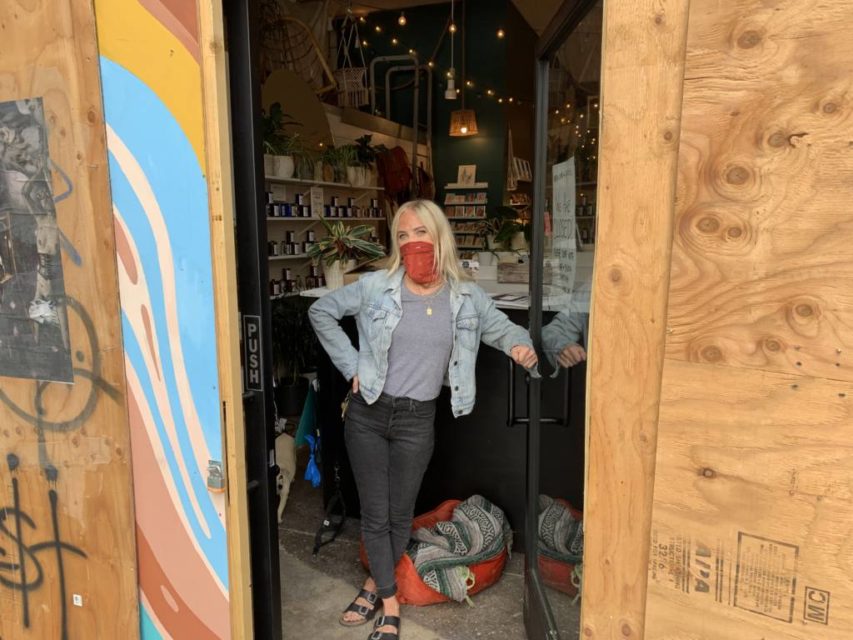 Sarah Larson opened her shop Often Wander on May 18 for pick-up. Photo by Julian Mark

Well, sort of. Not as crazy as the online commenter who wondered (in jest, let us hope) if mask manufacturers had contributed to Mayor Breed’s coffers. (Of note, Big Mask could probably use more sway in this country, not less. And this order, like all health orders, was delivered by Health Officer Dr. Tomás Aragón. Politics, like plastic particles, gets into everything, and San Francisco’s city-county setup allows for politicians to wield no small amount of influence over ostensibly independent officials. But elements of the mayor’s office have complained bitterly behind the scenes about the gradual pace of re-opening dictated by Aragón; it would be a stretch to say that he is in lockstep with the mayor or wholly subservient to her.).

Could you be infected with COVID-19 at a 30-foot range? Every infectious disease specialist your humble narrator spoke with said: you could. But you could also be struck by lightning in a movie theater.

But, as Scott noted, fixating on 30 feet is counterproductive. It also reveals that the complainant hasn’t read the health order.

The purpose of this order is not to allow police to arrest you at 29 feet, 11 inches. Rather, it’s to give you time to put on your mask by the time you get close to other individuals (left unsaid: If you can avoid getting close to people, you should do that. And wash your hands.).

Here’s the text from the order:

The 30 feet (10 yard) distance is used here to give people adequate time to put on a Face Covering before the distance closes and the people are within six feet of each other, which puts them at greater risk for transmission of the virus. As more activities are permitted, more people will be near each other without much advance warning, making wearing a Face Covering essential when people are within 30 feet.

This applies to people on streets or other public rights-of-way, who are “walking, running, biking, otherwise exercising, standing, or engaged in transportation such as using a motorcycle, skateboard, moped, or scooter.”

If you’re sitting on a blanket in a park, and you’re six feet (or two meters or one Draymond or whatever) from the next blanket, then, no, you don’t need to be wearing a mask.

San Francisco’s dictum, which allows for mask-free picnics in the midst of a pandemic, is actually less restrictive than what many, many more people are required to do in Los Angeles. There, you pretty much have to wear a mask out-of-doors full-stop — and it applies to everyone over age 2, while San Francisco’s order is for those 12 and older.

Counterintuitively, by being more permissive, San Francisco may have also riled people up more. The simple message of “just wear a mask” has been diluted and the arbitrary distance of 30 feet has been highlighted and mocked and denigrated.

And complexities rile people up. But, Rutherford continues, “I think people just want to be riled up.” And, he notes, “Tomás doesn’t write these. The City Attorney writes these. That’s why they come off as so legalistic. But this is reasonable. This is as reasonable and well-worded as a legal document is gonna get.”

Having a mask on hand and wearing it when near people is so easy. This is such an easy problem to remedy right now.

“Wear a mask in public and we’ll get through this faster,” says Scott. “It should be so simple.”