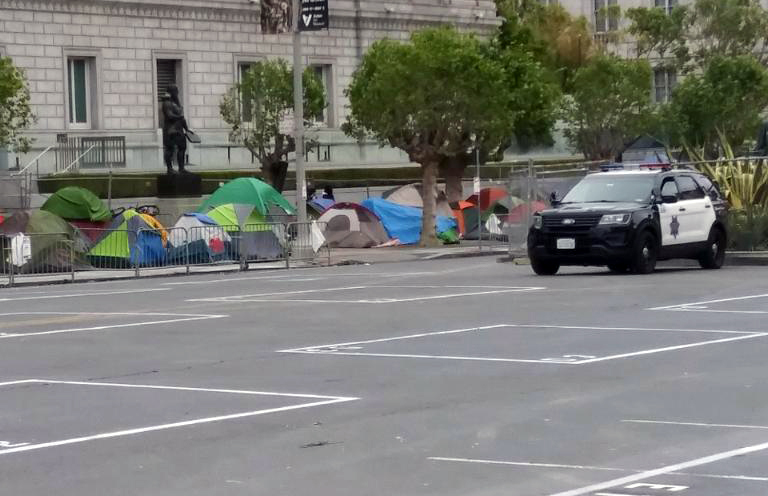 Fifty tents will be allowed to stay in the Fulton Mall Safe Sleeping Village seen here with marked tent spaces on Fulton Street between Larkin and Hyde. Photo by Christy Shrilla.

Advocates for the homeless said they are grateful for the attention the mayor is giving the Tenderloin in the city’s new neighborhood plan. But they complained about the delay — and, more immediately, the lack of planning to move the homeless people living on the streets of the Tenderloin to hotels and less dense neighborhoods.

Jeff Kositsky, the manager of the Healthy Streets Operations Center, announced the Tenderloin Neighborhood Plan for COVID-19 earlier this month to address problems around safety, health and security. It will focus on 13 blocks and 153 homeless residents, but it will eventually assist all of the 310 counted homeless individuals living in the 49-block area of the Tenderloin.

The first 13 blocks have 159 tents, 32 encampments, and 153 individuals, according to an April 22 count. That count of tents showed a 71 percent increase citywide and a 285 percent jump in the Tenderloin since January. Six of the 13 priority blocks (see map) had no homeless services when the count was made.

The city introduced its plan in the immediate aftermath of UC Hastings suing the city over the squalid conditions in the Tenderloin. The problem, advocates said, is that the plan does not address sheltering the homeless or thinning out the Tenderloin’s overcrowded streets (Hastings’ dean blasted it as “entirely inadequate” and “just more talk.”).

“Everything that is happening is about two months too late,” said Christy Shrilla, a resident and advocate for the homeless in the Tenderloin who is also a board member of the Tenderloin Community Benefit District. “We’re eight weeks into a crisis.” The plan, in her estimation, is “just not enough.”

Added Pratibha Tekkey, the director of community organizing at the Central City SRO Collaborative, added:  “I know it’s a complicated issue. We’re talking about people and people’s lives. … I feel like the city let it happen for all this time.”

The overcrowded conditions in the Tenderloin were underscored early on in the crisis in letters from the Tenderloin Community Benefit District (TLCBD) and District 6 Supervisor Matt Haney.

“Responding to this urgent public health concern will require extraordinary action,” wrote Simon Bertrang, the executive director of the benefit district, who, in the March 26 letter called for the city to act “without delay.”

“Delays in addressing the need for shelter among unhoused residents has meant the streets have been crowded with tents,” Haney wrote.

In the letter, Haney outlined eight plans, including designating safe sleeping sites and “immediate and priority placement of people on the streets into hotel rooms.”

“As far as the Tenderloin is concerned, it’s just too dense to fit all of these people, both housed and unhoused, safely,” Shrilla said.

Jennifer Friedenbach, the executive director of the Coalition on Homelessness, said it is “disappointing” how there is a mismatch between the need and the city’s current plan.

“We’re glad that they’re talking about it, trying to address it. Like, that’s very appreciated,” she said. “But we’re concerned that there’s not more of a problem-solving in conjunction with the unhoused residents and that there’s too much focus on enforcement.”

Friedenbach, Shrilla and others have pushed the mayor — without success — to put the homeless in hotel rooms. To date, the mayor and other officials have resisted that pressure and instead said they would focus on only the vulnerable population 60 years and over and those with underlying health conditions.

The 2019 Point-in-Time Count estimated that 10 percent or 803 of the 8,035 people experiencing homelessness in San Francisco were age 61 or older.

The Tenderloin plan estimates that about 40 people out of the 310 individuals living on the streets of Tenderloin would qualify for a hotel room.

If hotel rooms are unavailable, Freindenbach said, “At the very least, open up Civic Center Plaza, which is a large green space there where people could spread out,” Friedenbach said.

Tekkey, the director of community organizing at the Central City SRO Collaborative, said the parking lots listed in the plan, such as the vacant lots at 180 Jones and on Hyde and Turk, are “extremely small.” To abide by social distancing protocols, they can only host up to 15 tents.

“It doesn’t make sense to have 10 tents in each parking lot,” she said. “You’re still not changing what the problem is.”

That is, hundreds of homeless people in a dense neighborhood alongside 25,000 housed residents who also do not feel safe leaving their homes and going to essential businesses during the pandemic, Tekkey said.

“I think the fact that they’re not truly giving areas outside of the Tenderloin that are less dense a real look is a huge pitfall,” Shrilla added. 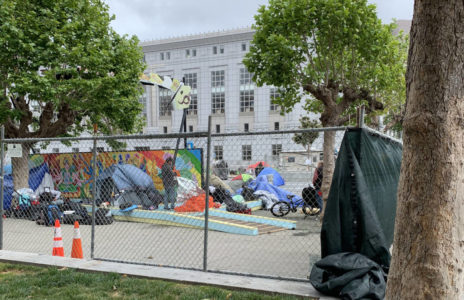 Encampment outside the Asian Art Museum, as of May 13. Photo by Christy Shrilla.

Shrilla offered the large encampment near the Asian Art Museum as a case in point. It has “90 tents and counting,” and was considered “extremely unsafe and unhealthy,” according to the Tenderloin plan. To remedy this, the plan recommended creating a safe sleeping site on Fulton Street between Larkin and Hyde  – an area that can only hold up to 50 tents, according to Jonathan Streeter, a city spokesman. 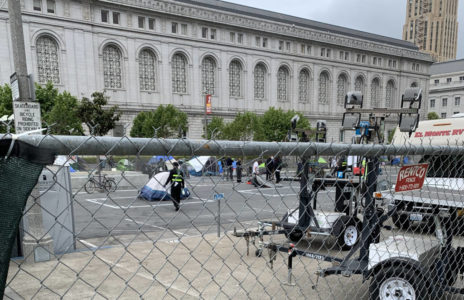 Tents are being moved onto marked spaces on Fulton Mall. Photo by Christy Shrilla.

Shrilla from the Tenderloin Community Benefit District said that she has repeatedly asked the city about where the 40 other tents would be placed, but she has not received a response.

Streeter said that the city does “acknowledge that not all people” at the encampment can stay. He did not offer any answers as to where the overflow of tents would go.

He also reported that the city started moving the tents and spreading them out on marked tent spaces on Fulton Street today.

Tekkey worries that because the plan does not address housing the unhoused, the plan would soon be inefficient as the city slowly reopens the economy — more people would be back outside while hundreds of people remain unmoved from the streets of the Tenderloin.

“In six months, if we don’t have this crisis, you can’t just ask people to leave,” Tekkey said. “You need to house them.”