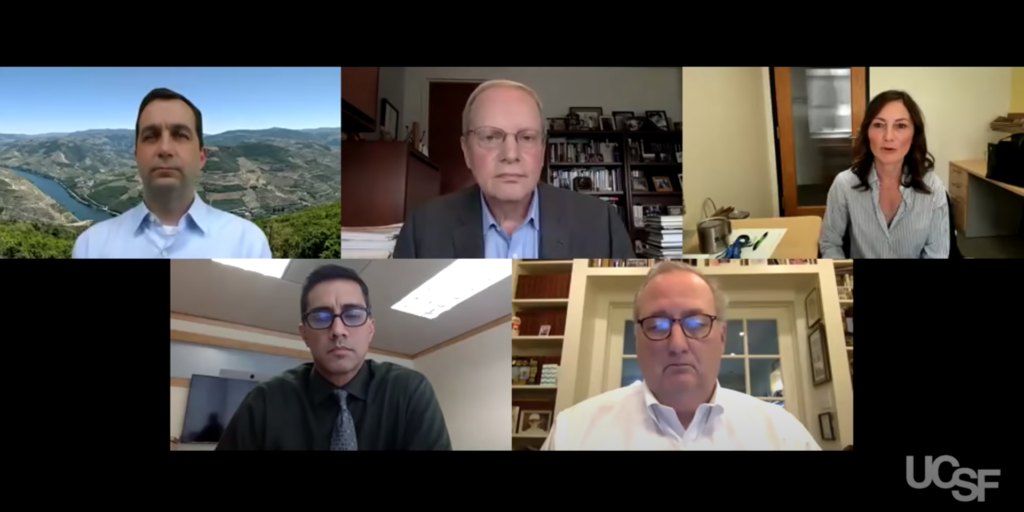 “They arrived in the middle of the night,” he said. “I will never forget sitting in the ambulance bay when the first two patients rolled up — a husband and wife that looked terrified because of everything around them.”

“It forced our organization to … ” his voice trailed off “ … we were in the game quickly.”

On Thursday, Sehgal told this story to everyone watching UCSF’s weekly grand rounds program, one generally visited by other medical staff and students. But nowadays, the hour-long briefing — a mixture of hard facts, ruminations and anecdotes about what it’s like to be on the front lines — is increasingly a must-watch for anyone interested in hearing what the country’s leading teaching and research hospital is thinking and doing about the pandemic.

The 49ers anecdote was one of many, and made losing look a whole lot different. “The best gift we could have been given was the 49ers losing,” he said.

The ensuing celebrations and parades could have been catastrophic.

While one journalist made this a story in and of itself, any number of stories, leads and perspectives come out of the weekly grand rounds thanks to an early decision by UCSF leadership to be as open and transparent with information as possible. Readily available online, UCSF’s grand rounds has become increasingly popular — recordings usually receive more than 10,000 YouTube views, and the latest session had 3,000 live viewers on Zoom.

“We tried to be really intentional on creating different vehicles and different forums to present information in different ways,” Sehgal explained in the last broadcast.

Dr. Bob Wachter, chair of UCSF’s Department of Medicine, who has largely been the public face of UCSF’s efforts, agreed. “It’s led to a level of trust that helps everyone get through a lot of uncertainty.”

Aside from the fact that our state of affairs is horrifyingly abnormal, it’s unusual in all the best ways to watch the scientists at a leading medical research institution discuss and share information in real time with their colleagues and the public. On top of the grand rounds sessions, UCSF also does a virtual town hall on Friday afternoons. And Dr. Wachter tweets daily updates on the latest information, including the number of cases the hospital is serving, how many people are in intensive care, and how many are using ventilators.

Doctors discussed the early “whirlwind” in the emergency room — one that has since waned with a 50 percent drop in patient volume — and whether there was fear among healthcare workers. There’s “no time to have much fear,” said Dr. Maria Raven, UCSF’s chief of emergency medicine, adding that, what fear they do have, mostly stems from not having enough protective equipment.

For Dr. George Rutherford, a professor of epidemiology and biostatistics, UCSF’s move to be transparent with this information was a natural one. “We’re not dealing with a sentient enemy here,” he told Mission Local by phone. “I can understand in war why they don’t tell you everything because you don’t want to tip your hand. Here, where the battle is against a barely animate creature, information is really powerful.”

A “grand round,” he explained, is a medical tradition that once saw physicians and medical students gather around a patient to discuss a problem, though recently they have become more like ordinary lectures that anyone can attend. With the coronavirus touching the lives of almost everyone, “it really gives you a much bigger audience,” he said, especially because now they can be accessed online.

Dr. Rutherford was one of the panelists in the most recent grand rounds, which will be live again at noon this Thursday. In the last broadcast, he provided a thorough overview of his current thinking on such questions as: What needs to happen for society to return to normal life? Is social distancing working in San Francisco? When, exactly, will California coronavirus cases peak?

To the first question — which is the ultimate question for many — Rutherford said that, first, transmission needs to be low — “low, low, low,” he said. That means a low number of cases and a low number of hospital admissions. Secondly, testing must be developed on demand and be wide-spread. Third, there needs to be vigorous contact tracing, supervised isolation, and a supervised quarantine apparatus. Fourth, adequate hospital, ICU, and ventilator capacity. And fifth, he said, continued restrictions on mass gatherings and staggered returns to workplaces and schools need to take place.

Sharing such crucial information “doesn’t take much time out of my day,” Rutherford said, though he did say he’s been working day and night.

He noted, also, that he’s in unusually high demand, as a colleague once remarked that, before this crisis, “society lost its collective fear of epidemics” such that it’s become little more than “a dinner party conversation.”

But now, with almost everyone terrified of the new coronavirus, he said, “I’m gonna dine out on this for the rest of my natural life.”