As government assistance dries up, SF small businesses have to get creative 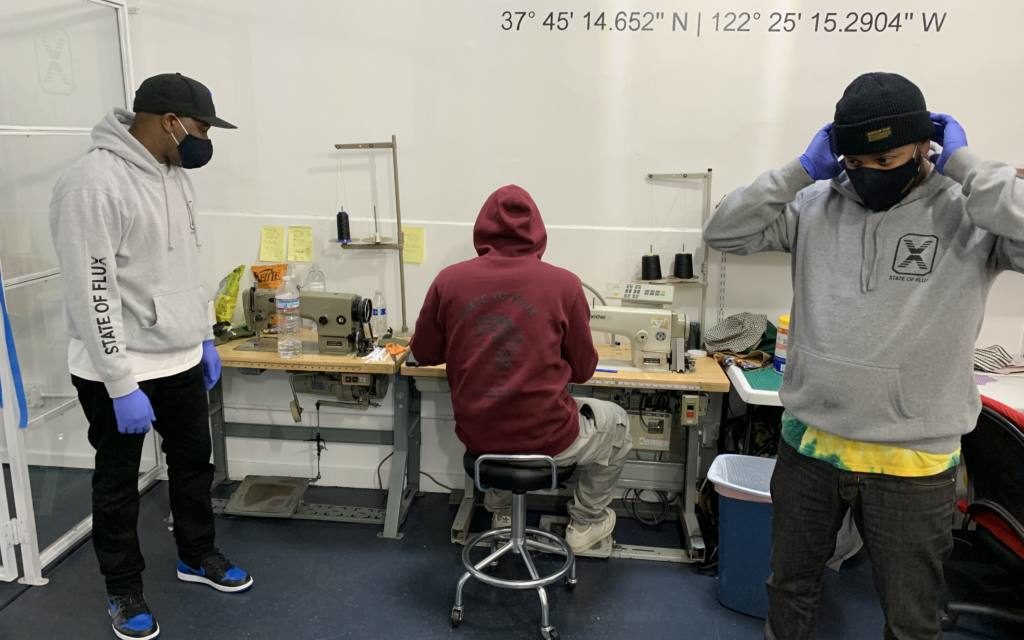 Johnny Travis, left, and Herbert Gracia have pivoted to making face masks through their apparel line State of Flux. Photo by Julian Mark

The moment federal small business payroll assistance became available on April 3, Anthony Strong, the owner and chef at Prairie, stopped everything he was doing and applied for it.

“I still haven’t heard back from my bank” on whether he’ll be getting help, he said.

Instead, the bank — which is administering the payroll loans — told him to reapply on its newly crafted online portal. And, well, Strong is going to try that as well. “At this point, I’m saying — I have no idea what’s going on,” he said.

Strong’s experience is shared by many San Francisco small business owners who desperately need government aid as they’ve watched their revenue plummet. None we spoke with has seen a dime.

Indeed, the Small Business Association announced Thursday that its $349 billion “Payroll Protection Program,” which provides forgivable loans to businesses that keep employees on staff, is now depleted of funds. Although Congress is working to expand the program and replenish the fund with $250 billion, no agreement has been made.

But many business owners, like Strong and others Mission Local spoke to, are carrying on as though it may never arrive — pivoting in the new landscape and using their grit to keep the lights on, pay some employees, and put food on the table.

Just as the shelter-in-place went into effect, Strong completely transformed his 19th Street restaurant into a “general store” where people can order staples online and pick them up. With federal assistance, however, Strong said he could pick up a few more employees to make deliveries and expand the operation.

“I think all the banks are bogged down,” he said, “And at this point, I can’t tell if we’re in the running, which is kind of scary.”

Paula Tejeda, who is still operating her empanada restaurant Chile Lindo, is also applying for all the assistance she can get. When they became available last month, she applied for the federal Small Business Administration’s “economic injury disaster loan advance.” This is basically a $10,000 grant that would be made immediately available if accepted, but that fund has also run dry. Tejeda, like Strong, said she also plans to apply for the presently unavailable payroll protection loans, but remained wary.

“You really think we can take on one more application and one more form when we are literally barely coming up for air trying to keep things somehow functional?” she said, frustrated.

Applying, indeed, may feel like a fool’s errand, especially with the payroll protection program. In the first round of funding, banks like Wells Fargo and Bank of America limited the number of applicants. To apply with Bank of America, for example, you must have already borrowed from the bank. Wells Fargo initially allowed businesses only to “express interest” in receiving the loans — even encouraging applicants to seek out other banks “apply elsewhere to increase your chances of receiving a loan before the funds run out.”

Those funds eventually did run out, and it was clear few small businesses received them. Only 112,976 loans totaling a whopping $33.4 billion were approved in California, according to an analysis by Bloomberg.

None of the businesses Mission Local spoke with received the payroll assistance.

“What we saw in the first round was that companies that had existing relationships with banks were going to the head of the line, because the banks had discretion over who they wanted to process,” said Rep. Ro Khanna, D-Fremont, at a press conference hosted by Ethnic Media Services on Friday. “If you were a mom-and-pop restaurant or dry cleaner and didn’t have a relationship of priority with an existing banker, you were having a very hard time getting those loans.”

He and other Democratic lawmakers, he said, were pushing to get the additional $250 billion, currently being fought over in Congress for the plan’s expansion, toward smaller, mom-and-pop businesses.

Nevertheless, Tejeda will be able to pay her bills this month. While she can only manage to sell a cup of coffee some days from her booth on 16th Street, she’s used a network she’s built over the years to make empanada deliveries outside of the city.

“I’m so overwhelmed and couldn’t continue taking orders,” she said.

Likewise, the owners of the Valencia Street apparel store State of Flux — while having applied for a collage of loans — has pivoted to making washable face masks, which they are both selling online and donating to neighbors. That business may soon take off, as Mayor London Breed is now requiring people to wear face masks at “essential businesses, in public facilities, on transit, and while performing essential work.”

On a recent afternoon, the sewing machines were chirping away as two of the shop’s employees sewed masks to be shipped out. “We have a staff of four,” said co-owner Johnny Travis. “We want to make sure, if we can, we can retain them.”

He said the masks have helped him do that. “With the masks and the demand, we’ve been here for days on end … it’s like an assembly line,” he said.

As for whether the federal government will deliver, “if it comes in — great — and we will work with it, Travis said, ”but if it doesn’t, I’m not depending on that money to come in.”

Armando Macuil, the owner La Torta Gorda on 24th Street, is also seeking out assistance from the government and, like the others, is skeptical. “I know there’s a lot of businesses applying for that,” he said, “but we need it right away.”

Macuil said sales have continued to hover at around 40 to 45 percent of normal, and he’ll be able to pay rent this month. To keep staff on board, he finds hours for them wherever he can, while cutting down on expenses. He’s using less water and has reduced the size of waste bins, while also drawing from his savings account.

“The good thing about owning a restaurant is, we don’t have to worry about food,” he said. “It’s a blessing that we own a restaurant. We have breakfast, lunch, and dinner.”