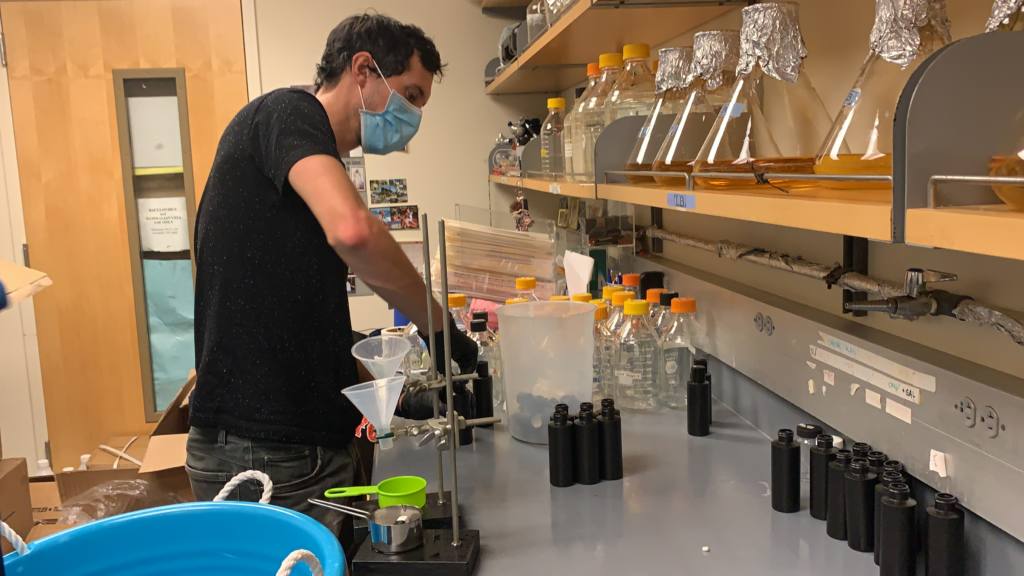 The Shokat Lab at UC San Francisco’s Genentech Hall in Mission Bay is ordinarily a hive of scientists working to develop cancer therapies. But since the coronavirus pandemic shut down most “non-essential” research at the sprawling facility, the usual activity here has all but halted.

To date, more than 200 gallons have been produced here, and the majority of it will soon be in the hands of thousands of inmates at several California jails and prisons, said Elina Kostyanovksaya, a UCSF graduate student of biology and a member of the Science Policy Group at the university. 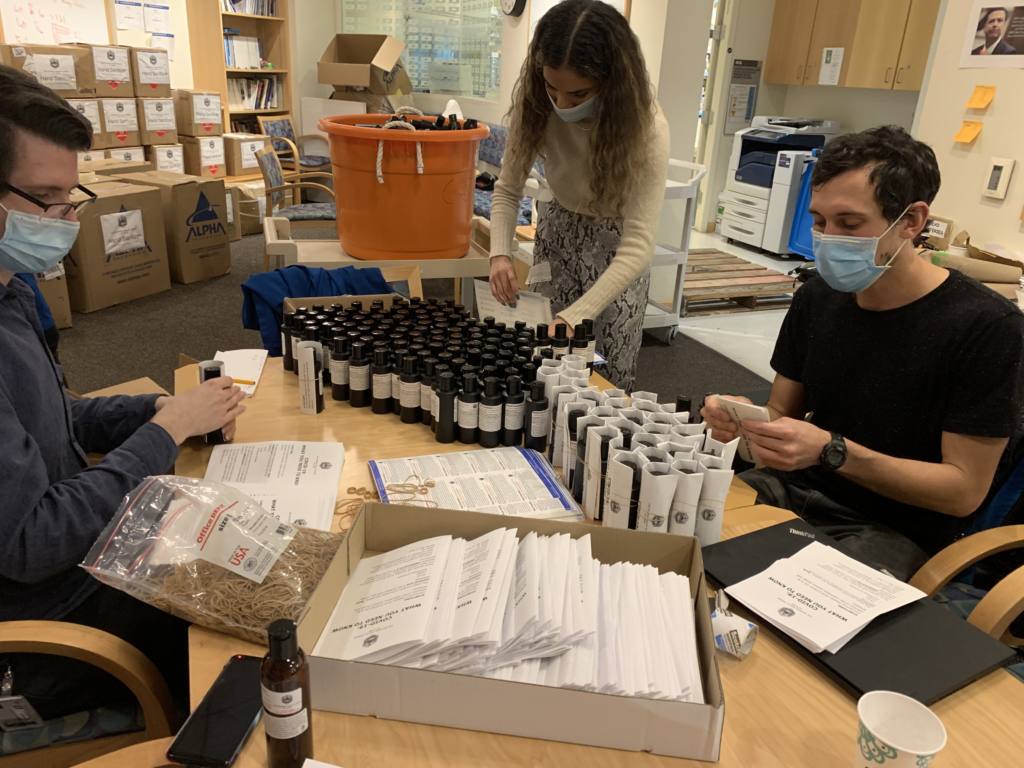 Students say bottling and labeling the sanitizer is the hardest part. Photo by Julian Mark.

Jamal Trulove, who spent seven years incarcerated after being falsely convicted of killing his best friend, is helping the UCSF students make the sanitizer and distribute it. Prisons will become “death pools,” he said, “if COVID-19 was to hit these prison and jail populations.”

On Tuesday, a hand sanitizer assembly line was set up in the lab. Kostyanovksaya poured mass quantities of 190-proof ethanol into a giant vat, mixing in a cocktail of glycerol, isopropanol, and hydrogen peroxide.

“Actually mixing the stuff together is not the hard part,” said Jack Stevenson, biochemistry graduate student and a member of the group. “The hard part is definitely just the labor — just filling bottles, capping bottles, labeling bottles, pamphleting bottles, which, you know, anybody can do.”

Most of the group members spent time doing exactly that.

The group successfully delivered 4,000 bottles, or 125 gallons, of their hand sanitizer on Tuesday to San Quentin, which currently has a population of 3,888 inmates and presently no confirmed COVID-19 cases, according to Dana Simas, a California Department of Corrections and Rehabilitation spokeswoman — though six staffers at the prison have tested positive.

Simas did say that the prison has been providing hand sanitizer to the inmate population since March — “dispensers have been placed inside institution dining halls, work change areas, housing units, and where sinks/soap are not immediately available,” she wrote in an email.

But “we sincerely thank them for the supplies,” she wrote, referring to the UCSF policy group. 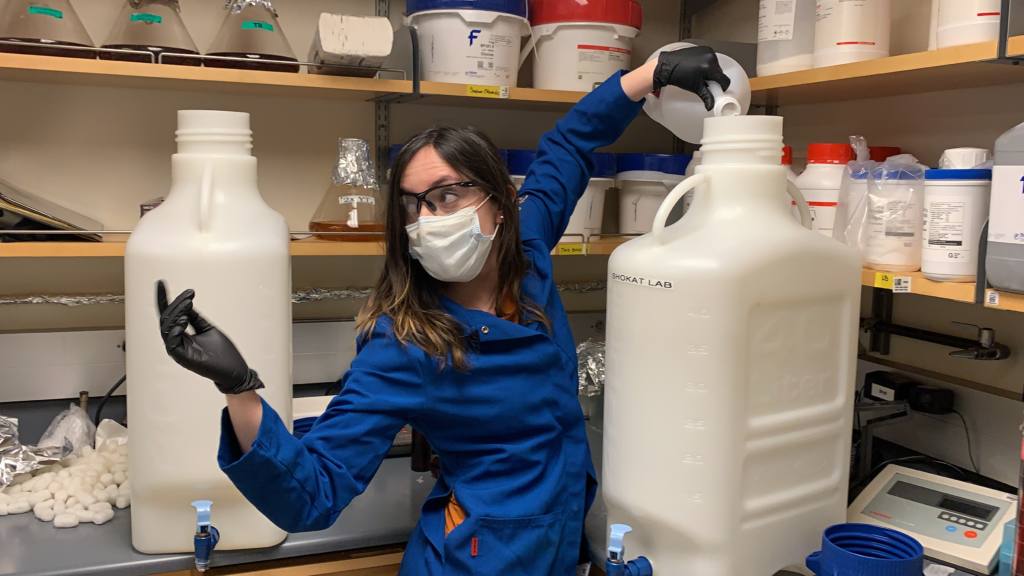 The group’s deliveries did not stop at San Quentin. They also delivered 500 bottles to Maguire Correctional Facility and the Maple Street Correctional Center in San Mateo County. Nine-hundred bottles have been given to San Francisco County Jail.

Anther 4,000 bottles of the sanitizer have or will soon be delivered to nearby county jails, and 2,600 bottles are on their way to underserved communities in San Francisco’s southeastern neighborhoods, as well as homeless individuals and shelter workers, Kostyanovksaya said. Trulove on Monday handed out more than 600 bottles and face masks to residents at the Sunnydale and Oakdale housing projects.

Each bottle contains four ounces of hand sanitizer, with a label that lists COVID-19 symptoms as well as a fact sheet on precautionary habits one can undertake to prevent spreading the disease (wash your hands and don’t touch your face, to name two). The words “not safe for consumption” are also on the label, as prisoners potentially drinking the alcohol-based sanitizer has been an ongoing concern.

Trulove doesn’t believe this concern is warranted. If he were still an inmate and knew the severity of the coronavirus, especially in a congregate living situation, he said, “there’s not a thought in my mind that I’m gonna drink some hand sanitizer.”

Though they have received some grants, much of the efforts have been on the group’s dime (some members have put thousands on their credit cards), and are seeking donations through a GoFundMe campaign.

In spite of the extreme effort, Kostyanovksaya said the hand sanitizer is only a “stopgap” measure to prevent the disease’s transmission in prisons and jails. “Reducing the density in jails and prisons is really the only way to make them safer,” she said.

Those efforts are underway, as 3,500 California prison inmates have been released — though advocates say it’s not enough. Lawyers representing swaths of inmates asked a panel of federal judges to order the release of a significant number of prisoners to allow for social distancing, but that was denied on April 4. The lawyers refiled four days later.

So, it may take time.

“Hand sanitizer is a good start,” Kostyanovksaya said. “But it’s not the real long-term solution.”

Update, 4/24: Kostyanovksaya said she’s received many inquires as a result of this article. If you’d like to contact her, you can reach her at elina.kostyanovskaya@ucsf.edu. 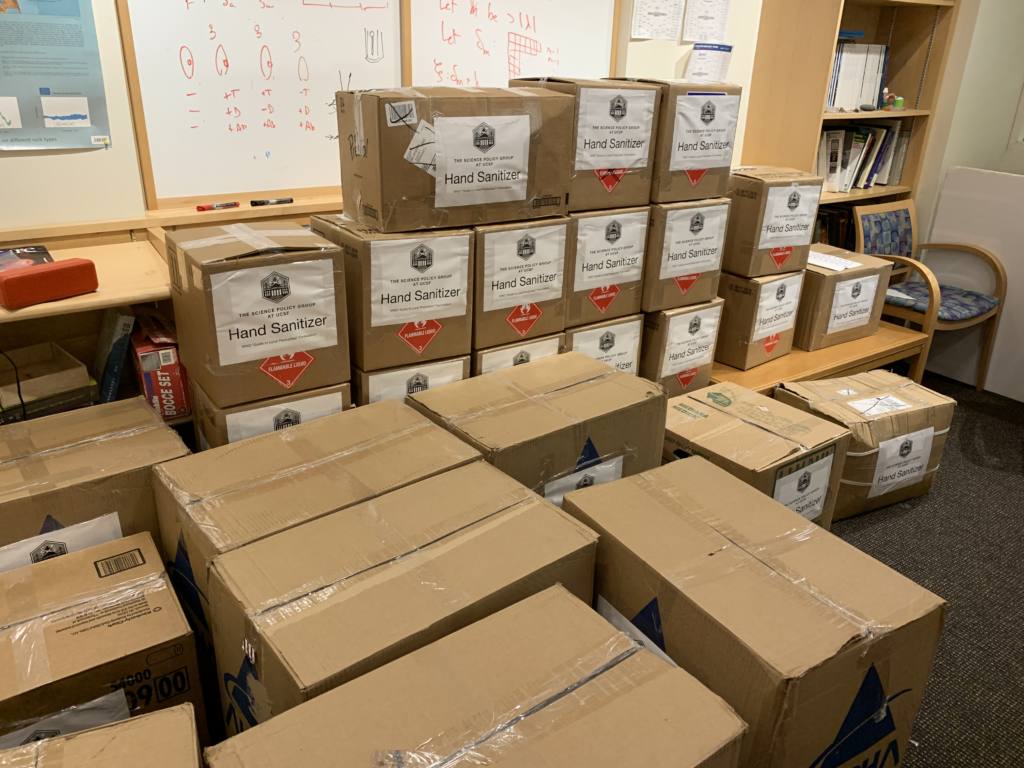 These boxes are filled with hand sanitizer bottles and delivered to San Quentin Wednesday. Photo by Julian Mark. 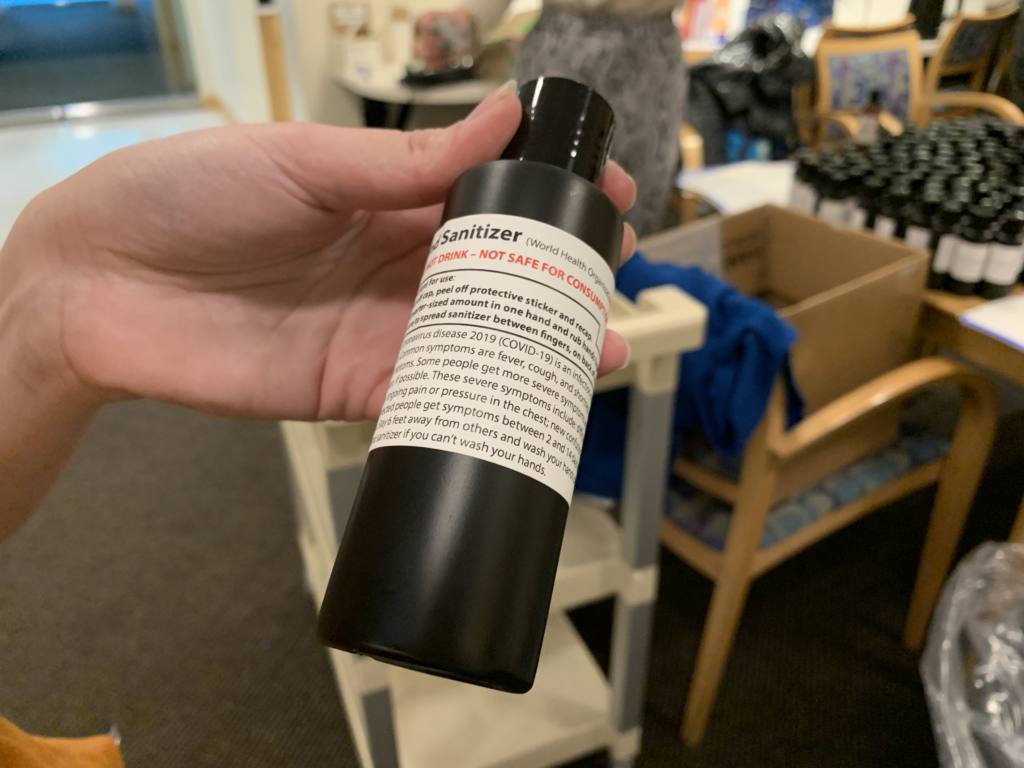 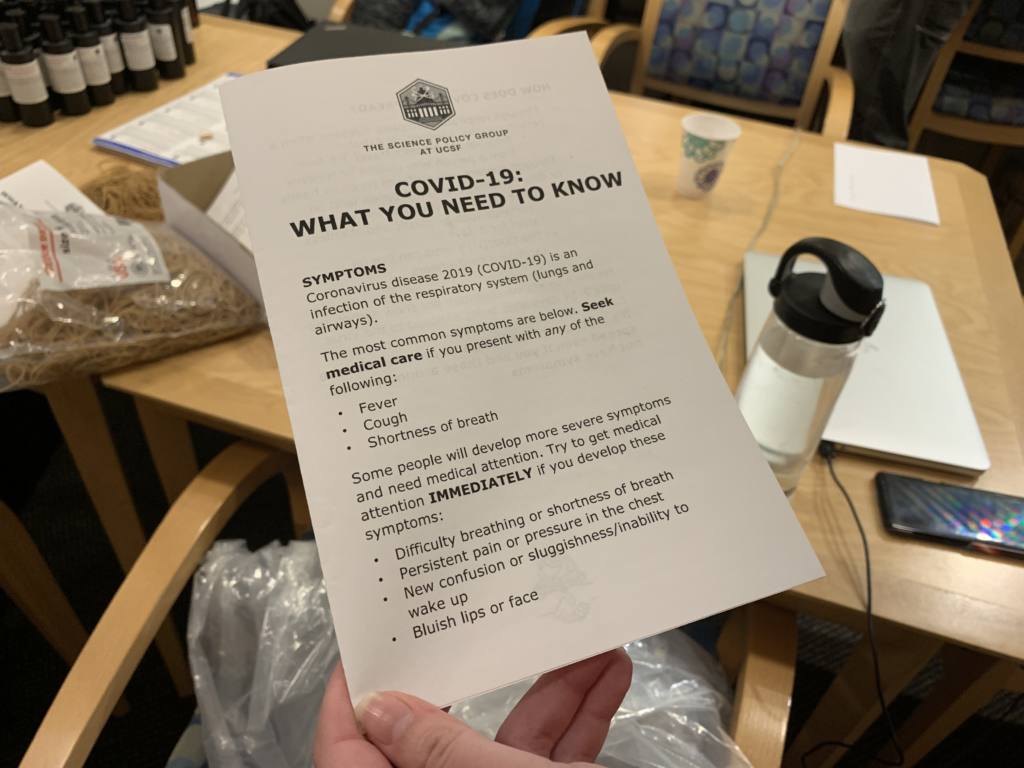 Some bottles get pamphlets with more COVID-19 information. Photo by Julian Mark. 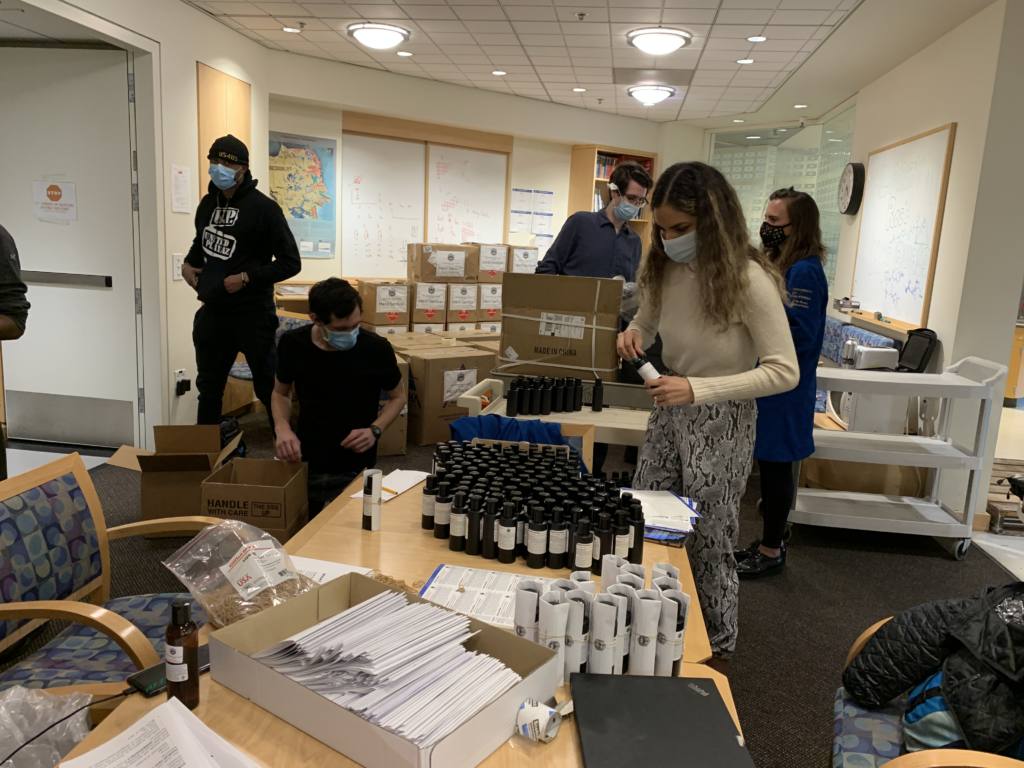 Life at the Shokat lab looks a bit different these days. Photo by Julian Mark. 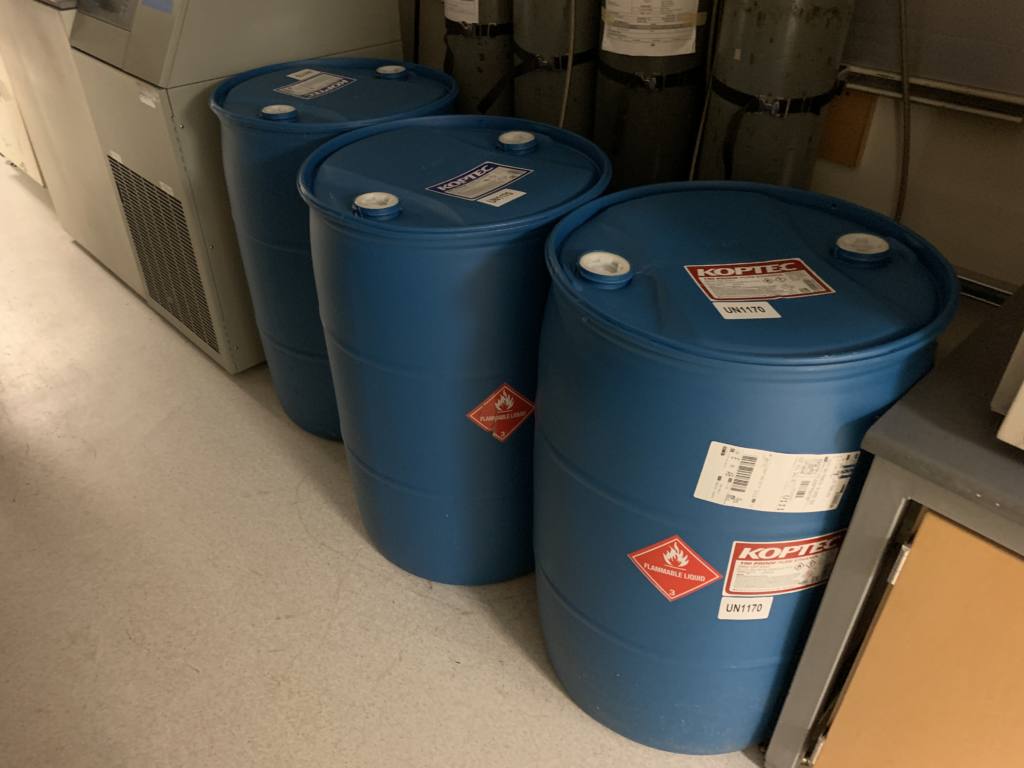 That’s a lot of ethanol! Photo by Julian Mark.