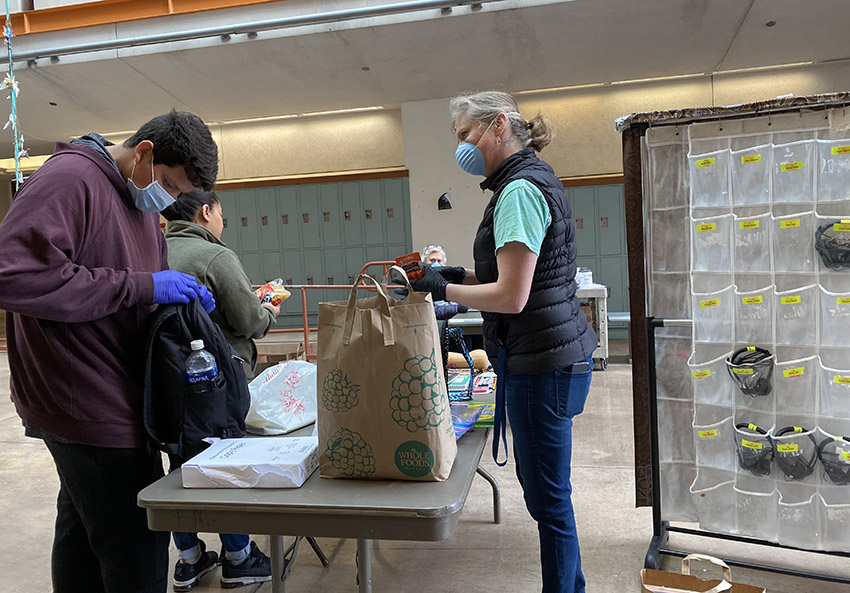 As students learned today that San Francisco Public Schools would be closed until at least May 1, it also became clear just how wide the digital divide cleaves in a city where the economy has been fueled and forever changed by the tech boom.

That divide was in plain view on Wednesday morning at John O’Connell High School.

Students who arrived to pick up a Chromebook for assignments generally had no computer at home. Moreover, many had yet to set up access to WiFi. Principal Susan Ryan remained concerned that some would not be able to access free wireless internet.

“There is a huge digital divide,” said Ryan, who was at the school on Wednesday, handing out the Chrome books and consoling students about the extension of the closure. “But we have the computers to hand out and now the bigger problem is internet access.”

Internet providers appeared to be stepping up.

Comcast, Spectrum and other internet providers are offering some free access and, indeed, one of the John O’Connell parents had already signed up before coming with her daughter to pick up the computer.

At times it can seem that everyone in San Francisco has a laptop — but by 11:30 a.m. Wednesday, more than 100 students who did not came to John O’Connell to pick one up.

Pete Wolfgram, a counselor, said they were likely to give out 200 to 250 computers by the end of the day.

In announcing the extended closure today, the school district said it had started to hand out loan computers this week, adding that teachers “are preparing both non-digital and digital learning options” with a fuller approach coming by April 13. It posted no schedule of when each school would begin distributing the Chromebooks but is posting updates on its site.

It’s unclear just how many SFUSD students have no computer at home. A San Francisco County 2019 digital strategy report, noted that “1 in 7 families in public school lack a computer connected to the Internet at home.”

A 2012 survey asked SFUSD teachers asked what kept them from using technology and 72 percent said they did not because “not all of my students have access to reliable technology at home.”

Roberto, a senior at John O’Connell, was a case in point. He has no computer at home and was happy to pick up a Chromebook this morning. Nonetheless, he still had to figure out how to get wifi service in Oakland. He’s hoping to look into a hotspot.

Crystal Barbaro was at John O’Connell with her two daughters. Even before coming to pick up the computers, she said, she had signed up for free internet with Comcast. Up until now, she said, her daughters have not been able to do their homework.

Christine Mac-Joyner who came with her daughter from Bayview, said they were relieved to get the computer for her 15-year-old daughter. Now, she said, all they have to do is find some toilet paper.