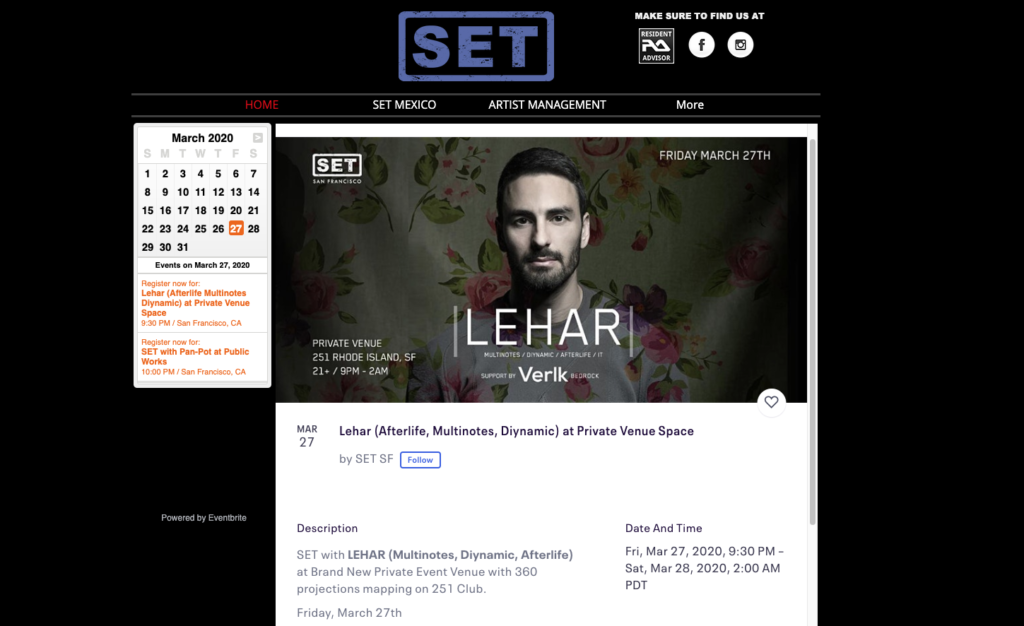 A club at 251 Rhode Island St. apparently thought it could ignore the city and state’s shelter-in-place order — or it was scamming people into paying for tickets for a 200-person dance party scheduled for this weekend that organizers knew would not happen.

That’s according to City Attorney Dennis Herrera, who is taking steps to shut down the illegal dance party hosted by promoter Set San Francisco at the Rhode Island Street venue. The ticket prices reached as high as $780 with about 200 tickets available.

The musician to play was Lehar. “As you may notice while listening to Lehar’s music compositions,” the advertisement reads, “intuition and emotion are the basis of his creative process, finally resulting in a near impromptu.”

These impromptu emotions will have to wait, as there’s a global pandemic killing thousands of people.

As of early Wednesday morning, the tickets were still available for purchase, according to the City Attorney. But tickets have since become unavailable. It’s unclear how many were sold and if money would be refunded. A message left with 251 Rhode Island was not immediately returned.

“The individuals behind this party have either completely failed in their responsibility to the public, are engaged in a cynical scheme to rip off people knowing this event will never happen … “ Herrera said in a press release.

On Tuesday, Herrera sent a letter to 251 Rhode Island owner Carol Chiarelli, whose property is the site of a club called “251 Rhode Island,” reminding the landlord that hosting a party of 200 directly contravenes the shelter-in-place order issued on March 17. It restricts any gathering outside of a single-family unit and carries a misdemeanor charge with a fine up to $1,000, a year in jail — or both.

The City Attorney’s office noted that “representations have been made” to the San Francisco Police Department that the party was canceled — yet tickets were still being sold on Wednesday morning. Again, tickets are no longer available.

SFPD Chief Bill Scott said that most businesses in San Francisco have been dutifully following the shelter-in-place order. “Unfortunately, it appears there may be scofflaws who either don’t know or don’t care,” he said.

Update, 1:50 p.m.: The City Attorney received a response from the property owner of 251 Rhode Island. “We’re pleased this event is now canceled and tickets are no longer being marketed or sold,” said City Attorney spokesman John Coté in an email. “We will continue to monitor the property to confirm that the event will not take place. We are in the midst of a pandemic, and everyone needs to follow the directives of public health officials.”