Apocalypse Chic: Valencia Street businesses board up their windows 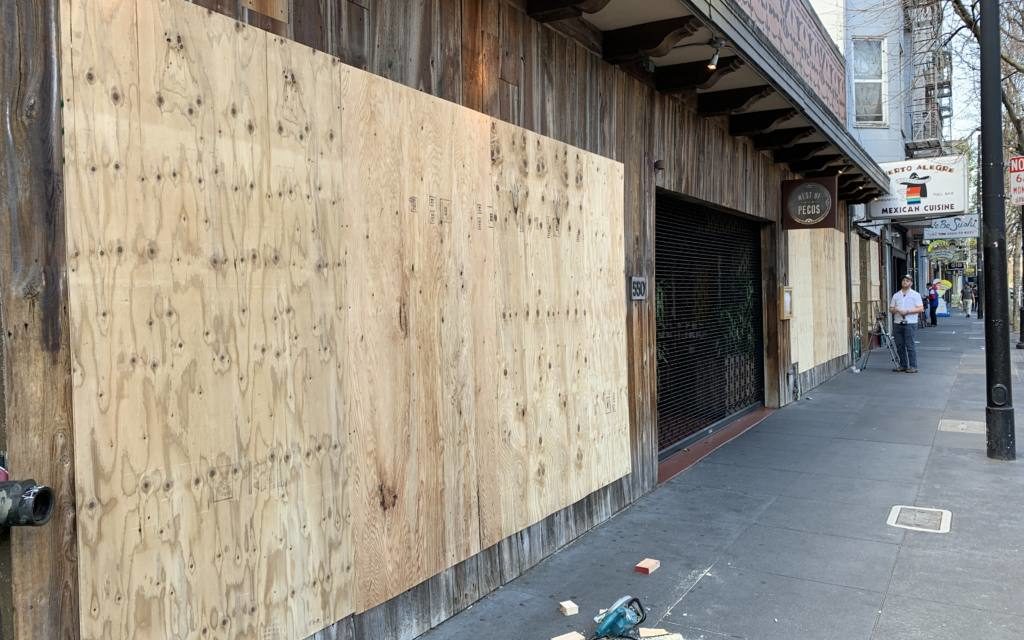 West of Pecos held out as long as they could. Photo by Julian Mark

As if the past week hasn’t felt apocalyptic enough, dormant businesses along Valencia Street and elsewhere in the Mission have begun to place wooden boards over their windows, as though preparing for a hurricane or riots.

“We actually don’t want to do it,” said Dylan MacNiven, the owner of West of Pecos. “I don’t think it’s good for the public to see this, but now that everyone else has done it, we’re going to be the only one on the street without it.”

MacNiven was in the process of placing the final boards on his windows on Thursday afternoon, and he said the bar and restaurant was hesitant — but then a multitude of surrounding businesses had done the same. It started with Stonemill Matcha, he said.

“And Puerto Alegre saw them doing it, so they did it … and then Locanda … and then a few more down there,” he said. 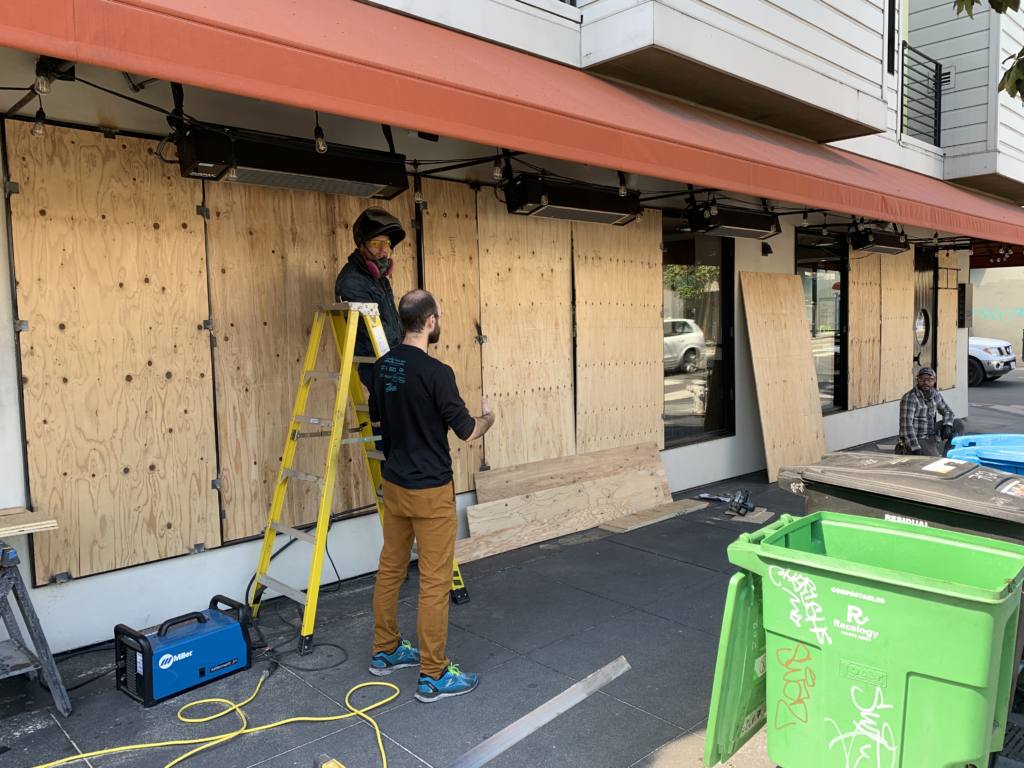 Flower + Water was welding the boards to its windows on Thursday afternoon. Photo by Julian Mark.

The majority of businesses on Valencia and Mission streets have closed their doors until the “shelter in place” order lifts on April 7. Some businesses, like the Italian seafood restaurant Locanda, have shuttered for good.

“Just as an extra precaution,” wrote Annie Stoll, the owner of Locanda and Italian restaurant Delfina, when asked about the boards over her shuttered restaurant.

Stonemill Matcha, meanwhile, does not appear to be closing. Floor manager Lorilynn Rice told Mission Local Wednesday that the tea house boarded up its windows “so when we come back, it’s in the same condition.”

“We’re doing it so we can sleep at night,” said Needles and Pens owner Breezy Culbertson.

Culbertson said she will be out $300 to board the windows. Just one of their front windows would cost $2,000 to replace. “It’s a bummer because it feels like it is bad for morale,” said a man named Scott who was helping Culbertson install the boards. 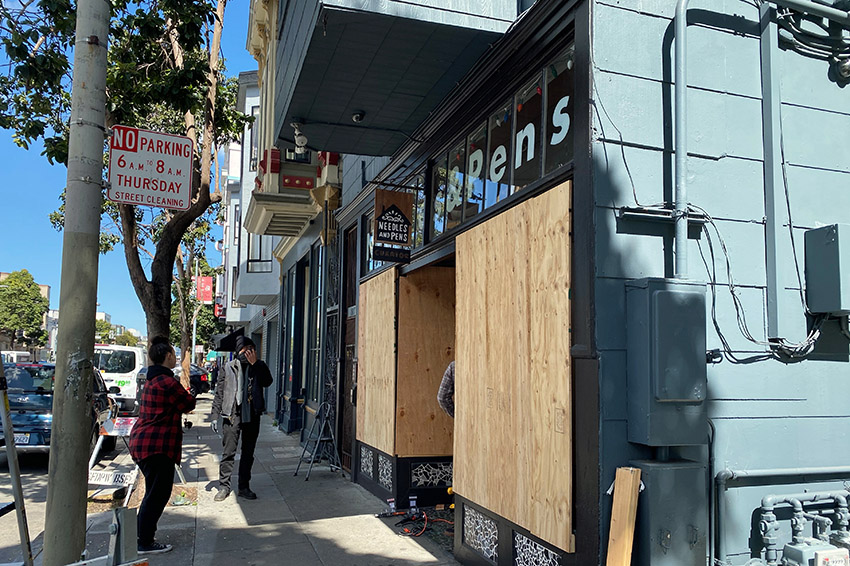 Workes at Needles and Pens on Thursday at noon. Photo by Lydia Chávez.

Paul Pace was parked in front of the boarded-up Lolo restaurant on Valencia and 21st on Thursday afternoon, waiting for his lunch to arrive from Señor Sisig. He said he manages a bar in the Tenderloin, though he declined to say which one. He did say, however, that he decided not to put boards up — for now, at least.

“A lot of people are putting the boards up now because they’re afraid lumber is going to skyrocket,” he said. “Everyone’s got the same panic from the toilet paper scenario.”

MacNiven said the price is still low. “These are $20 apiece, the same as they were last week,” he said.

‘There is no retail’

While some restaurants and coffee shops at least have had the option to stay open, small retailers — which are considered “non-essential” — have closed and will suffer.

“All of this is so stressful — our whole livelihood is at stake,” said Culbertson, who added that she has yet to decide on what to do with her six employees.

Culbertson encouraged people to buy online. Most of the producers are, like Needles and Pens, local. When asked how retail was doing, she said bluntly, “There is no retail.”

Across the street at State of Flux, which opened six months to the day last September, the story was the same. “The store is the bulk of our business,” said co-owner Johnny Travis.

He said State of Flux is transitioning to online sales, but right now orders have been “only a few here and there.” He encouraged people to visit the store’s website and shop online. 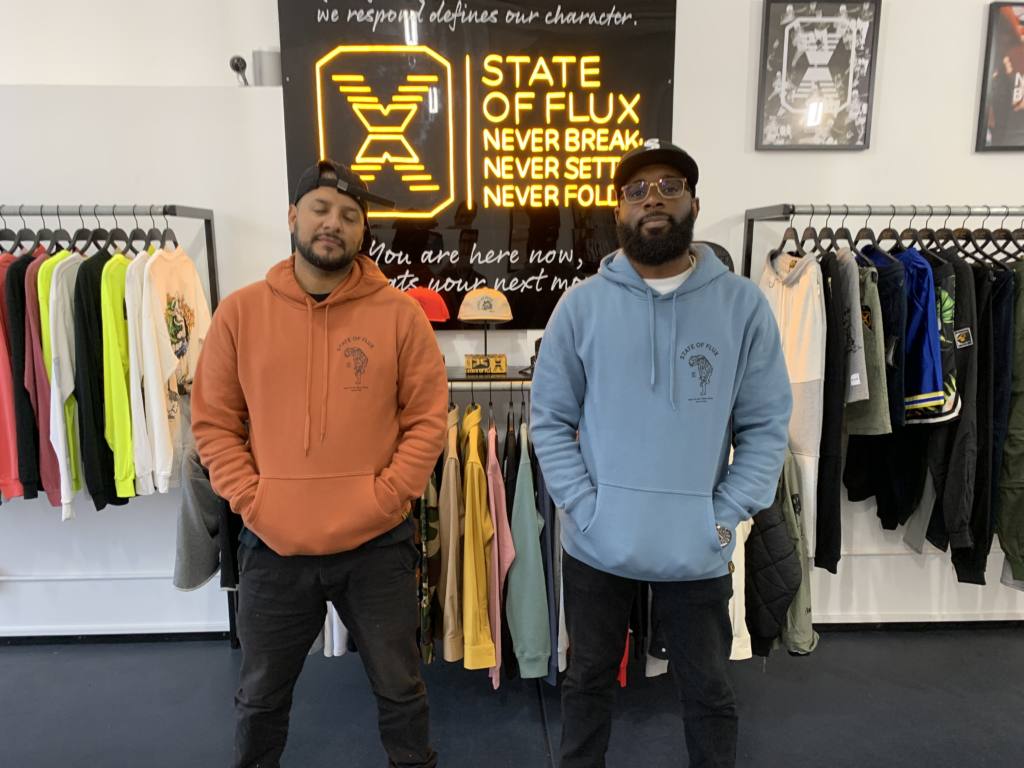 Herbert Gracia, left, and Johnny Travis always find themselves in a “state of flux.” Photo by Julian Mark.

For now, Travis and his business partner, Herbert Gracia, have continued to pay their two employees. And they remain optimistic.

“You can sit here and stress about it, but this is something we can’t really control,” Travis said. “The only thing we can do is set ourselves up and do the best we can and do what’s in our power — and push for it.”

Sean Quigley, the owner of Paxton Gate, has a grimmer outlook. He said he’s currently researching how to successfully scale back his operations and get by without “my temporarily unemployed staff.”

“At some point I suppose I also need to apply for unemployment myself,” he wrote in an email.

Quigley said the mayor’s halting of commercial evictions is acceptable for the time being. “… but what happens when we/if [we] reopen? Do we owe two or three months of back rent to our landlord? Did our landlord miss mortgage payments because we couldn’t pay rent?”

“It’s time for San Francisco to step up and lead the nation on how to keep our city from spiraling into a deep recession,” he wrote. 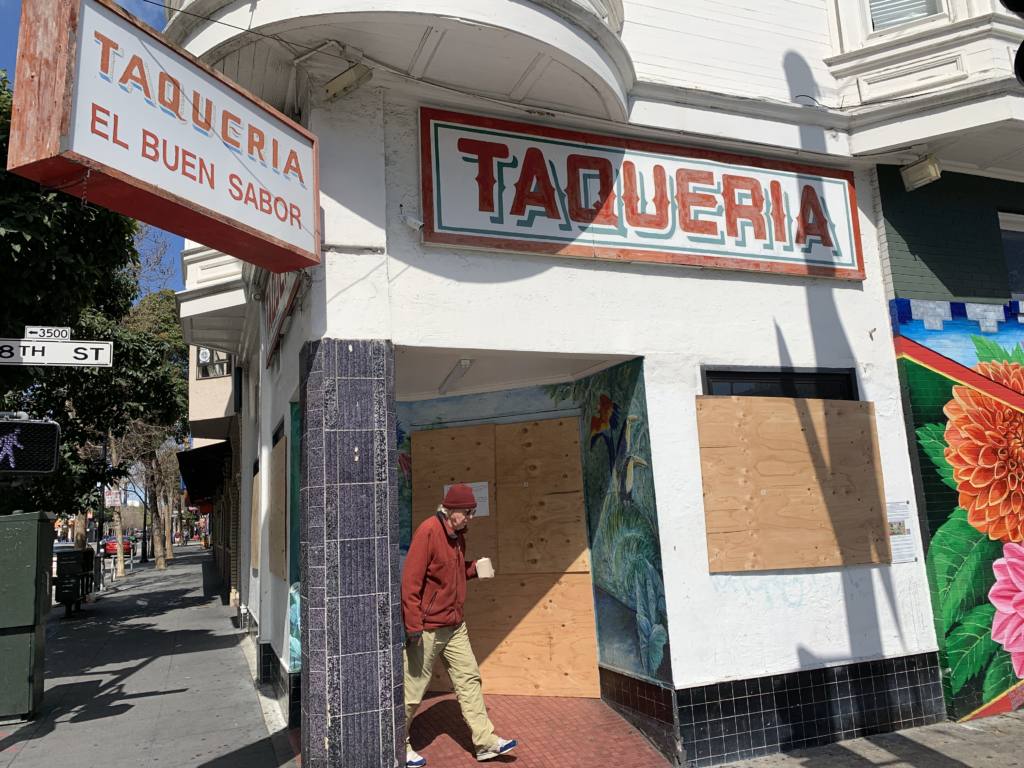 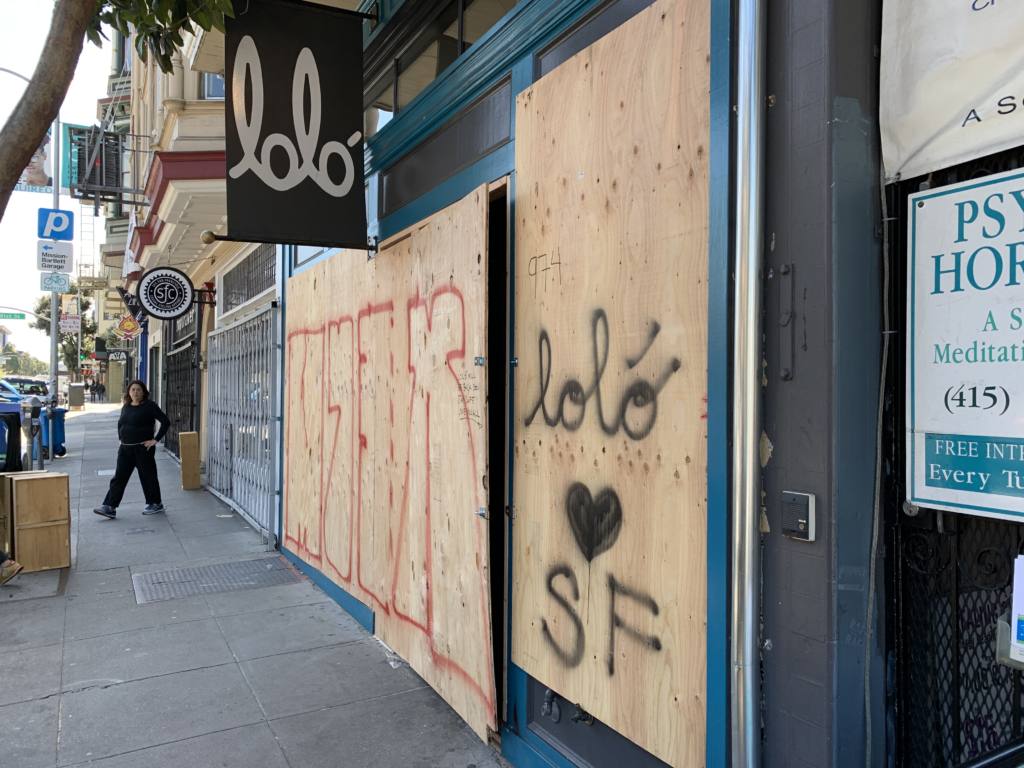 Lolo at 21st and Valencia. Photo by Julian Mark. 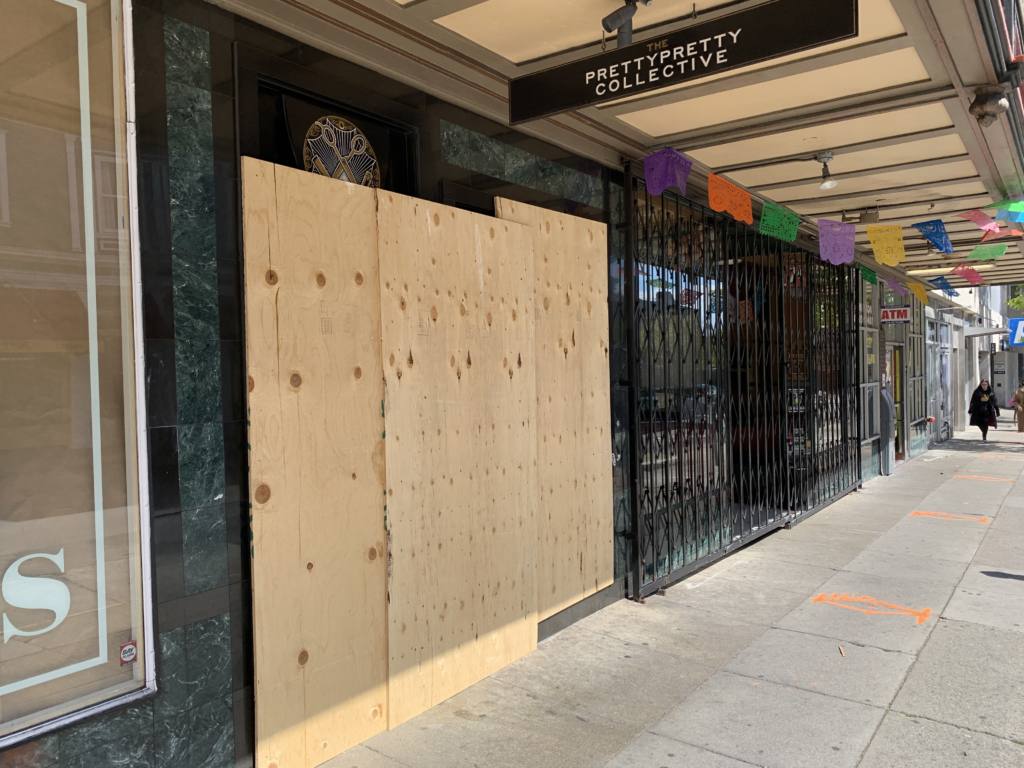 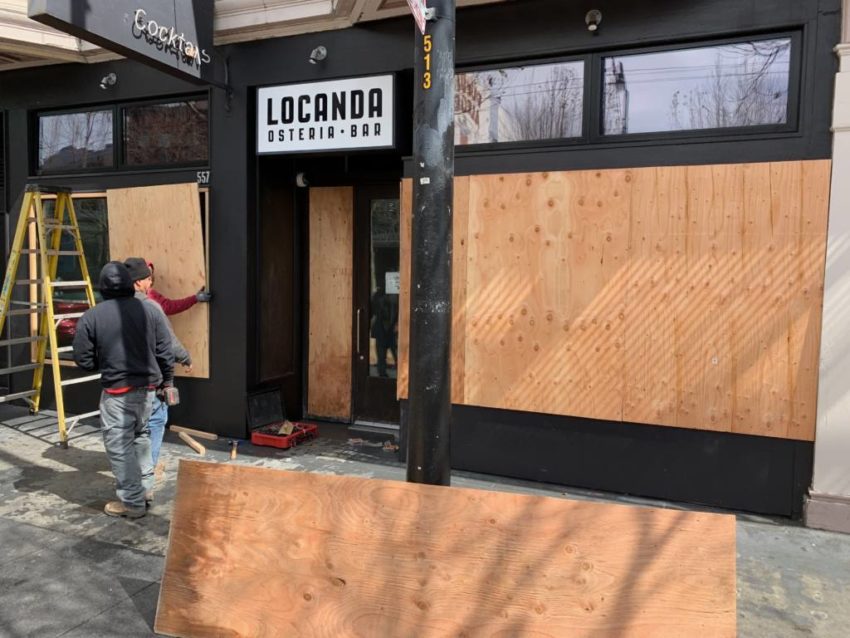 Locanda too boarded up its windows on Wednesday afternoon. Photo by Julian Mark. 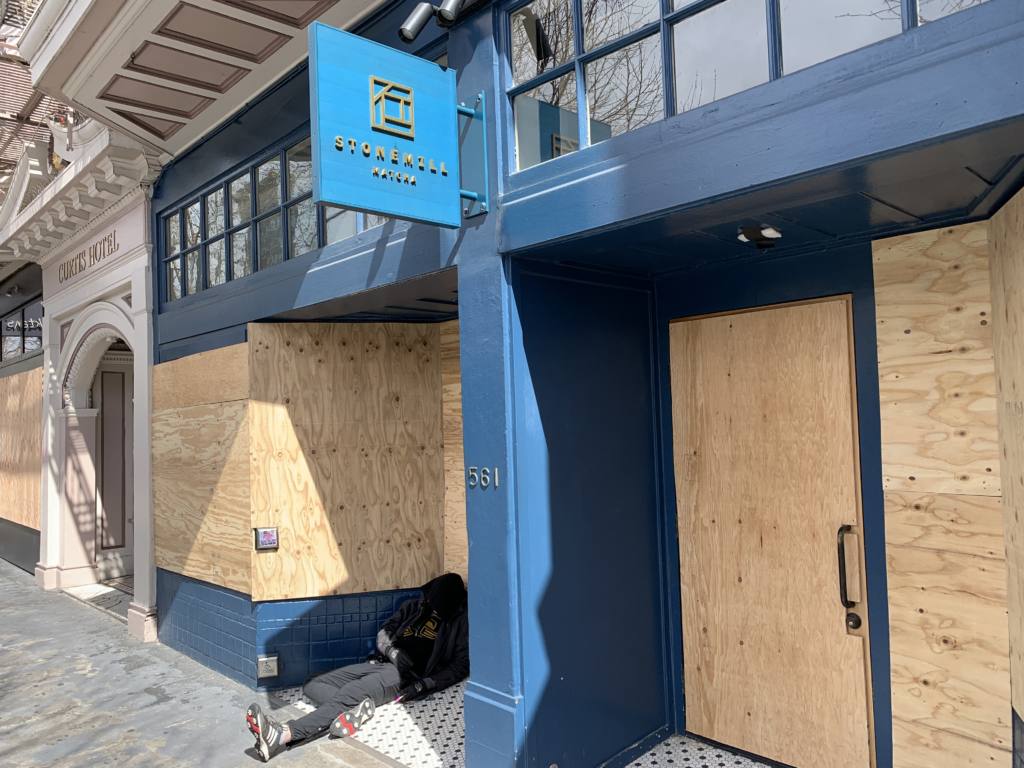 Stonemill Matcha has boarded up its windows for protection while it temporarily remains closed. Photo by Julian Mark.

For the Crepe House, the coronavirus was the “last nail in the coffin.” Courtesy of Shar Haddadin.