‘Yes, they could shut down this city’: Ruling clears path for San Francisco city workers to strike L’affaire Mohammed Nuru, like an earthquake, was both destructive and predictable. It’s pretty much all that anyone at City Hall could think about last week (“Please talk into my lapel pin,” was a joke that induced nervous laughter when addressing public officials).

So, a lot of folks in City Hall were blessedly unaware of a Public Employment Relations Board (PERB) ruling that began hitting local desks on Jan. 21 — the same day FBI agents arrested Nuru (for the first time).

A 66-page ruling blending the tedious chocolate of state employment law with the impenetrable peanut butter of parsing San Francisco’s voluminous City Charter does not make for straightforward reading. There’s a lot in here. But, in the briefest summation, a clear path has been established for this city’s unionized workforce to credibly threaten to strike, something we haven’t seen since the 1970s — and do it.

“Yes,” concurred a knowledgeable city source who did see the January ruling. “They could shut down the city.” 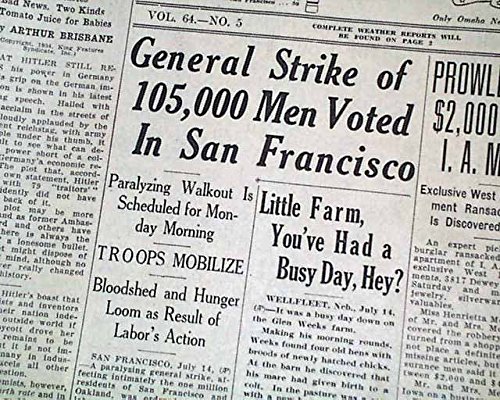 In these frenetic times, it’s easy to ignore the PERB ruling and its ramifications — which city sources tell me are “extremely significant.”

Workers are incensed by Mayor London Breed’s call for 3.5 percent budget cuts across the board for the next two years — but they won’t be walking out tomorrow. Yet, when the time comes, this ruling will allow them to channel that discontent into real leverage.

The balance of power in labor-management relations has shifted, and the theory of deterrence will soon be tested.

Here’s our best shot at gleaning the gold dust out of 66 pages of legal arcana. In this city, prior to this ruling, unions were required to finalize contract negotiations by May 15 — or their members were locked out of receiving any enhancements in wages or benefits for a year.

This was, in effect, a nigh-invulnerable barrier for any union that would hope to opt out of binding arbitration and take its chances with a strike; when losing out on wage and benefit increases for an entire year is the minimum buy-in before you’ve even started, a strike just ain’t worth it. Better to be steered toward arbitration.

But January’s ruling shifts this dynamic. Now, instead of having to have things done and done by May 15, a  place-holding document can be submitted instead. A document that’s essentially as meaningful or meaningless as the unions want it to be.

And then money and whatnot can get argued over and allocated later.

“In effect,” confirms John Stead-Mendez, the executive director of the Service Employees International Union Local 1021, “the May 15 deadline is now meaningless.” Your humble narrator has written before about the unconscious decoupling of memories that must be undertaken to pine for San Francisco in the 1970s. There were tight-knit communities and affordable neighborhoods but there was also pollution and crime and violence and chaos on a level not conceivable in the present day.

Municipal workers going on strike — including public safety workers — were part of that chaos. For good or ill, much else that defined the ’70s — domestic terrorist cells blowing stuff up, polyester Giants uniforms, gunfire in City Hall — is a quickly receding memory. But we may have those walkouts again.

Union leaders are thrilled to have this weapon back in their arsenal. But it may not work entirely as intended.

Those detested deadlines forced everyone in this sclerotic city to get things done. Take that away and we may be faced with a litany of meaningless deadlines blown, expired contracts staying in place, and a perpetual state of bargaining. In such a scenario, the city might even come out ahead, as workers continue to toil under expired contracts for weeks or months.

Unless, of course, they go out on strike.

And since it seems this city’s wealth and its goodwill between labor and management are conversely related, that’s a healthy possibility.

While Breed is pushing for those 3.5 percent cuts, analysis by city unions indicates that this city has, for years, earned well more than it projected it would — and that city revenue is still outpacing expenditures, to the tune of billions. The city, in Stead-Mendez’s words, continues to “cry poor” while being stinking rich.

“The revenue is coming in. But instead of dedicating revenue to deal with this, the mayor is sending out budget instructions to do the opposite,” Stead-Mendez complains. “At some point, this is immoral.”

In the coming months and years, Stead-Mendez plans to ask questions about all this during bargaining sessions.

If the answers are not to his liking, he now has options at his disposal that he did not have before.